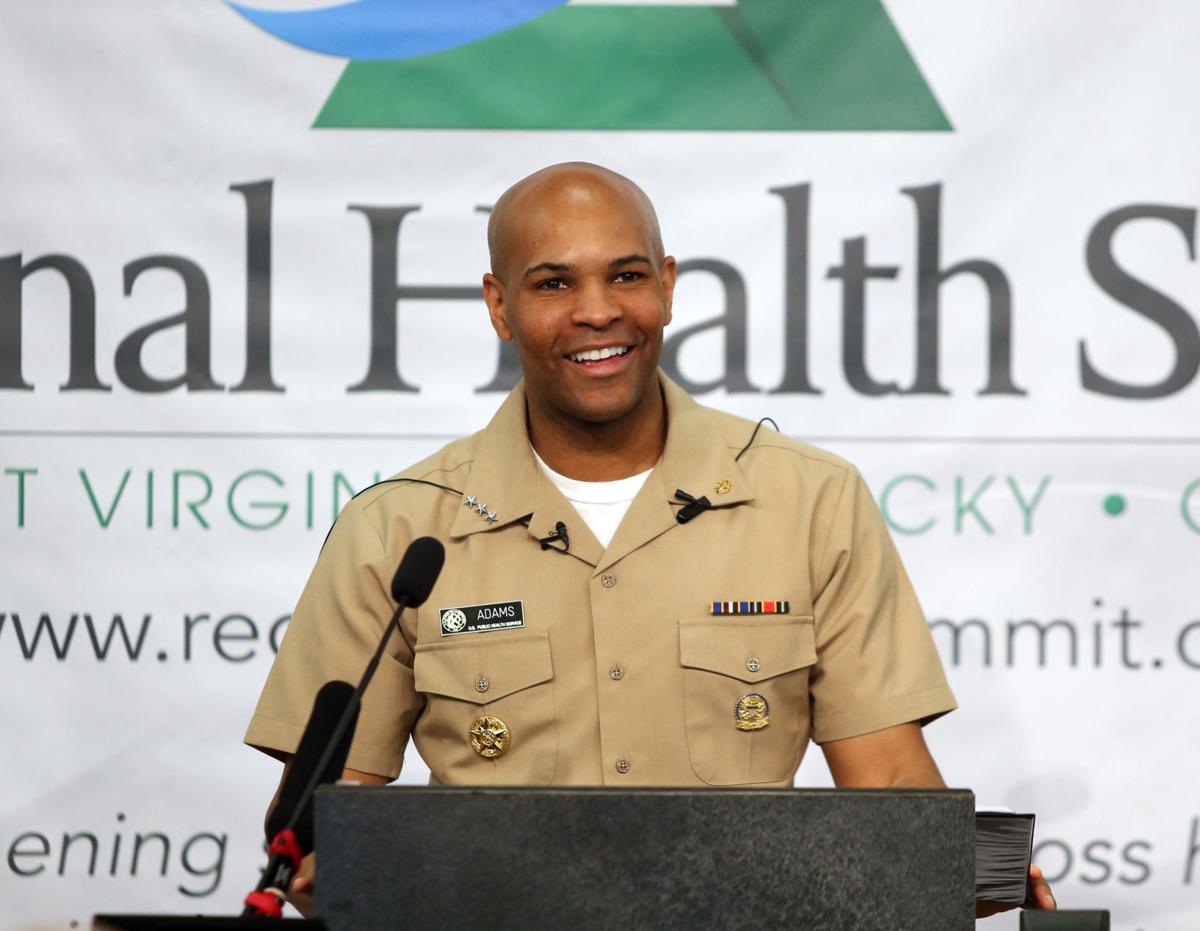 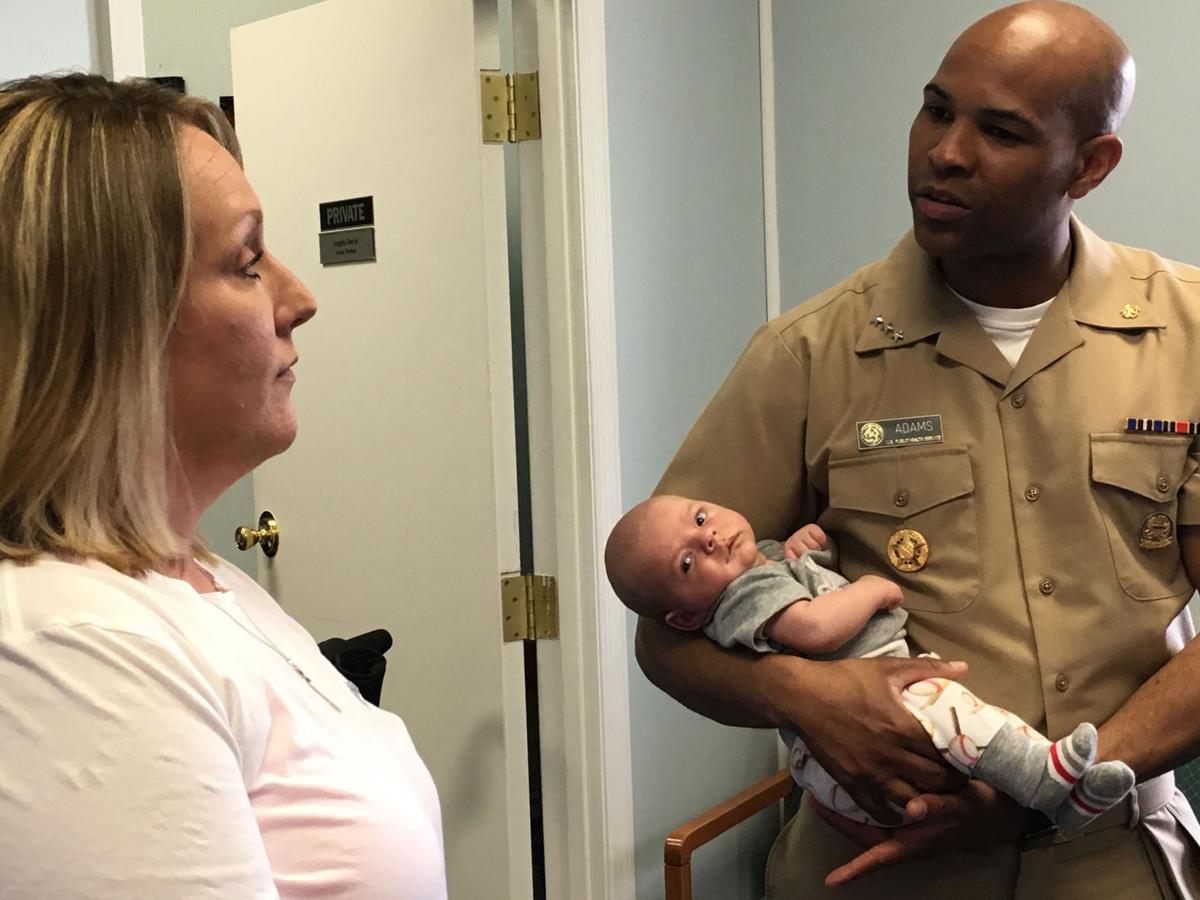 U.S. Surgeon General Dr. Jerome Adams holds 7-week-old Brantlee Jordan while speaking to Brantlee's mother, Sarah Jordan, of Milton, during a tour of Lily's Place on Thursday, May 10, 2018, in Huntington. 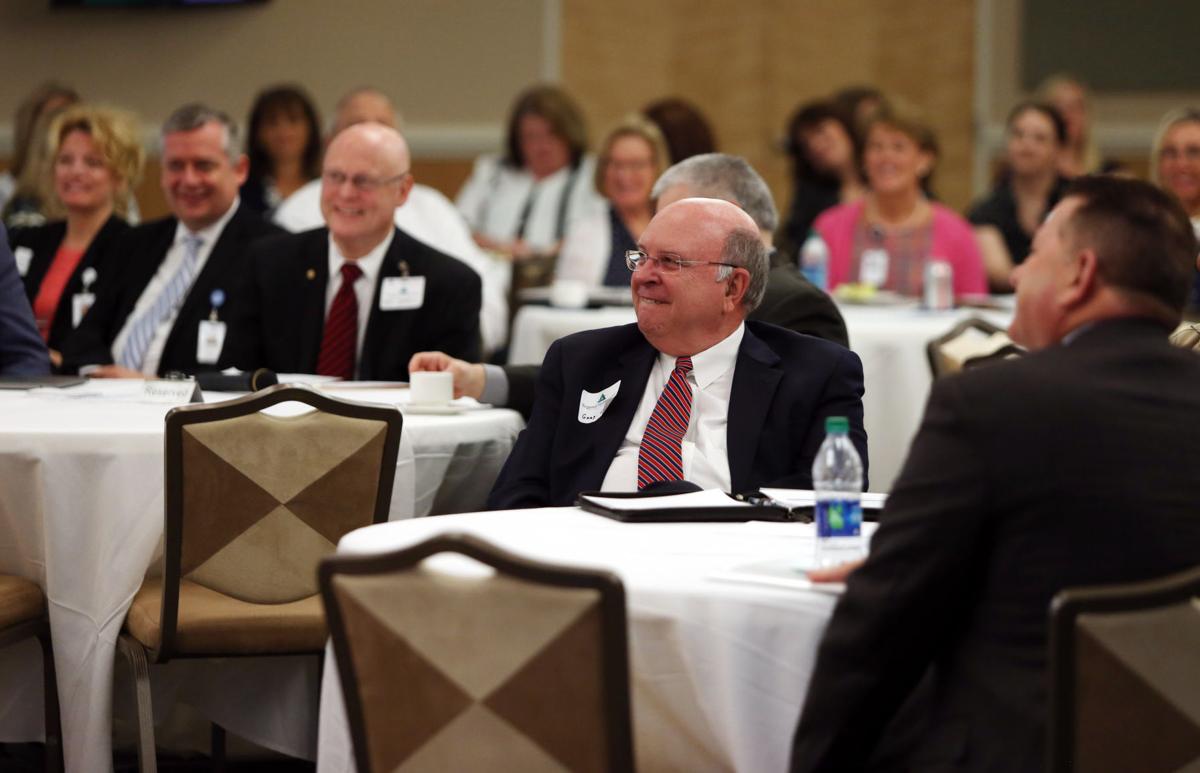 Several health care leaders from around the Tri-State attend the 2018 Regional Health Summit on Thursday, May 10, 2018, at St. Mary's Conference Center in Huntington.

U.S. Surgeon General Dr. Jerome Adams holds 7-week-old Brantlee Jordan while speaking to Brantlee's mother, Sarah Jordan, of Milton, during a tour of Lily's Place on Thursday, May 10, 2018, in Huntington.

Several health care leaders from around the Tri-State attend the 2018 Regional Health Summit on Thursday, May 10, 2018, at St. Mary's Conference Center in Huntington.

HUNTINGTON - U.S. Surgeon General Dr. Jerome Adams paid a visit to Huntington on Thursday for all the right reasons, as he put it.

The city, once shoved into the spotlight as the world's media flocked to document the opioid epidemic's darkest hours, now stands as one of the few to provably control and reverse its overdose totals.

"I came to Huntington because it's one of the best stories in the United States in terms of recovery. If we can turn around overdose numbers here, we can do it anywhere," Adams said, speaking at Cabell Huntington Hospital's annual Regional Health Summit in Huntington. "I'm here to learn about what's working so I can share it with Washington, D.C., and the rest of the nation."

Appointed in September by President Donald Trump to the position of the nation's top doctor, Adams is no stranger to the opioid epidemic. The 20th surgeon general served as Indiana state health commissioner as Scott County, Indiana - an Ohio River Valley community not unlike the Tri-State - suffered the single most devastating and expensive HIV outbreak in U.S. history.

While theories and practices for how best to combat widespread addiction can come from the nation's far-off urban coasts, Adams said Huntington's success stands as a relatable blueprint for the middle American regions hit hardest.

"Folks will see that if you can do it, they can do it, and they need to see that from someone who looks like them and thinks like them," Adams told a conference room full of the region's top health care leaders.

"The fact that you have turned around your overdose rate should be on the front page of The Washington Post."

In April, Adams made the Surgeon General's Office's first national public health advisory in 13 years when he advised all Americans to carry naloxone, the drug commonly carried by first responders to reverse the effects of an overdose. Adams elaborated on this rare advisory by pointing out that the majority of overdoses happen at home, adding he was "preaching to the choir" to a crowd of many who have long carried the drug every day.

The surgeon general followed up by quipping against the supposed "moral hazard" of naloxone use enabling further drug use.

Adams also pointed out a rare silver lining in that the opioid epidemic has demanded so much interagency collaboration in compiling resources from different sectors that would otherwise remain siloed. Opening up permanent lines of communication among everyone from hospitals to law enforcement to churches presents a "tremendous opportunity" for tackling the future issues public health will face.

"The opioid epidemic has given us a chance to have all of these individuals in a room, and I plead with you not to let that opportunity go to waste," Adams said. "This is really about rebuilding our communities so that whatever happens down the road, we're going to be able to overcome it."

The surgeon general immediately reiterated that the nation will, in fact, eventually fully recover from the opioid epidemic, but that these new partnerships cannot fade with it.

"If you look back in history, we've had a lot worse situations than this. We'll get over it, but I don't want to keep playing whack-a-mole when in two years from now we're talking about the new meth epidemic."

He offered a few more praises for Huntington as he tied off his keynote address.

"Your response (to the opioid epidemic) is surgeon general approved," Adams said. "You all are kicking butt here, and I'm so proud to be here."

Adams departed St. Mary's Center for Education and took an Uber to 7th Avenue for a tour of Lily's Place, the nation's first facility purpose-built to treat neonatal abstinence syndrome - when an infant is born suffering from its mother's addiction.

The nation's top doctor met and cradled 7-week-old Brantlee Jordan, of Milton, a Lily's Place graduate who transferred from Cabell Huntington Hospital when he was 6 days old.

Sarah Jordan recounted her experience at Lily's Place as they weaned away her baby boy's tremors and cries.

"They don't judge, and they want to make everyone more aware," Jordan said. "We just need more help. We need more recovery centers. You just can't judge people. You don't know their story."

Adams added that Lily's Place is a model NAS center that should be evaluated and replicated across the country.

"We know they're getting fantastic results, and if I could have 1,000 of these across the country, we'd really be having a significant impact on the opioid epidemic," Adams said. "We want to figure out what's making Lily's Place work, and do more of it."

The 2018 Regional Health Summit was held on Thursday at St. Mary's Conference Center in Huntington.