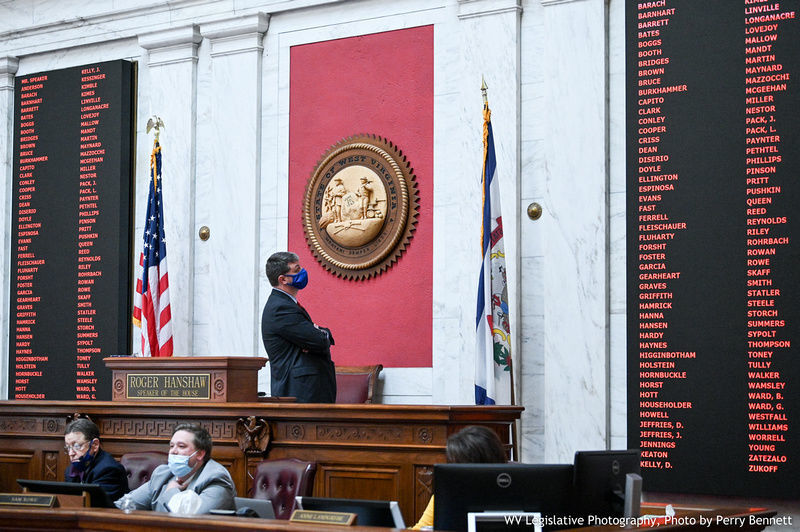 House Speaker Roger Hanshaw, R-Clay, looks at the vote board after the West Virginia House of Delegates unanimously rejected House Bill 3300 on Friday, April 9, 2021, in Charleston. The bill contained the Senate’s version of an income tax proposal endorsed by Gov. Jim Justice. 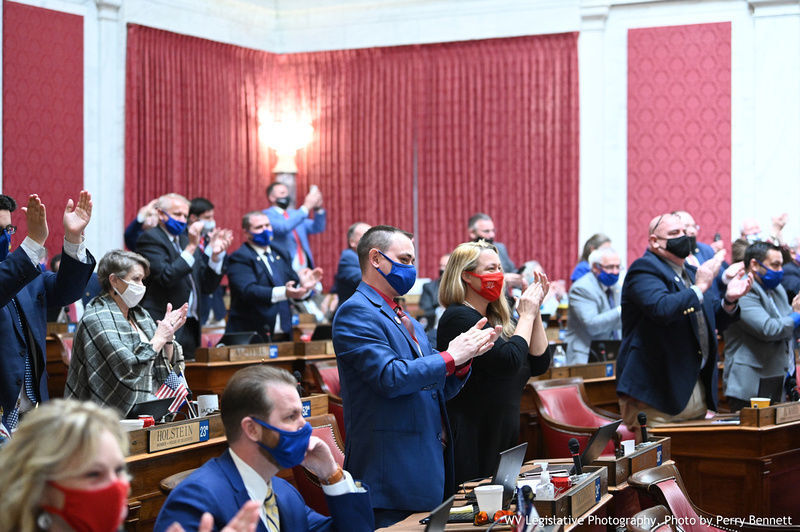 Members of the West Virginia House of Delegates applaud the defeat of House Bill 3300 on Friday, April 9, 2021, in Charleston.

House Speaker Roger Hanshaw, R-Clay, looks at the vote board after the West Virginia House of Delegates unanimously rejected House Bill 3300 on Friday, April 9, 2021, in Charleston. The bill contained the Senate’s version of an income tax proposal endorsed by Gov. Jim Justice.

Members of the West Virginia House of Delegates applaud the defeat of House Bill 3300 on Friday, April 9, 2021, in Charleston.

CHARLESTON — All 100 members of the West Virginia House of Delegates, in a major and perhaps unprecedented rebuke to Gov. Jim Justice, voted unanimously Friday afternoon to reject the Senate’s version of an income tax cut proposal endorsed by the governor.

The 100-0 vote, which assures the demise of House Bill 3300 for the session, came hours after Justice harshly criticized House leadership during a video teleconference for failing to buy into the plan.

Later Friday, in calling on delegates to reject a pending motion to concur in the Senate amendments to the bill, House Finance Chairman Eric Householder, R-Berkeley, made numerous pointed references to Justice, saying, “I don’t have a silver platter, and I don’t own a cow, and I haven’t had time to swing by a farm this morning, so I urge rejection.”

In 2017, Justice showed his displeasure with the Legislature’s version of a budget bill by serving the bill up on a silver platter, covered in cow manure. The cow reference was an allusion to a common Justice colloquialism about avoiding over-complicating matters: “Don’t count the cows’ legs and divide by four; just count the cows.”

Earlier Friday, Justice singled out Householder for criticism, saying that in negotiations on the bill, he had raised concerns about steep tax hikes on soft drinks and cigarettes in the Justice and Senate versions of the tax plan.

“Where’s that coming from? That’s coming from the lobbyists,” said Justice, accusing special interests, including the soft drink and tobacco lobbies, of killing the bill.

He said of the House’s refusal to pass the bill, “That’s some really bad stuff. That’s all there is to it. That’s just plain rotten to the core.”

The House proposal called for a comparatively gradual phaseout of income taxes, in annual multiples of $150 million a year, with no other tax increases to make up for the lost revenue. Householder conceded that plan would require cutting state programs and services over time.

“At that point, you don’t even have a government. You don’t have anything,” he said.

Currently, income taxes account for about $2.1 billion of the state’s $4.57 billion annual budget.

Justice’s plan called for a first-year income tax cut of $1.07 billion, to be partially replaced with more than $900 million in tax hikes on sales taxes and other consumption taxes.

As of Wednesday, the Senate had advanced its alternative plan, with $818 million in proposed income tax cuts and a series of somewhat smaller tax hikes. Total cost of those tax hikes remains unknown since the new version of the plan does not have a fiscal note as required by Senate rules.

While Justice has said both his and the Senate plans will benefit all West Virginians, both plans required paying rebates to individuals earning less than $35,000 a year who otherwise would pay more in higher sales and consumption taxes than they would save in lower income taxes.

Justice said Friday there’s no way he’s giving up on his proposal. He said he will continue barnstorming around the state to educate residents about the plan’s benefits, saying most West Virginians simply do not understand it.

He criticized House Republicans, whom he said came to power in the 2014 election by promising to overturn nearly 80 years of Democratic rule that had left the state with a stagnate economy and ongoing population loss, but who now refuse to embrace change.

“I could have rolled in with suitcases of money for every person in West Virginia, and the House would have said, ‘We don’t want to do that,’” Justice commented.

Justice did not commit to bringing the plan back for consideration in a special session later this year, but also said he doesn’t believe the matter can wait until the 2022 regular session.

“Do you think the spotlight of the world and the opportunity will still be here next year?” he said, referring to national publicity the state has received in its COVID-19 response and comparatively rapid rollout of vaccinations.

Justice has insisted that the income tax cuts will bring new residents and businesses to the state in large numbers, but has relied on mostly anecdotal evidence to support his claims.