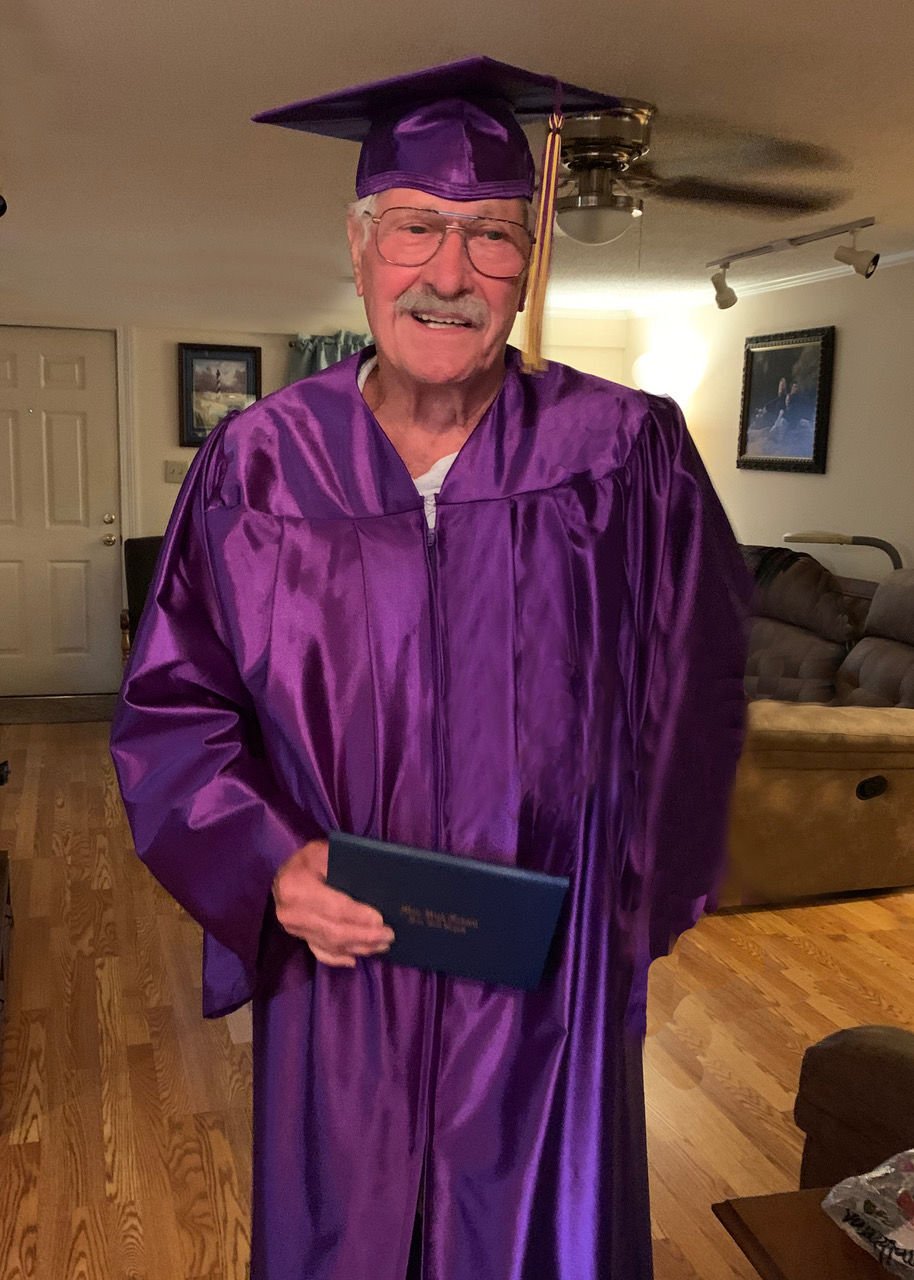 Dressed in a cap and gown, 88-year-old Korean War veteran and Buffalo Creek native Harry Osborne stands for a photo with his Man High School diploma, which was received through the West Virginia Department of Veterans Assistance program Operation Recognition. 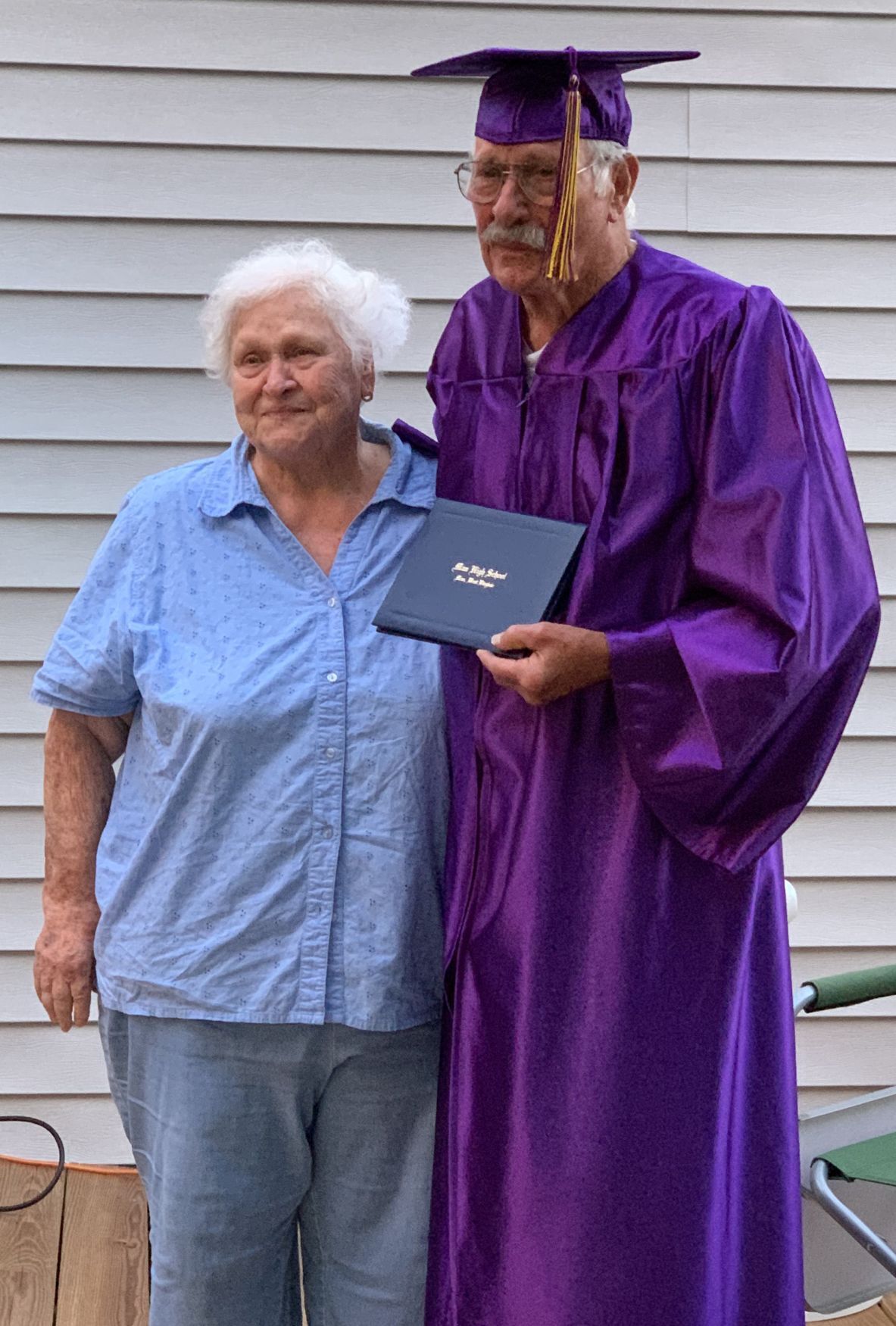 Korean War veteran Harry Osborne is pictured with his wife, Iris. The couple has been married for 65 years. Osborne, a native of Man, W.Va., who now lives in North Carolina, received his high school diploma through the West Virginia Department of Veterans Assistance program Operation Recognition.

Dressed in a cap and gown, 88-year-old Korean War veteran and Buffalo Creek native Harry Osborne stands for a photo with his Man High School diploma, which was received through the West Virginia Department of Veterans Assistance program Operation Recognition.

Korean War veteran Harry Osborne is pictured with his wife, Iris. The couple has been married for 65 years. Osborne, a native of Man, W.Va., who now lives in North Carolina, received his high school diploma through the West Virginia Department of Veterans Assistance program Operation Recognition.

KINSTON, N.C. — After dropping out of school after the 10th grade and joining the U.S. Marine Corps during the Korean War, Harry Osborne never dreamed he would have his diploma from Man High School.

But last year, at the age of 87, he finally received his diploma, thanks to a program through the West Virginia Department of Veterans Assistance.

Born Oct. 21, 1932, the now 88-year-old Osborne would have graduated with the Man High School Class of 1950. He was originally from the Buffalo Creek community of Braeholm, and his homeplace was later wiped out by the Buffalo Creek flood in 1972.

“The place I was born in, the flood, it wiped it out. It’s no longer there,” Osborne said.

Osborne, the eldest of 12 siblings, dropped out just before the 11th grade and began working in the coal mines to help support his family. Not long after that, he voluntarily enlisted in the U.S. Marine Corps.

“I volunteered to go,” Osborne said. “I just had something inside of me that just told me, ‘You got to go. If they sign a ceasefire by the time you get there, you’ll see part of the world you never would have seen anyway.’ I’ve got one battle star, and then they signed a ceasefire, and I spent 14 months over there. They extended us after they signed the ceasefire.”

After returning from Korea, Osborne said he worked a couple odd jobs in the Washington, D.C., area, including a cinder block plant. He was then stationed as a guard at the gate of the Navy Yard in Washington.

In all, Osborne spent three years in the Marine Corps, from July 1952 to July 1955, and five years in the U.S. Army Reserve. He said agreeing to enter the Reserve was the only way he could get an enlistment at the time.

Osborne then worked for a chain store bakery in the D.C. area for 42 years. Upon retiring, he and his wife, Iris, decided to move to her home state of North Carolina, settling in the city of Kinston, where they have lived for the past 22 years.

“I met her in D.C. through a friend of mine, and we was there. We’ve been married for 65 years now,” Osborne said with a chuckle. “When I retired, the cost of living down here, it’s a whole lot less than what it is around the D.C. area.”

At the age of 87, Osborne was surprised when a close friend of his from North Carolina named Bruce Williamson presented him with his diploma from Man High School — nearly 70 years after he would have originally received it. The West Virginia Department of Veterans Assistance offers a program called Operation Recognition that allows veterans of World War II, Korea or Vietnam to receive a high school diploma if deemed eligible.

Through a casual conversation, Osborne said Williamson learned he had never received his diploma. Williamson completed the application on Osborne’s behalf.

“He went through all the paperwork and everything and contacted the Veterans Administration in West Virginia,” Osborne said. “It was really emotional actually, because I never expected anything like that, and on occasion, I’ve had to tell people that I didn’t have a high school diploma for one reason or another, something came up. It was really a surprise. It really was. I can’t thank (Williamson) enough. He’s one of the best friends I’ve ever had, really.”

Any veteran of World War II, Korea or Vietnam who might be interested in receiving a high school diploma can fill out an application at https://veterans.wv.gov/Benefits. Applications can also be picked up at any of the West Virginia Department of Veterans Assistance’s field offices.

“I would encourage any veteran, if they really wanted a high school diploma, to go ahead and pursue it, because it was really emotional and it, kind of … I guess you know what I’m trying to say,” Osborne said, still speechless about the experience.

HD Media news reporter Dylan Vidovich can be contacted via email at dvidovich@hdmediallc.com.