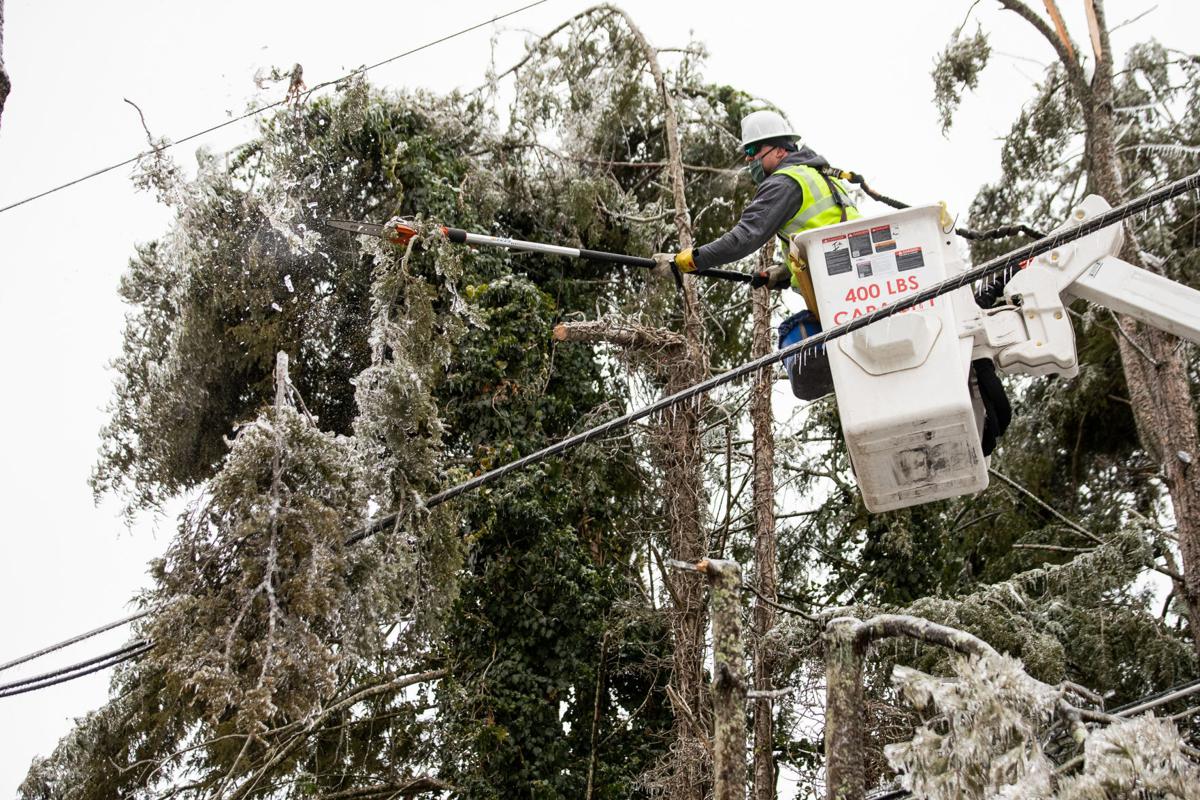 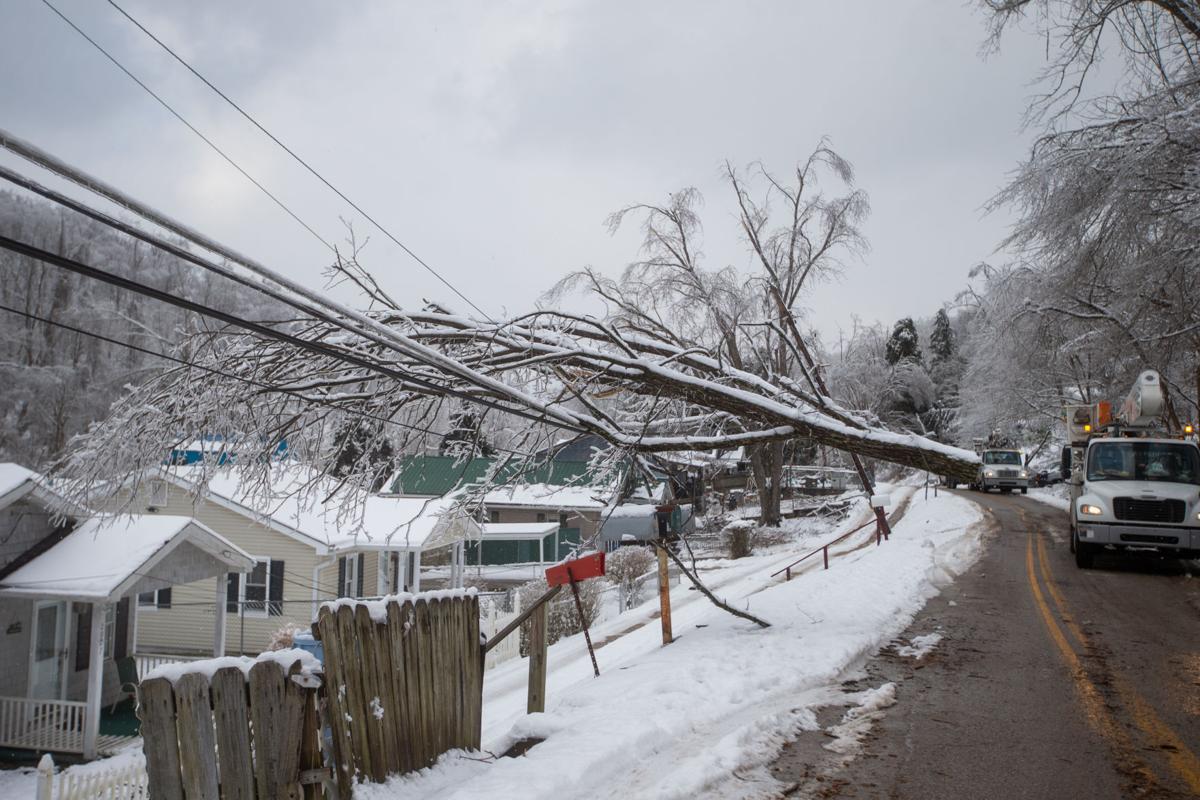 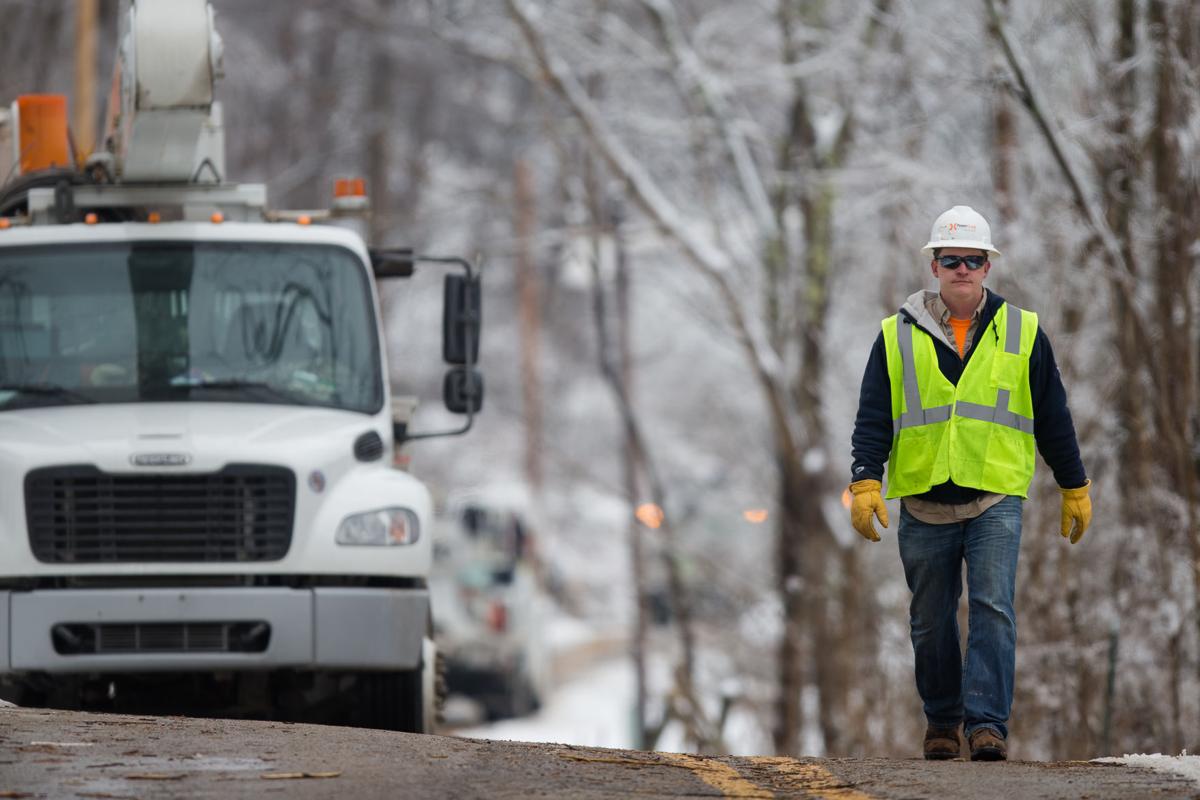 Crews close off parts of Harvey Road to work on repairs to downed power lines on Sunday, February 21, 2021, in Huntington.

Crews close off parts of Harvey Road to work on repairs to downed power lines on Sunday, February 21, 2021, in Huntington.

The latest episode continued well into Monday, 11 days after the first of two ice storms that triggered a peak of 97,000 outages among Appalachian Power customers, leaving thousands scrambling in southwestern West Virginia as they struggled to cook food and get warm as temperatures stubbornly stayed in the 20s and teens.

But it was West Virginia that had the highest total number of outages and percentage of outages among customers throughout the country Sunday and Monday, according to national outage trackers powered by Data Fusion Solutions and Bluefield Studios LLC.

West Virginia still had over 26,000 outages Monday afternoon, more than any other state, and its statewide percentage of customers without power, 2.67%, was more than twice as much as the state with the next highest clip, Mississippi.

The biggest obstacle for Appalachian Power in restoring service has been ice, said company spokesman Phil Moye, saying that ice storms are unique in their ability to damage trees and electric infrastructure with added weight.

“As long as trees are around, this type of storm is going to cause damage, not only to electric infrastructure but to anything within the trees’ paths as they fall,” Moye said.

Manpower mobilization has not been an issue, according to Moye, who reported that Appalachian Power had 600 workers from outside the company’s service area on site before the Feb. 11 and Feb. 15 ice storms, drawing from fellow American Electric Power subsidiaries in Ohio and Indiana, and had deployed around 2,300 workers in the service restoration effort in ice-damaged counties, including more than 500 tree-clearing workers.

But Appalachian Power reported Monday there were still at least 1,350 separate locations where repairs were needed, with assessment teams estimating that as many as 600 broken poles and roughly 2,400 spans of wire must be replaced to restore all customers to service.

Painfully long delays in power restoration are nothing new in West Virginia.

In 2011, the state Public Service Commission put into effect rules for electric reliability requirements in response to power outages caused by a December 2009 winter storm that required utilities to submit annual reliability reports to the commission that included outage duration and frequency data, their number of sustained power interruptions and what caused them, and planned improvements for utilities’ worst-performing circuits.

In 2012, a derecho left 1.6 million West Virginians without power, some for two weeks, and Hurricane Sandy also caused significant outages in the state. The following year, in an order that cited those two storms, the Public Service Commission ordered all electric utilities to file time cycle-based right-of-way vegetation control programs and status reports on planned improvements to their storm response procedures within six months.

“The Commission expects that the electric utilities’ efforts to adhere to the new Electric Rules and the implementation of cycle-based vegetation clearing programs will significantly improve reliability throughout the state,” the commission wrote in its 2013 order.

But a Charleston Gazette-Mail review of seven years of electric reliability data for utilities nationwide from the U.S. Energy Information Administration shows that outages grew longer and more frequent for customers of West Virginia’s utilities since 2013, even outpacing national rises in those categories.

Appalachian Power’s System Average Interruption Duration Index, a reliability indicator measuring average yearly duration of outages, was 702 minutes including major event days (when outages exceed the usual averages for a given day, like during severe weather) and 596 minutes excluding them in 2013. That means that the average Appalachian Power customer was without power for nearly 12 hours during the year when including days when severe weather or other factors drove outage metrics up.

In 2019, the most recent year for which U.S. Energy Information Administration data was available, those averages rose to 900 minutes and 650 minutes with and without major event days, more than three and nearly five times the national averages for those respective categories.

Appalachian Power’s System Average Interruption Duration indices with and without major event days for its West Virginia customers have consistently been among of the nation’s highest, and the utility has had one of the longest average outage duration measures when excluding major event days in six of the past seven years, finishing with the highest such average in the country among investor-owned utilities each year from 2014 through 2016.

The utility’s System Average Interruption Frequency indices with and without major event days, which measure average yearly frequency of outages, reached their highest totals among all seven years for which data was available in 2019: 3.317 and 2.883 respectively, meaning that is how many outages the average customer experienced during the year. Both totals were more than twice the national averages in those respective categories.

Appalachian Power moved in 2014 to a cycle-based vegetation management approach in which all circuits are managed end to end every six years, which Moye observed was “dramatically different” from the usual method of managing vegetation along lines based on the worst trouble areas.

The approach has yielded progress, according to Moye, who said that outages within the company’s rights of way have decreased 61%.

“(R)educing instances of tree-related outages will always be a challenge,” Moye said, adding that Appalachian Power spends more than $53 million each year to manage vegetation on and adjacent to its rights of way, also investing in “smart circuit” technology that speeds restoration by pinpointing an outage location and automatically switching customers outside the damaged area back in service — a technology he said more than 20 of the company’s West Virginia distribution circuits have.

At a November 2020 status conference, commission Chairman Charlotte R. Lane asked Appalachian Power and Wheeling Power representatives if they knew how West Virginia’s outage duration and frequency data compared to those of other states.

“(I)t’s more unfavorable,” said Brian Martin, a support manager for Appalachian Power. “(Y)ou’ve just got a pretty dramatic difference in the terrain, the circuitry, the customer base, the density of customers, the amount of load that the customers use. It’s just sort of a different territory from some of the surrounding states.”

In response to the commission’s request at the status conference to submit new reliability index targets, Appalachian Power and Wheeling Power earlier this month offered targets less stringent than the existing ones they have been failing to meet, but added that it did not recommend them, saying that the existing targets should remain in place instead.

Climate change has been a factor in decreasing the electric reliability of West Virginia’s electric utilities, including FirstEnergy subsidiaries Mon Power and Potomac Edison (whose indices have not been as poor as Appalachian Power and Wheeling Power), and utilities across the nation since 2013.

Of the 285 billion-dollar weather and climate disasters since 1980, 119 came from 2010 through 2019, according to the National Oceanic and Atmospheric Administration.

An analysis last year by the science news organization Climate Central showed a 67% increase in major power outages from weather-related events since 2000. Of the 285 billion-dollar weather and climate disasters since 1980, 119 came from 2010 through 2019, according to the National Oceanic and Atmospheric Administration.

So climate trends suggest that West Virginia’s electric reliability will be tested increasingly often in the coming years, making the stakes even higher for the state’s utilities to improve their reliability metrics.

“I would hope, Ms. Chairman, that, you know, in four or five years … that we would start to see our performance more consistently being between the optimal and minimal line,” Martin told Lane during the November status conference. “And then we can talk about, you know — it’d be many years out, but maybe making them a little more stringent as we go along. But right now, we’re only meeting them sporadically. It makes sense to leave them where they’re at.”