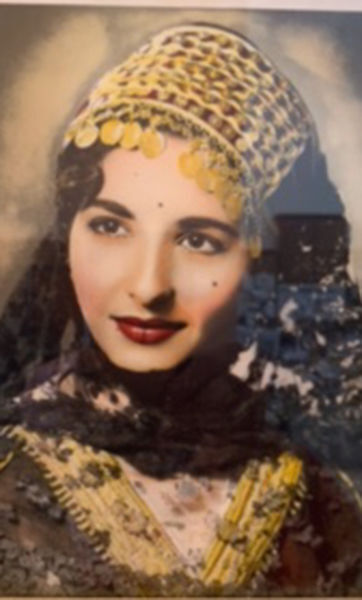 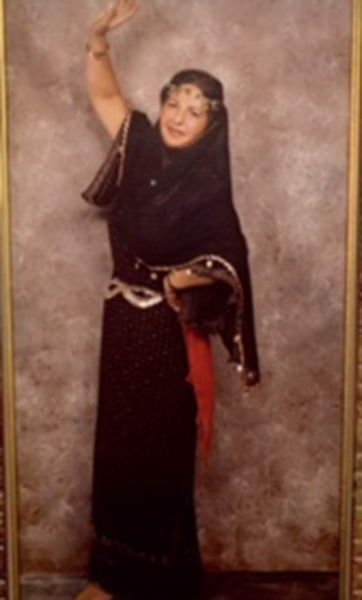 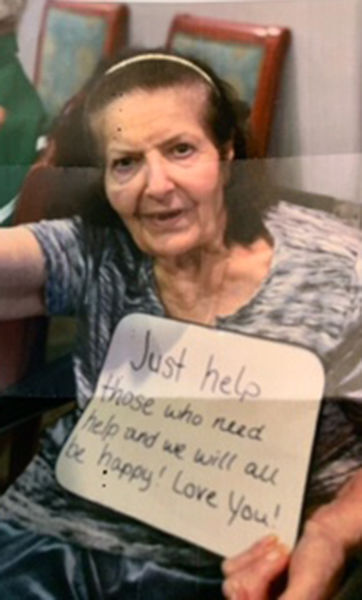 NAIME TOUFIC SAAD JOSEPH, 88, more affectionately known as Mama J, went to dance with the Angels in Heaven on February 12, 2021, 9:56 p.m. at St. Mary’s Medical Center due to prolonged sequelae of a massive heart attack. She survived a plethora of complications that only the strongest could have weathered. Mom was born November 22, 1932, in Kfeir, Lebanon, to the late Toufic Saad and Mountaha Mackarios Saad. She spent her childhood working in the garden picking olives and tending sheep. Her childhood dream of coming to America was fulfilled when, at age 16, she came to New York City to be a nanny for her cousin’s family who worked in the United Nations. Two years later, during a visit to Toledo, Ohio, Sam Joseph, a WWII veteran from Kfeir, married her on November 25, 1951, moving her to Huntington where she lived the remainder of her life.

Mom quickly integrated into the Lebanese-American community and embraced living in America with a great appreciation of the values upon which this country was built. She proudly became a United States citizen May 1, 1959, despite struggling to teach herself the English language. While Sam instilled integrity and work ethic into his children, Mom infected us with the qualities of empathy and unconditional love.

She became enmeshed in the activities of her family, including her siblings, nieces and nephews, Marshall sports and her beloved Holy Spirit Orthodox Church, where she taught Sunday School and was known as a super submarine sandwich maker. She was “Mama Bones” to her son’s friends, and would be known to leave an occasional surprise snack for that pioneer class of Marshall Med School. Mom never knew a stranger and made friends wherever she went, the grocery, the mall, the post office, spreading her goodness around, often handing out angel pins. She embraced life with passion and never turned down an opportunity to burn up the dance floor. While Mom adored her children and grandchildren, she was “everybody’s mother,” and gifted with a listening ear, she mentored many with her faith and love of Jesus Christ.

Her favorite sayings, “Naime-isms” (as her niece Rebecca called them), included “Remember, God is in control,” “This is not my real home; my real home is with Jesus,” “Let every breath praise the Lord,” and saying so many times, even the granddogs could say it, “Lord have mercy!”

Left to cherish her memory and carry on her example of faith are son, John Joseph, his wife Krissy and their sons Nick and Mike of Georgia, daughter, Diana Asmus and her son CJ Asmus of South Carolina, sister-in-law, Rose Saad of Huntington and family, brother, George Saad and family of Beirut and Canada, brother, Daniel Saad and family of Kfeir, sister, Eva Mckarris of Canada with her beloved children and their families, Naheel, Sally, George and Sam, brother, Edward Saad and family, niece, Donna Joseph of Columbus, and very precious brother and sister-in-law, whom Mom loved dearly, Julian and Jihad Saad (and her mother, Miriam) of Huntington and their children Rebecca, Abraham and Christina and their respective beautiful families, her “other son,” David Rahal, her “other brother,” George and wife Gloria Hanna, her “other sister,” Rhoda Hodge and daughter Sharon, and last, but not at all least, daughter, sandra and granddogs Arlo, MUs and Mario.

She also leaves a multitude of friends and godchildren, among them Carol and Jim, Kathy, Lexa, Lila, Martha, Matt, Andrea, Nick, the Bolus family, Father John and Loukia, and the many, many others whose lives she touched. Special thanks to Dr. Elizabeth Saunders, who cared for her in the hospital. And gratitude and appreciation, more than words can express, to the caring staff at Wyngate Barboursville who meticulously cared for Mom and where her outgoing personality outshone the dementia that robbed her of so much. As one of the staff said, “Thank you for sharing your Mom with us.”

As much as Mom loved flowers, she loved even more her church, feeding the poor and caring for animals. Suggested donations can be made in her memory to Holy Spirit Orthodox Church, the Huntington City Mission, Cridlin Food Pantry, Kfeirian Reunion Foundation, Cabell-Wayne Animal Shelter or ASAP (Advocates Saving Adoptable Pets).

Due to this dreadful pandemic, visitation by drive-by will take place from 11:30 a.m. to 1 p.m. Tuesday, February 23, 2021, at Holy Spirit Orthodox Church, entering the parking lot at Woodhaven Drive and exiting at the southbound end. Funeral service for the family at the church at 1 p.m. will be livestreamed via Holy Spirit Antiochian Orthodox Church Facebook page or at www.holyspiritwv.org. Burial at 2:15 p.m. at Spring Hill Cemetery for friends and family observing CDC guidelines of mandatory masking and social distancing. While we all want to hug, and Mom loved giving hugs, we totally understand the need for distancing during this pandemic, so condolences can also be made via Klingel-Carpenter Mortuary, who is handling arrangements, via family guestbook at www.klingelcarpenter.com.

We are blessed to have had Naime, Mama J, Mom, Amtoo (auntie), Sitty (grandmother) as a mother, grandmother, sister and aunt who taught us about faith and love, who let Jesus’ light shine through her and through those sparkling eyes. Her wish would be that we would all keep the faith until we meet again. “I have fought the good fight, I have finished the race, I have kept the faith. From now on there is laid upon for me the crown of righteousness, which the Lord, the righteous Judge, will award to me on that day — and not only to me, but to all who crave His appearing” (2 Timothy 4:7-8).

Mom, you are terribly missed, but I know you are HAPPILY DANCING with the ANGELS around the THRONE. Love forever.❤

We accept obituaries only from the funeral home in charge. For information on submitting an obituary, please contact The Herald-Dispatch by phone at 304-526-2793 or email at obits@herald-dispatch.com. Obituaries for The Herald-Dispatch must be received by 2 p.m. to appear in the next day’s publication. Obituaries for the Wayne County News, which publishes on Wednesday, must be received by noon Tuesday.