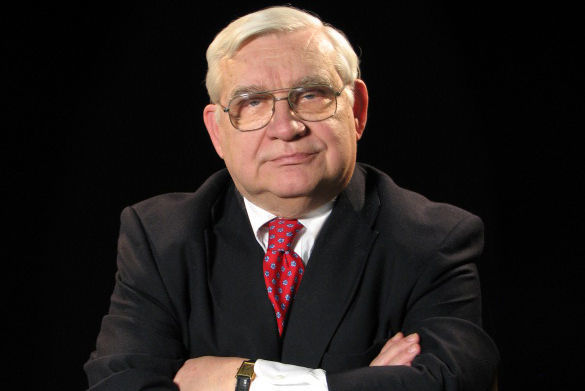 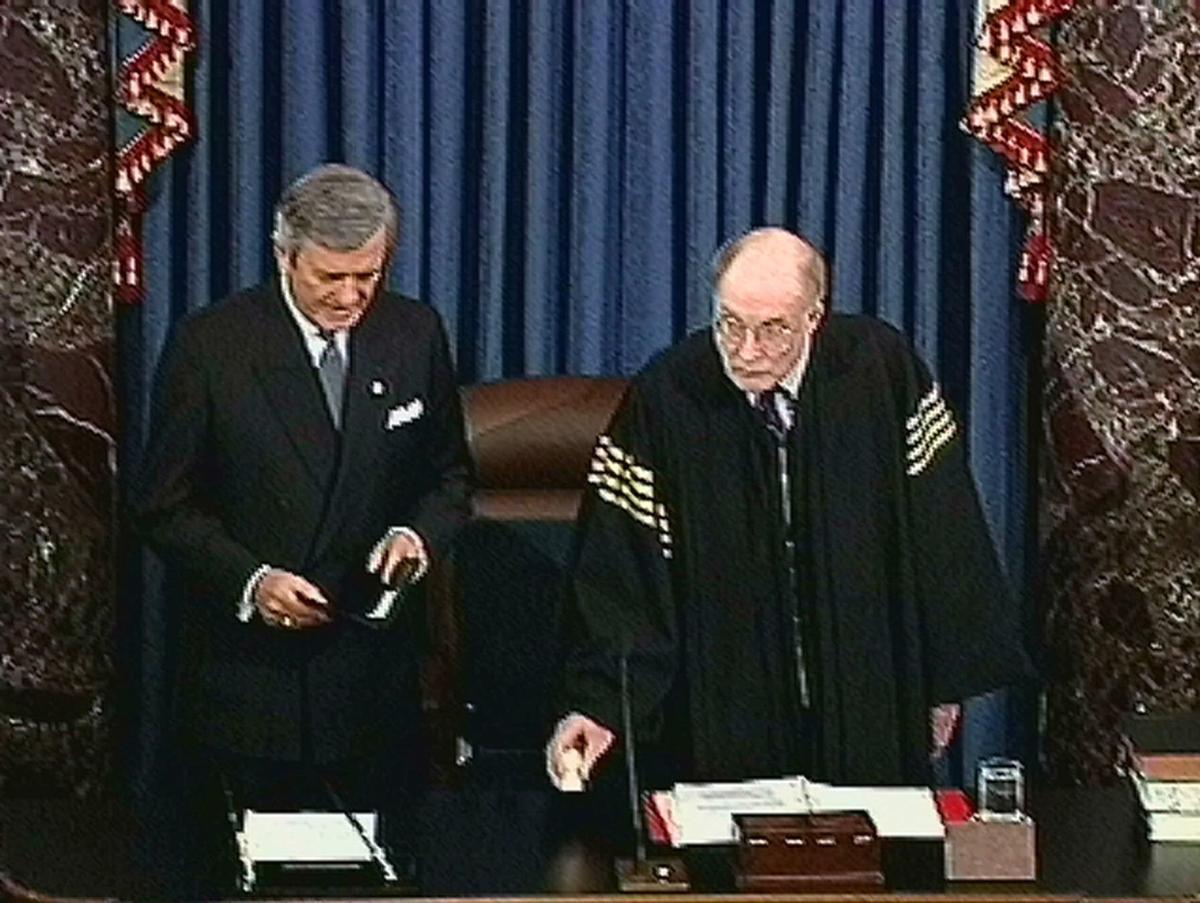 - -Chief Justice William H. Rehnquist, shown in this video image, strikes the gavel to open the impeachment trial of President Clinton on the Senate floor in the Capitol, Thursday, Jan. 14, 1999, in Washington. At left is Chaplain Lloyd Ogilvie (AP Photo/APTN)

- -Chief Justice William H. Rehnquist, shown in this video image, strikes the gavel to open the impeachment trial of President Clinton on the Senate floor in the Capitol, Thursday, Jan. 14, 1999, in Washington. At left is Chaplain Lloyd Ogilvie (AP Photo/APTN)

WASHINGTON — After a Wednesday of blue skies and temperatures in the 50s, Washington awoke Thursday to freezing rain and bitter wind.

And, perhaps an appropriate backdrop for the historic event about to unfold on Capitol Hill — the impeachment trial of William Jefferson Clinton.

In recent years, as the world has become an increasingly more dangerous place, security everywhere in Washington and especially at the U.S. Capitol, has become tighter and tighter.

But when you enter the Capitol this morning and pass through the metal detector there, you sense a difference. There seems to be more police presence than you recall the last time you were here.

You think maybe so until only minutes after arriving you overhear a hallway conversation between two young congressional staffers.

“Did you see the line at roll call?” asks one.

“The roll call of all the police officers. It was the longest I’ve ever seen. It just went on and on.”

Later, you’re in the hallway as President Clinton’s defense team arrives for the 1 p.m. proceedings. Two security officers lead the way, asking people to step aside and allow the lawyers to make their way down the crowded corridor. They bustle past and disappear around the corner.

With time to kill, you browse a gift counter. There among the usual array of post cards, posters and other souvenirs, you spy a stack of copies of the U.S. Constitution — the great document at the center of the current controversy. Not far from the paperback Constitutions you see a couple of refrigerator magnets with photographs of Socks, the Clintons’ White House cat. Significantly, the gift counter seems to have nothing that shows the faces of Bill Clinton or first lady Hillary Clinton.

You turn to see Cokie Roberts of National Public Radio hurry by.

Thanks to Sen. Robert C. Byrd, D.-W.Va., you have a pass that admits you to the family section of the Visitors Gallery. That makes you one of a fortunate few who have an up close and personal look at what’s about to happen.

Millions will watch the unfolding drama via television, but in future years you can say you were there, you saw it happen.

Entering the Visitors Gallery, you must pass through a second metal detector and you are reminded of some of the rules for visitors: no talking, no reading, no note taking, no hats on men except for religious purposes.

You look down to the Senate floor and watch as one by one the senators make their way into the chamber.

Chief Justice William Rehnquist enters in his black robe with the gold stripes on his sleeves gleamingly bright. There’s no audible gasp, but you can feel the electricity as it sweeps across the room.

The Senate chaplain offers a brief invocation and at last, after a year of gossip and rumor, after millions of words and thousands of pictures, after all the charges and countercharges, the trial of the president is under way.

House Judiciary Chairman Henry Hyde, R.-Ill., steps to the podium and begins outlining how the 13 House managers intend to lay out their case.

Above and behind Hyde, in the press gallery, more than 100 reporters furiously write away. All are armed with notepads. No tape recorders, no cameras. This is the Senate where there are rules. There are so many reporters they have spilled out each end of the section usually reserved for them and occupy some of the seats normally used for the public.

Strangely, here and there a few empty seats can be seen in the gallery. Perhaps the day’s bad weather has kept some people away.

The senators have been cautioned on how to behave during the trial. They’ve been told not to whisper and not to chat on cell phones. They’ve obviously taken those cautions to heart.

If you’ve ever visited the Senate and watched it work, you know it can be a noisy place. Not today. You could hear a pin drop. And it’s easy to hear the beeping phone in the purse of a woman seated near you in the gallery. A guard steps forward and extends his hand. The woman hands over her phone. It appears the guard wants to eject her, but she stays seated and he walks away.

At his desk, Byrd sits motionless as a statue, his hands carefully folded in his lap. He looks so solemn he could be in church. The senator’s face betrays no hint of what he’s thinking as Hyde continues speaking.

In the back row, Sen. Jay Rockefeller, D.-W.Va., has his lanky legs crossed in front of him and a thick three-ring binder open on his lap. Pen in hand, he makes an occasional note.

You get up and make your way out of the gallery. Your time is up. Someone else needs your seat.

Out in the hallway, you encounter a group of high school students, visiting the Capitol, just as so many of their parents and grandparents did before them. The girls giggle as only high school girls can. The boys are trying hard to act as if they’re totally unimpressed by the majesty of the Capitol. They’re way too cool to be in awe of a dumb building.

But, like you, many will in future years remember where they were this day.

You stop in the hallway and watch for a few minutes as a young artist carefully works on restoring one of the intricate murals that decorate many of the Capitol corridors. You chat briefly with him and he tells you that the restoration project, now under way, will take 10 years to complete. You think about the fact that the impeachment trial, whatever its outcome, will be over in few days.

Coming to a window you can look out and see the Capitol lawn. The TV reporters and camera people are lined up doing their stand-up reports.

It’s a grim day in Washington.

James E. Casto was a reporter, editor and columnist at The Herald-Dispatch for more than 40 years before he retired in 2004.