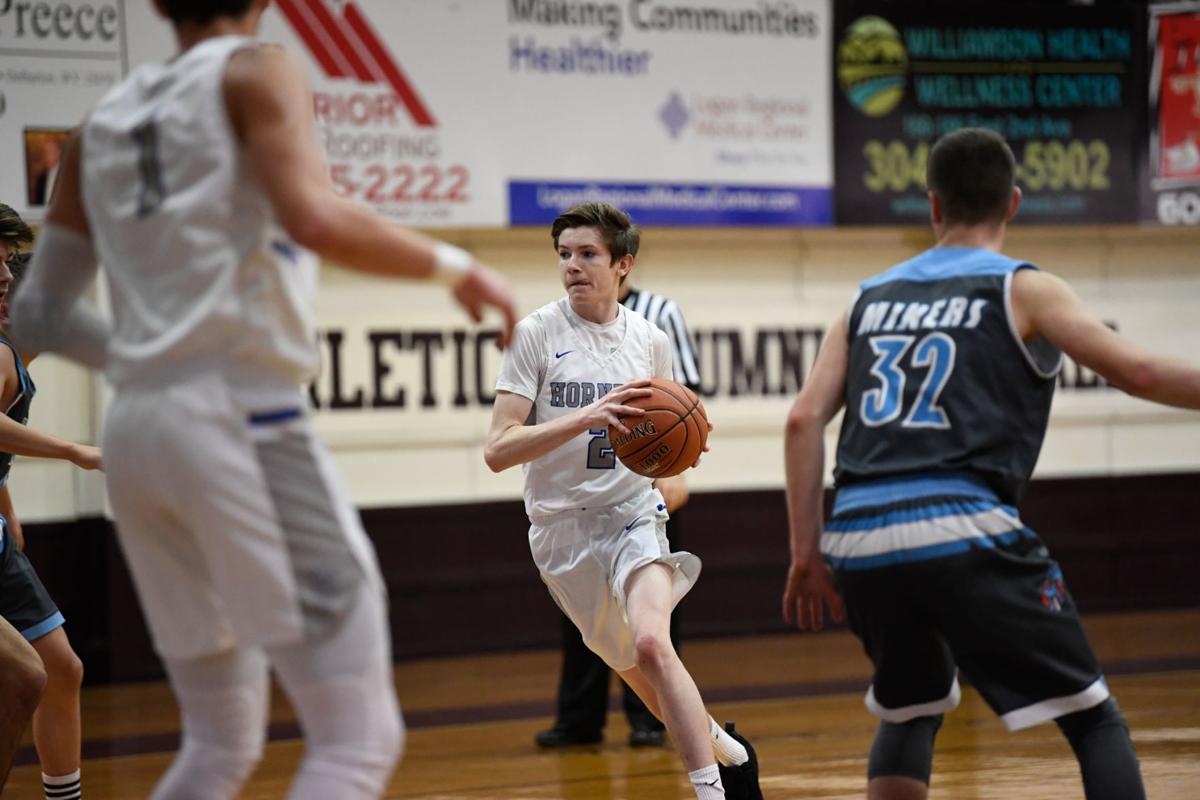 Phelps guard Jason Casey drives to the basket in a game against Mingo Central in the 2019 Hatfield and McCoy Shootout at the Williamson Fieldhouse. 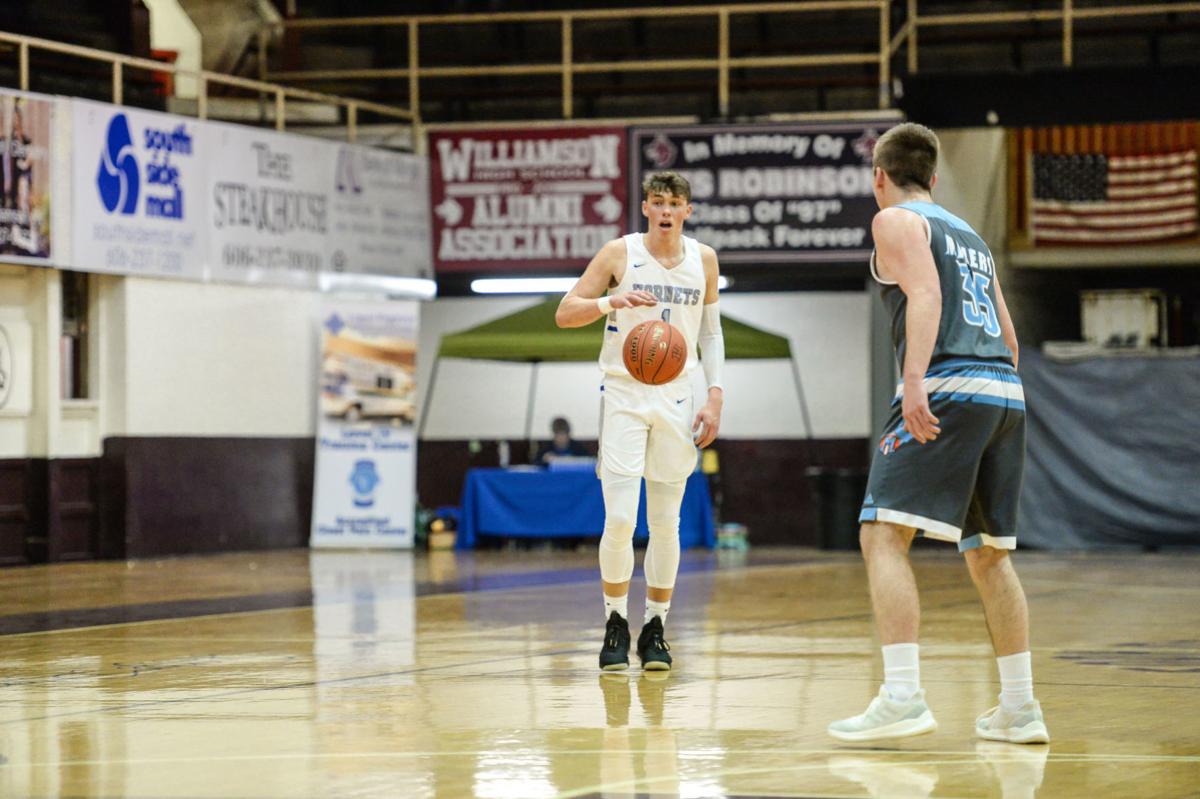 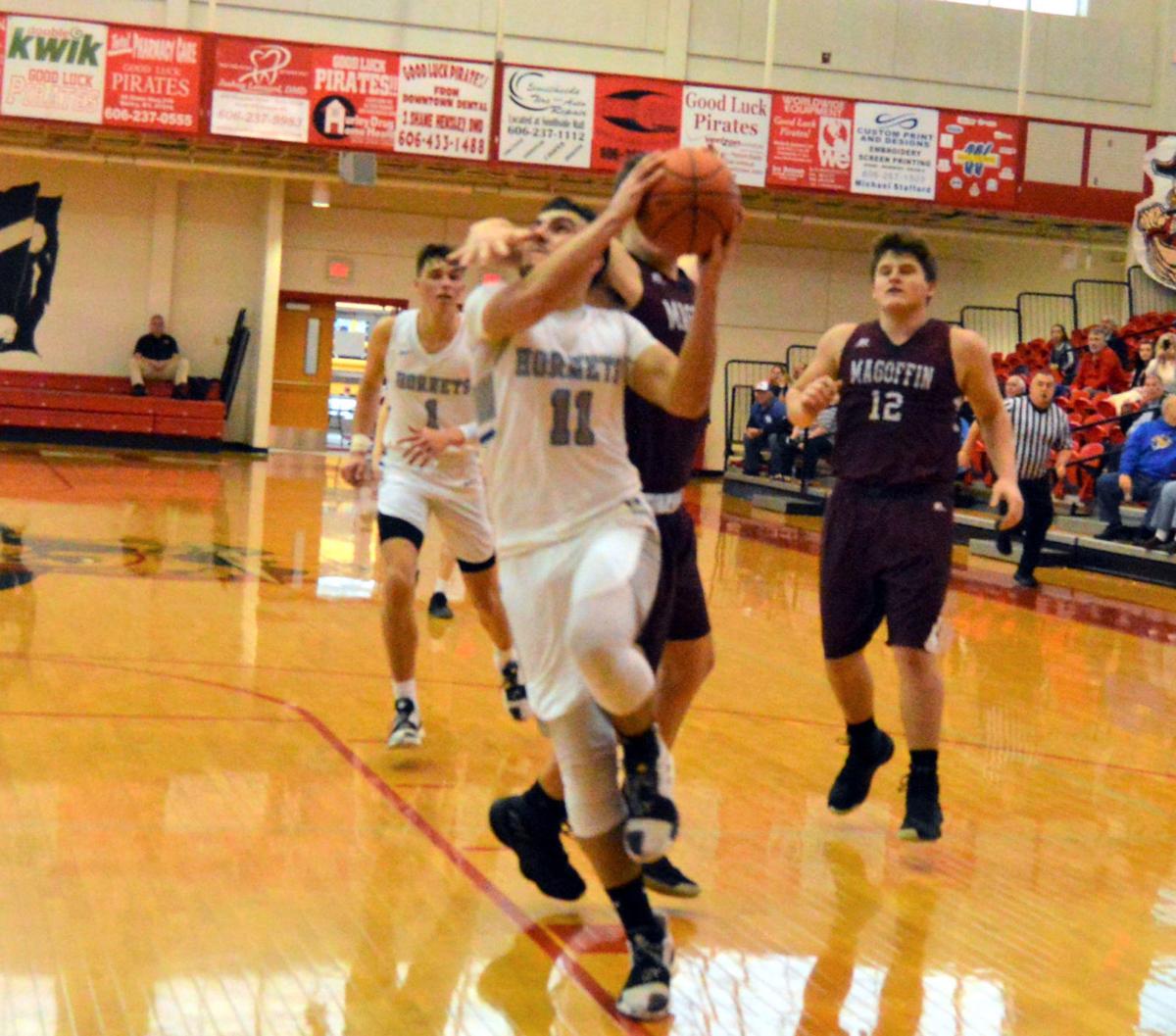 Phelps junior Dominick Francis goes to the hole in a game against Magoffin County in the 2018 Mountain Schoolboy Classic. 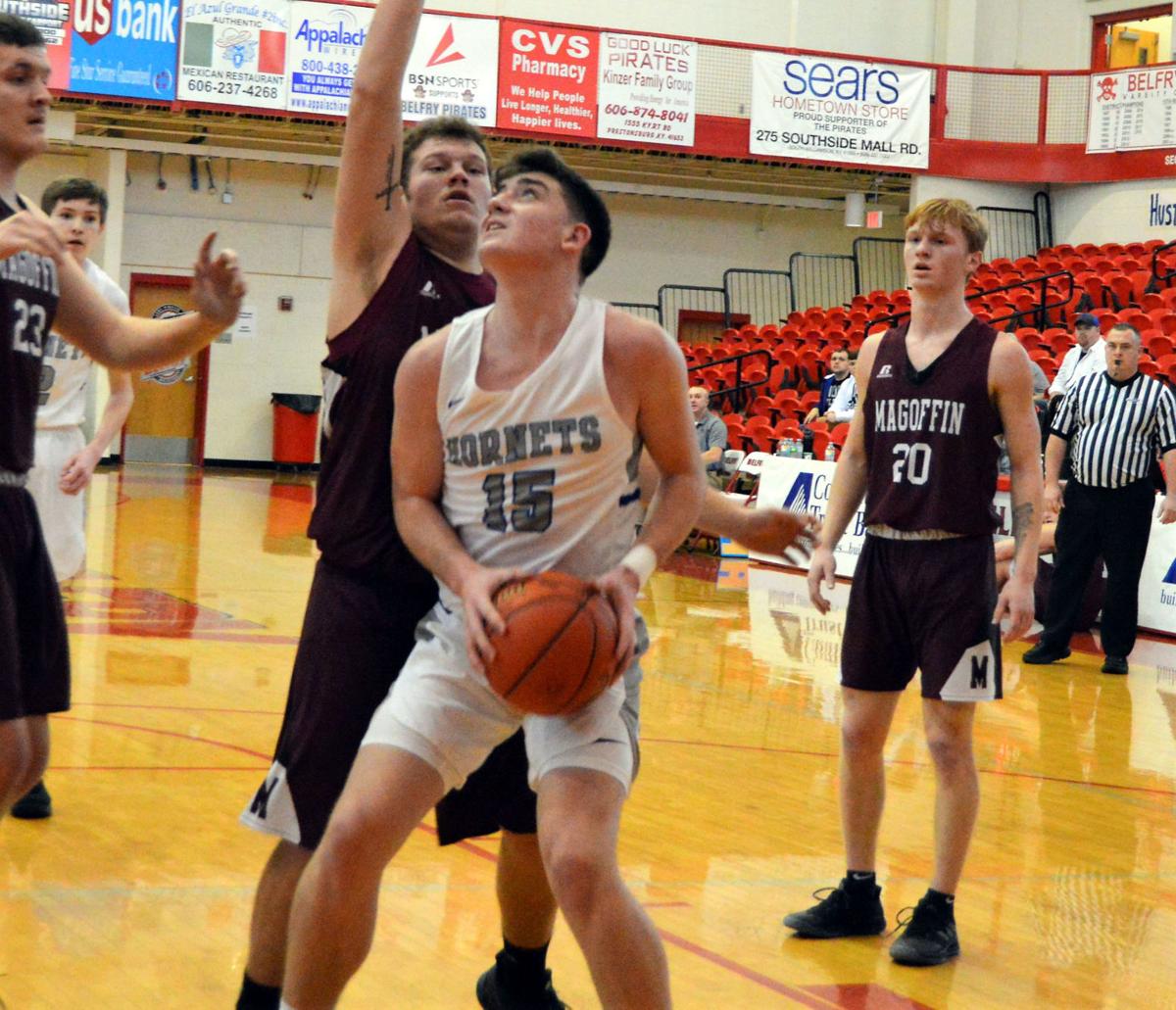 Phelps forward Seth Mayhorn powers to the basket during a game in the 2018 Mountain Schoolboy Classic at Belfry High School. 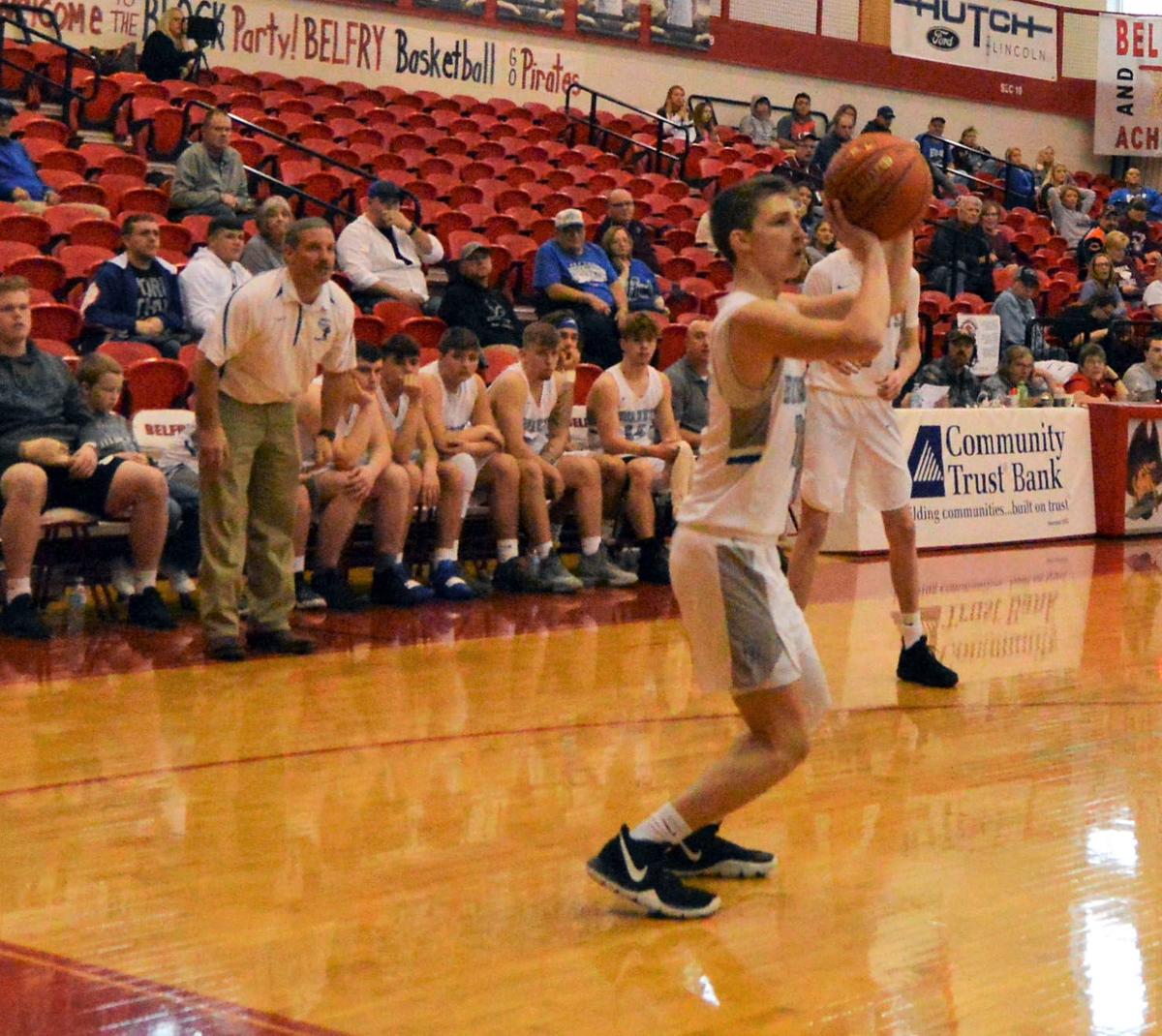 Phelps senior guard Cameron Sanson takes a baseline jumper while coach Jason Sanson looks on in the background during the 2018 Mountain Schoolboy Classic. 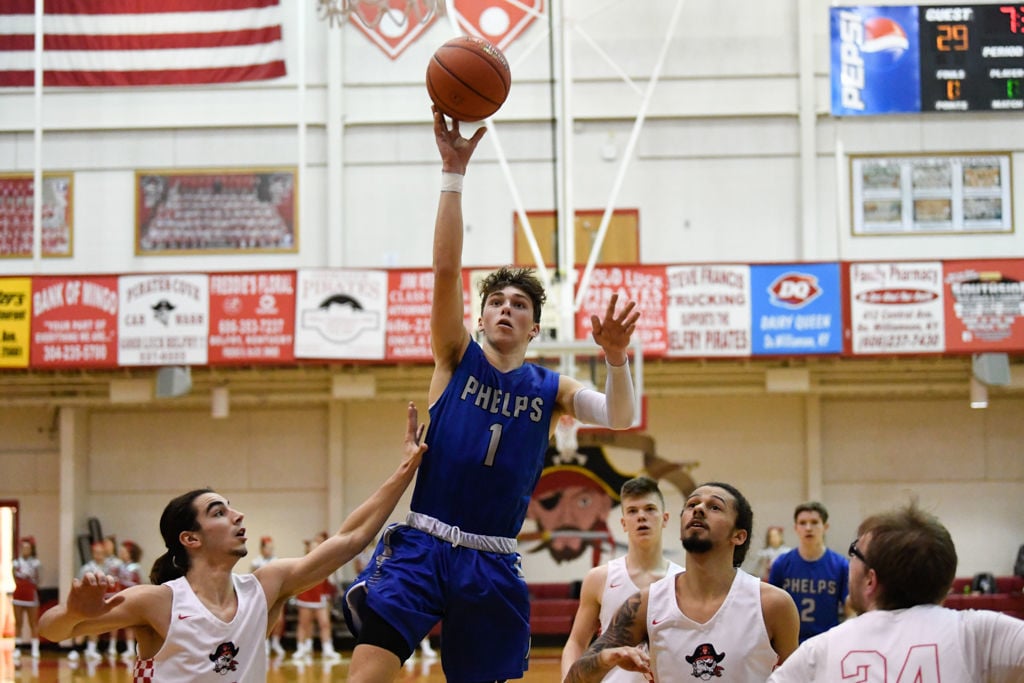 Phelps star Trey Francis shoots a floater in the Hornets game at Belfry in the 2018-19 season. 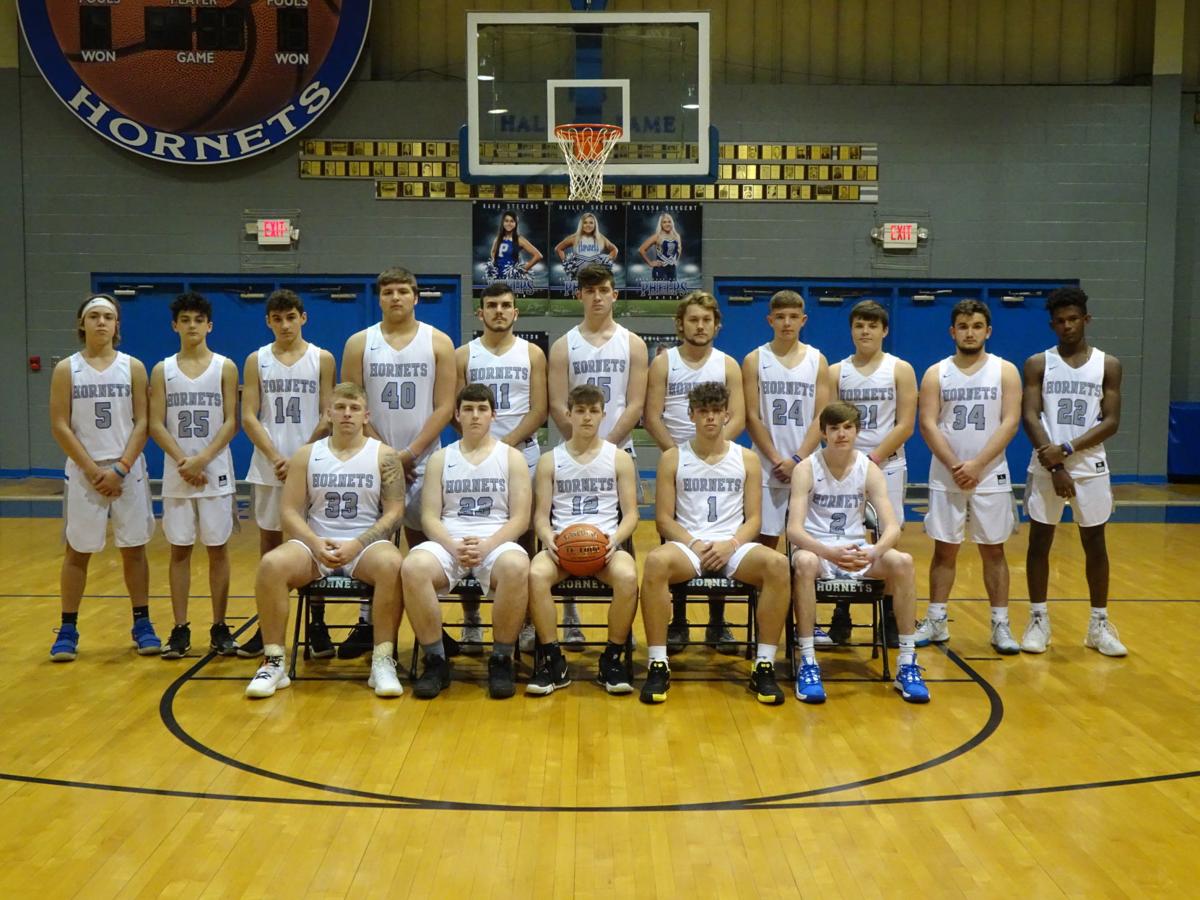 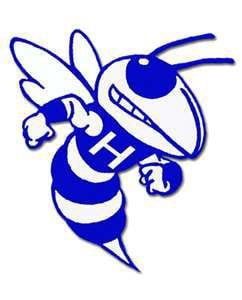 Phelps guard Jason Casey drives to the basket in a game against Mingo Central in the 2019 Hatfield and McCoy Shootout at the Williamson Fieldhouse.

Phelps junior Dominick Francis goes to the hole in a game against Magoffin County in the 2018 Mountain Schoolboy Classic.

Phelps forward Seth Mayhorn powers to the basket during a game in the 2018 Mountain Schoolboy Classic at Belfry High School.

Phelps senior guard Cameron Sanson takes a baseline jumper while coach Jason Sanson looks on in the background during the 2018 Mountain Schoolboy Classic.

Phelps star Trey Francis shoots a floater in the Hornets game at Belfry in the 2018-19 season.

PHELPS, Ky. — Head coach Jason Sanson and the Phelps basketball team ended last season with a 15-15 overall record but added their first 60th District Championship since 2012 with a 39-36 win over Pike Central in the title game.

The good news for PHS is that all of their top scorers from last season return this upcoming season.

Only guard Brandon Turnmire was lost to graduation, so that means the Hornets will be in a great position to be more successful than they were last year.

“We have some experience, and we feel like that will help us coming into this year,” Sanson said. “We’re hoping with the experience and returning all five starters that we’ll be ready to go. We’re trying to find some role players to come off the bench to help us out. We got some younger guys that’s stepping up that are freshman and aren’t there yet and they’re not ready to go but they’re improving every day.”

Trey Francis, 6-foot-4 and Phelps’ leading scorer from a year ago, was named captain of the WDN 2019 All-Area first team. Last year was the second consecutive season that he averaged more than 17 points in each game, and he ran the point for the Hornets and really has an exceptional all-around game.

He also averaged a double-double last season by notching 10.6 rebounds per contest to go along with his 17.6 points per game, as well as getting it done in the passing game with over five assists a night.

Francis has tacked on 1,373 points in his career playing for the Hornets, and he has length and athletic ability that has caught the eye of area colleges. One of them is UPIKE and head coach Kelly Wells, who has sent him an offer to play basketball there.

“Trey’s a great player,” Coach Sanson said. “He’s a top five player not only in the region but the state. He was ranked high in rebounding last year in the state, he sort of does it all for us. He passes well, scores well, handles the ball well, and he does all the things well that we want him to do. We just want him to step up and be more aggressive this year and be a leader of our team.”

Aside from Trey Francis, Sanson pointed out other members of his attack that he expects to take another step up this campaign.

“Dominick Francis is returning,” Sanson said. “He’ll play a four position and we’ll look to him for some points. We have our guards coming back with Jason Casey and Cameron Sanson. We’re looking for Cameron to help us out a little bit to score. Both of those guys are real fundamental, but they don’t put a lot of points up, so we look for both of those guys to do more scoring. We got our big boys in the paint in Seth Mayhorn and Landon Dotson (1.4 ppg), both football guys. It’ll take a month or two to get those guys lined out, but both of those guys were go to guys for us toward the end of last year, and we think they’ll do some big things also.”

In both of Phelps 60th District Tournament games last seasons, they held both Belfry and Pike Central to 36 points, and Sanson said he believes his team can replicate that defensive play throughout the season.

The Hornets will play in a bevy of regular season tournaments this season, such as the WYMT Mountain Classic, the Smoky Mountain Classic, the Mountain Schoolboy Classic and Hatfield-McCoy Shootout, as well as the 15th Region All “A” Classic. They will also have tough foes in the 15th region, and that is something Sanson couldn’t gloss over.

“This year, having five seniors and returning all five starters, we feel like we need to play a little tougher competition to get us ready for the regional tournament,” he said. “Last year, everybody seemed to be okay with just making it to the regional tournament. You mentioned the WYMT, we’ll be playing Hazard in the first round, top team in the 14th Region, so it’s a tough task, and depending on who we play in the next round, that’s going to be a tough tournament. We’re going to Gatlinburg for the Smoky (Mountain Classic) tournament. We’re playing a team out of Florida, a 6A team.

“All of these teams are top teams in their state,” Sanson added. “We’re hoping that the strength of schedule, not only in the 15th Region, but playing teams from out of our region will get us prepared, if we’re fortunate enough to make it out of the district, for the regional tournament.”

Sanson said he believes it can be a successful season, but he couldn’t neglect to point out the adversity his team is dealing with right now.

“We’re battling some things here early on,” he said. “We have some injuries. Jason Casey is having hip trouble, Trey Francis turned his ankle, we’re getting our football guys out late, and a couple guys with the flu. We’re hoping to get those things out of the way and get going. I think it will be a slow start in December and half of January, sort of like last year, but I think we’ll pull it together whenever we get into February and get into the district and regional tournaments.”

PHS will open this new campaign on Monday, Dec. 2 against 15th Region foe Pikeville at the McCoy Athletic Center.