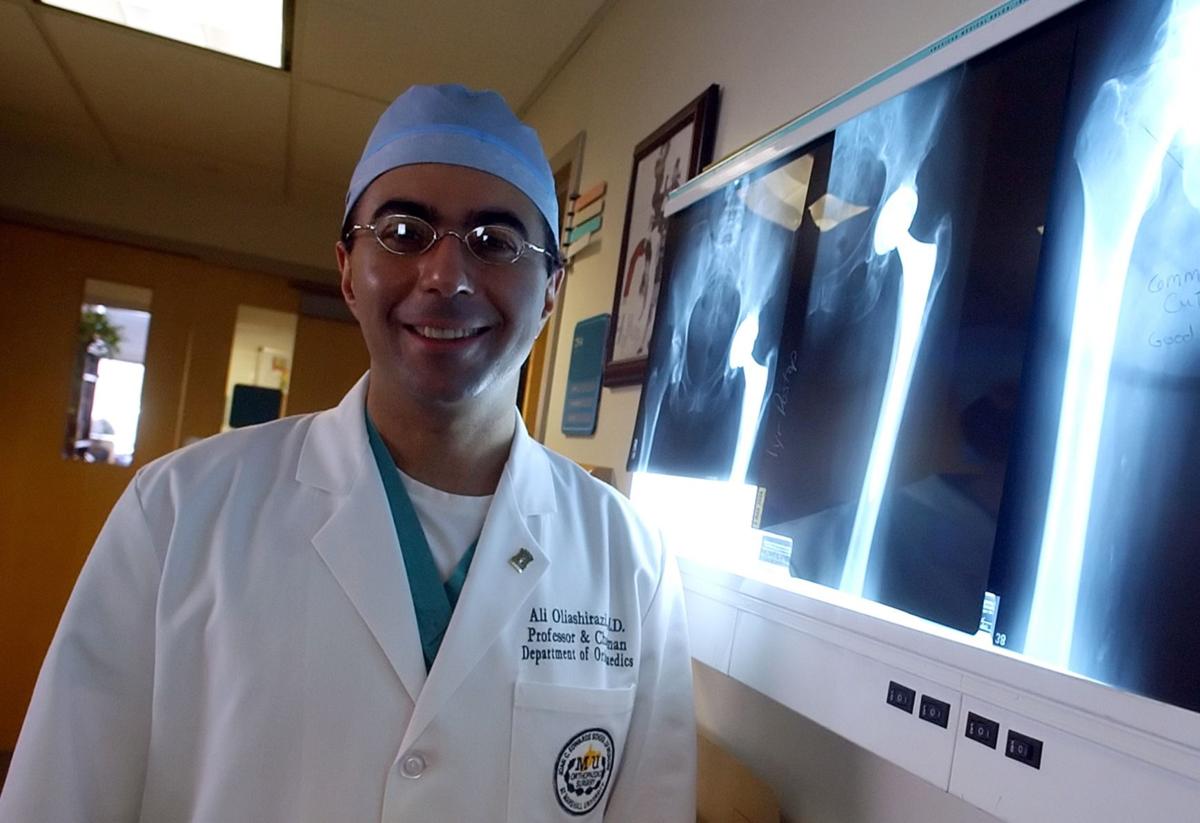 Lori Wolfe/The Herald-Dispatch Dr. Ali Oliashirazi is the professor and chairman of the Department of Orthopedics at Cabell Huntington Hospital. He is the leader of the orthopedic residency program at the Marshall University Joan C. Edwards School of Medicine. 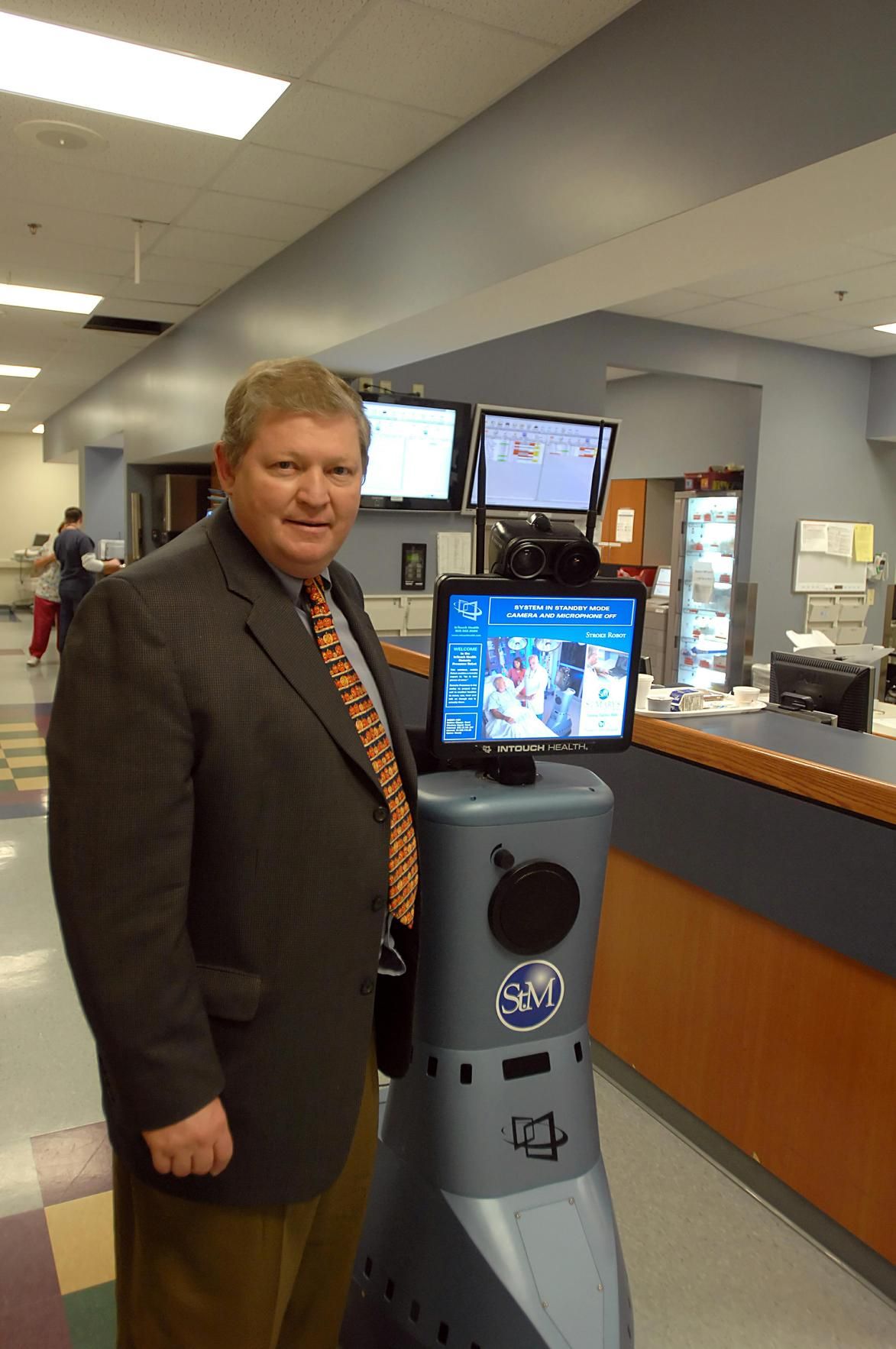 Chris Harris/The Herald-Dispatch On Oct. 10, 2008, Dr. Carl McComas displays a robot named "Pearl," which can be controlled via his office at St. Mary's Medical Center. "Pearl" gives physicians a remote presence and can be utilized from the physician's office.

Lori Wolfe/The Herald-Dispatch Dr. Ali Oliashirazi is the professor and chairman of the Department of Orthopedics at Cabell Huntington Hospital. He is the leader of the orthopedic residency program at the Marshall University Joan C. Edwards School of Medicine.

Chris Harris/The Herald-Dispatch On Oct. 10, 2008, Dr. Carl McComas displays a robot named "Pearl," which can be controlled via his office at St. Mary's Medical Center. "Pearl" gives physicians a remote presence and can be utilized from the physician's office.

HUNTINGTON — Medical care has come a long way since the early part of the 20th century. In Huntington, services are expanding faster than ever, some say.

Now home to two hospitals, a medical school, a VA medical center and other programs, Huntington facilities continue to train physicians and offer countless services, and the health-care industry has grown into the Tri-State’s biggest employment base.

“We used to have to send patients out of town off and on for complicated conditions. Now we can take care of almost everything,” said Dr. Joseph B. Touma, an ear and balance specialist who came to Huntington in 1971.

Touma said the growing sophistication of the local medical community has been phenomenal and Huntington is on the “cutting edge” in every area of medicine.

“We’re becoming a center of significance,” he said.

Medical facilities have expanded at “dizzying speeds” in Huntington, Touma said. From the heart institute at St. Mary’s Medical Center to the cancer center at Cabell Huntington Hospital, the growth and specialization are impressive, he said.

“I think everyone would be proud and amazed by the growth St. Mary’s Medical Center has seen in the past 85 years,” said Michael Sellards, president and CEO of St. Mary’s Medical Center. “The Pallotine Sisters started their 35-bed hospital with little money and limited resources in 1924. Many of the sisters performed multiple tasks, serving as nurses during the day, and cooks and custodians in the evening. The hospital has gone through multiple major expansions since then, growing to become the largest hospital in the Tri-State, with 393 licensed beds. St. Mary’s is also the largest private employer in Cabell County, with 2,491 employees.”

About three miles away, Cabell Huntington Hospital opened its doors to patients in 1956. The hospital started with 89 beds and 169 employees and now has 303 beds and 2,300 employees, according to information from the hospital’s media relations department.

“In recent years, Cabell Huntington Hospital has grown significantly in scope of services, the number of patients treated and in the number of physicians on our medical staff,” said Brent A. Marsteller, president and chief executive officer of Cabell Huntington Hospital. “Our growth has been enabled by a strong relationship with the Marshall University Joan C. Edwards School of Medicine that helps us define ourselves as an academic medical center where gifted physicians offer the region’s most leading-edge care and treatment.”

The Joan C. Edwards School of Medicine at Marshall University was established in 1977 and is now housed on the campus of Cabell Huntington Hospital, in cooperation with the Huntington VA Medical Center. The school’s first class started in 1978 and graduated in 1981. The first entering class had 24 students. Today’s classes have more than triple that number.

The school has more buildings, residents, fellows, faculty and programs than ever, said Dr. Charles H. McKown Jr., vice president of health sciences and dean of the School of Medicine.

The school has approximately 1,200 graduates, about 330 of whom practice within 50 miles of Huntington, according to Beverly McCoy, School of Medicine spokeswoman.

The school accounts for approximately 60 percent of Huntington’s 460 physicians, either because they are faculty physicians, trained here or were recruited to the faculty, according to information from McCoy.

Since the first CT scanner was installed in 1982 to its current plans for a children’s hospital, Cabell Huntington Hospital also has grown. In 2003, it opened its first Family Medical Center facility in Kenova. Since then, satellite offices have opened in Milton and Barboursville, an urgent care facility opened on 5th Avenue, and a Women’s and Family facility opened on 20th Street.

At St. Mary’s, growth also has been steady and continued this past year with family medical centers opening in South Point, Ironton, Coal Grove and Chesapeake, Ohio.

Marsteller said the successes at Cabell Huntington are a testament to the hospital’s employees. The hospital has seen growth in such areas as its neonatal intensive care unit and emergency and trauma department in the new North Patient Tower.

In 2005, the Edwards Comprehensive Cancer Center was dedicated at Cabell Huntington, and in 2007 the $84 million North Patient Tower opened.

“For more than 50 years, Cabell Huntington Hospital has met this community’s health care needs by providing specialized care for patients of all ages,” Marsteller said. “We are proud of our position in this community as a health care leader and look forward to bringing services to this community that will help families remain close to home when they seek medical care.”

Also in 2007, the Marshall University Department of Neuroscience was established, adding a team of neurologists and neurosurgeons to medical staff at Cabell Huntington.

St. Mary’s also opened a new $6 million parking garage in 2008, and a newly renovated lobby will open in 2009. Cancer patients also will be served by a new infusion center in 2009.

Sister Celeste Lynch and Sister Diane Bushee have been with St. Mary’s for many years.

“I think at St. Mary’s we care for people at the most critical moments in their lives. It could be the joy of childbirth or it could be the sadness of a debilitating illness or death,” Lynch said.

St. Mary’s gives back to the community in many ways, from offering memorials for families to providing educational and employment opportunities.

“We think we make a big contribution to helping with the supply (of staff) so that the patients get the care they need,” she said.

The progress made across facilities in Huntington has been tremendous, said Touma, who is also a professor at the Marshall School of Medicine with privileges at both Cabell Huntington Hospital and St. Mary’s Medical Center.

Over roughly the past decade, the Joan C. Edwards School of Medicine has seen more than $100 million in new construction, starting with the Marshall University Medical Center in 1998 and including the Byrd Clinical Center, the Robert C. Byrd Biotechnology Center, an addition to the Forensic Science Center and the Edwards Comprehensive Cancer Center.

The school started with just $7,000 in the bank. Today, it has a budget of $120 million, with 60 percent of that coming from faculty activities such as medical care and research.

But, McKown said Huntington would not have a medical school without having a VA in town.

Under the Veterans’ Administration Medical School Assistance and Health Manpower Training Act initiated by Congress, a VA hospital and state university had to be in the same town. The VA agreed to pay for the school for four years if the state agreed to sustain it thereafter, McKown said.

About 11 percent of the school’s budget comes from the state now.

“The state does help us tremendously and their help is critical, but we are self-funded by 90 percent of what we do. That is a tribute to the community, to Cabell Huntington Hospital, St. Mary’s Medical Center and the Veterans Administration hospital,” McKown said.

He said the school’s students, residents and fellows rotate through the VA every day. The facilities work together closely.

“This is the best relationship between a VA and a medical school that I’ve experienced in my career,” said Edward H. Seiler, director of the Huntington VA medical center and who has worked at 10 teaching VA medical centers over the years.

“We work in conjunction with St. Mary’s and Cabell Huntington to establish a rotation for students and residents for their medical education,” Seiler said.

He said a large number of the VA’s medical staff also have faculty appointments at the medical school.

Seiler said the reputation of the Huntington area as a center of medical excellence has grown over the past 20 years because of the Marshall School of Medicine.

“It’s because of the medical school that Huntington benefits from having such a high caliber of medical practice in the community. When you’ve got hospitals like St. Mary’s and Cabell Huntington and the VA in a city of 50,000 people, you’ve got really excellent medical care,” he said.

McKown said staff at the school are very happy with the progress, but it must continue.

“A decade ago, we were just beginning to bear the fruits of a new medical school. We were still a small medical school with limited, very local impact, but we were in a fast accelerating mode. The last 10 years have been absolutely outstanding,” he said. “We hope we’re giving back to the community all that’s been given to us. Our numbers, I think, attest to that.”

He said the number of doctors now in Cabell County is “shocking.”

McKown said staff will continue to work toward various programs, including looking at developing residencies in neurology, neurosurgery and urology and fellowships in medical oncology and geriatrics.

The Huntington VA Medical Center also continues to expand. In the past year, the center has added 100 new staff.

With new surgical programs, developing neurosurgery and new mental health programs, growth is more than apparent at the local VA, he said.

The local medical center was built in 1932 and was almost entirely inpatient in its early days. Today, it has a huge network of outpatient programs, Seiler said, with an estimated 30,000 patients enrolled. He said that’s probably three times the enrollment of the 1960s and ’70s.

“We see about 800 to 1,000 patients a day in our various clinics, at the medical center and our (community based outpatient clinics),” Seiler said.

An additional clinic is also coming to Gallipolis, Ohio, he said.

“We’ve grown tremendously in programs, budget and numbers of patients we take care of,” Seiler said.

Touma said he expects the growth of the local medical community to continue, based on what he’s seen in the past.

“I don’t think we will lag behind any advanced medical community anywhere,” he said.

Now home to two hospitals, a medical school, a VA medical center and other programs, Huntington facilities continue to train physicians and of…

ASHLAND — Huntington is not the only area of the Tri-State with a rich medical history. The Ashland area boasts some big names of its own.