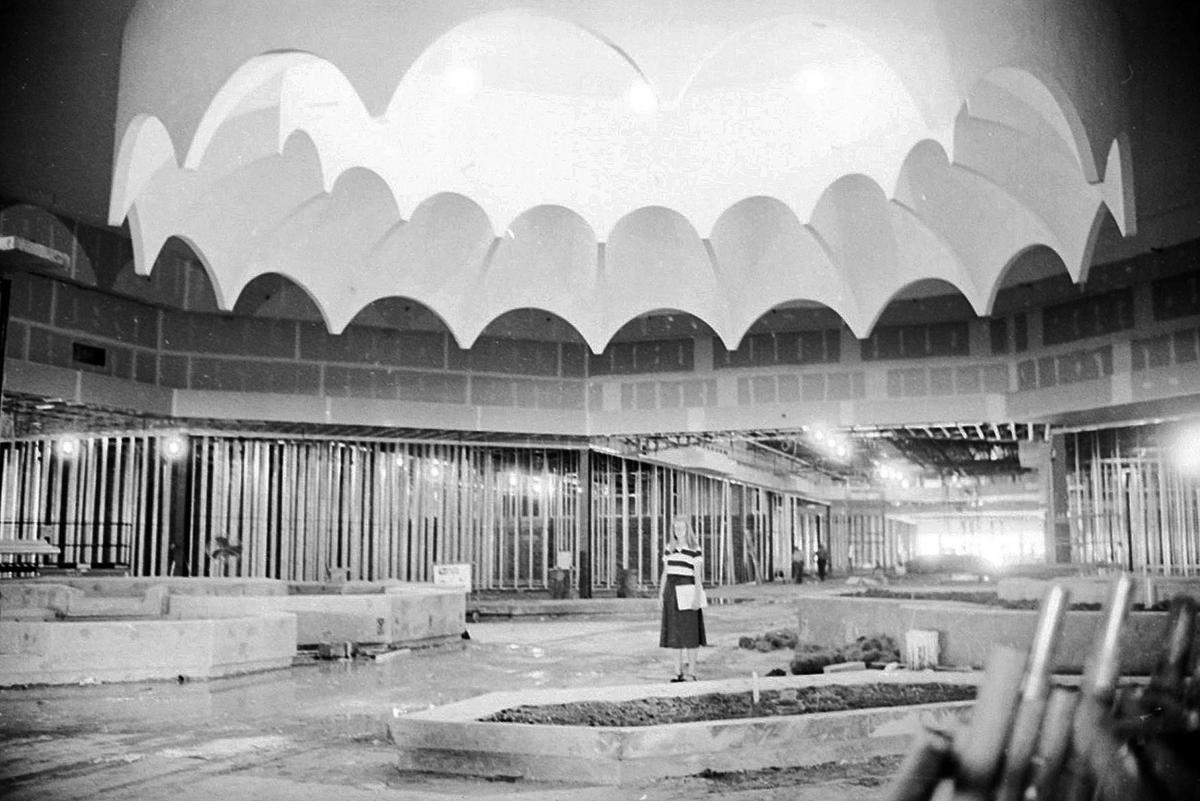 One of the domes inside the Huntington Mall begins to take shape as construction continues June 26, 1980. 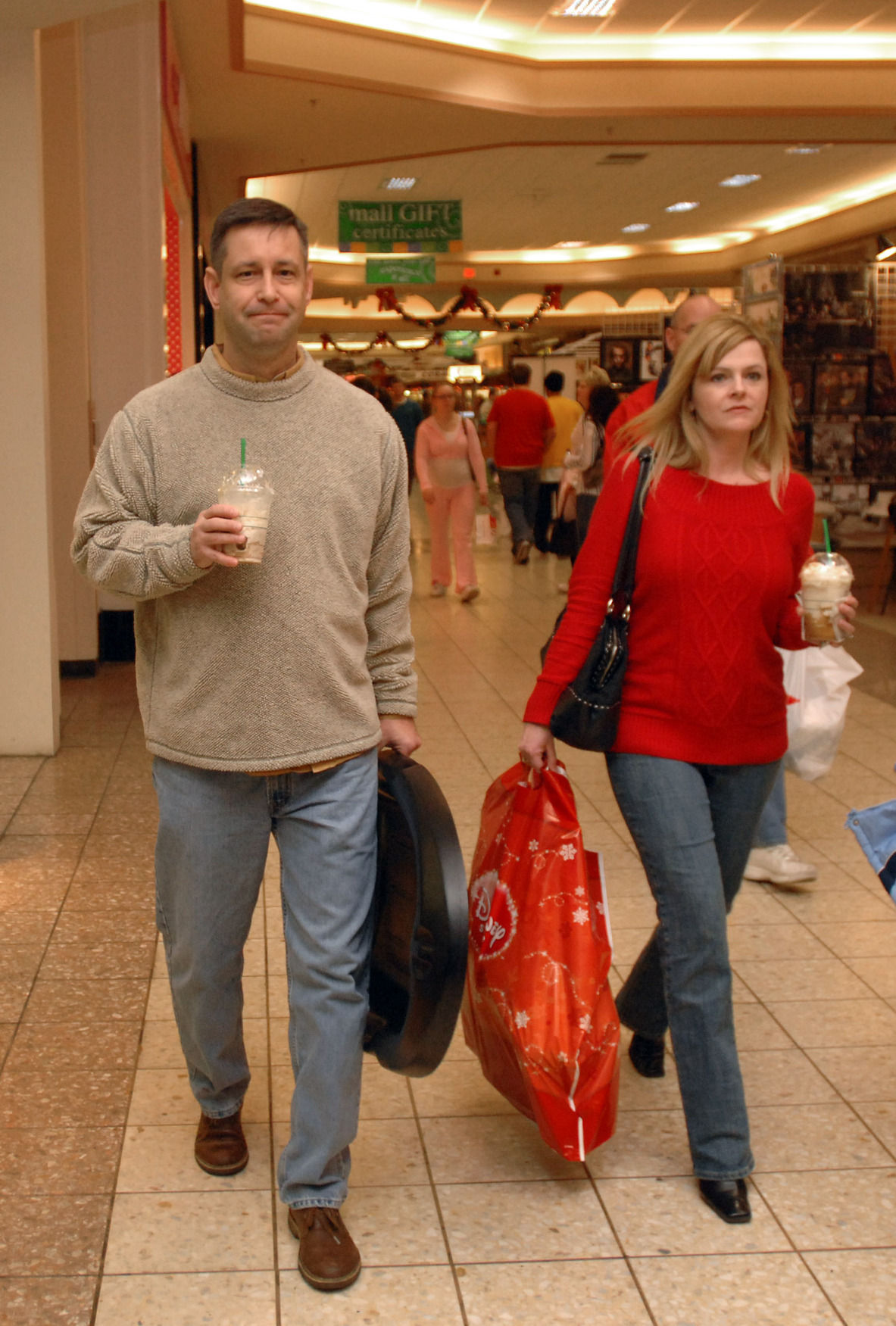 Daniel Roberts, left, and Teri Roberts walk through the mall with some last minute gifts Saturday, December 20, 2008, at the Huntington Mall.

One of the domes inside the Huntington Mall begins to take shape as construction continues June 26, 1980.

Daniel Roberts, left, and Teri Roberts walk through the mall with some last minute gifts Saturday, December 20, 2008, at the Huntington Mall.

BARBOURSVILLE — One of the largest economic booms to hit the Tri-State came within the past 30 years.

The Huntington Mall, located in Barboursville, opened in 1981, more than five years after initial talks started. Today, the mall averages in the hundreds of millions of dollars in retail trade, changing the landscape of the region’s economic climate.

Just imagine that all that property off the Ona interchange off Interstate 64 was once just considered rural.

“When the mall was built, it was a couple of local bars and an Exxon gas station,” said Joe Johnston, who has been the property manager for the mall for the past 15 years and grew up in Huntington. “Exit 20 has become a destination for Eastern Kentucky, Southern Ohio and Southern West Virginia.”

What is even more amazing is how fast the growth sprung up. The mall, which remains the largest in West Virginia, was built big —  the only anchor addition was Phar-Mor, which closed and became  Dick’s Sporting Goods in 2002. Most of the growth around it and on Route 60 happened within the past two decades.

“We’ve seen a major push in the past 20 years,” he said. “When I came on, I could see future site development. I just didn’t think it would happen as quickly as it did.”

Tri-State shoppers appeared ready for a mall of large proportions by the mid-1970s, when everyone from families to groups trekked to large shopping malls in Lexington, Ky., Columbus, Ohio, and elsewhere. In response, three developers stepped forward with plans for a Huntington area mall. Crown American Corp. wanted to build a mall at the 29th Street interchange; Interstate Properties had its eye on land near the 16th Street interchange (now Hal Greer Boulevard); and a Youngstown, Ohio-construction company had plans for a $25 million mall at the Ona interchange.

In 1977, the city of Huntington signed an agreement with Interstate, allowing for annexation of the site after the first store opened, delaying payment of business and occupation taxes until that time.

But several downtown businessmen filed a suit in March 1977, challenging the agreement. The men argued that the contract violated the state uniform tax law and the equal protection clause of the U.S. Constitution.

The argument charged that downtown retailers paid substantial taxes as part of urban renewal, while City Council delayed annexation for the mall to allow those retailers a chance to circumvent taxation.

Cabell County Circuit Judge Robert C. Conaty ruled in August that the agreement was valid, but those five months of turmoil caused hesitation among the large anchor stores. The Ona interchange became the prime target, with William Cafaro, a partner in the construction company, announcing the deal after commitments from anchor stores.

“The anchor stores drove the deal. (They) are our partners,” Johnston said. “Without the anchors, there is no mall.”

The mall was given the surname of Huntington. While it spurred animosity from the city, which desperately wanted the tax revenue that would have come with the mall, the name, Johnston said, has been crucial to its success.

“Huntington the market is a six-county metro over three states,” he said. “When national retailers see a map, they see Huntington.”

The Huntington Mall not only provided an economic hub for the area, but it also spurred rapid growth around the mall and all the way down to Route 60.

There are four hotels — Best Western, Comfort Inn, Hampton Inn and the newest, a Holiday Inn Hotel and Suites. Restaurants also are a mainstay, with a variable smorgasbord of entree choices. If you want breakfast, there’s Bob Evans or IHOP. Lunch options include the typical fast food chains, including Steak & Shake and Sonic. Dinner options include Outback Steakhouse, Olive Garden and Logan’s.

There also is a car dealership, Billy Bob’s Wonderland, a small strip of stores on the north side of Route 60 and some larger department stores across from the mall, although Value City and Goody’s both shut their doors in 2008. Drug Emporium is the mainstay now.

The Huntington Mall also has attracted a handful of stores to West Virginia. Best Buy, which opened on the former site of Best Products in 2002, was the first of now three stores in the Mountain State. Dick’s Sporting Goods, also open in 2002, was the second of now four locations in West Virginia. It was built in the former Phar-Mor location on the northwest side of the mall.

Wal-Mart also decided that two locations were better than one, closing the store at the 29th Street exit and building two SuperCenters — one on Route 60 closer to Huntington and the other on Melody Farms Road on the hill across from the mall. The mall and surrounding expansion became so big that the exit ramp and roadways had to expanded.

The mall also provides nearly all of the annual budget for Barboursville and has been integral in its development and growth.

In 2000, then-mayor and current County Commissioner Nancy Cartmill said the mall was averaging about $375 million in retail trade, transforming the village of Barboursville’s budget. The incorporation of the mall has grown Barboursville’s budget from $100,000 to around $4.8 million for fiscal year 2009, meaning no one who lives in Barboursville pays municipal fees. Tax revenue also has helped re-pave streets and sidewalks, replace sewers and build Barboursville Park. This year, $2.7 million of that budget is business and occupation tax, most of which is directly related to the mall.

With any mall, never mind the largest in West Virginia, comes a steady carousel of retailers. Many have come and gone since 1981, but Johnston said that is a natural progression. Even in what has been officially labeled a recession, he doesn’t see the mall taking a huge hit.

“Every year, good economy or bad, we are going to have three or four new stores,” he added.

Johnston said leases come up on an almost yearly basis. Some renew, some don’t — for whatever reasons. But he said the real estate department is way ahead of the game, often signing agreements a year in advance.

Still, even in the current economic climate, Johnston said the Huntington Mall has weathered the storm. And over the years, he is willing to say that most name-brand stores that shut their doors was not a reflection on sales here.

“More often that not, when I see stores close ... the decisions are made at corporate and not based directly with the performance of the store in the Huntington Mall,” he said.

He said managers of Steve & Barry’s, which closed at the end of November 2008, told him the store was doing well. But corporate restructure and bankruptcy led to dozens of locations nationwide closing up shop.

Phar-Mor, the company, also closed all its stores by 2002 after the founder and chief financial officer were both guilty of embezzlement in 1995. The company never recovered from the nearly $1 billion lost to investors.

Despite the current economic conditions, Johnston said the mall’s future is bright. Construction of a 12-screen Cinemark movie theater will replace a six-screen theater that closed in October 2006.

“The mall and the company is being led by third-generation Cafaro,” he said. “They have shown they are intent on protecting their most successful venues.

“I think the next 25 years, the mall will continue to grow, and they will protect their assets in Huntington.”

Gallery: Construction of the Huntington Mall

The Huntington Mall, located in Barboursville, opened in 1981, more than five years after in…