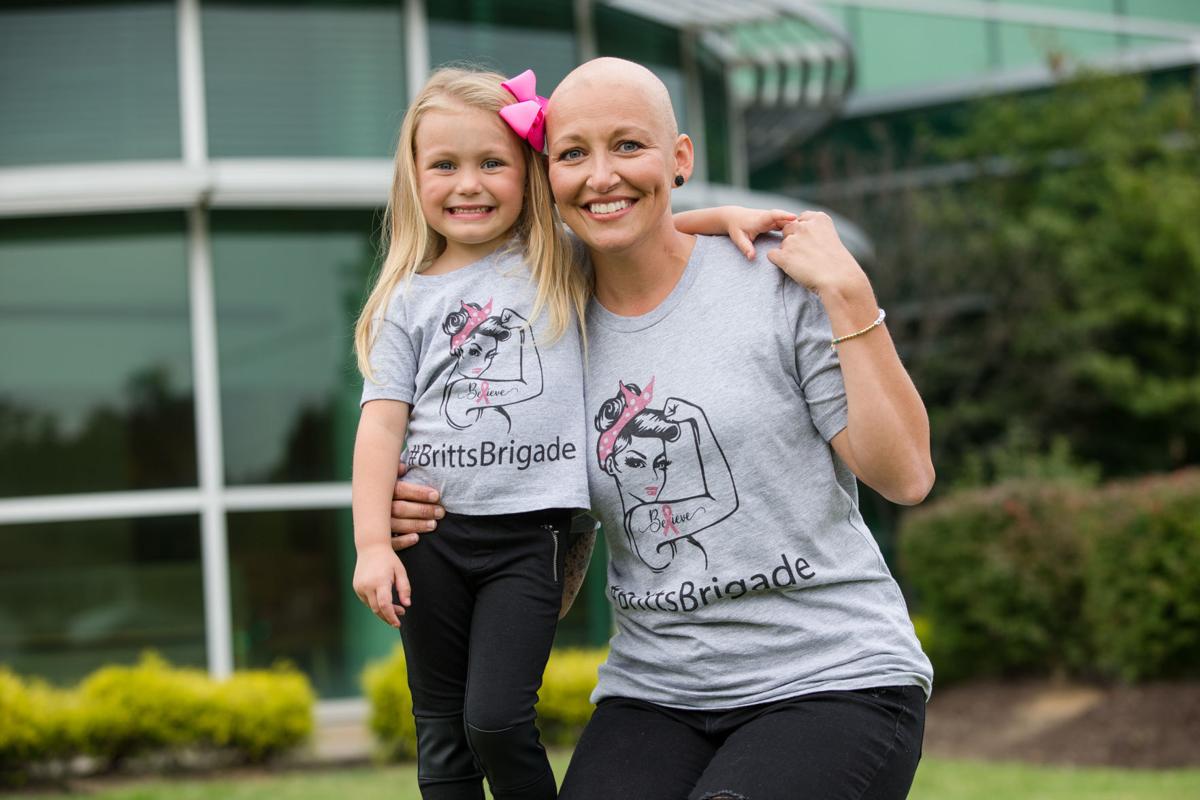 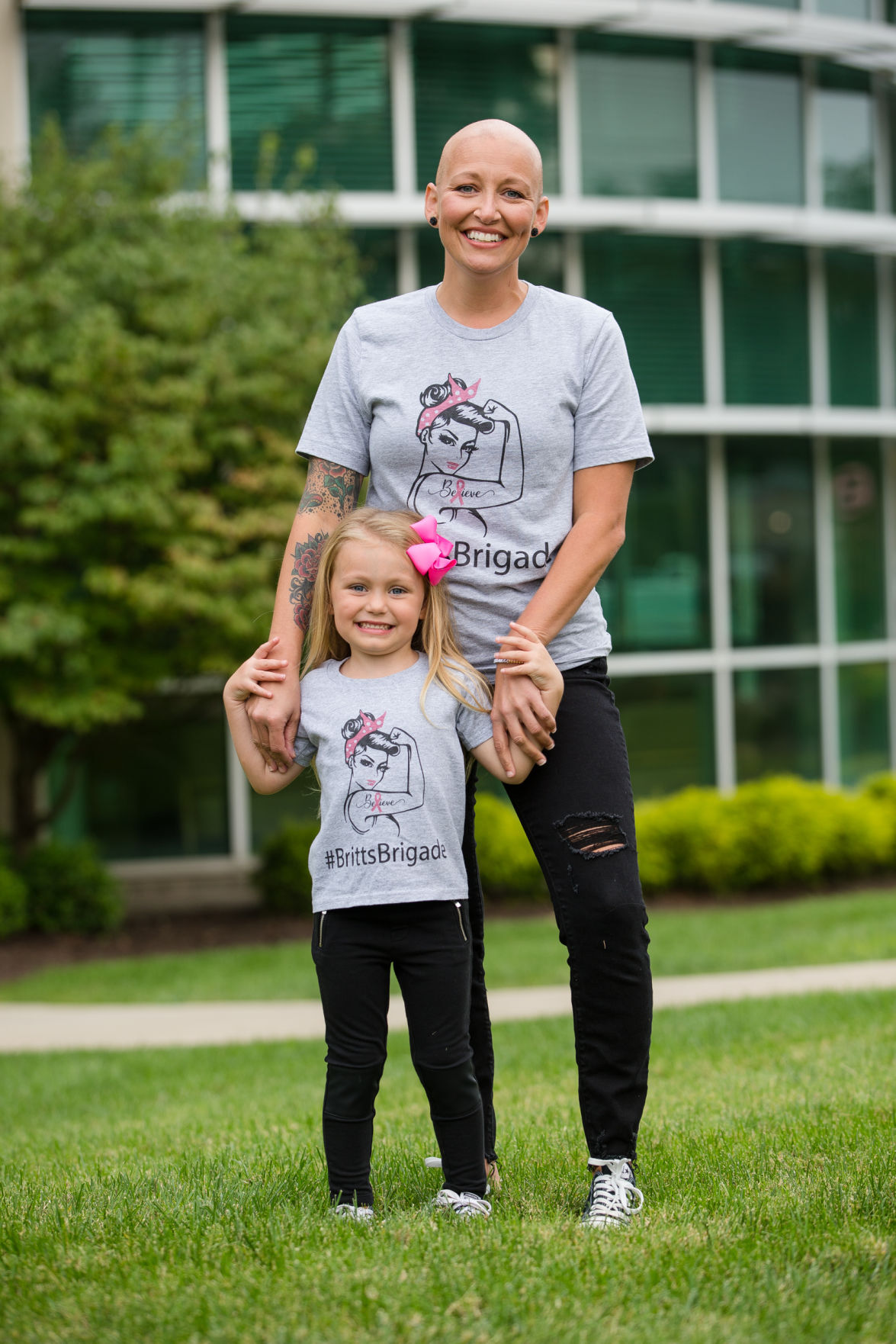 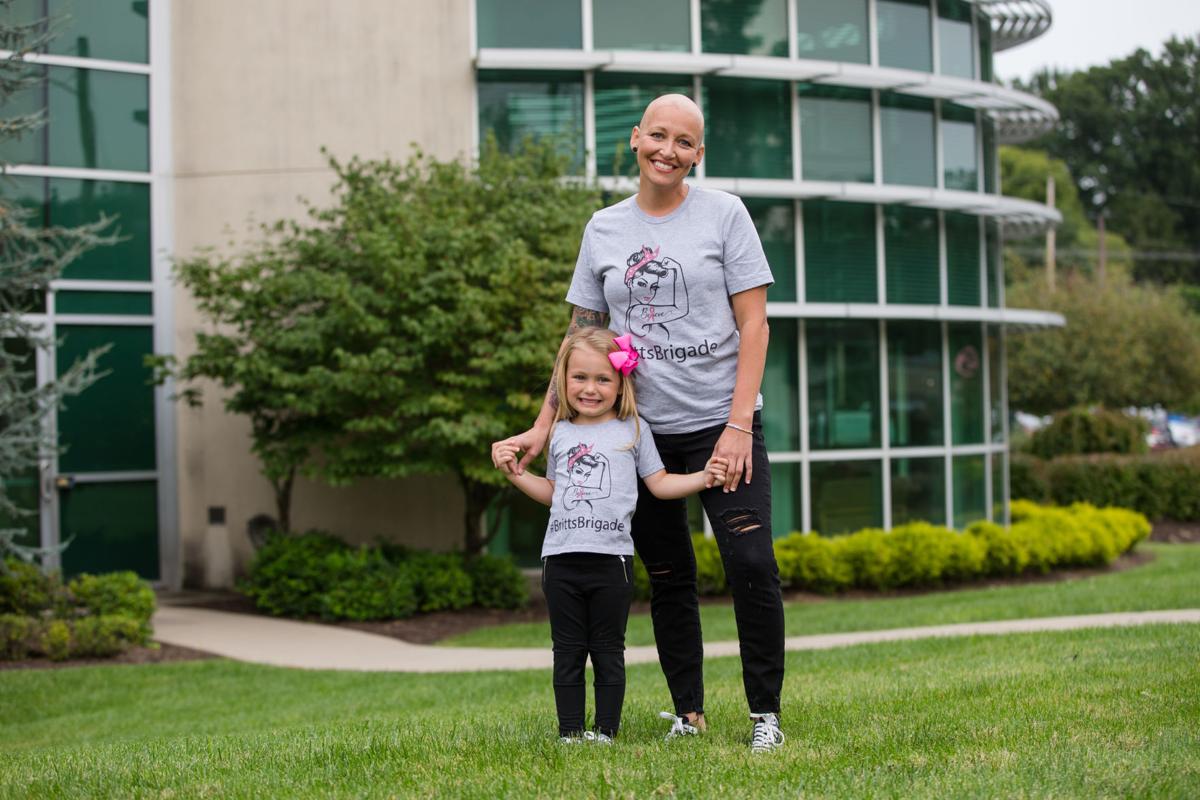 Britt Stewart and her daughter Rowen Stewart, 4, on Sept. 23 outside of the Edwards Comprehensive Cancer Center in Huntington. Britt was diagnosed with breast cancer this summer and is currently undergoing chemo treatment.

Britt Stewart and her daughter Rowen Stewart, 4, on Sept. 23 outside of the Edwards Comprehensive Cancer Center in Huntington. Britt was diagnosed with breast cancer this summer and is currently undergoing chemo treatment.

SOUTH POINT, Ohio — Thirty-seven-year-old Britt Stewart sat with her toes in the water on the beach in late September with her 4-year-old daughter by her side, a much-needed tropical reprieve before receiving another round of chemotherapy treatment upon return to South Point, Ohio, the following week.

Stewart was diagnosed with Stage 1B triple negative breast cancer in late July of this year, after months of uncertainty, testing and persistence.

Because of COVID-19, Stewart said she’s not able to see many people outside her family and close friends, but with the vacation season winding down, she saw the opportunity to enjoy a week at the ocean and took it.

In January, Stewart, who owns a photography business, started school to become an ultrasound technician, but decided early on it wasn’t the career path for her.

“I realized that’s what I was mainly going to be doing — finding masses and tumors, and telling people bad news,” she said. “So I didn’t follow through with it. A week later, I was lying in bed and feeling my breast, and I found a very small lump.”

Stewart said she didn’t think much of it at first. She’d always heard lumps signaling breast cancer were hard and tender.

“It didn’t feel hard to me, it kind of felt different. I didn’t get worried at first, but I thought, you know, I need to have that checked,” she said. “Cancer runs in my family, not breast cancer, but cancer in general.”

After an ultrasound and mammogram on Feb. 5, 2020, at the Cabell Huntington Hospital Breast Health Center, Stewart’s doctors believed the lump, about as small as a pea, was a fibroadenoma, or a benign breast tumor.

“They told me a six-month follow-up ultrasound only. But COVID hit, and it was the beginning of May when I was checking on that lump again. And I felt a new, bigger lump,” she said. “I didn’t call right away because of COVID, and I was like ‘OK, maybe it’s another fibroademona.’ They were right there together. I didn’t get too concerned, because they always ask, ‘Is it hard?’ It wasn’t any harder than the last.”

On July 2, Stewart returned for a second mammogram and ultrasound. This time, Stewart’s ultrasound showed three masses, one of which looked a little suspicious, she said.

Dr. Mary Legenza, breast oncologist at Cabell Huntington Hospital, told Stewart a biopsy was needed. But in the meantime, Stewart’s grandmother became ill and died from cancer that had returned very suddenly.

“It was the day of my grandmother’s memorial service. I was getting ready to go to it, and the phone rang from Legenza’s office,” Stewart said. “It was her, and she said ‘Your biopsy results are back,’ and she said ‘I’m sorry, but it is cancer.’ ”

Stewart said the first thought that raced through her mind was, “Am I going to die?”

After several more tests, Stewart said she found out the breast cancer was triple negative, an aggressive form of cancer where its growth is not fueled by estrogen, progesterone or the HER2 protein, making it difficult to treat.

Still, though, Legenza said because they caught the breast cancer early, Stewart would be OK — but it wouldn’t be an easy road to recovery.

“I’m getting the most powerful chemo drug they make right now,” Stewart said. “It’s called the ‘Red Devil.’ I get four of those, and I’m followed by some other very hard chemo drugs. I finish treatment around Christmas or the end of the year, and I have my last ‘Red Devil’ treatment next week. So that will put me almost two months in.”

Like many others in her shoes, Stewart sought a second opinion because she didn’t know much about breast cancer at the start of her journey.

“I knew nothing about any of this, so let’s see what someone else has to say,” she said. “I went to Ohio State, and their treatment plan was the exact same as what Edwards Comprehensive Cancer Center offered.”

Ohio State offered a clinical trial option, as well, but in the end Stewart opted to stay in Huntington for treatment because of the potency of the drugs, the coronavirus situation and to be near her family.

The importance of support

Stewart said as a single mom, her biggest support system is her mother, sister and brother.

She and her mother live only four houses away from each other, which is very convenient when she’s feeling down after her treatment, she said.

“We’re super close, and we lean on each other for everything,” she said. “Especially when all this happened.”

And while her family being near has been a lifesaver, Stewart’s journey has been different than many others’ due to COVID-19.

Gone are the days of in-person support groups and fundraising events, so Stewart’s childhood friends and her sister worked together to start a Facebook group, Britt’s Brigade, to help bring her daily virtual support.

“It has like 600 members, it keeps growing, and every day there are people posting there, giving me words of encouragement,” she said. “I can’t be around anybody because COVID is everywhere, and my immune system is very compromised right now.”

In addition, Stewart sought support from her doctors and nurses at the Cabell Huntington Breast Health Center and Edwards Comprehensive Cancer Center.

Marcia Adkins, breast health educator at Cabell Huntington, happened to be helping with biopsies on the day Stewart was to be tested — since then, she described Adkins as her “rock” during the most difficult times.

“Britt was kind of an unusual case because the day she came, I just happened to be helping with biopsies, and that’s not always my normal job,” Adkins said. “I remember her from the very beginning, I just thought, ‘What a cool person.’ ”

Adkins said Stewart has a distinct energy about her, and her fight to get to the bottom of her diagnosis was inspiring.

“She knew her body, she knew something was abnormal,” Adkins said. “She had already had an ultrasound, even before the six-month follow up, she was feeling something different and she pursued it with her doctor, which was a good thing.”

For Stewart, the road to remission is still a long one, and acceptance has been a challenge, day-in and day-out.

But she’s found comfort knowing that her story has inspired others to become more aware of their bodies, and she’s found many unexpected connections through her diagnosis that she is thankful for.

“I was sitting on the beach yesterday with my daughter, and I had a big floppy hat on. I’m bald, the sun wasn’t out, but the wind kept blowing so I took it off for a minute,” Stewart said. “A lady walked by, she was walking her dog, and she stopped and smiled at me and said ‘Are you a chemo patient?’ I said, ‘I am.’ And she said ‘I am, too.’ ”

Stewart said her mother jokes that it’s like a “secret society.”

“For cancer patients and people who have lived it, you don’t realize it until you’re involved, it changes everything,” Stewart said. “And we’re going to fight through this. It’s tough, but life is precious, so I’m going to fight till the end.