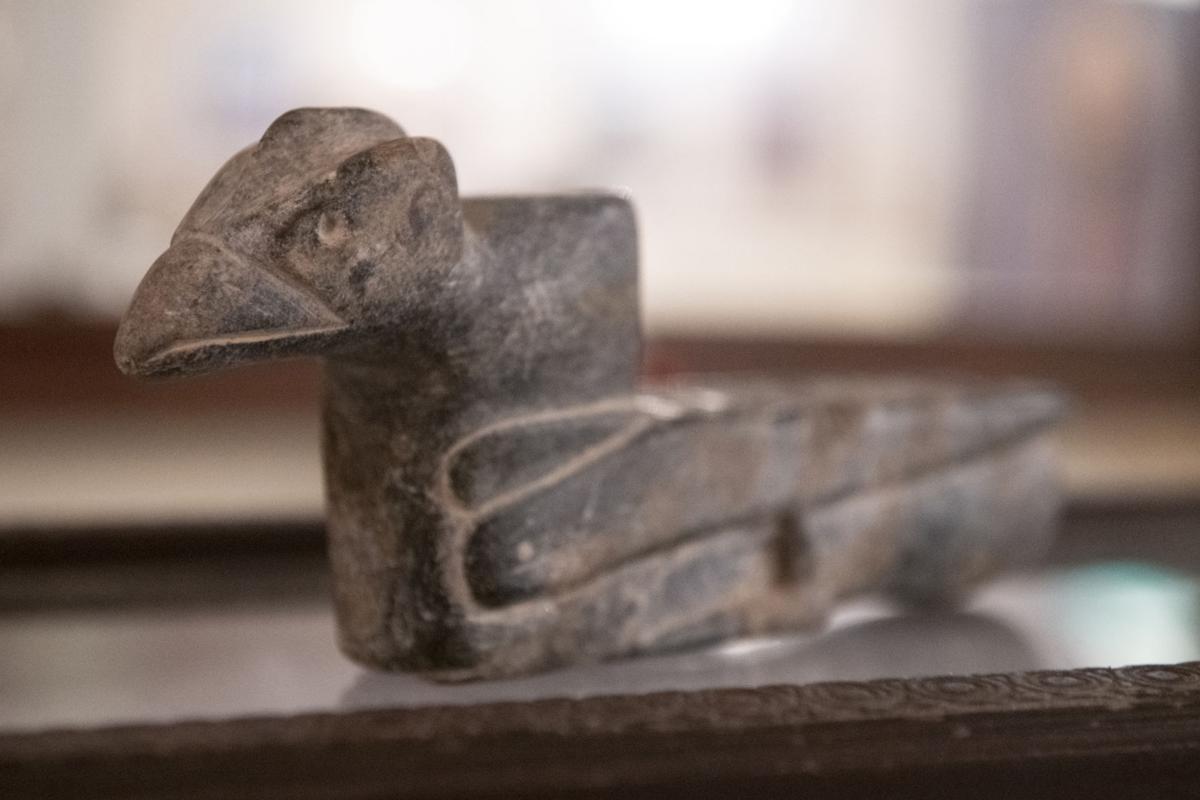 Lexi Browning/For The Herald-Dispatch An eagle-shaped artifact is displayed at Johnson Tiller Funeral Home on July 1 in Wayne County, W.Va. 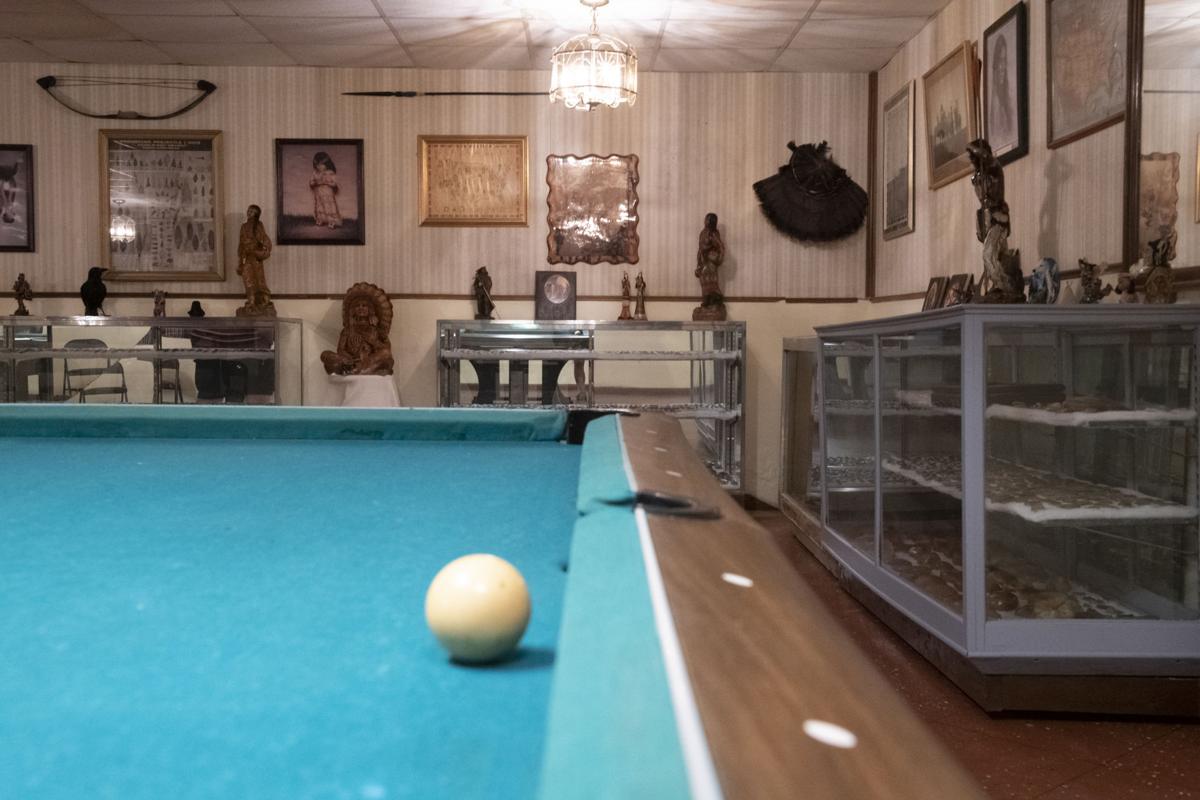 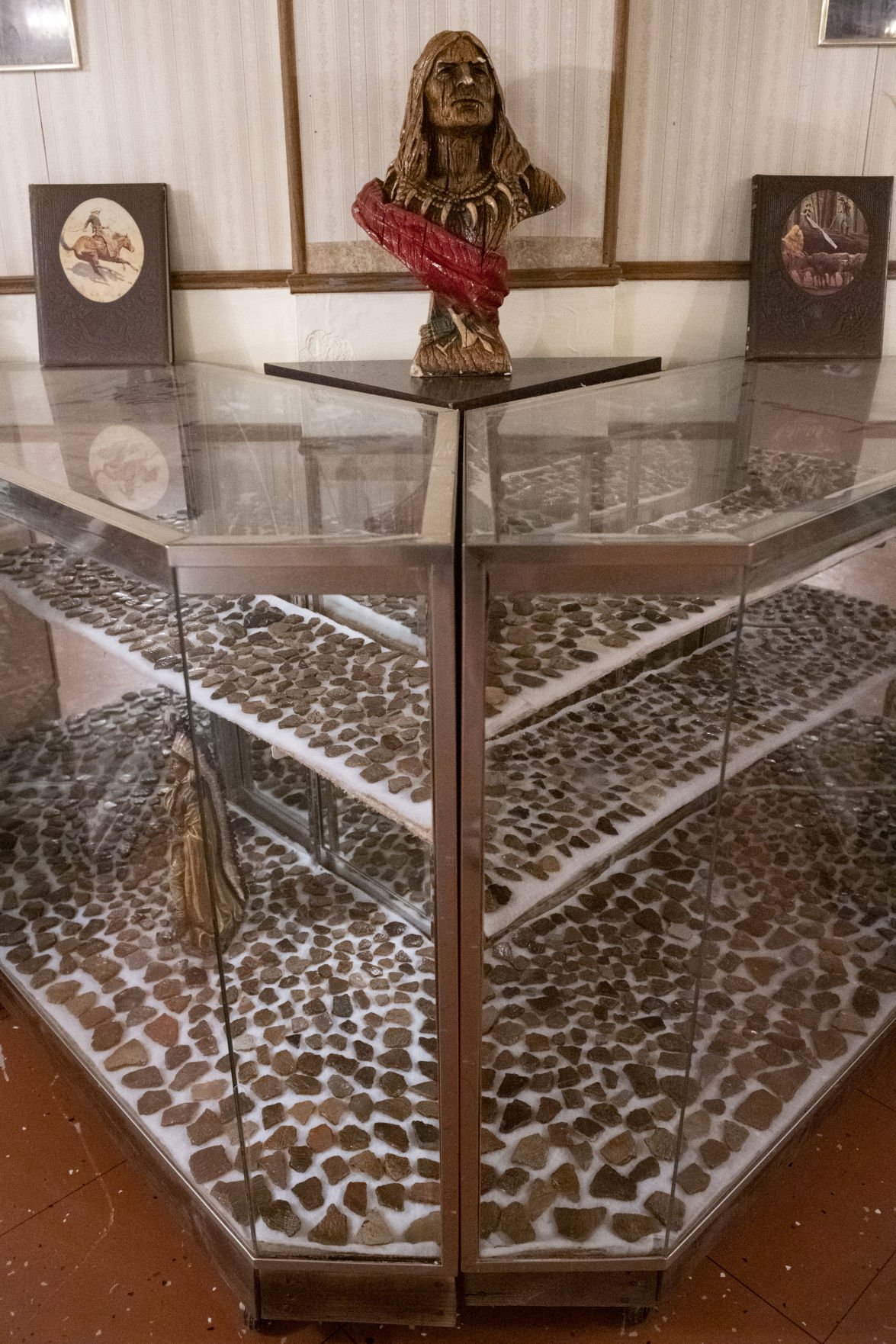 Lexi Browning/For The Herald-Dispatch An eagle-shaped artifact is displayed at Johnson Tiller Funeral Home on July 1 in Wayne County, W.Va.

Tucked away in the basement of Johnson Tiller Funeral Home in Wayne is a collection of ancient artifacts to rival the best natural history museum.

One only needs to call ahead or stop by and ask to see it. If business permits, the owner, Dewey Johnson, is happy to show off the collection.

Hidden away are thousands of Native American artifacts like arrow points, knives, bowls and other tools used by the people who inhabited this area long before the white man came along.

Chad Tiller was on hand to let the reporter and photographer in to see this fascinating collection. The reporter was able to catch up with Johnson a little later to get the full story about how such an amazing collection came to be.

Johnson started collecting arrow points and various other tools as a child growing up along Guyan River Road in Salt Rock.

"I was raised on a farm in Salt Rock," Johnson said. "All of our fields were bottom lands next to the river. When we'd plow the fields, I started seeing them. I knew what they were so I started picking them up and taking them to the barn."

The gathering of rocks wasn't the sort of thing the father of a young man on an Appalachian farm was particularly fond of seeing.

"I had an older brother, and my dad said he could get a lot of good work out of him. But that younger one - he has rocks in his head," Johnson said with a laugh.

"Probably 85 percent of what you see came from Salt Rock and the Guyan River area," Johnson said about his collection.

But everything in the collection was found within the local areas surrounding the Ohio River and its tributaries.

"I'd come out of the corn fields with my overall pockets full of them," he said.

Johnson said in order to find and build such an extensive collection, one has to know where to look.

"Everyone thinks of the Indians as living in tents all the time. That isn't true. The Shawnee, which were around here, lived in log cabins," Johnson said. "They needed water. So they lived near the water. You think of all the rock ledges around the rivers. They would gather logs from the forest and shore up the fronts of those rock ledges. Once they got them a fire going, the rocks would hold the heat and they had it pretty nice."

Johnson talks about finding artifacts around the rock ledges, including shells from freshwater mussels.

"There are shells above the flood plains," Johnson said. "So how did they get there? Those were good sources of protein. I remember swimming in the Guyandotte River and there'd be clams all over the place. That was before the pollution and everything killed them off."

Johnson is a treasure trove of information regarding the topic. At 80 years old, he has spent a good portion of his life learning about the topic.

Some of the items he's found and places he's visited can go all the way back to 25,000 years before Christ.

Johnson said the fields where he found most of the arrowheads are no longer corn fields.

"Nobody plants feed corn anymore," he said. "There's not the demand. Those fields are now hay fields."

A few pieces have been donated to him.

One of the eye-catching items in the collection are stone smoking pipes. Those were given to Johnson, but were found in the ground in Proctorville, Ohio.

"That came from the McCormick Farm," Johnson said. "The big one was used as a door stop. Mrs. McCormick was an old retired school teacher."

It started as mistaken identity of the artifact, but McCormick wanted Johnson to see it.

"She told me, 'I have an old Indian club,'" he said. "I told her I'd like to see it. She went back in the house and came out holding it against her stomach and waving around the other pipe and I was thinking 'Oh, I hope she don't drop that.'"

His collection, or parts of it, have been on display at Marshall University and the Cabell County Public Library's main branch in Huntington. But it's currently all back home at the funeral home.

"That's not everything," Johnson said. "I have more, but I don't have any more cases."

It's been a lifelong hobby for Johnson, who said he doesn't have much time for it anymore. But that doesn't mean he can't tell you where some ancient history is still visible.

"I can take you right now to a carving of a life-size Indian chief," he said. "It's out in Salt Rock near the river. We used to play on it as kids. There used to be a farmer who would get aggravated at people for coming on his property to look at it. But some Marshall professors came out and pretty much told him that belonged to history and the state of West Virginia."

It's a hobby that has offered Johnson years of fun and learning.

"I've enjoyed them all my life," Johnson said.