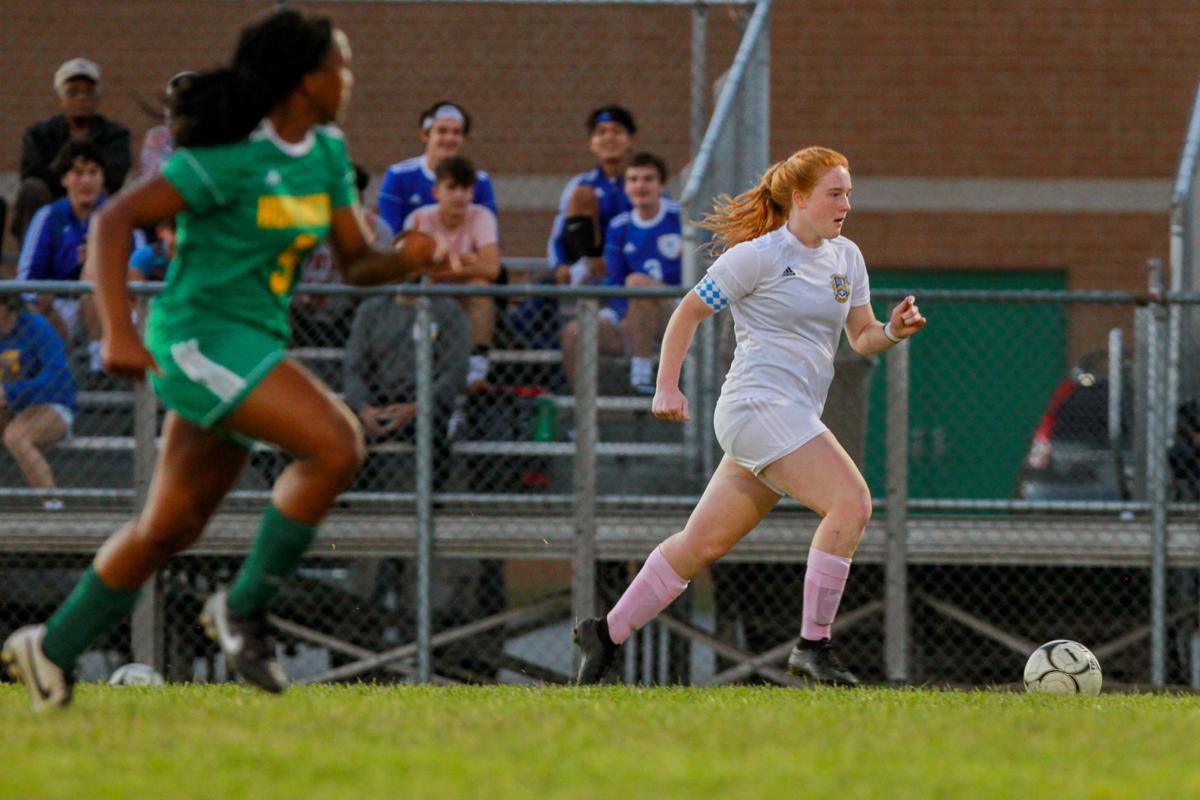 Huntington St. Joe's Abby Lee (12) charges past midfield toward the Huntington High goal as the Irish take on the Highlanders on Tuesday, Oct. 15, 2019, in Huntington. 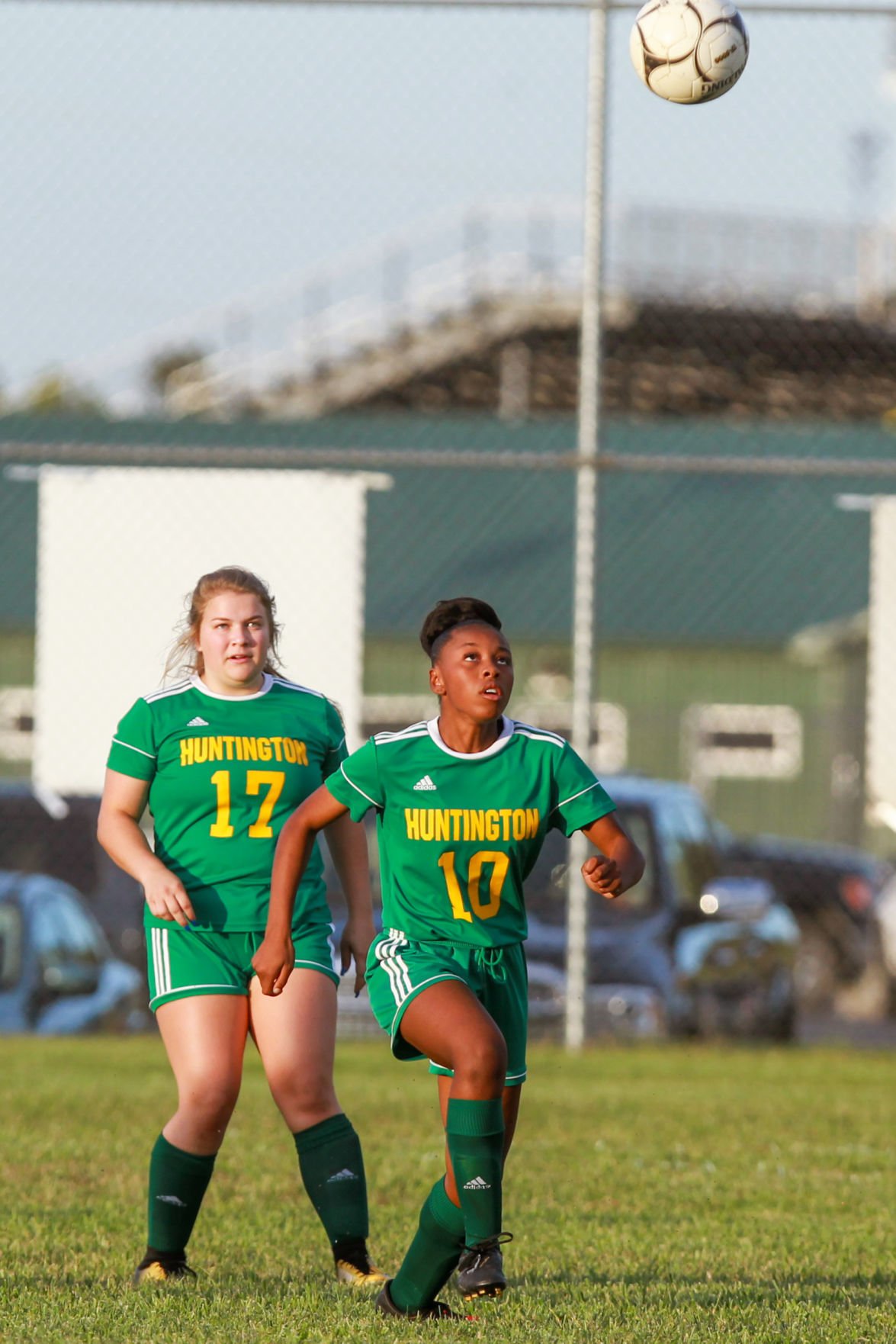 The Highlanders' Makenzie Grier (10) keeps her eyes on the ball as the Huntington High School girl's soccer team plays against Huntington St. Joe on Tuesday, Oct. 15, 2019, in Huntington.

Huntington St. Joe's Abby Lee (12) charges past midfield toward the Huntington High goal as the Irish take on the Highlanders on Tuesday, Oct. 15, 2019, in Huntington.

The Highlanders' Makenzie Grier (10) keeps her eyes on the ball as the Huntington High School girl's soccer team plays against Huntington St. Joe on Tuesday, Oct. 15, 2019, in Huntington.

HUNTINGTON — Huntington St. Joe wanted payback for its loss to Huntington at the YMCA Kennedy Center in 2018 and got that Thursday, this time at the Highlanders’ Scotland Yard, as the Fighting Irish won the girls soccer match 5-2.

Abby Lee, a senior at Huntington St. Joe who was on the field when her team lost last season, led the Fighting Irish (12-4-1) to a win with all five goals.

Lee was set up for a goal at 15:55 by fellow senior Abi Hugh to give Huntington St. Joe a lead. It appeared its Class AAA cross-city rival Huntington High wouldn’t go quietly, however.

Missing several players from its roster due to injuries, Huntington (7-8-2) got a goal from sophomore Claire Burbery just 3 minutes, 34 seconds later that tied the game at 1-1.

Lee scored her next three goals unassisted to build a 4-1 St. Joe advantage at halftime.

The Highlanders seemed to wake up from their slumber in the second half as they began to apply offensive pressure to the Fighting Irish. Junior Jalen Nicely cut St. Joe’s lead to two goals when she picked up an unassisted goal off a long shot from the right wing that sailed over Fighting Irish goalkeeper Samantha Richbart.

Nicely nearly came through again minutes later off another long shot from the same side that would have cut the lead to one. However, Nicely’s shot sailed higher and wide of goal and was misplayed at the net by her teammates and allowed St. Joe to steal possession.

“I really think that we just weren’t able to get it together. We’ve had a really rough couple of weeks,” Nicely said. “We’ve had a lot of injuries to our starters. I felt like it was hard for us to play together as a team when we’re constantly losing the people we’ve been playing with.”

Huntington head coach Tony Shackelford said the team was down four starters due to injuries, including one of the team’s leading scorers Marissa Riggs, who missed Thursday’s game with a concussion.

“She’s third on the team on scoring, so that’s a big loss,” Shackelford said. “Plus, she runs track. She has that track speed, so she’s everywhere. That hurt us tonight.”

On Lee’s second goal, Huntington goalkeeper Jordan Maynard left the game with an injury and would not return until the second half. During that stretch from 28:51 until after halftime St. Joe scored two more goals.

Maynard surrendered one goal after returning — Lee’s fifth goal of the night, on an assist by Hugh at 58:04 — and the Fighting Irish defense kept Huntington from getting any good looks at the goal.

“It was awesome; I wouldn’t have done it without the assists from my teammates,” Lee said before being informed that three of her goals were unassisted. “Wow. I’ve never done that before.

The match was the final regular-season game for Huntington, which now gets the next five days to mend its injuries before beginning Class AAA, Region IV, Section 2 tournament play on Monday.