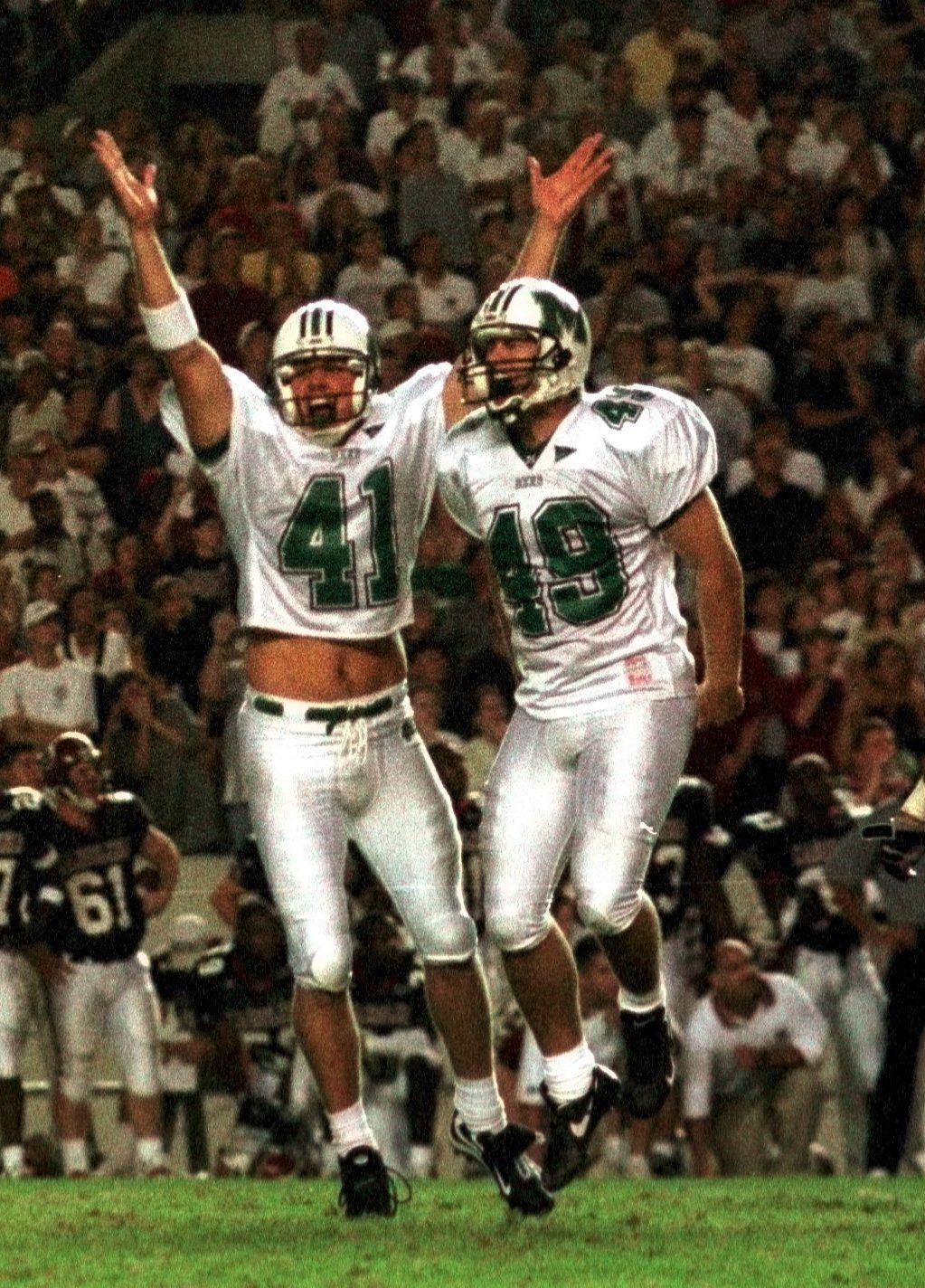 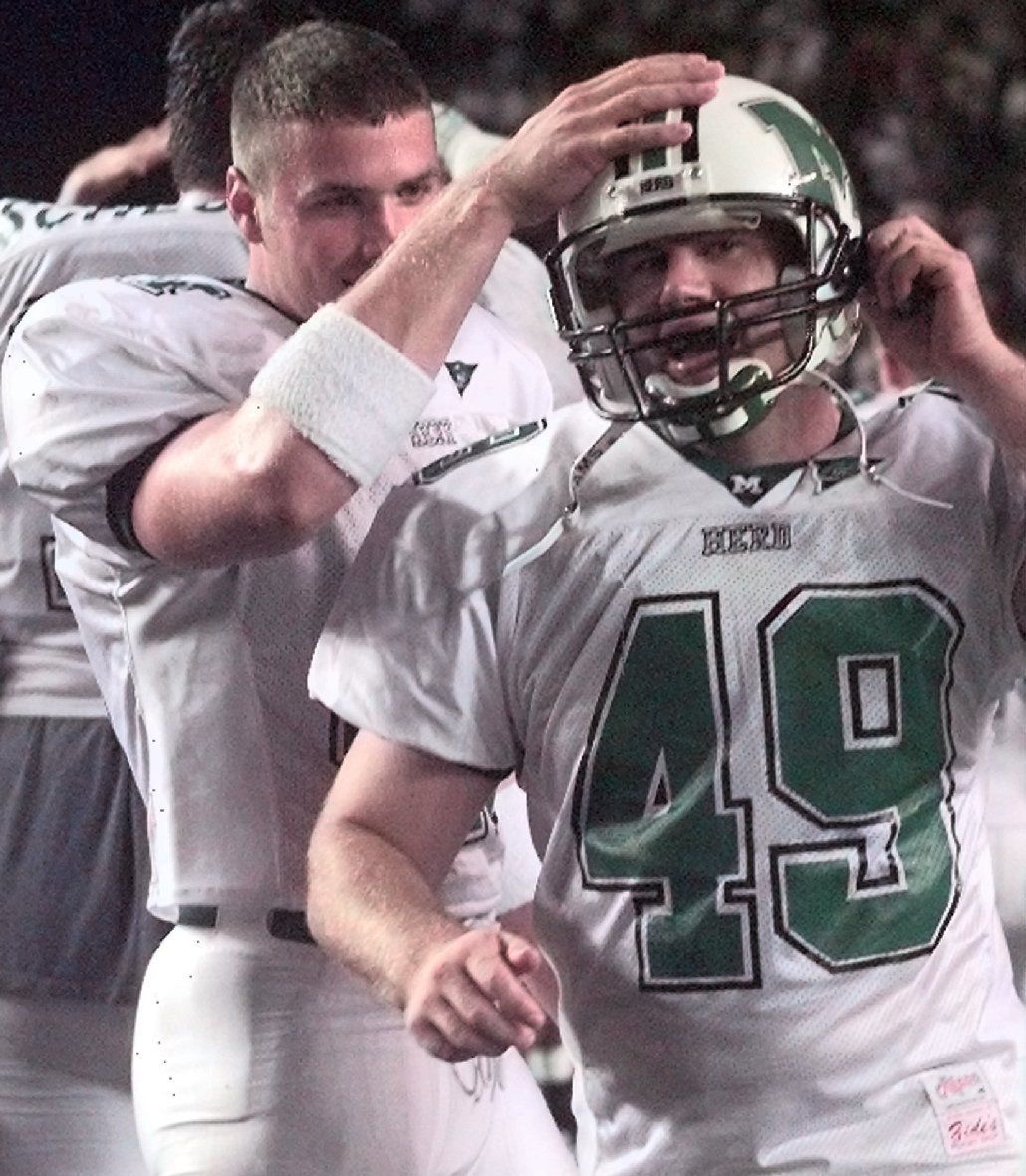 - -Marshall kicker Billy Malashevich (49) is congratulated by a teammate after successfully kicking the game-winning field goal against South Carolina. 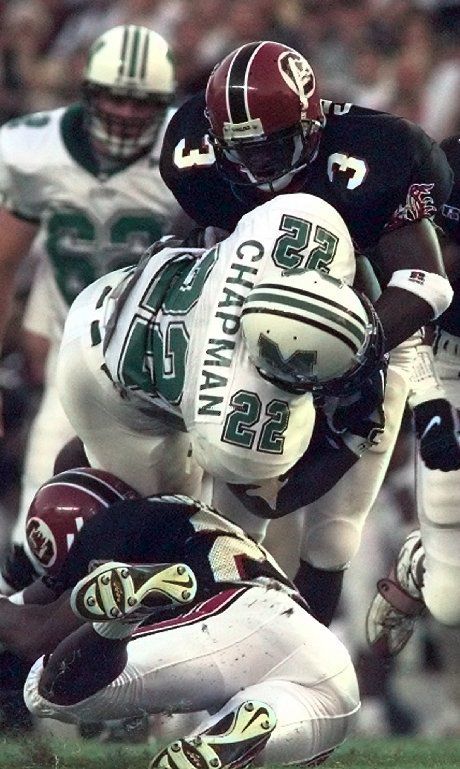 - -Marshall kicker Billy Malashevich (49) is congratulated by a teammate after successfully kicking the game-winning field goal against South Carolina.

EDITOR’S NOTE: When South Carolina scheduled Marshall for a Sept. 19, 1998 football game, the Thundering Herd was supposed to be a relatively easy victory for a Gamecocks team facing a tough Southeastern Conference schedule.

Marshall was anything but, however, pulling out a last-second victory at Williams-Brice Stadium, stunning a South Carolina squad that had lost just 17-3 to No. 15 Georgia a week earlier.

Here is the game story from that night:

Malashevich kicked a last-second, game-winning 37-yard field goal Saturday night to give the Thundering Herd a 24-21 victory over South Carolina and a healthy measure of national respect Marshall has craved.

“I’m glad they didn’t have any timeouts left to ice me,” said Malashevich, whose kick was reminiscent of Merrick’s last-second field goal to beat Youngstown State in the 1992 Division I-AA national championship game. “It was like a blur. I knew it was good when it came off my foot. The next thing I knew, I was knocked to the ground.”

Malashevich was knocked down by teammates who mobbed him during a wild celebration in front of the 78,717 fans, including about 9,000 Herd supporters, at Williams-Brice Stadium.

Those same Herd fans roared, “We are . . . Marshall,” hugged, sang and danced in the stands as they celebrated the Herd’s first major victory over a non-conference team during the 1990s. The win was the Herd’s first in 11 tries against a team from the Southeastern Conference, regarded by experts as the best football league in the nation.

Pruett was quick to say, however, that the game doesn’t count in the Mid-American Conference standings and that the Herd almost certainly has to win the league to receive a bowl berth.

“I don’t want to build it up or knock it down, but we have to go to Eastern Michigan and play a conference game next week,” Pruett said.

Malashevich’s field goal came three plays after sophomore cornerback Daninelle Derricott intercepted an Anthony Wright pass at the 50-yard line and returned it to the 20 with 1:04 left in the game.

“When Dani intercepted that pass, I turned to (offensive coordinator) Tony Petersen and said, ‘Let’s run two plays up the middle, kick a field goal and then get out of here,’ ‘’ Pruett said.

That’s exactly what happened. Tailback Doug Chapman, who gained a season-high 151 yards on 29 carries, lost three yards and then gained three yards. The Herd let the clock run from 18 seconds to 2 seconds, then sent in the field goal team.

“As soon as Dani intercepted that pass, I went right to the (kicker’s practice) net,” Malashevich said. “This is unbelievable.”

Maybe it’s so unbelievable because Marshall lost such games in the past, falling to North Carolina State three times, and Missouri, West Virginia and Mississippi once apiece in hard-fought games during the 1990s. The loss to Mississippi, also an SEC team, was 34-31 in last year’s Motor City Bowl.

“That loss left a bad taste in our mouths,” Chapman said. “People asked if we really were ready to be on this level. Are we going to fold, or not?”

On Saturday, the answer was “not.”

Marshall (3-0) led much of the game, taking a 21-10 lead in the fourth quarter, but the Gamecocks came back hard. South Carolina used a powerful and quick running game to drive 44 yards to the Marshall 8 before Wright hit Kerry Hood with a 9-yard touchdown pass. Wright then connected with Troy Hambrick for a 2-point conversion to pull South Carolina within 21-18.

After Marshall’s Jason Witczak, the Herd’s long-range kicker, missed a 47-yard field goal with 6:53 left, the Gamecocks charged again. South Carolina drove to the Marshall 19 before Courtney Leavitt kicked a 36-yard field goal to tie it, 21-21.

South Carolina (1-2) moved effectively during the drive, but misfired at the end. Wright threw three incompletions from the Marshall 19, including two on passes that were dropped.

“It’s very disappointing,” said South Carolina coach Brad Scott, whose job is said to be on the line. “You know the young men are trying, but at the same time you have to make the plays. We all have to do a better job, coaches included.”

Marshall trailed, 10-7, at halftime, but regained the lead with help from an interception by cornerback Maurice Hines, who returned the ball 10 yards to the South Carolina 23 on the first play of the third quarter.

Three plays later, Chad Pennington hit tight end Brad Hammon with a 15-yard touchdown off a perfectly executed play-action pass. Gamecocks defenders swarmed to stop the run on the third-and-2 play, and Hammon got behind the defense for the score to give the Herd a 14-10 lead.

Marshall scored again on its next possession, driving 70 yards in 11 plays, with Chapman sprinting seven yards through a huge hole around left end for the touchdown with 6:25 left in the third quarter to make it 21-10, drawing boos from many in the crowd.

In the trick play that Marshall calls the “Rooskie,” Pennington handed off to Chapman, who remained still in the backfield while Pennington executed an option fake. As the defense raced toward Pennington, Chapman sprinted around the left side for the touchdown.

After South Carolina tied the game, Marshall regained possession and, after a 3-yard gain by Chapman, Pennington was sacked for a 16-yard loss to the Herd 13. On the same play, Herd wide receiver LaVorn Colclough suffered an injury to his right arm and, after a stretcher was brought to the field, left under his own power. His status will be determined today.

One play later, Pennington, who completed 21 of 32 passes for 177 yards and two touchdown with no interceptions, hit a wide-open Nate Poole with a 30-yard pass to the 43, frustrating the Gamecocks and their fans who were emotionally charged just seconds earlier.

After a timeout, Marshall ran three plays and lost three yards, before punting with 1:25 left in the game.

South Carolina, with no timeouts, took over at its own 33 with 1:18 left after a 27-yard punt by Chris Hanson. On the next play Derricott intercepted a Wright, giving him his second huge interception of the season. He also set up a critical fourth-quarter touchdown in the season-opening 27-16 victory over Akron.

Marshall started quickly on its opening drive as Pennington completed all five of his passes on an eight-play, 76-yard march that resulted in a 13-yard touchdown pass to Lanier Washington to give the Herd a 7-0 lead.

Both teams moved the ball well in the first half, with South Carolina showing a surprisingly effective passing game against a porous Marshall secondary.

Wright completed 13 of 19 passes for 221 yards in the first half, but South Carolina misfired frequently in the red zone. South Carolina drove to the Marshall 19 on its first possession, but a sack by Andre O’Neal and Ron Puggi, combined with a delay of game penalty, moved the ball back to the 29 and the Gamecocks settled for a 46-yard field goal by Leavitt to pull within 7-3.

South Carolina blew another major scoring opportunity with 13:18 left in the second quarter. Hambrick took a pitchout and raced 28 yards to the Marshall 5, but John Grace stripped him of the ball and Puggi recovered. The Herd followed with a time-killing 11-play drive but produced no points.

South Carolina took the lead when Wright scored on a 1-yard sneak with 3:20 left before halftime, capping a 10-play, 90-yard drive that took 5:37.

The Gamecocks needed several key plays, including a 41-yard pass from Wright to Zola Davis on third-and-15 from their own 5.

Davis beat Hines over the middle, an area the Gamecocks exploited the entire first half before the Herd switched to a zone in the second half and better defended the pass.

Wright completed just 6 of 14 passes for 59 yards in the second half.

During the drive, South Carolina converted a fourth-and-1 play at the Marshall 45 after calling timeout to think about the call. Originally, Scott had sent the punt team on, but changed his mind during the timeout. Steve Mixon crashed four yards up the middle for a first down.

“We knew a fake and our defense was set for it,” Pruett said. “They just executed better than we did.”

One play later, Derricott was called for pass interference, moving the ball to the Herd 26. Three plays later, Wright scored.

After a Marshall punt, South Carolina made another charge, using 12 plays to drive from its own 22 to the Herd 13. Leavitt, however, hit the left upright on a 30-yard field goal attempt with 6 seconds left to end the threat.

When do you think the 2020 college football season will be played?