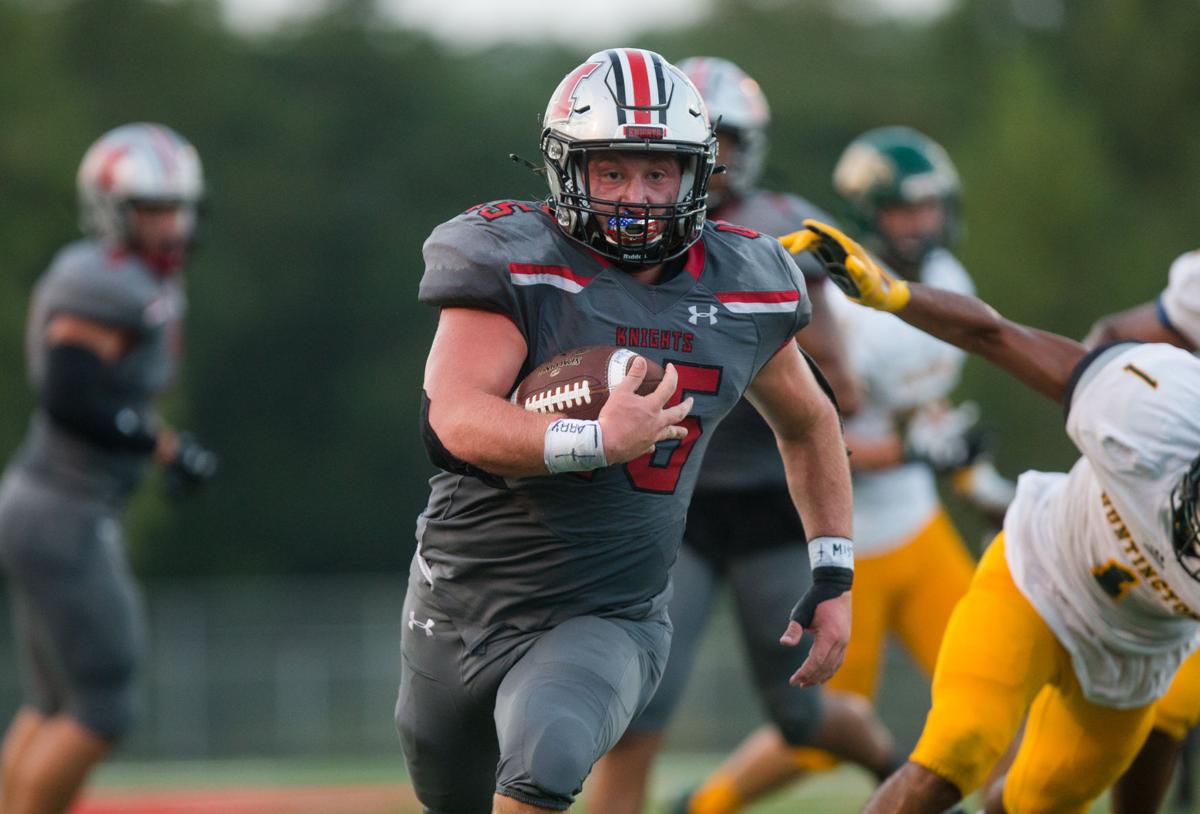 Cabell Midland running back Jakob Caudill (45) rushes for a touchdown as the Knights take on Huntington during a high school football game on Friday, Sept. 11, 2020, at Cabell Midland High School in Ona. 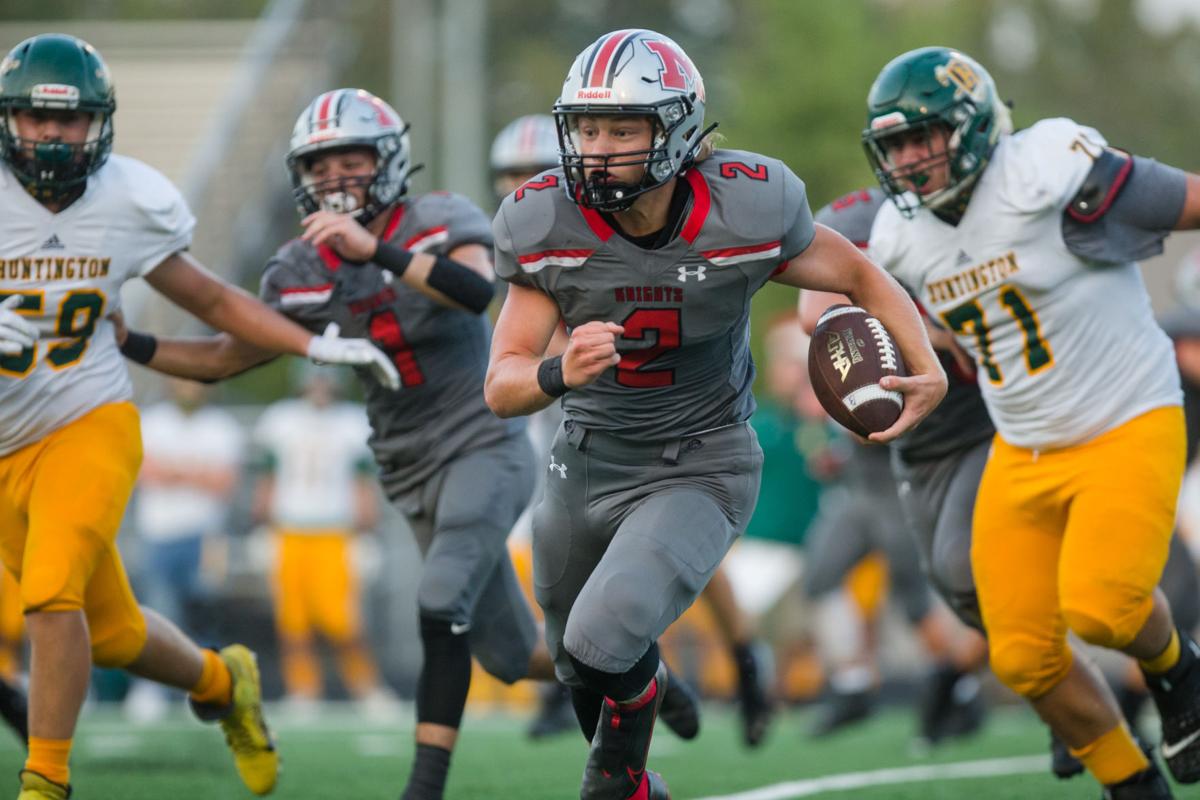 Cabell Midland's Baden Gillispie (2) rushes up the field on a carry as the Knights take on Huntington during a high school football game on Friday, Sept. 11, 2020, at Cabell Midland High School in Ona. 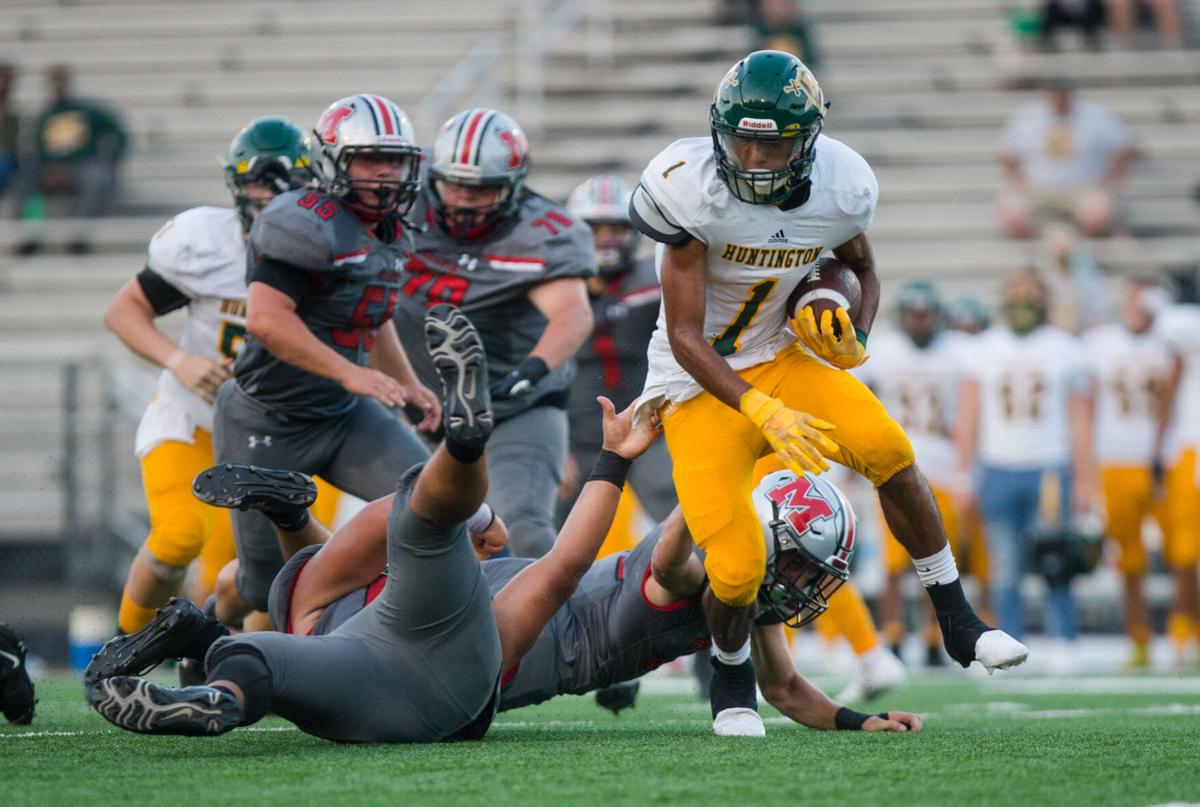 Huntington's Devin Jackson (1) spins out of an attempted tackle as the Highlanders take on Cabell Midland during a high school football game on Friday, Sept. 11, 2020, at Cabell Midland High School in Ona. 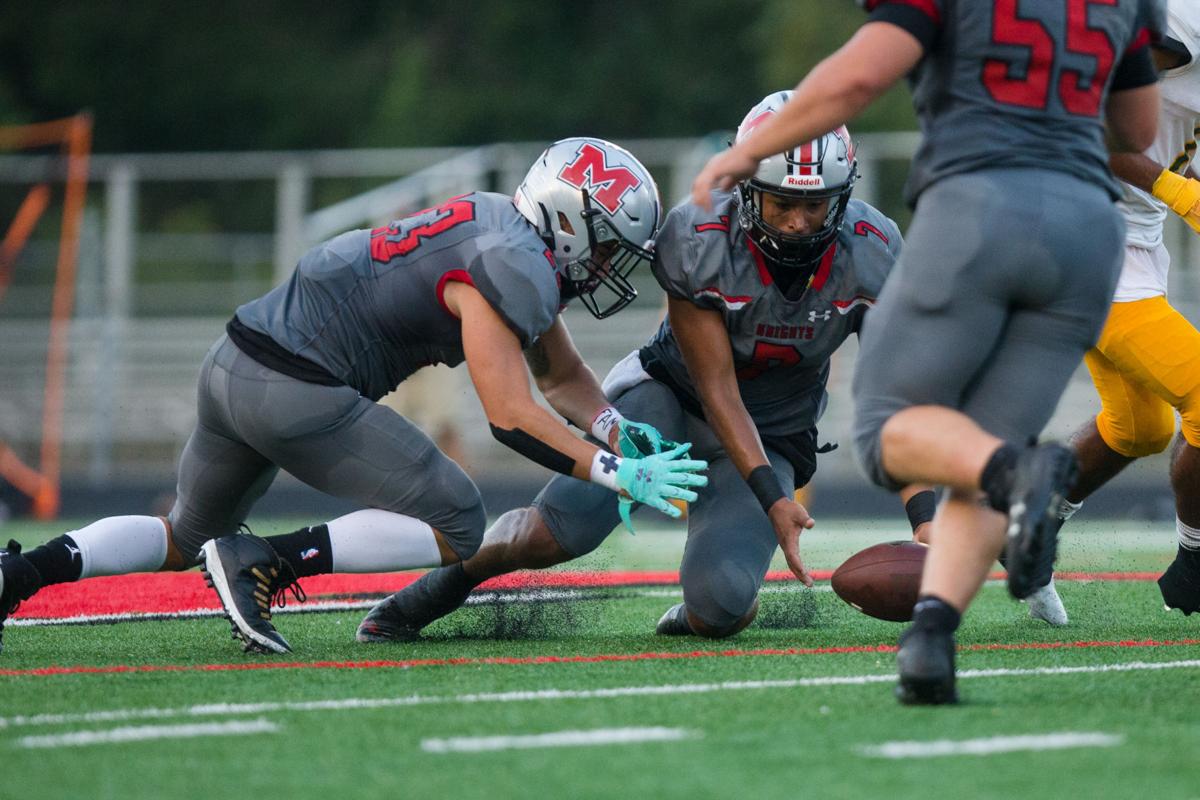 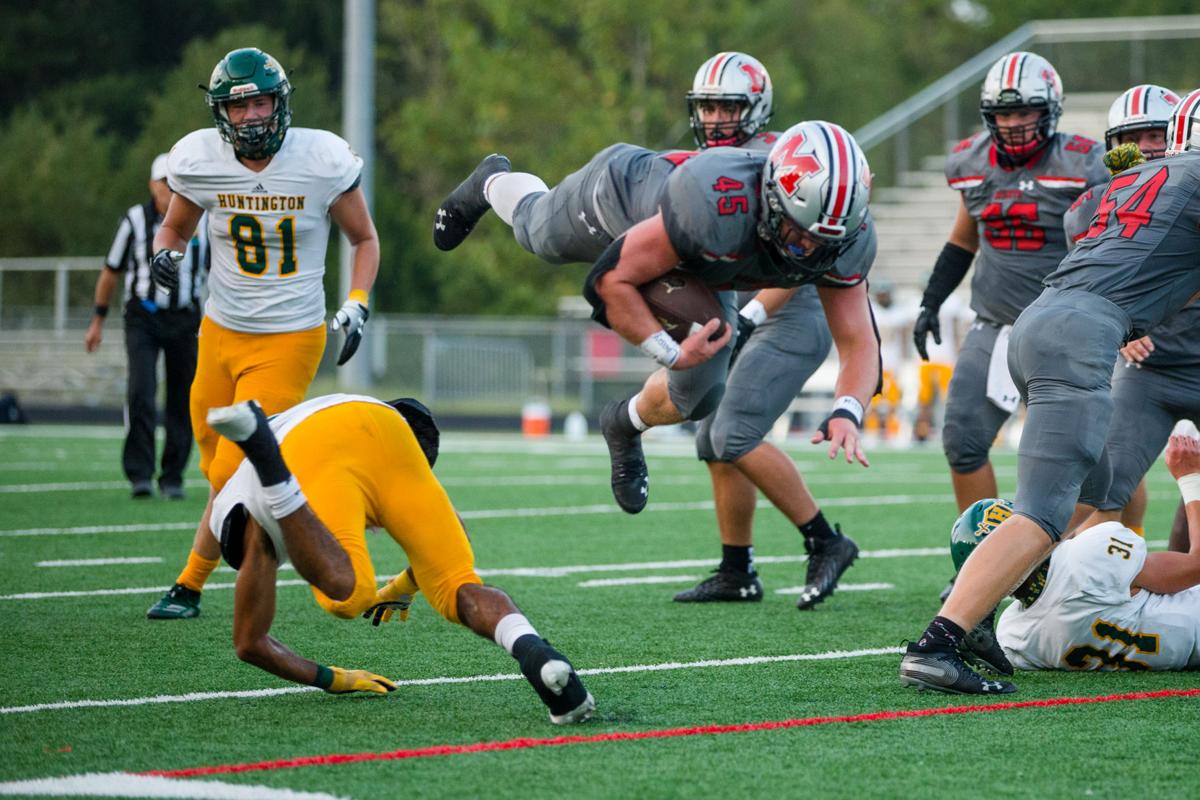 Cabell Midland running back Jakob Caudill (45) goes airborne as he is talked by a Huntington defender during a high school football game on Friday, Sept. 11, 2020, at Cabell Midland High School in Ona.

Cabell Midland running back Jakob Caudill (45) rushes for a touchdown as the Knights take on Huntington during a high school football game on Friday, Sept. 11, 2020, at Cabell Midland High School in Ona.

Cabell Midland's Baden Gillispie (2) rushes up the field on a carry as the Knights take on Huntington during a high school football game on Friday, Sept. 11, 2020, at Cabell Midland High School in Ona.

Huntington's Devin Jackson (1) spins out of an attempted tackle as the Highlanders take on Cabell Midland during a high school football game on Friday, Sept. 11, 2020, at Cabell Midland High School in Ona.

Cabell Midland running back Jakob Caudill (45) goes airborne as he is talked by a Huntington defender during a high school football game on Friday, Sept. 11, 2020, at Cabell Midland High School in Ona.

While that was again the case on Friday night in a 42-7 win over Huntington High, it was a defensive performance that caught the attention of Cabell Midland coach Luke Salmons.

“Our defense played a lot better, which I knew they could,” Salmons said. “They were a lot better team-wise.”

Cabell Midland’s defense limited Huntington to just nine offensive plays in the first half and just 84 yards of total offense in the game.

“I don’t think they had the ball in the first half, it didn’t seem like,” Salmons said. “We were able to churn out yards and they didn’t throw a lot in the first half — they ran the ball some — so the defense played well.”

While all went well for the Knights, there was one dark moment late in the game, which could be worrisome for the future.

Jakob Caudill, who rushed for 128 yards and two touchdowns on the evening, left the field without putting weight on his left leg after being tackled with under five minutes left.

Caudill, a senior running back who rushed for nearly 2,000 yards in 2019 and had more than 320 in two games this season, was able to walk off the field with a limp following the win.

After the game, Salmons said it’s a difficult scenario for a coach in a season in which no game is guaranteed — especially for a senior.

“You don’t know if they are going to play again,” Salmons said. “Caudill works really hard and you play him. He deserves to play, he wants to play. That’s how he is and that’s how all the kids are. It’s a different year. We don’t know what’s going to happen.”

Caudill’s condition was the only thing left in doubt at the end of this battle of Cabell County rivals.

Cabell Midland (2-0) dominated time of possession, having the football for 20 of 24 minutes in the first half en route to a 35-7 advantage at the break.

Going into Friday night, Cabell Midland knew the only way Huntington High could stay with them was to get its passing attack going — that coming after Huntington sophomore Gavin Lochow threw for 201 yards against Hurricane last week.

Lochow never got that chance, though, as the Knights grounded out several drives while keeping the Highlanders to only nine offensive plays in the first half.

“We only had nine snaps on offense in the first half,” Huntington High coach Billy Seals said. “You’re not going to beat anybody like that. Some of that was not getting anything done on offense, but a lot of that was the defense not getting off the field.”

The Knights rushed for 381 yards — 296 of which was before halftime — while Huntington was limited to just 84 yards of total offense.

Johnson’s 21-yard touchdown run started the scoring in the game as he capped a 10-play, 77-yard drive.

Huntington had a chance to gain some early momentum, forcing Cabell Midland into a fourth down deep in its own territory. However, an off sides penalty gave the Knights a first down and Cabell Midland never looked back.

For Seals, it was the second straight week that his team ran into self-inflicted wounds while struggling to get off the field in key situations.

Cabell Midland converted all four of its fourth down chances in the first half, which continued to whittle clock and keep the Highlander defense on the field.

“They converted four fourth downs in the first half,” Seals said. “That’s the difference in the game. Early on, they got a lead and with what they do on offense, they’re going to churn out first downs and play ball control.”

Three of those conversions came on Cabell Midland’s second scoring drive of the evening, which ended with Jackson Fetty taking a fourth-down pitch in from five yards out. Fetty later followed a 25-yard score by Caudill with a 17-yard score to make it 28-0 late in the second quarter.

Huntington’s lone shot at momentum came on the following kickoff when Devin Jackson provided the Highlanders’ only score with a 79-yard kickoff return for a touchdown with 1:10 left before the half.

Seals said the Highlanders had a prime opportunity to take a little momentum into the locker room, but again faltered.

Cabell Midland’s Isaiah Vaughn returned the ensuing kickoff to Huntington’s 40, which set up a 3-yard Caudill run to set the score at 35-7 at the break.

Huntington’s special teams faltered again to start the second half when the kickoff by Olivia Charles hit the shoulder of a Highlander and bounded into the arms of the Knights at the Huntington 40. Two plays later, Vaughn scored from two yards out to set the final tally.

Friday night was the 25th meeting between the schools in the Battle for the Shield. After the win, Cabell Midland leads the series 17-8.

Both teams are scheduled to play next week, but those games are up in the air due to the color-code system within West Virginia.

Cabell Midland is scheduled to play at Hurricane while Huntington is slated to host George Washington. The newest COVID-19 numbers are scheduled to be released on Saturday evening, which will indicate whether those games will be played.