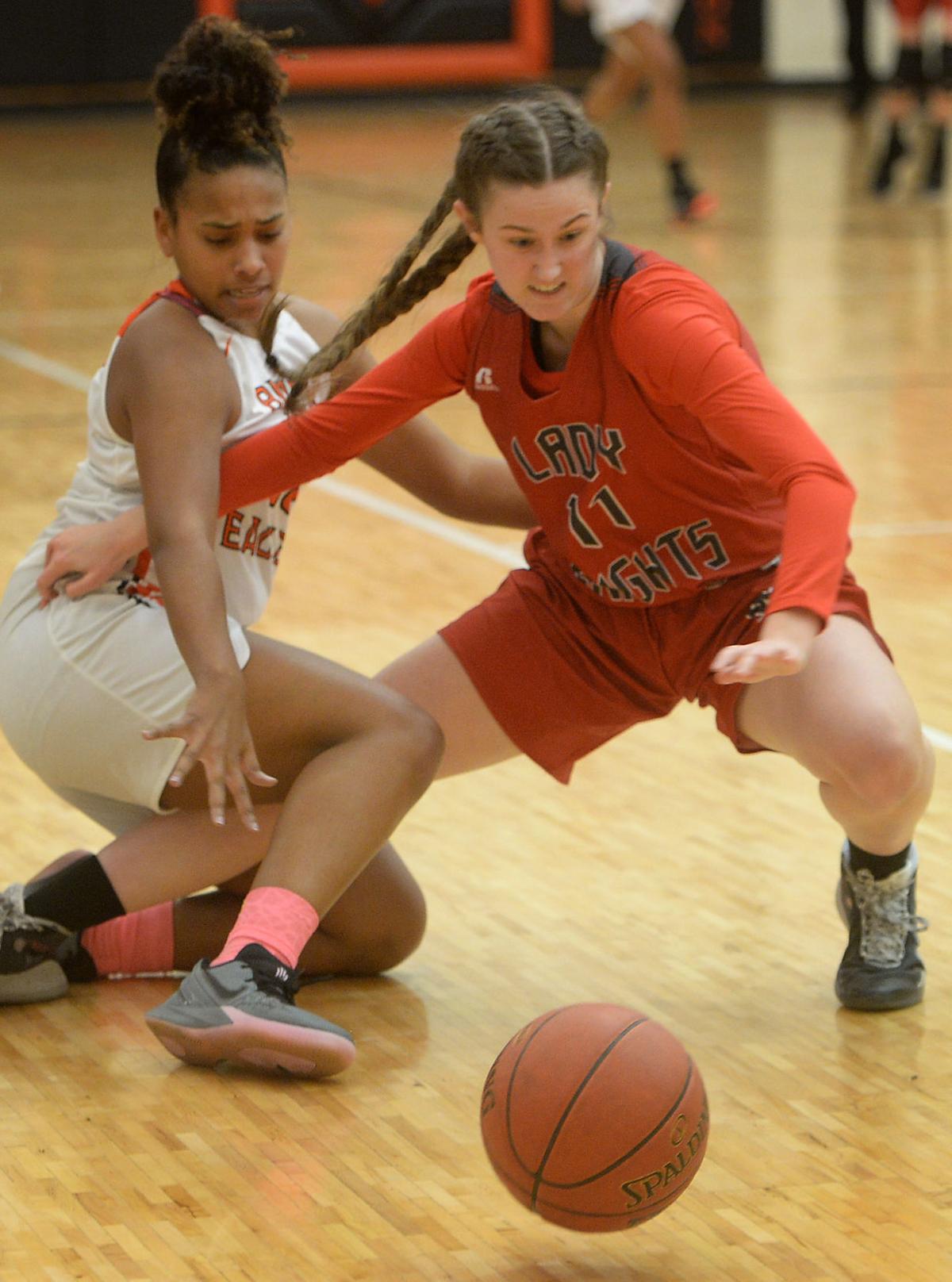 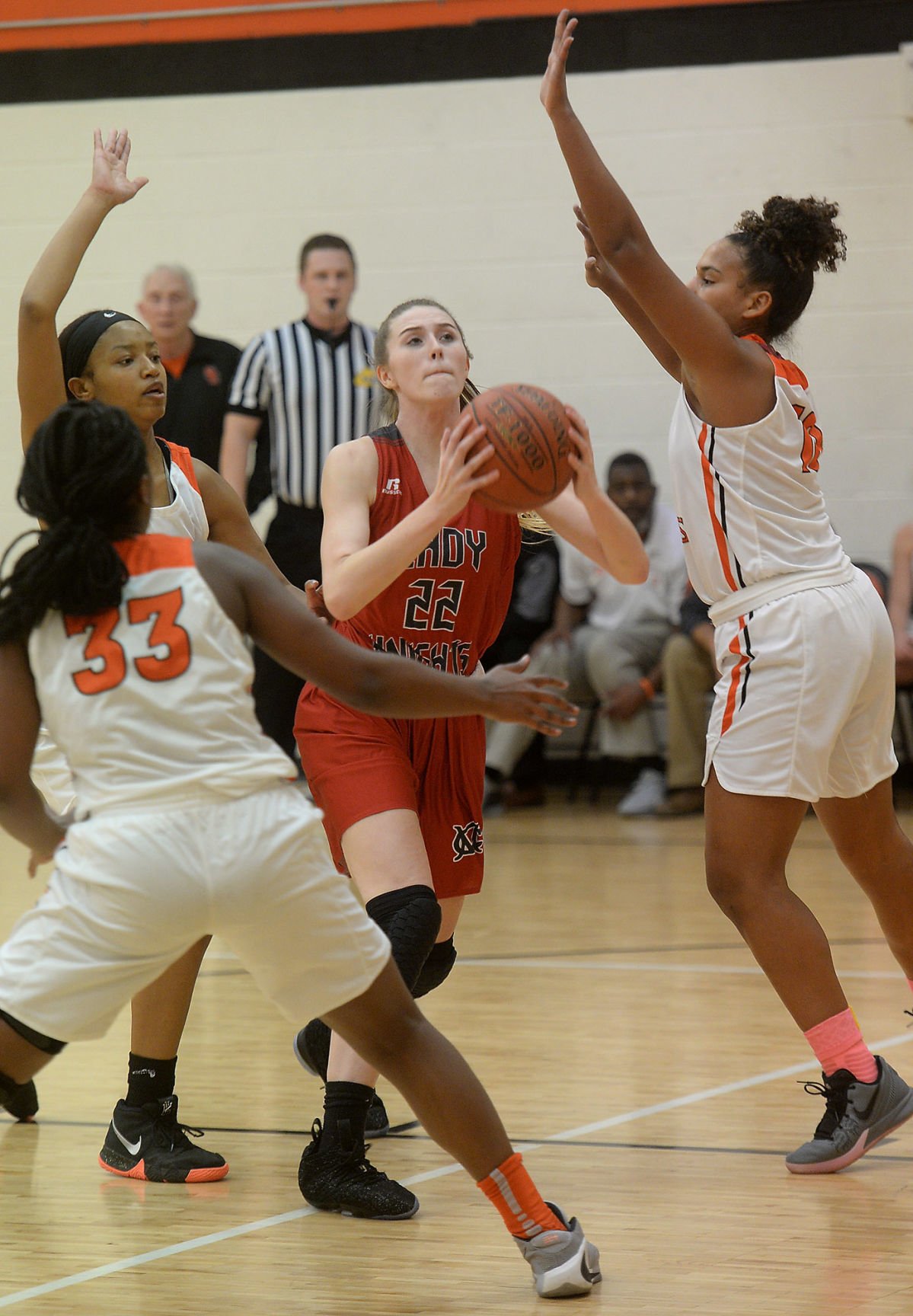 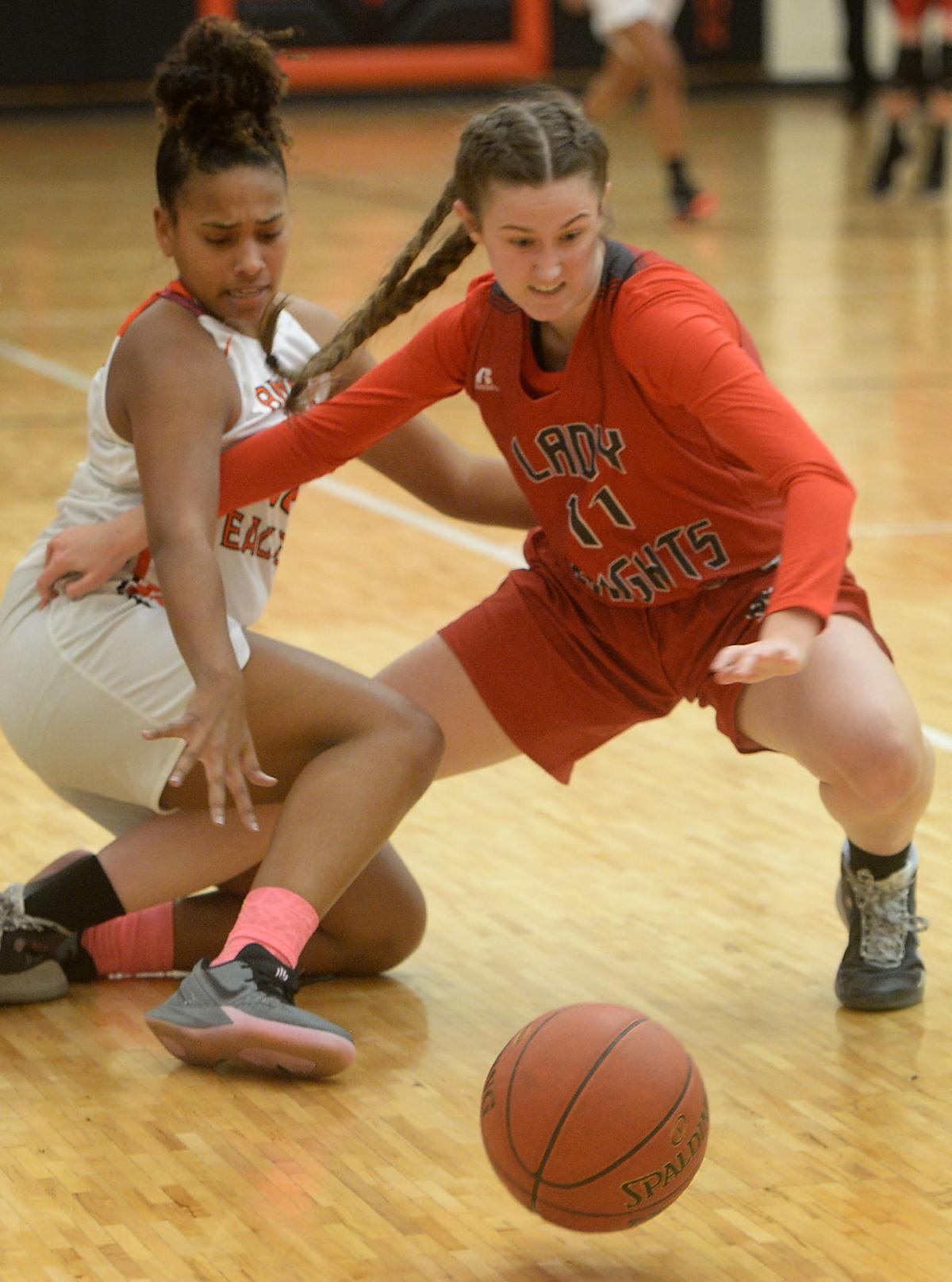 On paper, Cabell Midland’s roster consists of no seniors and six freshmen.

But backed into a corner on the road in a hostile environment on Tuesday, the Knights once again came up with pivotal plays down the stretch befitting a team far beyond its years.

Rylee Allie came up with a steal and a tying layup with 1:14 to go and she, K.K. Potter, Jazmyn Wheeler and Jayda Allie hit 6 of 8 free throws the rest of the way as the Class AAA No. 2 Knights rallied past host No. 5 South Charleston 49-45 in a Mountain State Athletic Conference showdown.

With the victory, Midland (11-0) remained undefeated and has been one of the state’s most pleasant surprises after rocketing from unranked to nearly the top of the AP poll with its early-season exploits.

On Tuesday, the Knights registered arguably their biggest win of the season despite making just five shots from inside the arc and shooting 28 percent from the floor.

“The good thing is, we’re young, but we’ve been there,” Midland coach Matt Adkins said. “We were there against (Boyd County, Kentucky) and against [Parkersburg] South. The girls fought in that game and came back — they just kept their heads.”

Both teams turned the screws defensively from the outset, with neither team leading by more than five points until a corner 3 from Potter early in the fourth quarter put Midland ahead 35-29.

From there, the long-dormant offenses got going a little bit and South Charleston (7-2) immediately responded with five straight points from Myra Cuffee.

A 3 by SC’s Maliha Witten with 3:12 remaining put South Charleston ahead 41-40, and after she took a charge on the other end, a technical was issued to the Midland bench. Witten drained both free throws, putting the Black Eagles up 43-40 with 2:39 to go.

Jayda Allie hit 1 of 2 from the line with 1:57 left, and with SC trying to pass the ball around the perimeter to run clock, Rylee Allie intercepted a pass from Cuffee and sprinted to the other end for a layup to tie things up.

After a South Charleston timeout, Midland turned SC over by forcing Witten out of bounds on the sideline, leading to a foul shot from Wheeler that gave the Knights the lead back.

Those two crucial turnovers were part of 18 for the game by the Black Eagles.

“We made some mistakes at the end, but a lot of credit goes to Cabell, they’re a good team,” SC coach Gary Greene said.

Cuffee came up with a bucket with 30 seconds left to give SC the lead back, but Potter got free inside and scored with 11 seconds to go to give Midland a 46-45 advantage. Cuffee was tied up on the inbounds pass, resulting in a jump ball and possession to the Knights.

Cuffee was also hit with a technical on the play, giving Midland a pair of foul shots and possession with just 4.4 seconds remaining.

Rylee Allie hit 1 of 2 and Jayda Allie closed the door with a pair of free throws to end things.

“It’s tough every night,” Adkins said of life in the MSAC. “To get this one is a big win.”

Despite making just 12 field goals, Midland hit 18 of 29 foul shots and seven 3-pointers to get by. Autumn Lewis led the charge with 15 points and 10 rebounds and Rylee Allie finished with 11 points.

Cuffee scored a game-high 20 points with Witten chipping in 13 for SC, but the rest of the Black Eagles combined for just 12 points on 4-of-28 shooting in the team’s second game without point guard Kiki Terrell, who is out for the year with a torn ACL.

That injury moved Witten to point guard and forced Greene to go deeper into his bench. While it wasn’t pretty offensively on Tuesday, Greene was encouraged by a suffocating defensive effort that nearly saw the Black Eagles through.

“We’ve got some great kids on the court and off the court and for them to show that kind of intensity on defense, this is one of the more prouder moments of the year for us,” Greene said. “Those kids really laid it on the line. One thing about them, each day they’re going to lay it on the line and we’ll let the scoreboard take care of itself. They’re giving us everything they’ve got and that’s all we can ask from them.”