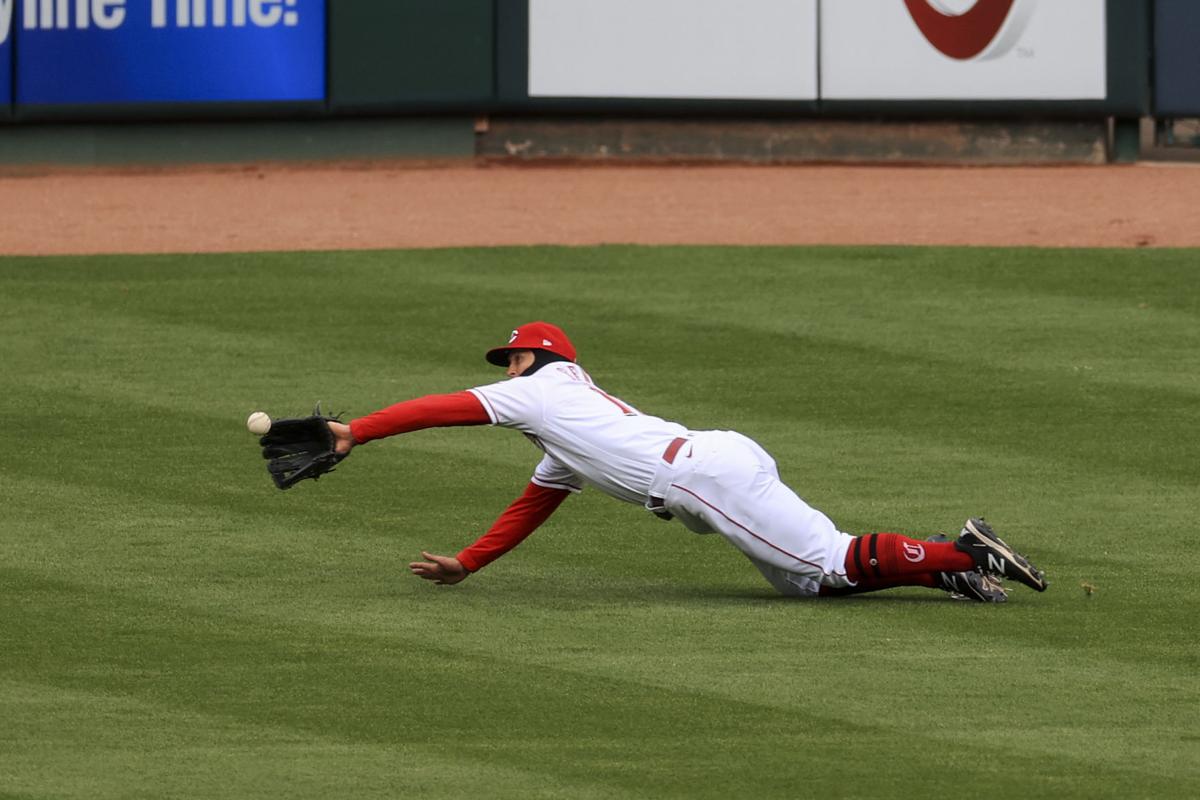 Cincinnati Reds' Nick Senzel dives to make a catch for an out on a ball hit by St. Louis Cardinals' Nolan Arenado during the fourth inning of the baseball game in Cincinnati, Thursday, April 1, 2021. (AP Photo/Aaron Doster) 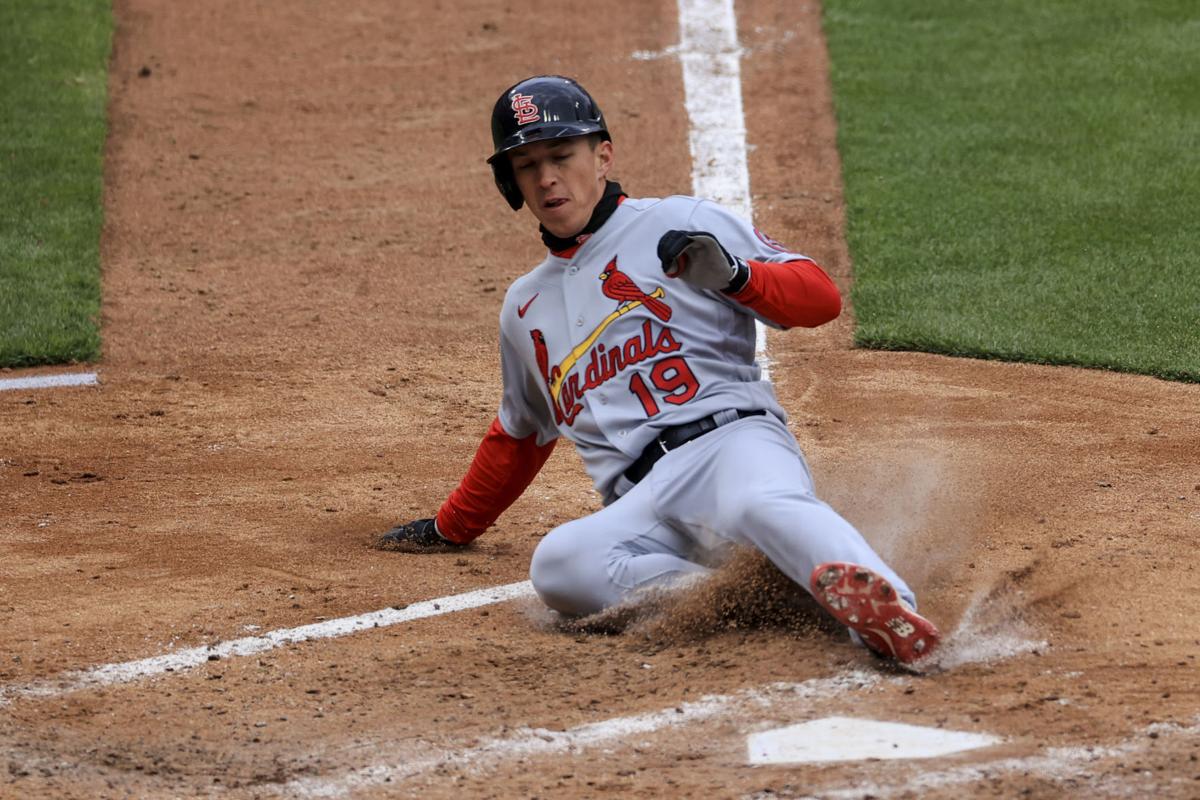 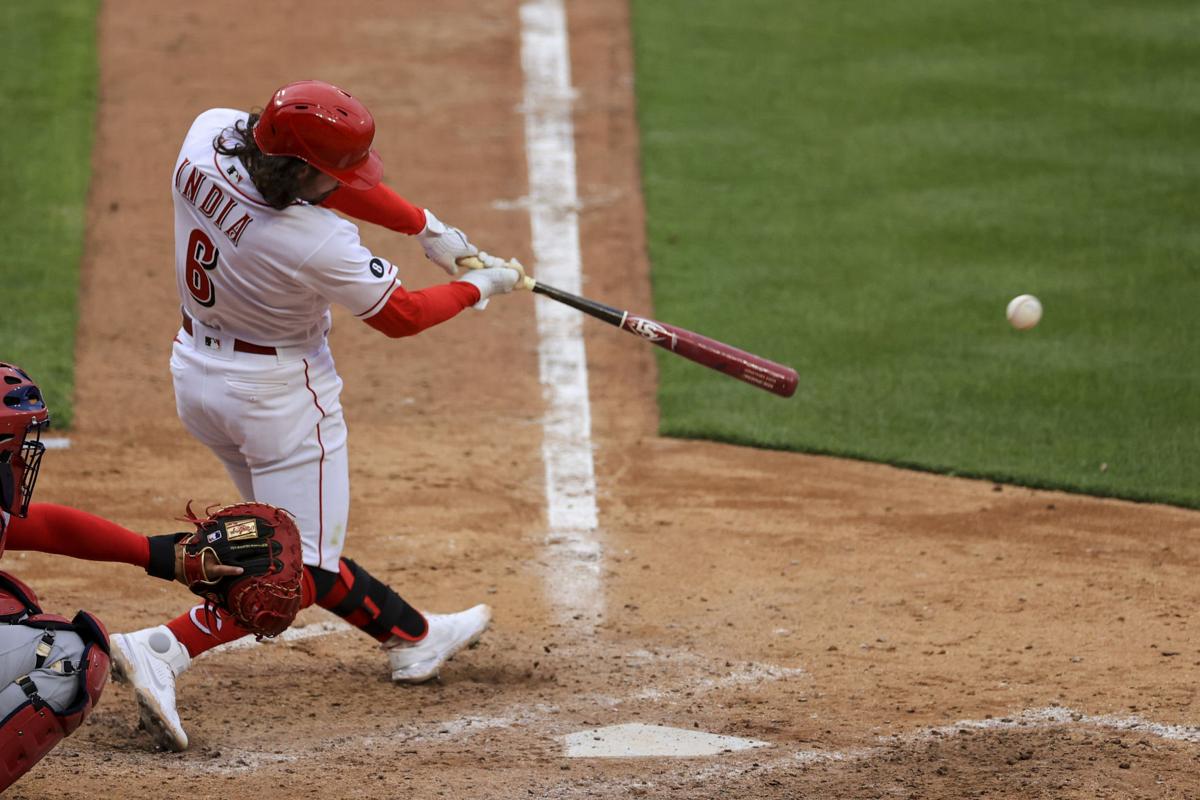 Cincinnati Reds' Nick Senzel dives to make a catch for an out on a ball hit by St. Louis Cardinals' Nolan Arenado during the fourth inning of the baseball game in Cincinnati, Thursday, April 1, 2021. (AP Photo/Aaron Doster)

CINCINNATI — On an Opening Day when the weather was representative of the north, the Cincinnati Reds hopes for victory went south in a hurry.

The St. Louis Cardinals scored six runs in Luis Castillo’s first 13 pitches on their way to an 11-6 victory in front of about 7,000 spectators in the 37-degree cold Thursday afternoon at Great American Ballpark.

Castillo’s futility — he struck out no one for the first time in 69 starts — provided just some of the oddities of a game during which snow peppered the park. Joey Votto, who has popped out fewer than 15 times in 13 seasons, did so twice in one game for the first time since 2008. Cardinals pitcher Jack Flaherty walked twice, but didn’t last long enough to qualify for the win, despite being staked to an 11-4 lead.

St. Louis first baseman Paul Goldschmidt, who went 4 for 5, appeared to hit a home run in the first inning, only to be awarded a double after a 2-minute, 7-second review. The Reds used three players in centerfield, as Tyler Naquin replaced Nick Senzel, who left with a shoulder injury, in the fifth. Aristides Aquino, who played all of four innings in center last season, replaced Naquin there in the sixth.

Two runs, one for each team, scored on wild pitches. In the sixth, Nick Castellanos hit into a rare 7-4 double play when Tyler Stephenson lost track of the outs and was thrown out, costing the Reds at least one run, as Jonathan India would have scored on Castellanos’ sacrifice fly. The teams combined to use 11 pitchers. Castellanos took two bases in the ninth inning, but neither counted as a stolen base because both were ruled indifference after the Cardinals made no attempt to throw him out or even hold him on.

The first inning was Cincinnati’s undoing. After Tommy Edman led off with a groundout, Goldschmidt smacked his homer-turned-double. Nolan Arenado singled and Paul DeJong’s hit scored Goldschmidt. After Castillo hit Tyler O’Neill, Yadier Molina reached on an error by shortstop Eugenio Suarez, scoring Arenado and DeJong. Dylan Carlson followed with a three-run homer off the foul pole in right.

The Reds made it 6-1 in the bottom of the first when Jesse Winker doubled, moved to third on a flyball and scored on Flaherty’s wild pitch. St. Louis, though, made it 7-1 when Goldschmidt reached second on a combination single/Suarez throwing error, then came around on a base hit by Arenado.

“That was big to get that first run across,” Goldschmidt said. “That was huge for us. We had really good at bats, even after that first inning. You never want to let off the gas. It’s hard, but their guys are good and we needed to keep going.”

Castellanos gave Cincinnati fans hope with a two-run homer to left in the third, making it 7-3, but Castillo walked Flaherty leading off the fourth and gave up an infield hit to Edman and an RBI single to Goldschmidt. Castillo then threw a wild pitch that allowed Edman to cross the plate to make the deficit 9-3.

Tyler O’Neill smashed a two-run homer off reliever Cam Bedrosian in the the fourth to boost the Cardinals’ lead to 11-3. Suarez homered in the bottom of the inning to make it 11-4 before the Reds added two runs in the fifth on RBIs by Votto and Mike Moustakas.

Cincinnati loaded the bases with one out in the sixth, but failed to score as Castellanos hit into the 7-4 double play.

Reds manager David Bell said Senzel’s injury appears to be minor and hopes to have him back for Saturday’s game.

“We won’t have full knowledge of what to expect until tomorrow,” Bell said. Arenado went 2 for 5 in his debut with the Cardinals after coming over in an offseason trade with Colorado. Giovanni Gallegos was the winning pitcher.

Castellanos went 3 for 5 for Cincinnati. Winker was 2 for 4.

REMEMBRANCES: The Reds honored several former members of the team who died in the last year, as well as several Major League stars such as Henry Aaron and Lou Brock.

The longest tribute was for Reds Hall of Fame second baseman Joe Morgan, whose No. 8 is being worn on a patch on the team’s uniform sleeves. Also remembered were Tom Seaver, John McNamara, Mike Bell, Grant Jackson, Denis Menke and Ed Armbrister, among others.

NOTES: India smacked is first major league hit, a double in the fourth inning, and went 2 for 4. He is the first Reds rookie position player to start on Opening Day since third baseman Chris Sabo in 1988. The Reds designated pitcher Edgar Garcia for assignment to make room for India on the 40-man roster.

Castillo’s Opening Day start was the 16th for the Reds by a pitcher from the Dominican Republic. That’s the most by any club in MLB history.

Votto started his 13th consecutive Opening Day, tying Dave Concepcion for third most in Reds history. Pete Rose started 16 and Bid McPhee 14. The 11 runs allowed were the most by the Reds on Opening Day since 2010 when they also lost to St. Louis. Carlson’s homer was the first by a Cardinals rookie since 1936.

Opening day — April 1, 2021 — marked the return of fans to ballparks across the country after they were shut out last season because of the co…