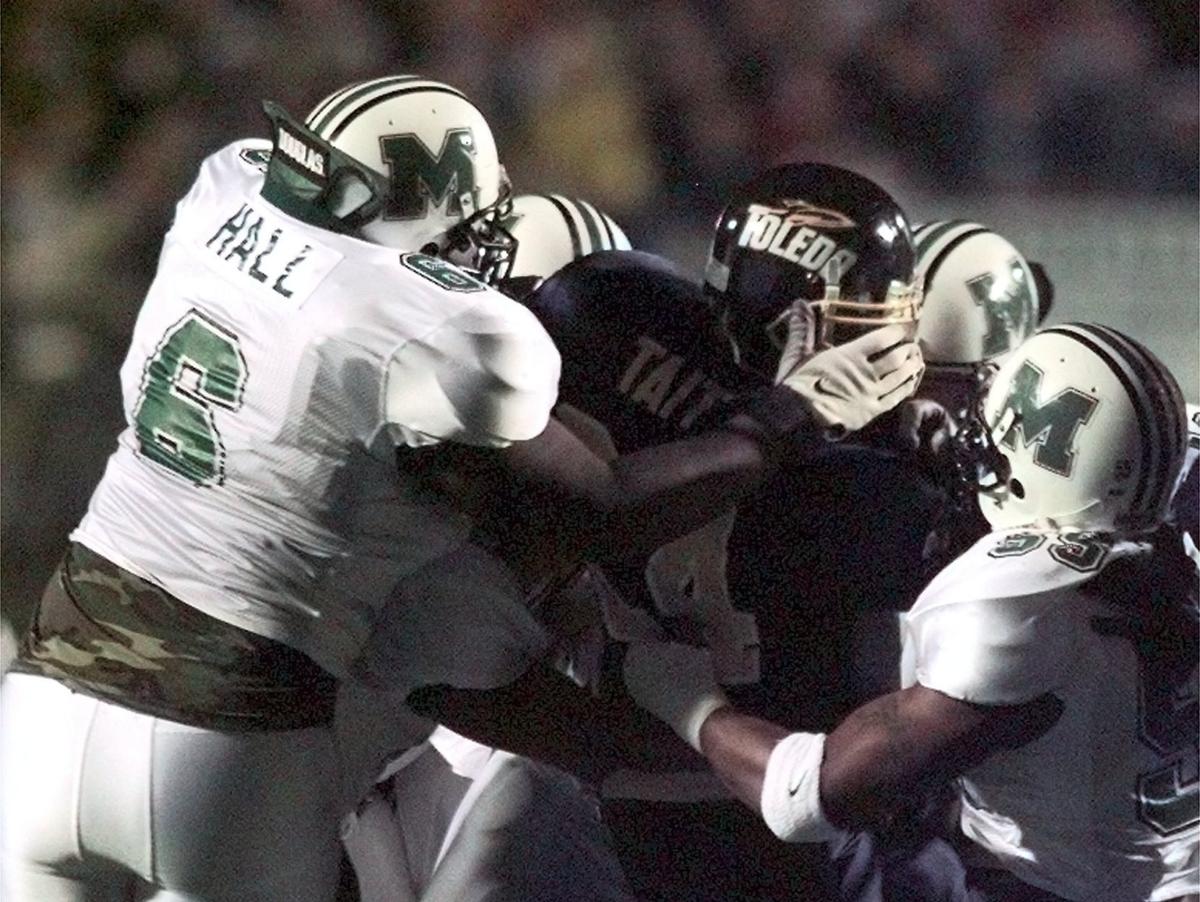 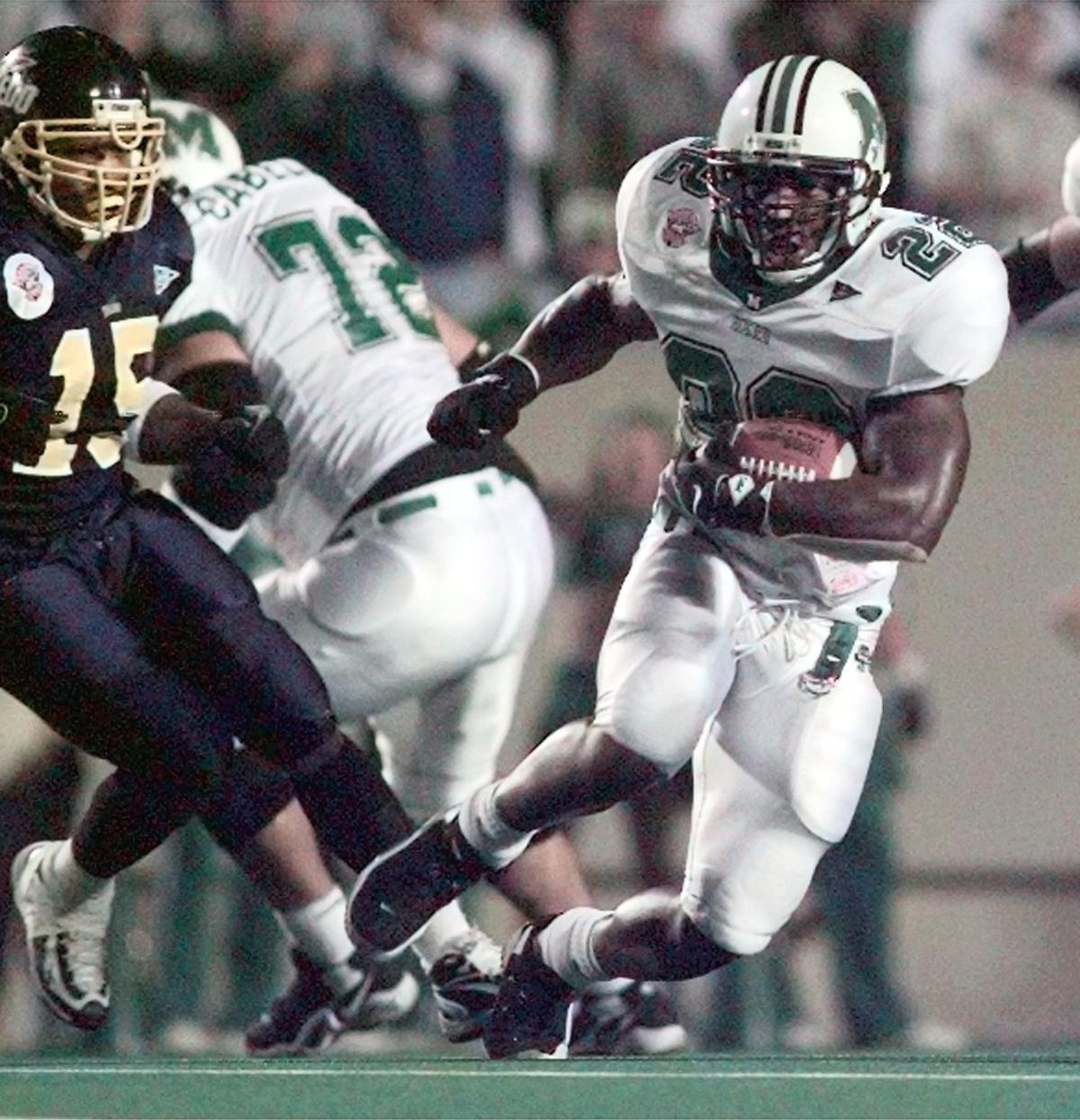 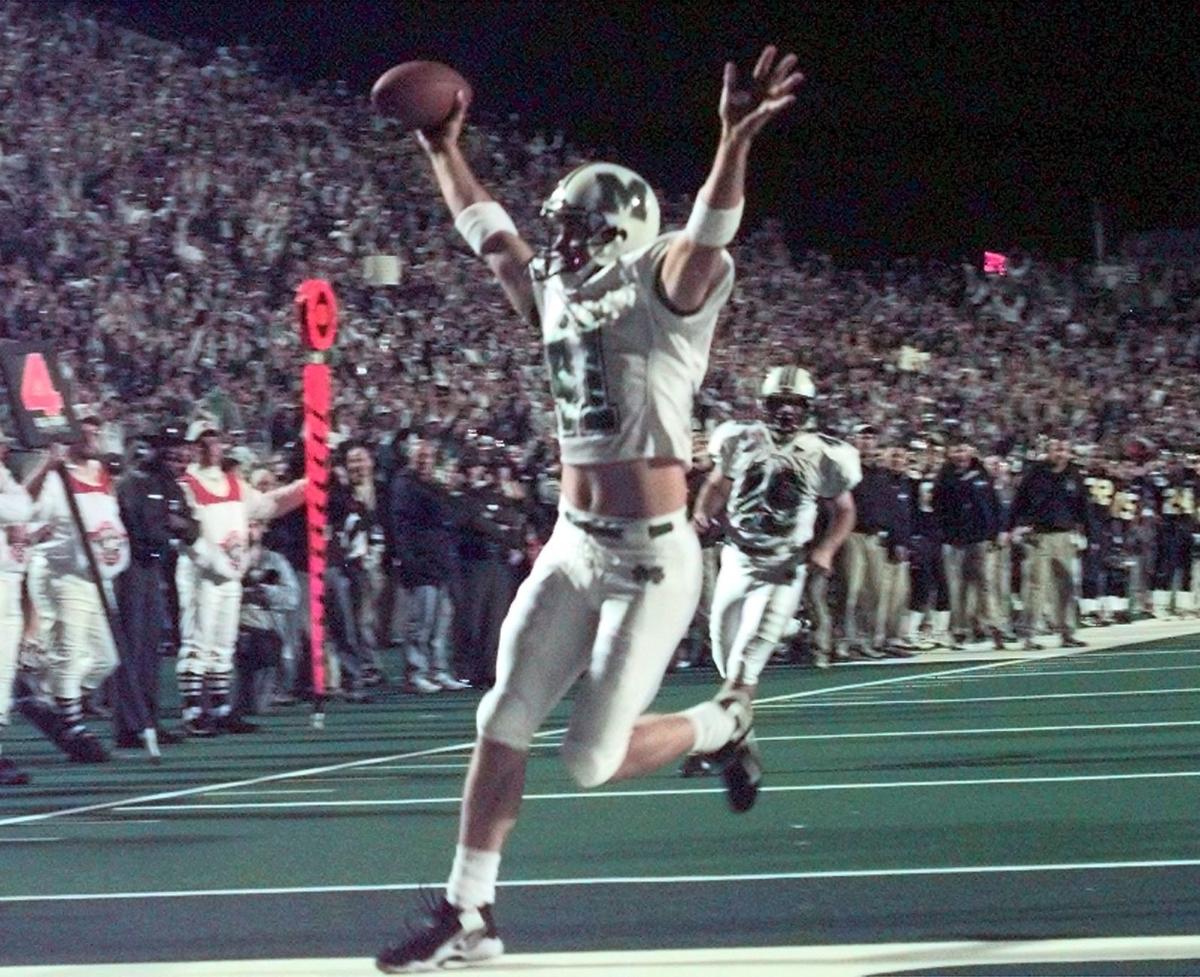 Marshall's Chris Hanson sneaks in for the touchdown on a field goal fake against Toledo in the MAC Championship game on Dec. 4, 1998, at Marshall Stadium. 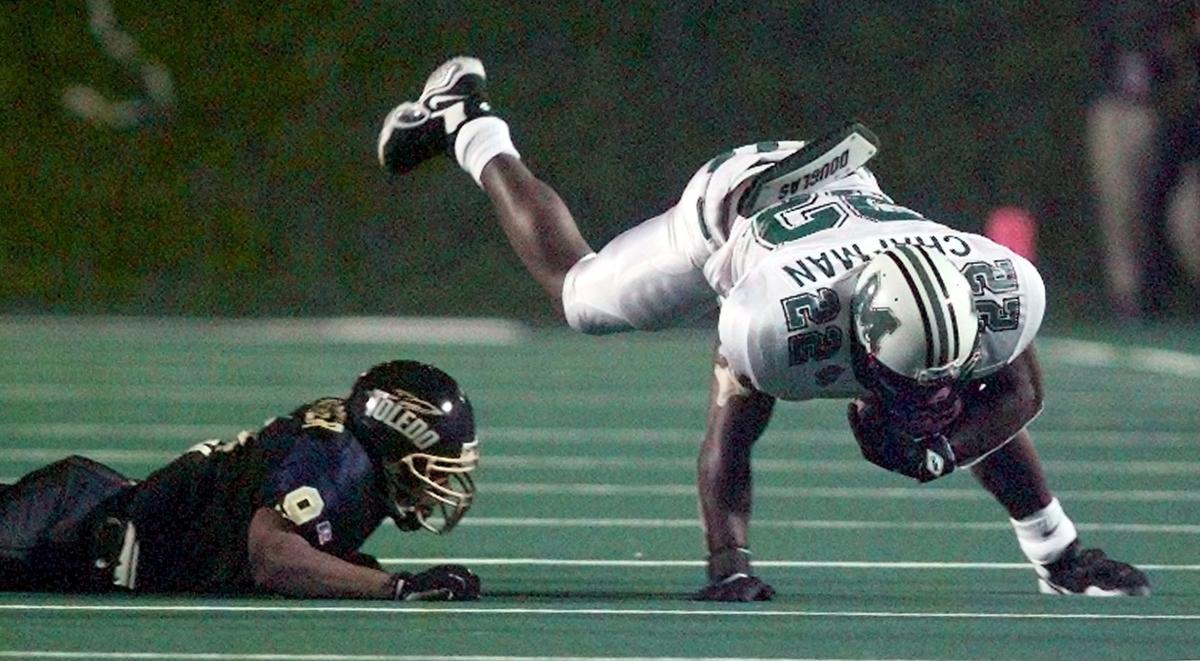 Marshall running back Doug Chapman scrambles for yardage past Toledo's Jameel Turner in the MAC Championship game on Dec. 4, 1998, at Marshall Stadium. 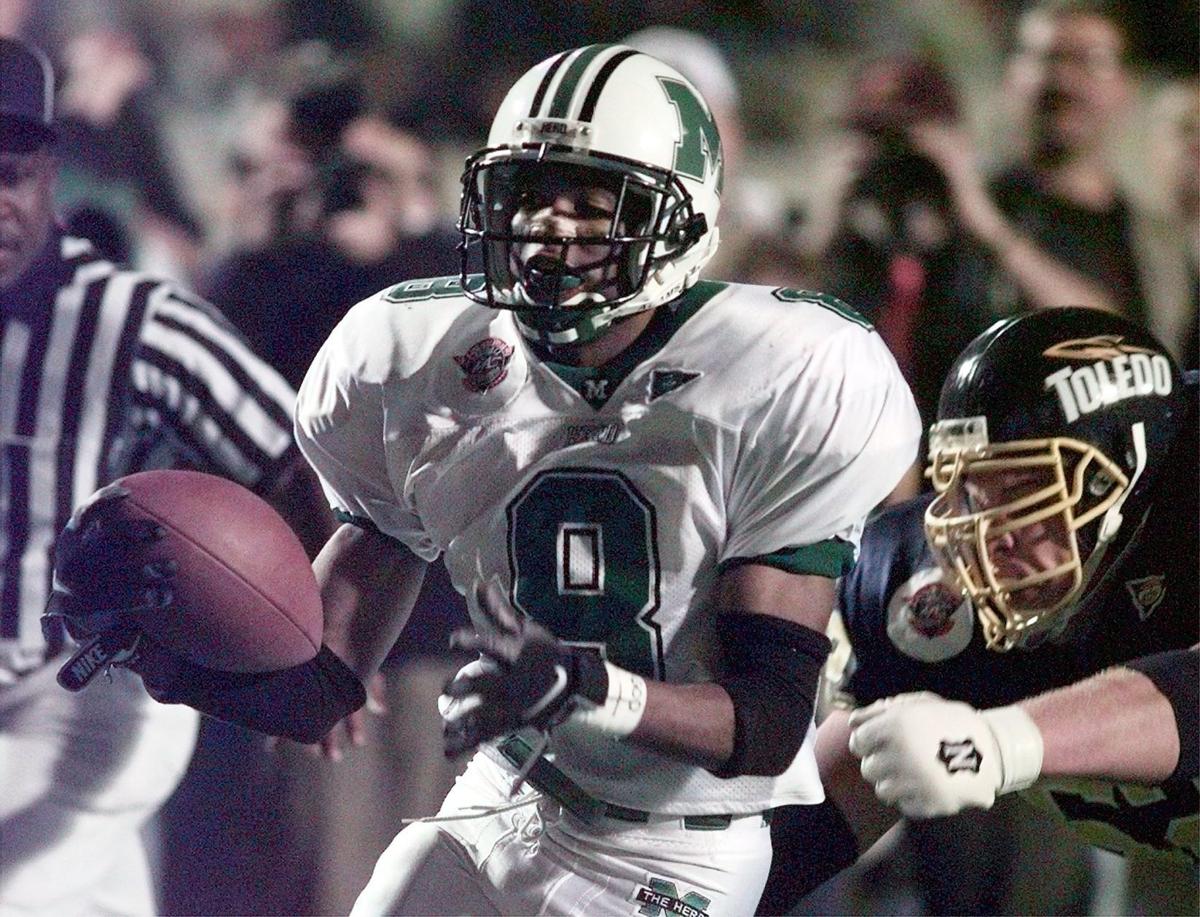 Marshall defensive back Daninelle Derricott eludes Toledo offensive lineman Michael Schaefer as he returns a fumble for a touchdown in the fourth quarter in the MAC Championship game on Dec. 4, 1998, at Marshall Stadium. 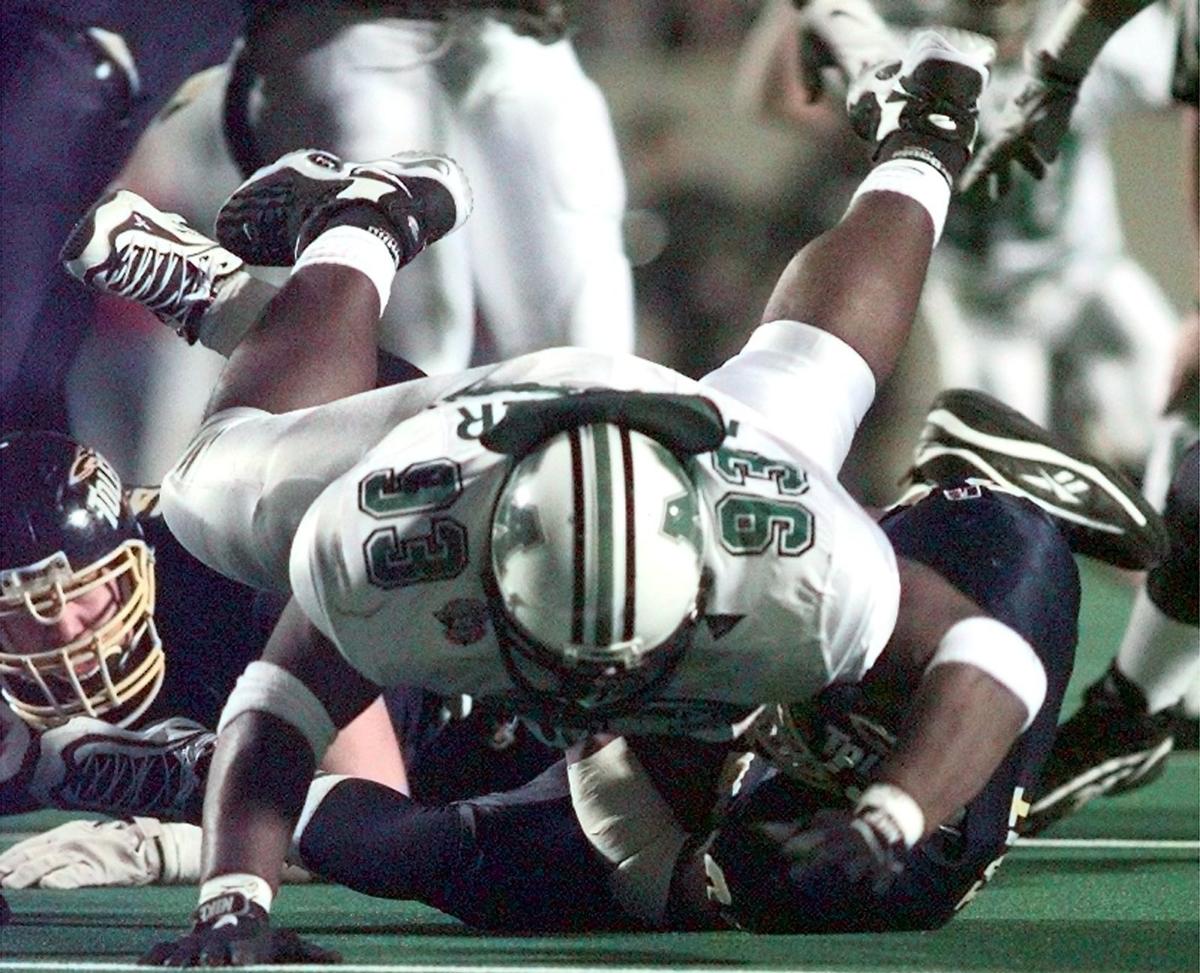 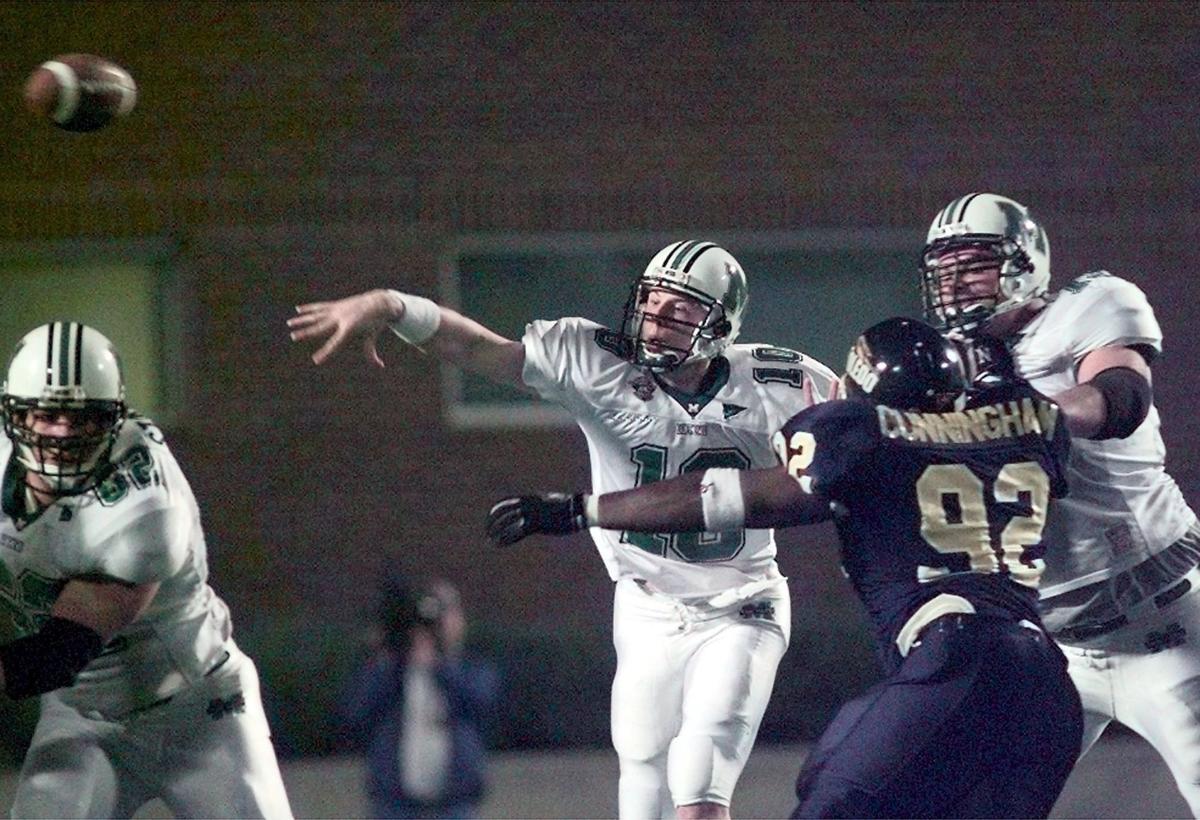 Chad Penning throws against Toledo in the MAC Championship game on Dec. 4, 1998, at Marshall Stadium. 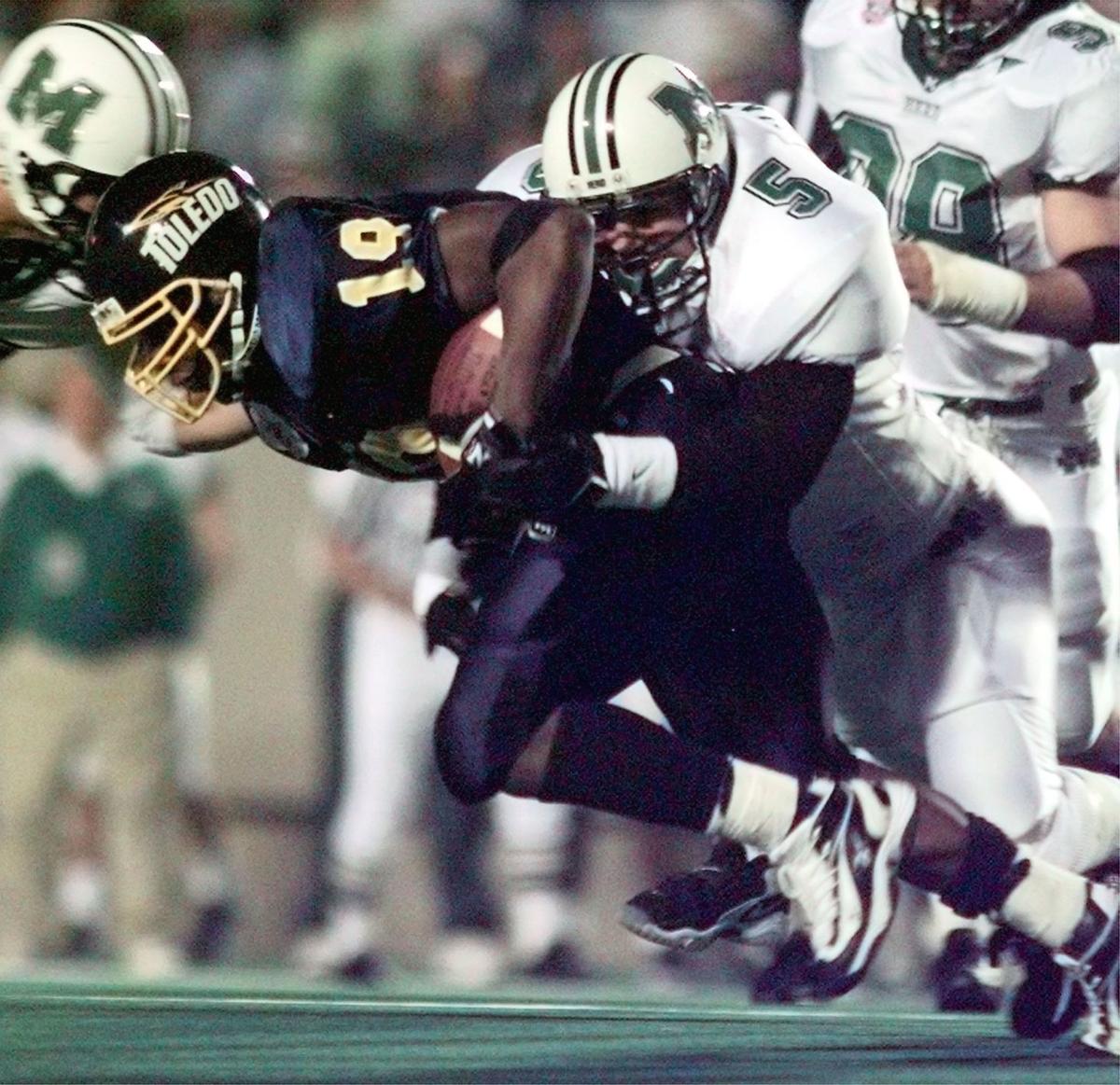 Marshall's Chris Hanson sneaks in for the touchdown on a field goal fake against Toledo in the MAC Championship game on Dec. 4, 1998, at Marshall Stadium.

Marshall running back Doug Chapman scrambles for yardage past Toledo's Jameel Turner in the MAC Championship game on Dec. 4, 1998, at Marshall Stadium.

Marshall defensive back Daninelle Derricott eludes Toledo offensive lineman Michael Schaefer as he returns a fumble for a touchdown in the fourth quarter in the MAC Championship game on Dec. 4, 1998, at Marshall Stadium.

Chad Penning throws against Toledo in the MAC Championship game on Dec. 4, 1998, at Marshall Stadium.

Marshall’s defense, though, came up big against a star-studded Toledo offense, and Pennington returned to rally the Herd to a 23-17 victory in the league title game.

HUNTINGTON — Now, maybe the rest of the Mid-American Conference teams are convinced that Marshall is a champion in its truest form.

Marshall celebrated — in its own locker room — its second consecutive Mid-American Conference championship Friday night after beating Toledo 23-17 behind a heroic effort from a limping star quarterback and a terrorizing, big-play defense.

The gutsy performance earned the Thundering Herd (11-1) a berth in the Motor City Bowl Dec. 23 in the Pontiac (Mich.) Silverdome against Louisville (7-4).

Herd quarterback Chad Pennington completed 23 of 38 passes for 249 yards and one touchdown, with no interceptions, despite suffering a deep groin pull that left him in severe pain and limited his mobility. Pennington, though, looked to the Marshall defense for inspiration.

“If our defense could do what it was doing, surely I could get back out there,” Pennington said.

Marshall proved that its dominance of the MAC last season, when the Herd beat Toledo 34-14 in the league title game, wasn’t a fluke and that it could win the conference without All-American wide receiver Randy Moss.

The Herd didn’t win the game, televised nationally by ESPN2, without a fight. Trailing 10-6 and facing second-and-10 from the Marshall 39, Pennington hit wide receiver Jerrald Long with a short pass. Long eluded two defenders and raced 50 yards to the Rockets’ 19. One play later, Pennington threw a perfect touchdown pass to Lanier Washington, who beat cornerback Kelly Herndon to score. Billy Malashevich’s extra point gave Marshall a 13-10 lead with 13:55 left in the game.

The touchdown transformed Marshall and energized the crowd of 28,085. Marshall’s defense stopped Toledo (7-5) in three plays. Then, after a Marshall punt, cornerback Daninelle Derricott made the play of the game. Derricott scooped up a Brock Kreitzburg fumble and returned it 20 yards for a touchdown to make it 20-10.

Derricott showed up for the postgame press conference carrying a box of cereal.

“We got him out of a box of Lucky Charms,” Marshall coach Bobby Pruett said, drawing laughter.

Marshall’s big plays didn’t end with Derricott. Defensive end Carlos Smith made a spectacularly athletic play, batting a pass into the air and then diving to intercept it at the Toledo 28 with 10:08 left in the game.

Marshall then pounded away with its running game, as tailback Doug Chapman, who gained a game-high 106 yards on 23 carries.

Toledo’s last effort fell short, as the Rockets drove to the Marshall 1 before Wallace threw a touchdown pass to tight end Mike Bilick.

Toledo’s ensuing onside kick was recovered by Marshall’s Damone Williams at the Toledo 44 with 59 seconds left. The Herd ran out the clock, as fans flooded the field with 25 seconds left and tore down the south goal post. Officials let the final 25 seconds run off the clock.

One fan suffered a possible broken leg in the melee.

The victory marked the first time in the school’s 101-year football history that it had won three consecutive conference championships, two in the MAC and one in the Southern Conference. It also gave Marshall its 100th win in the 1990s, the most of any team in NCAA Division I-A or I-AA.

“Winning 100 games, I don’t know if any team has ever done that in nine years,” Pruett said. “Two great defensive teams played here. Both laid it on the line. You have to be pleased with the way these teams played.”

Marshall turns its attention to the Motor City Bowl and a Louisville offense that leads the nation in yardage. First, however, the Herd will savor the win over Toledo, which complained much of the last week about having to use the visitor’s locker room and sideline.

For a while, it appeared as if Toledo’s “us-against-the-world” mentaility would work. The Rockets were outgained, but not outplayed in taking a 10-6 lead.

The Rockets took a 10-6 lead when Todd France kicked a 33-yard field goal with 14:40 left in the game, forcing Marshall to score a touchdown to regain the lead. The Herd did just that.

The Rockets spent much of the quarter in Marshall territory, but failed to capitalize, as Brian Klaner blocked Todd France’s 27-yard field goal attempt with 8:57 left in the third quarter.

Toledo drove deep into Herd territory, but tailback Chester Taylor fumbled at the Marshall 10 and Herd defensive tackle Dwayne Lewis recovered at the 5:01 mark of the third.

Marshall’s offense struggled, meanwhile, as Pennington limped in pain. The junior from Knoxville, Tenn., even left the game for one series and was replaced by true freshman Byron Leftwich, who threw an interception.

Marshall used deception to score first. The Herd lined up for a field goal from the Toledo 16, but holder Chris Hanson, the team’s punter, took the snap and raced through a huge hole on the right side of the line for a 9-yard touchdown.

Hanson, though, bobbled the snap on the extra point attempt and Marshall led 6-0.

The Herd spent much of the rest of the half bogging down, dropping passes or completing short out passes for little gain. The Herd also was plagued by penalties and missed two field goals.

Toledo had little success moving the ball, except when Wallace hit Taylor with a 48-yard pass to the Marshall 1.

One play later, Wasean Tait crashed into the end zone for a touchdown. France’s extra point gave the Rockets a 7-6 lead.