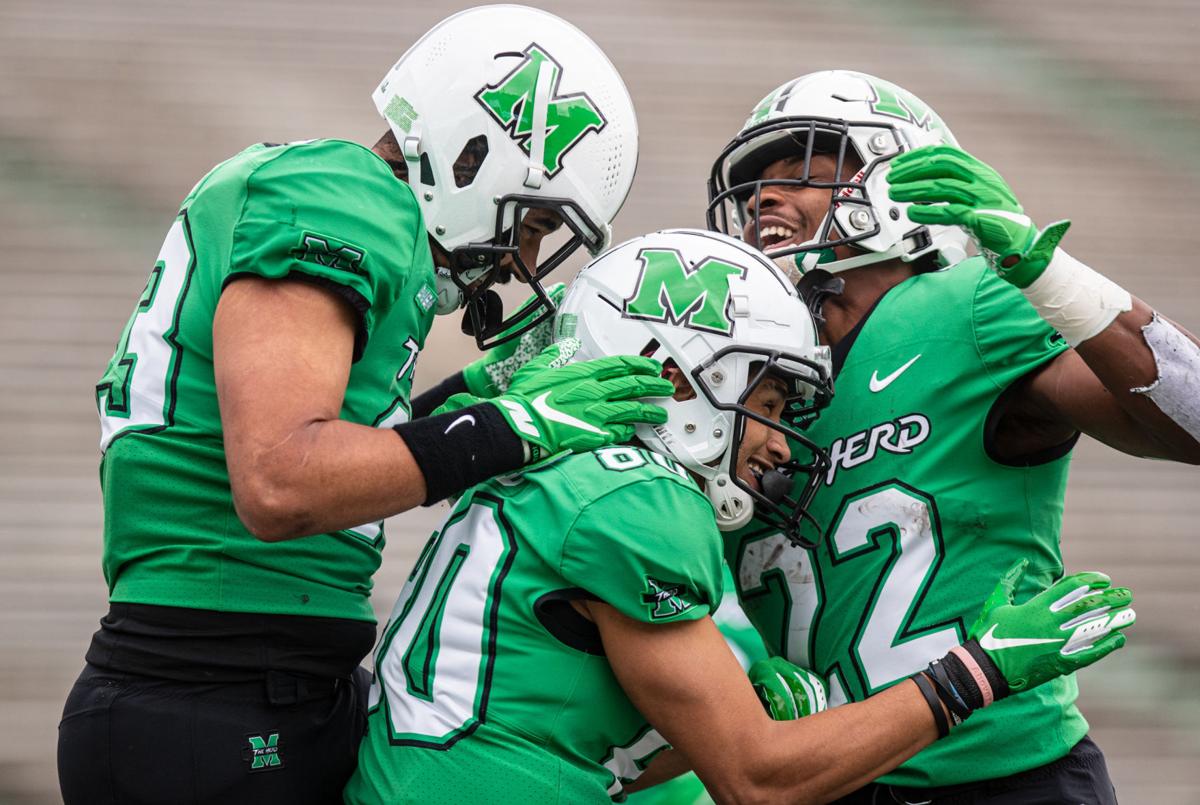 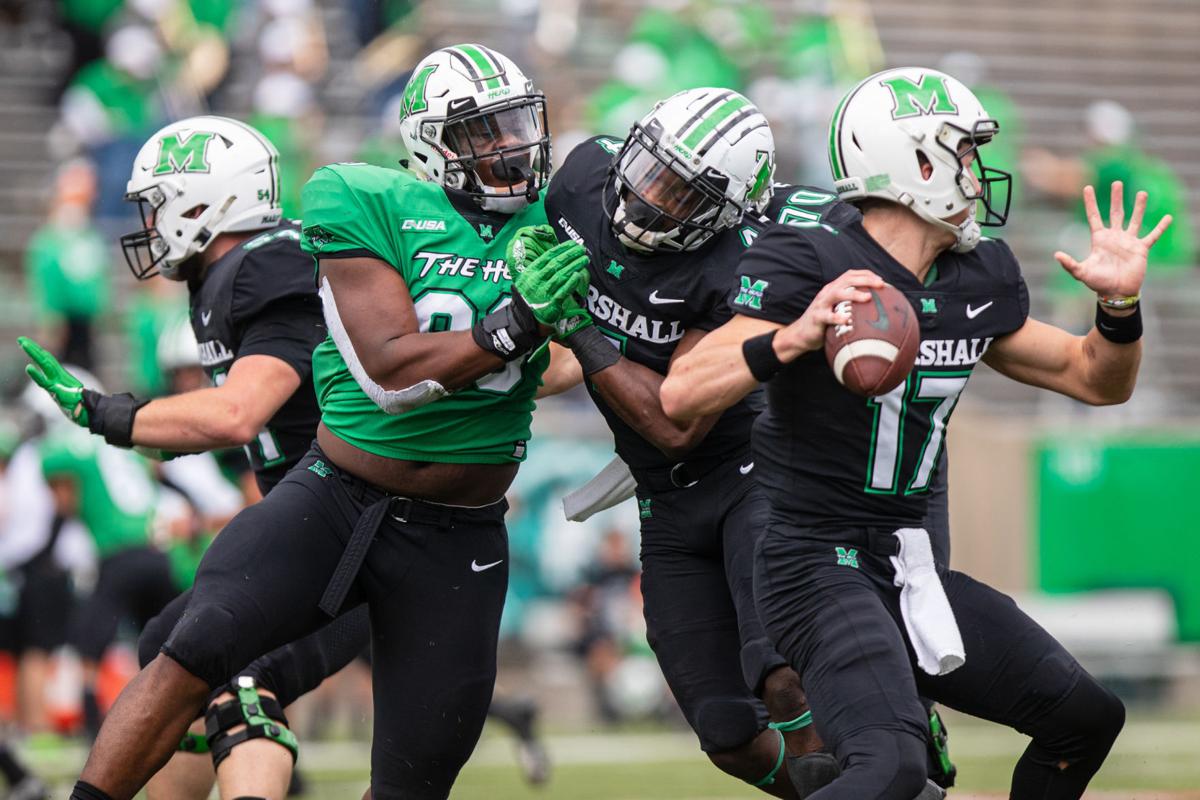 Marshall defensive lineman Esaias Carpenter (90) fights through a block by running back Lawrence Papillon (4) during the annual Spring Game on Saturday, April 17, 2021, at Joan C. Edwards Stadium in Huntington. 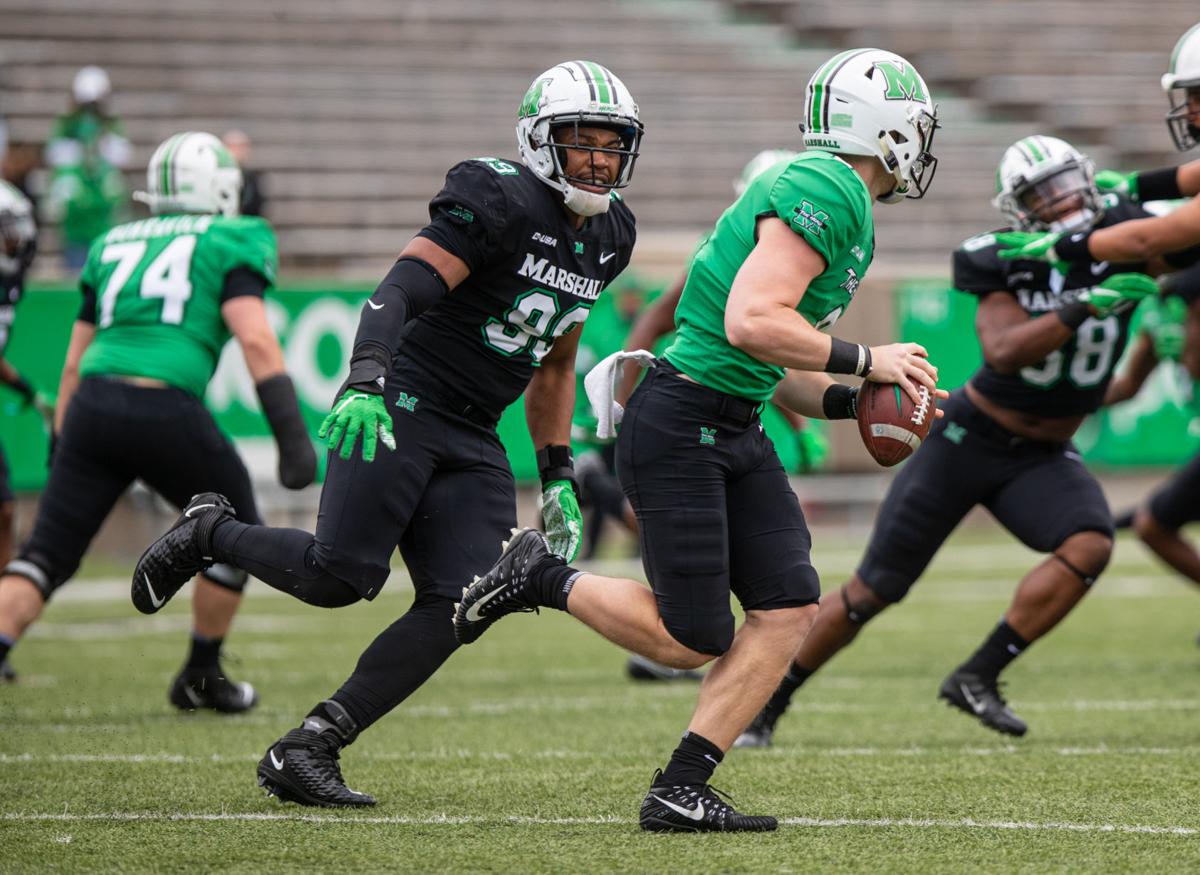 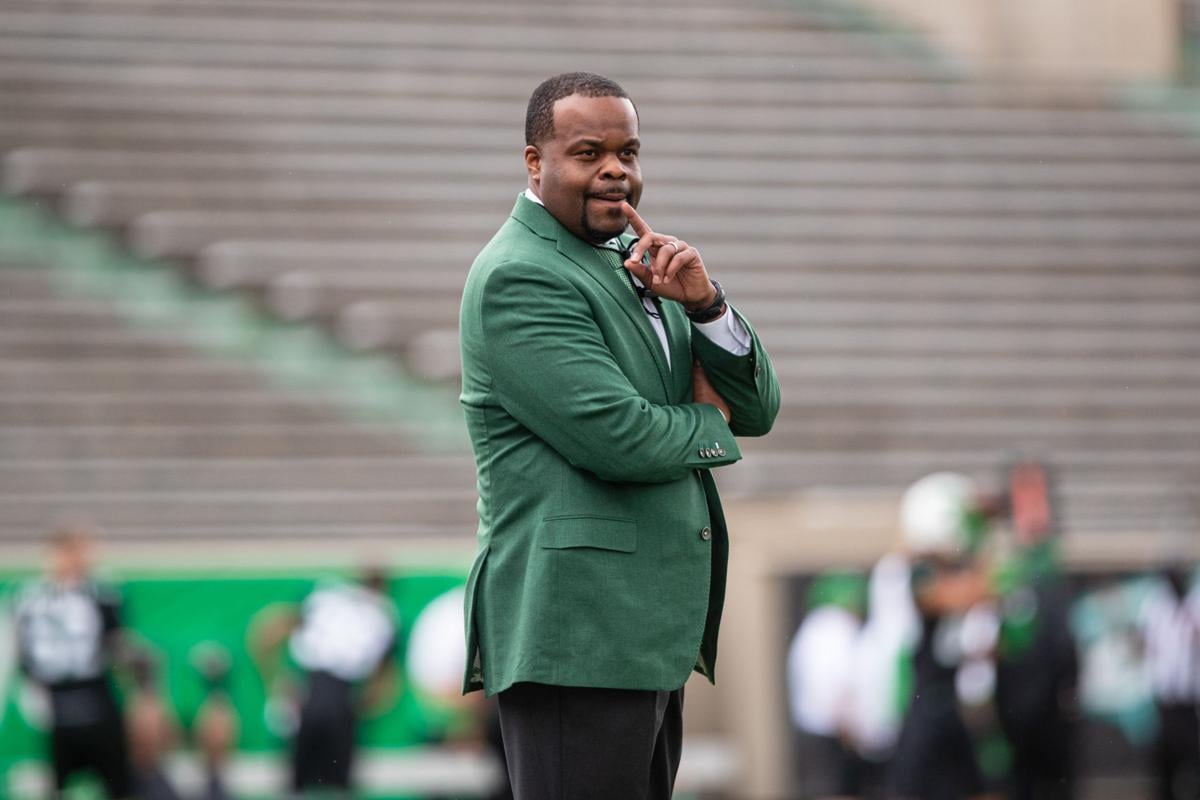 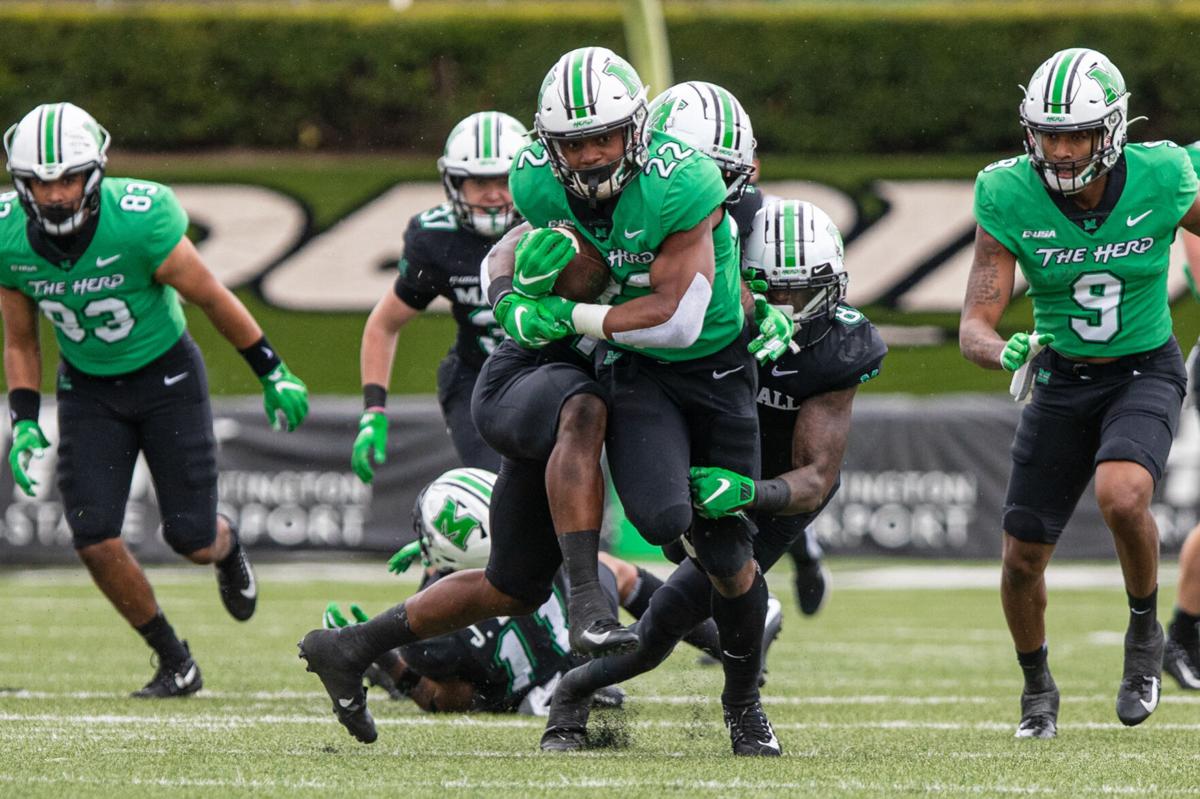 Marshall running back Rasheen Ali (22) breaks up field on a carry during the Thundering Herd's 2021 Spring Game on Saturday, April 17, 2021, at Joan C. Edwards Stadium in Huntington.

Marshall defensive lineman Esaias Carpenter (90) fights through a block by running back Lawrence Papillon (4) during the annual Spring Game on Saturday, April 17, 2021, at Joan C. Edwards Stadium in Huntington.

Marshall running back Rasheen Ali (22) breaks up field on a carry during the Thundering Herd's 2021 Spring Game on Saturday, April 17, 2021, at Joan C. Edwards Stadium in Huntington.

HUNTINGTON — When Marshall head coach Charles Huff announced that the Thundering Herd’s 2021 Spring Game was going to involve a live-game scenario instead of situational play, the decision was met with plenty of excitement.

That was not the reasoning for Huff’s decision, though.

Huff wanted to see his team perform in pressure situations, and the early portions of Saturday’s game showed why.

The first half featured plenty of jitters as players got used to game speed and tempo before settling in during the second half of Green’s 34-10 win over Black in front of 5,581 fans at Joan C. Edwards Stadium.

“These guys got in the arena and there was a little bit of juice and jitters and anxiety,” Huff said. “As the day went on, they kind of settled in and it really helped. It’s really going to help us moving forward, so we can fall back on these experiences.”

The unit that stood out the most on Saturday was the defensive line, which constantly got pressure and limited the Herd rushing attack.

Some was caused by Marshall’s offensive line being thin, but much was due to the consistency seen out of the Team Black defensive front (first-team defense), which had quarterback Grant Wells on the run from the start and got to him five times — all in the first half.

“Our defensive line did a really good job today creating some pressure early in the game,” Huff said. “I did think as the game went on the offense settled down.”

After a first half spent on the run, Wells took command in the second half of the game, especially in the fourth quarter.

During the final period, Wells completed seven of his nine passes for 115 yards and a touchdown, which came on a 33-yard pass to Shadeed Ahmed with 48 seconds left.

Wells finished 14 of 29 for 270 yards and two touchdown passes — both to Ahmed — but what impressed Huff the most was the on-field command that Wells started to show during the spring game.

“Standing down there on the field behind those guys, you could hear him being a leader, talking to guys, reminding guys of situations, of possible coverage looks,” Huff said. “I think he did a really good job.”

Ahmed finished with five receptions for 124 yards and two scores, breaking out in his first spring game in a Marshall uniform.

While the Marshall defense limited the rushing attack well throughout the day, Rasheen Ali showed flashes of speed and elusiveness that caught Huff’s attention.

That flash was tempered by a pair of dropped passes that Huff also noted.

“I think Ali did some good things, but probably dropped 60, 70 yards’ worth of passes with wide-open shots there,” Huff said. “He’s got to learn from that. I think he’ll bounce back, but you did see him sometimes be able to run strong, get vertical, get downfield. He is a big, strong running back.”

On the defensive side of the football, defensive tackle Immanuel Bush showed explosiveness against the run and the pass from the interior of the line, finishing with six tackles, including 2.5 sacks.

The Black team’s offensive highlights included a strong final drive from quarterback Luke Zban, who squeezed passes over the middle to Ethan Hahn for 28 and 23 yards respectively before hitting Knowledge McDaniel out of the backfield for a 4-yard touchdown on the day’s final play.

The lone injury concern came late in the first half when wide receiver Corey Gammage, whom Huff praised in commentary this spring, pulled up on a deep route and went down.

Huff confirmed that it was a tweak of the hamstring for Gammage, who was injured just one play after making his lone catch a 17-yard reception in traffic.

The practice was Marshall’s 15th and final session of the spring. Huff said Marshall’s players will concentrate on finishing the semester academically over the next two weeks before going home for a month. Players will return in late May.