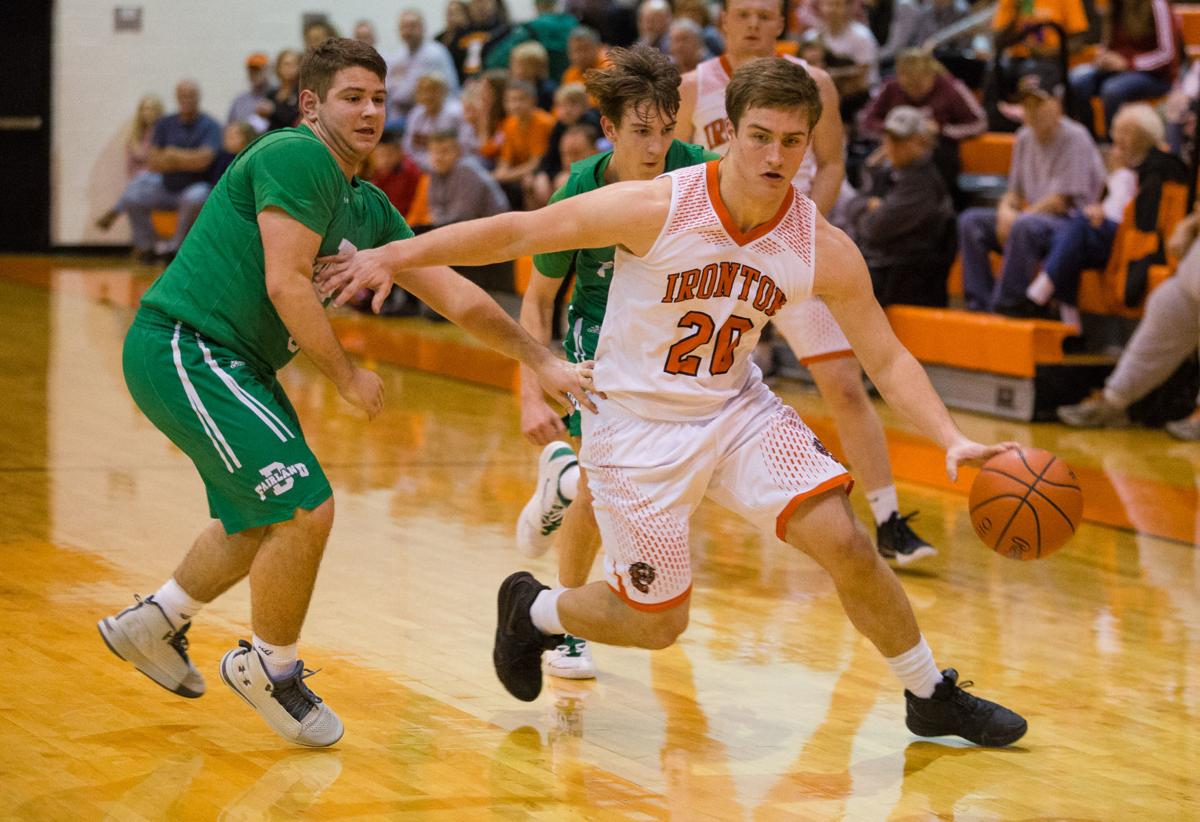 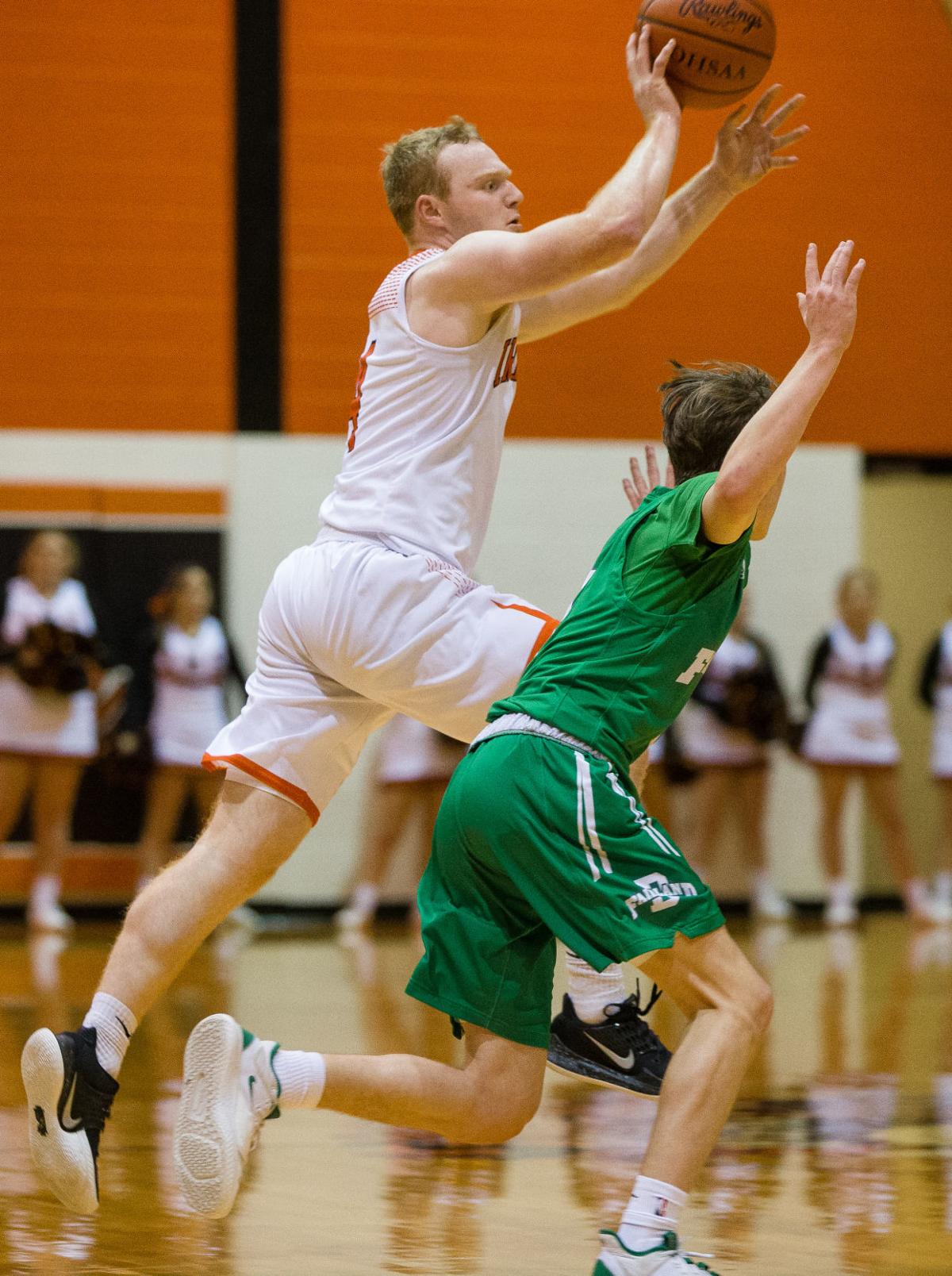 Ironton’s Gage Salyers, left, makes a leaping pass as he is guarded by Fairland’s Aiden Porter during a high school boys basketball game on Tuesday, Jan. 14, 2020, at Ironton High School. 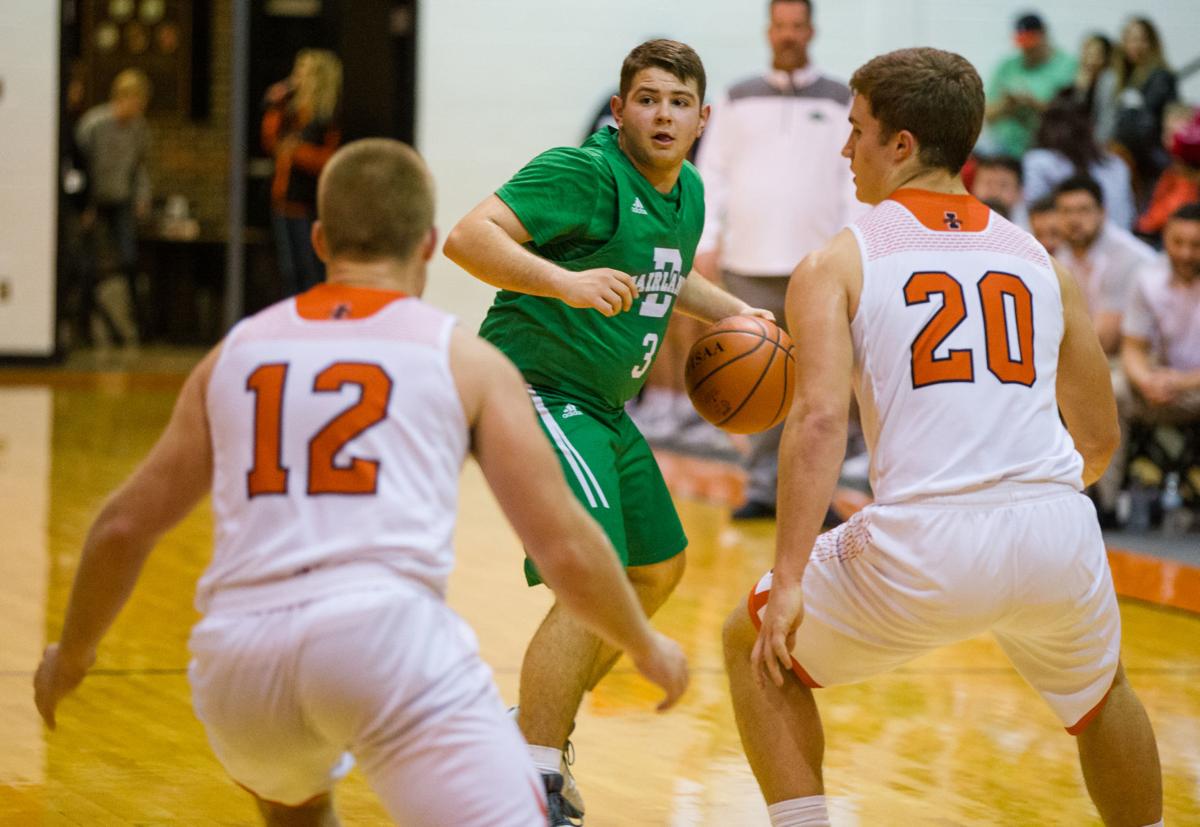 Fairland’s Clayton Thomas (3) looks to start a play as he is guarded by Ironton’s Reid Carrico (20) and Jordan Grizzle (12) during a high school boys basketball game on Tuesday, Jan. 14, 2020, at Ironton High School.

Ironton’s Gage Salyers, left, makes a leaping pass as he is guarded by Fairland’s Aiden Porter during a high school boys basketball game on Tuesday, Jan. 14, 2020, at Ironton High School.

Fairland’s Clayton Thomas (3) looks to start a play as he is guarded by Ironton’s Reid Carrico (20) and Jordan Grizzle (12) during a high school boys basketball game on Tuesday, Jan. 14, 2020, at Ironton High School.

The first period proved to be a nightmare for the visiting Dragons on Tuesday as Ironton raced to an 18-4 lead to get the Fighting Tigers fans in the Conley Center excited.

Speed decided a change was needed. He employed the press defense and it forced turnover after turnover for the next three periods.

Fairland outscored Ironton 14-2 at the start of the fourth period, again triggered by the press/turnovers, and the Dragons went on to prevail, 63-46, to remain unbeaten in Ohio Valley Conference play. The Dragons are 13-1, 7-0 in the OVC. The stunned Fighting Tigers drop to 5-5, 4-3 in the league.

“The first period was one of those things,” Speed said. “We got good looks, kept missing. It was unbelievable.”

Fairland started its familiar press at the start of the second period and the tide turned in its favor as the visitors cut the deficit to 27-26 at the break. It was all Dragons, ranked No. 10 in Division III in Ohio, in the second half as guard Clayton Thomas hit four three-pointers for all the team’s points to pull even at 38-38.

Gavin Hunt scored the first seven points of the final period as the Dragons started to pull away. Ironton turned the ball over 24 times. Fairland has now won eight in a row against Ironton and 62 of its last 63 OVC contests.

“We had to get something. We went to the press,” Speed said. “We had to pick up the tempo. It felt like we got our energy back, the energy we didn’t have at the start.”

First-year Ironton coach P.J. Fitch knew what was coming, but his players didn’t handle the heat the way he wanted.

“We knew it was coming,” Fitch said. “Wheelersburg ran the same press. We beat it five times, they pulled it off and we won. It got in our heads a little, and Thomas hit those threes.”

Thomas, held scoreless in the first period, went to the bench in the second with three fouls. He still led his team with 24 points. Aiden Porter added 19.

“We’re very fortunate to come on the road, play like we did in the first period and get the win,” Speed said. “This is a tough place.”

Thomas added a three and some nifty assists to his teammates.

“He’s got great vision,” Speed said. “Back door, long pass. Don’t turn your head. He finds his teammates and they find him.

“In the fourth, if we didn’t get transition, we ran our offense,” Speed said. “We played five on five.”

Fitch used all his timeouts during the game, but to no avail. Fairland outscored the hosts, 25-8, in the final eight minutes.

“Can’t let him catch the ball,” Fitch said of Thomas. “In the fourth, they spread the floor. We mixed things up. If we don’t press, they pull the ball out. You can’t get down against Fairland.”

On Friday, Fairland is home against Coal Grove and Ironton travels to Gallia Academy. Both game are at 7:30 p.m.