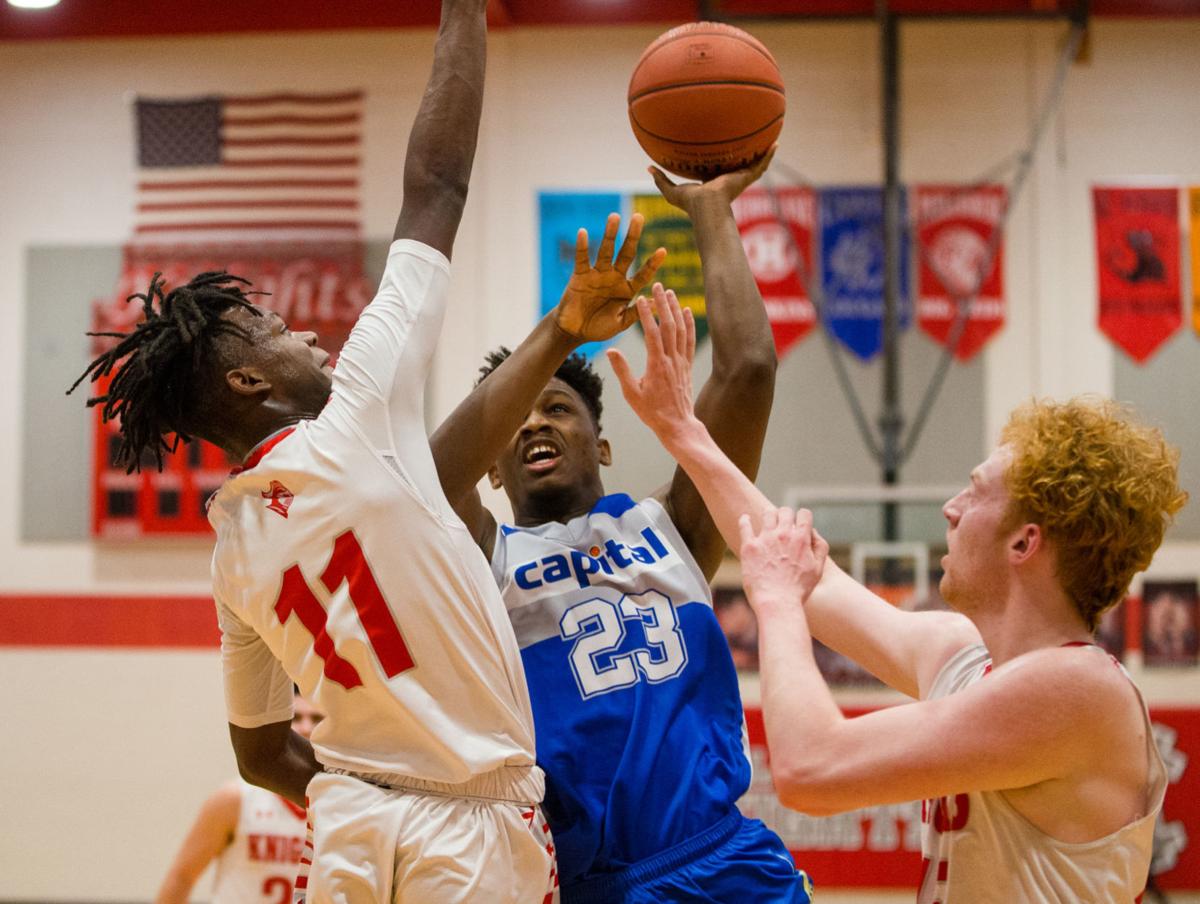 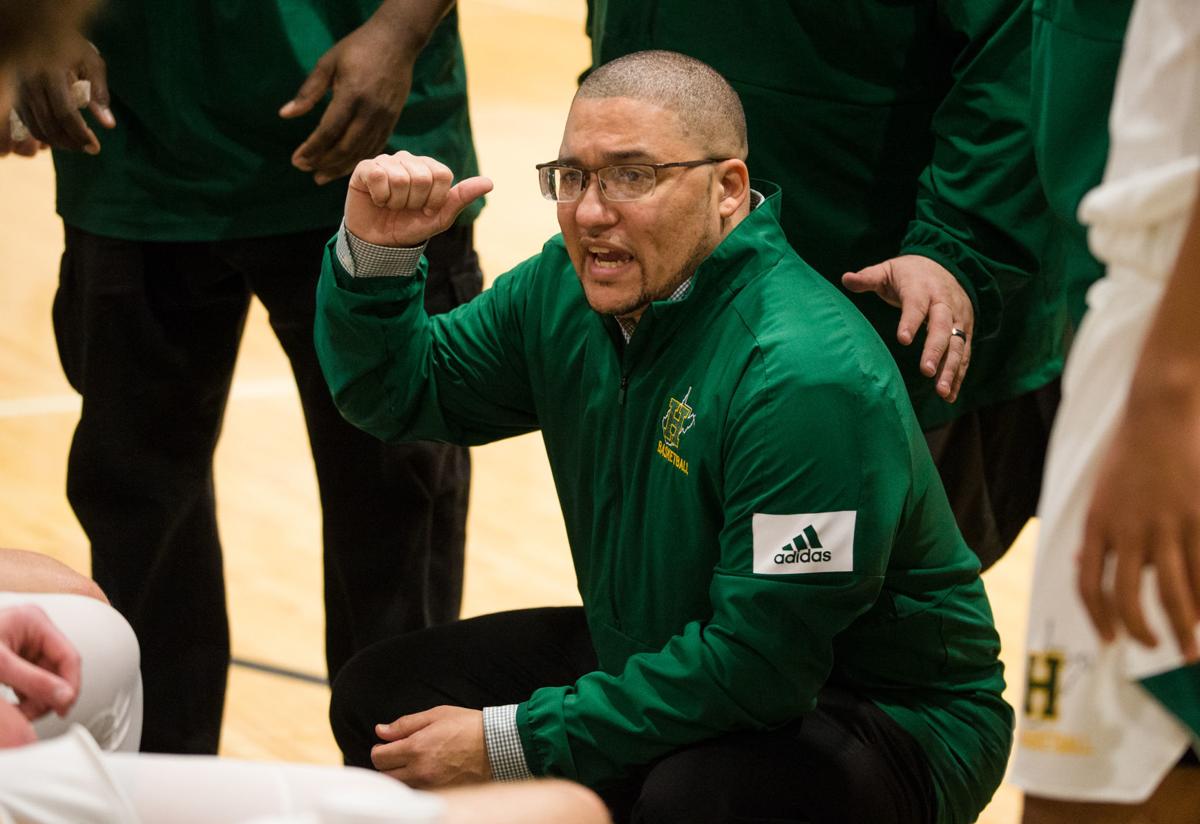 Huntington head coach Ty Holmes talks with players during a time out as the Highlanders take on George Washington during a high school boys basketball game on Wednesday, Jan. 15, 2020, in Huntington. 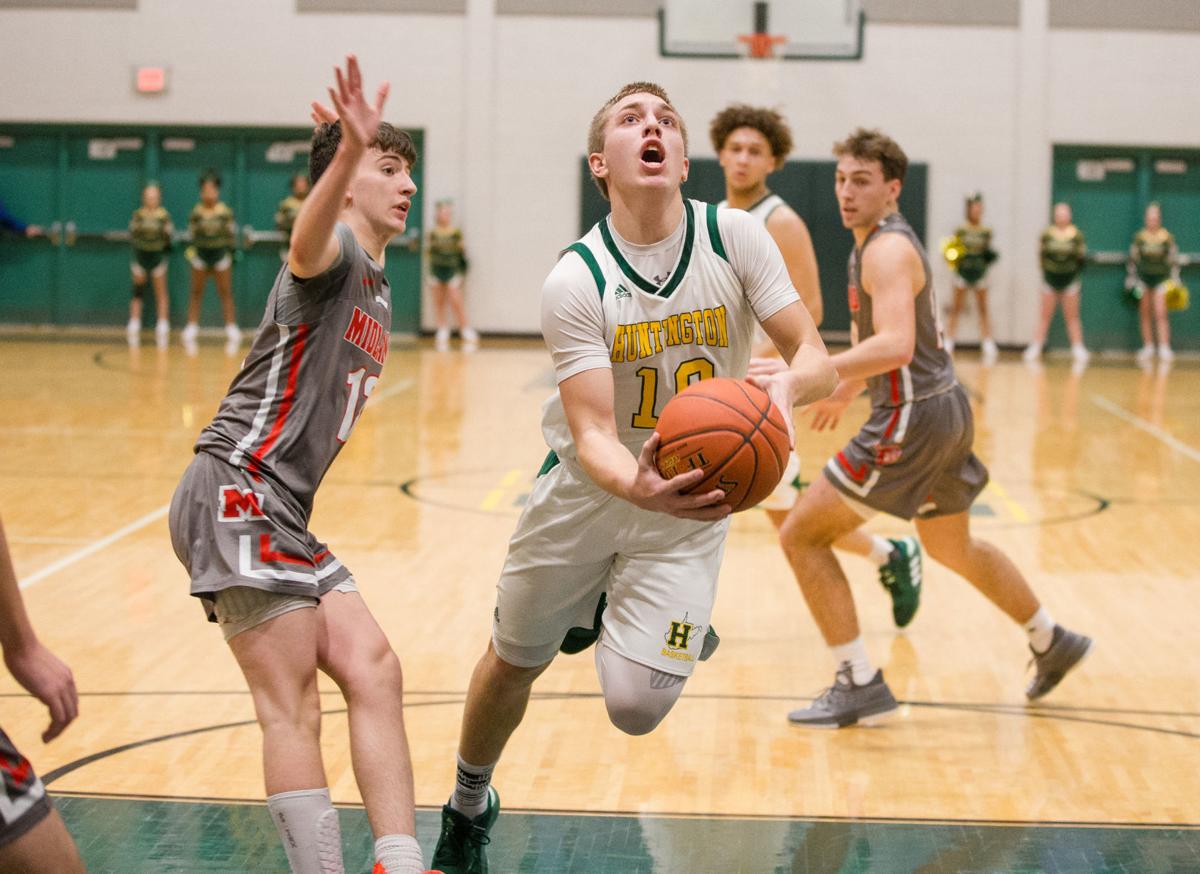 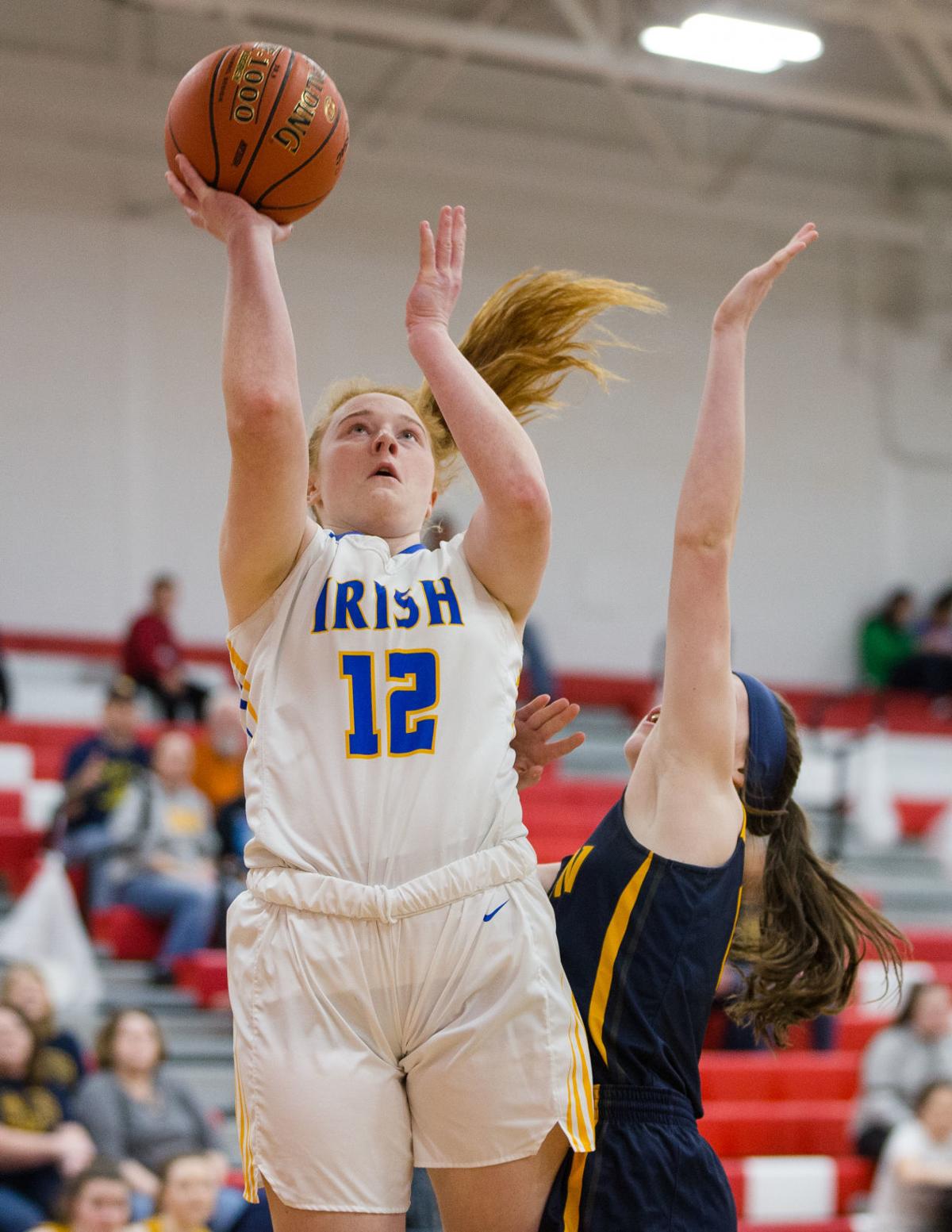 Huntington St. Joe's Abby Lee (12) puts up a shot against a Buffalo defender in the Class A, Region IV, Section 2 girls basketball tournament on Tuesday, Feb. 25, 2020, at Hurricane High School. 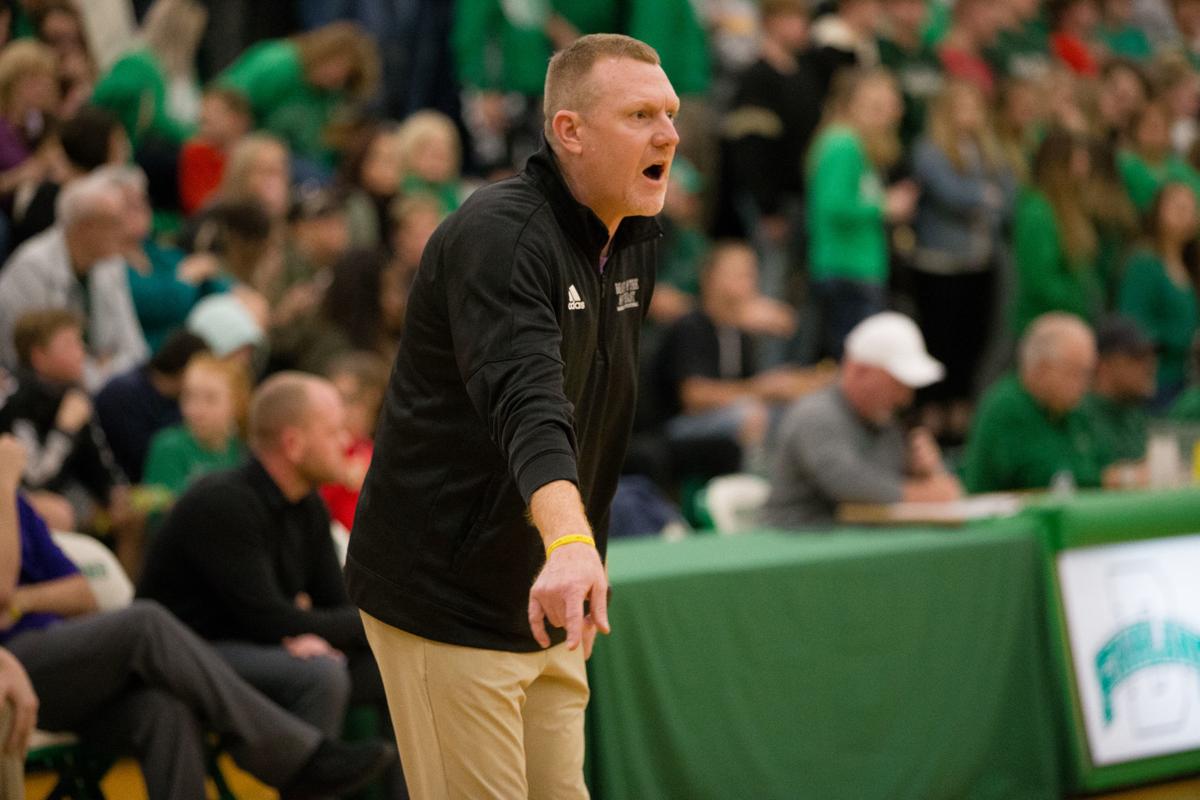 Huntington head coach Ty Holmes talks with players during a time out as the Highlanders take on George Washington during a high school boys basketball game on Wednesday, Jan. 15, 2020, in Huntington.

Huntington St. Joe's Abby Lee (12) puts up a shot against a Buffalo defender in the Class A, Region IV, Section 2 girls basketball tournament on Tuesday, Feb. 25, 2020, at Hurricane High School.

HUNTINGTON — Finances have sounded the buzzer on the shot clock in high school basketball.

Some Tri-State coaches are for it, others against, but all agreed that how to pay for installation and an additional official to run a shot clock make implementation unlikely.

The National Federation establishes rules for all high school sports.

“Information was given to the Basketball Rules Committee that shared the votes in individual states on how coaches and officials voted in support of or non-support of the shot clock rule,” said Theresia Wynns, NFHS director of sports and liaison to the Basketball Rules Committee. “The conversation among the committee members explored the pros and cons of enacting the proposal as a rule for all states and likewise for state adoption. The committee will continue to explore the shot clock issue.”

“I am for the shot clock,” Huntington High School boys coach Ty Holmes said. “I think it keeps the game at a good pace. The game is to be played up and down and not standing around.”

Holmes, though, doesn’t expect to see a shot clock in HHS’ Lucas-Archer Gym in the near future.

“I understand that cost plays a factor and also finding someone to work it could play a factor, but I like the idea of a shot clock,” Holmes said.

“I am not a fan of it in high school basketball,” Davis said. “I think it takes some of the aspects of coaching a style that is best suited to your personnel away.”

South Point girls coach David Adams, also the school’s athletic director, looked at the issue from each of his positions. As a coach, Adams liked the idea. As an administrator, he didn’t.

“I like it as a coach because you can stay in your defense and don’t have to pull out of it if someone holds the ball,” Adams said. “As athletic director, it’s a big cost for schools. You’d just about have to hire another official to make it work. That would cost and you’d spend thousands of dollars to hook them up.”

Adams said the shot clock is viable for professional and college basketball, but not for high school.

Hurricane boys coach Lance Sutherland agreed with Adams’ assessment, saying he is OK with the clock but not at the high school level. He also agreed with Davis that the clock would take away from coaching.

“I think it would cut down on the strategic part of the game,” Sutherland said. “It would also hinder teams like us, for example this year. In our sectional game (a 40-29 loss to Cabell Midland) we held the ball and had our chances going into the fourth quarter. If we would have had to play by the shot clock rules we may not have been able to do that.”

Sutherland said that some teams might still be able to deploy a fairly deliberate style with a shot clock, but it would be difficult in high school.

“You can still use that strategy with a shot clock,” Sutherland said. “You just have to be able to play really good defense and make your shots count.”

Cabell Midland boys coach J.J. Martin played with a shot clock at Marietta College and said he thinks it would be beneficial for high school ball, particularly players who will play in college.

“I think the shot clock in high school would only add excitement, especially with two really good teams playing one another,” Martin said. “I don’t agree with holding the ball for eight minutes, although I understand it. It takes away from the kids and the work they put in to play the game.”

Adams said effectively and consistently working the shot clock would be a challenge.

“Not many teams can do that,” Adams said.

Fairland girls coach Jon Buchanan expressed a similar take as Holmes. Buchanan said he is a big fan of the shot clock.

“With the way we try to play at Fairland, we want a fast game with a lot of possessions,” Buchanan said. “I’m also a fan of the shot clock because I think it forces the players to make quicker and more decisions in the game.”

Buchanan’s program has produced several college players. He said they could have benefited from a shot clock.

“Our players moving on to the collegiate level will play with a shot clock, so why not implement that at the high school level as well.”

“I understand the strain on schools to pay an additional person and have another person work at games,” Layne said. “From a competitive standpoint, I do believe the shot clock would prepare players better for college and make the game at a faster pace. It would also not allow teams to hold the ball, which I agree should not be a part of high school basketball.”