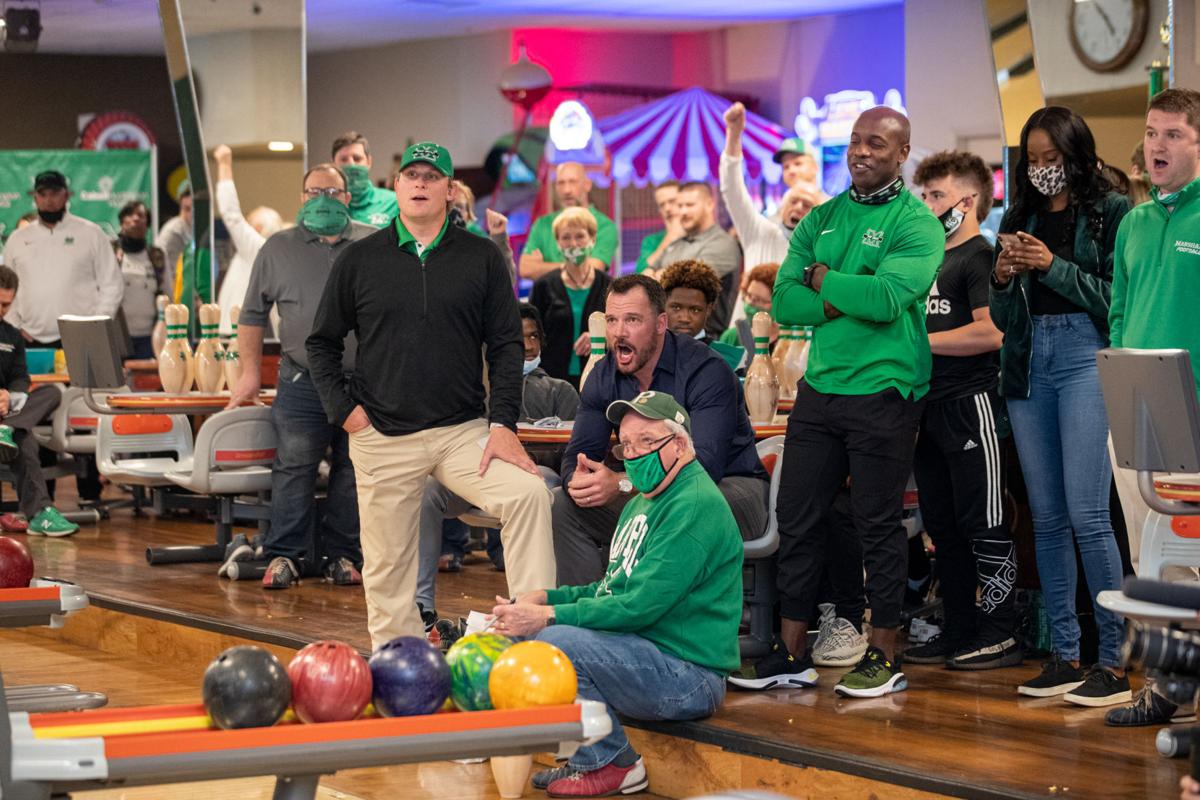 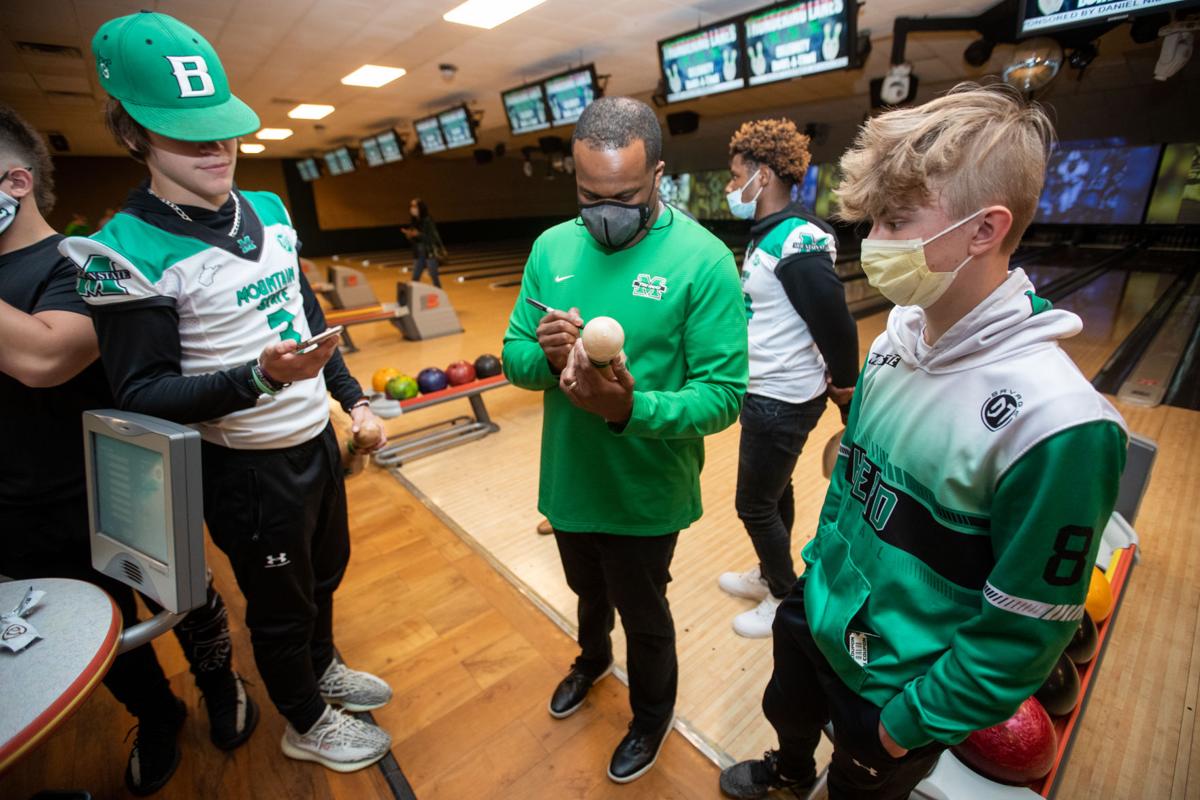 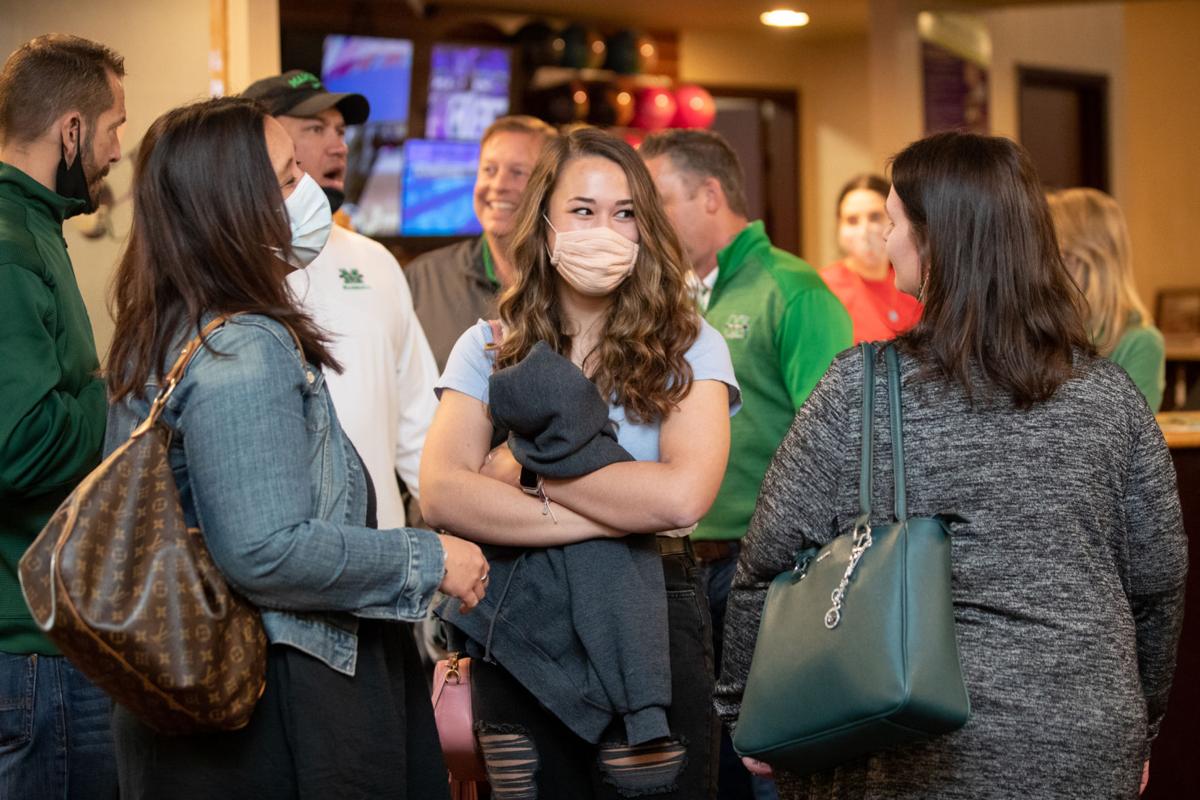 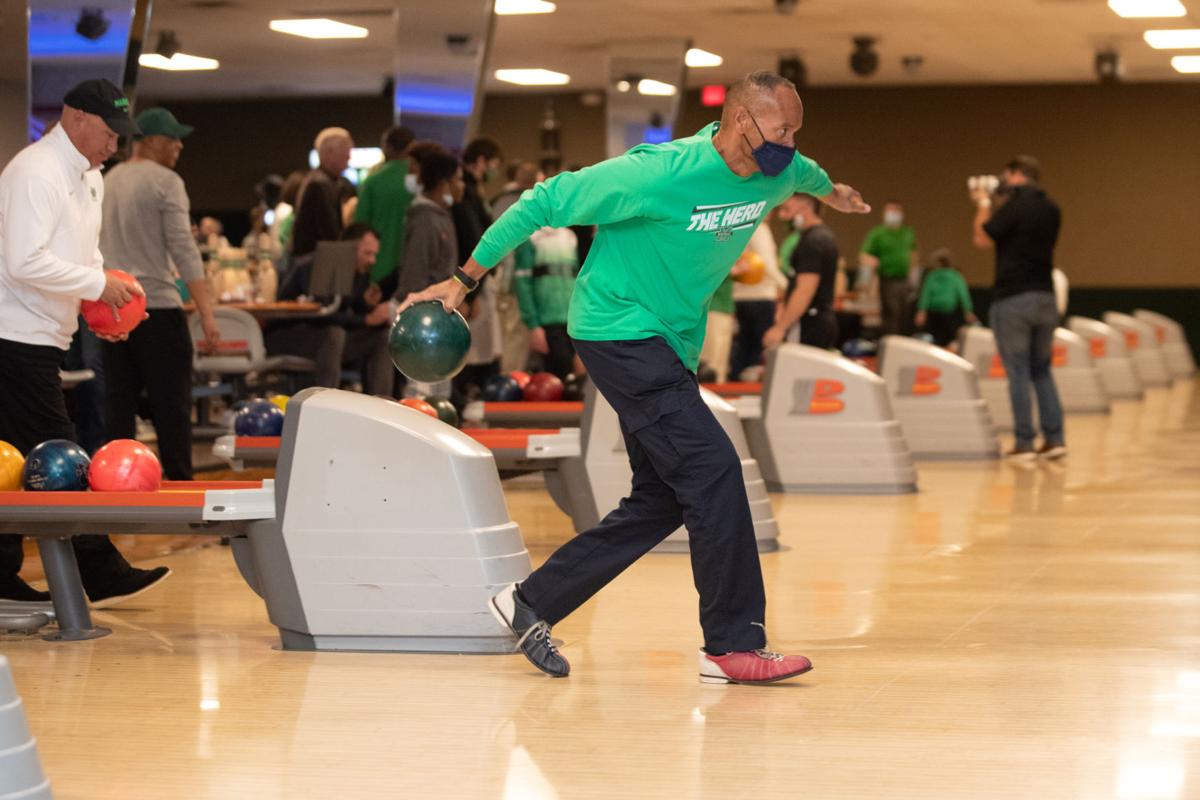 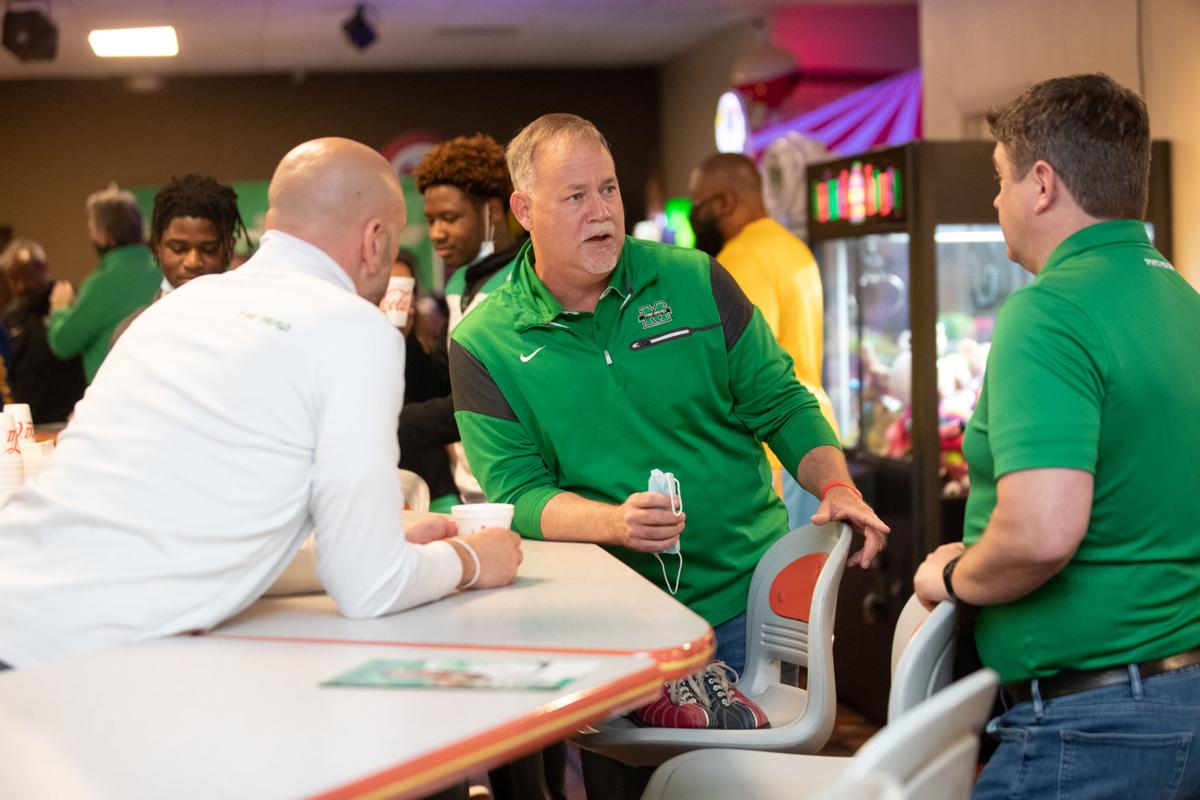 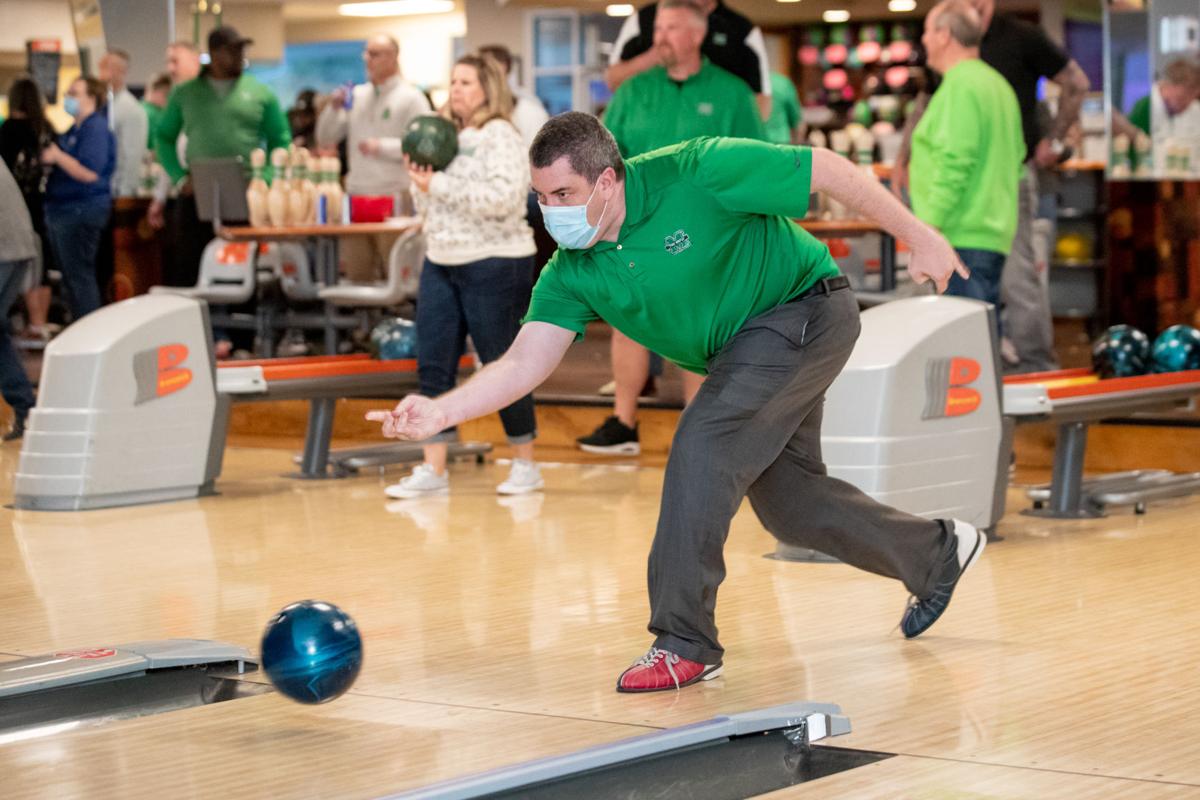 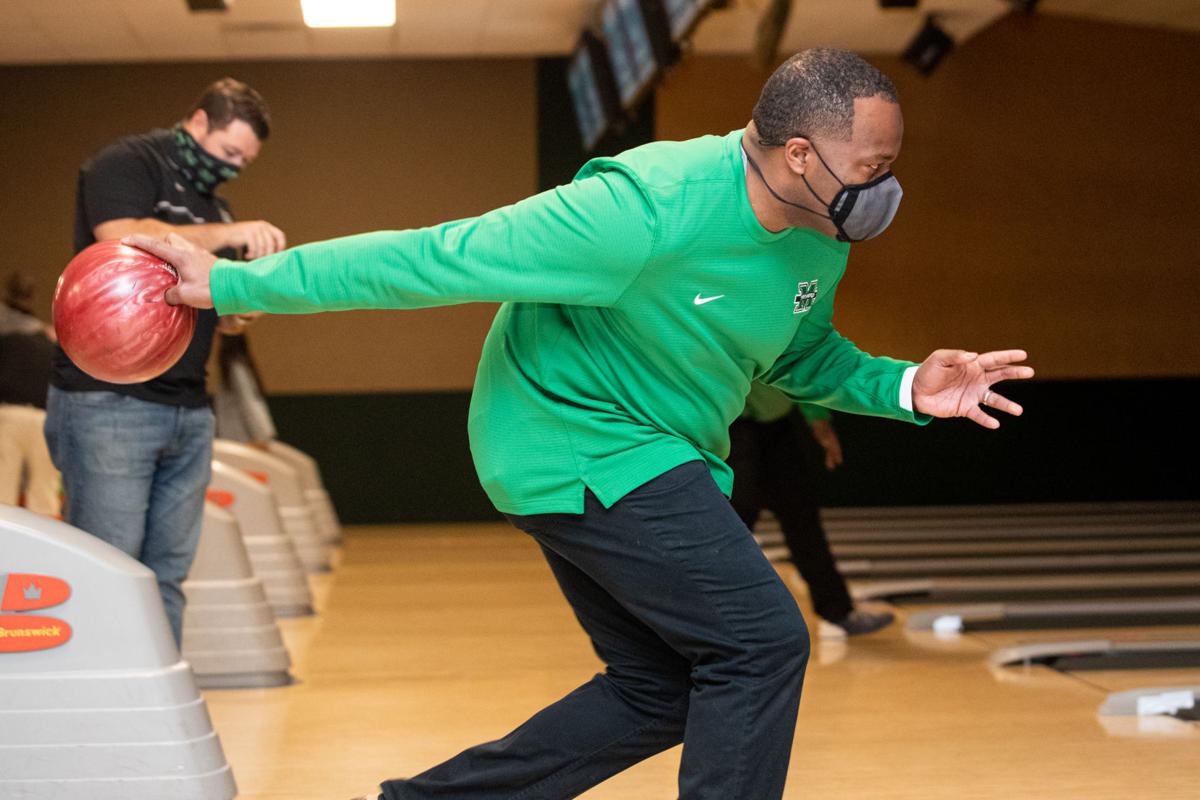 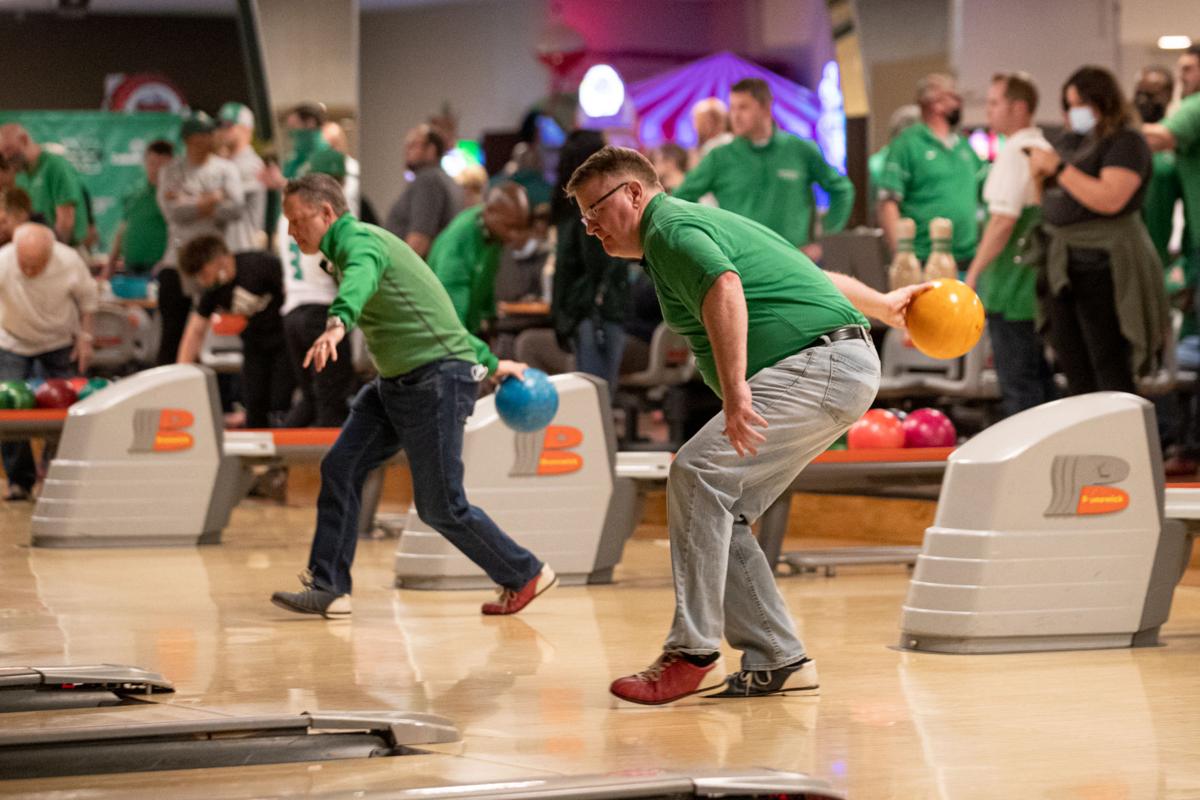 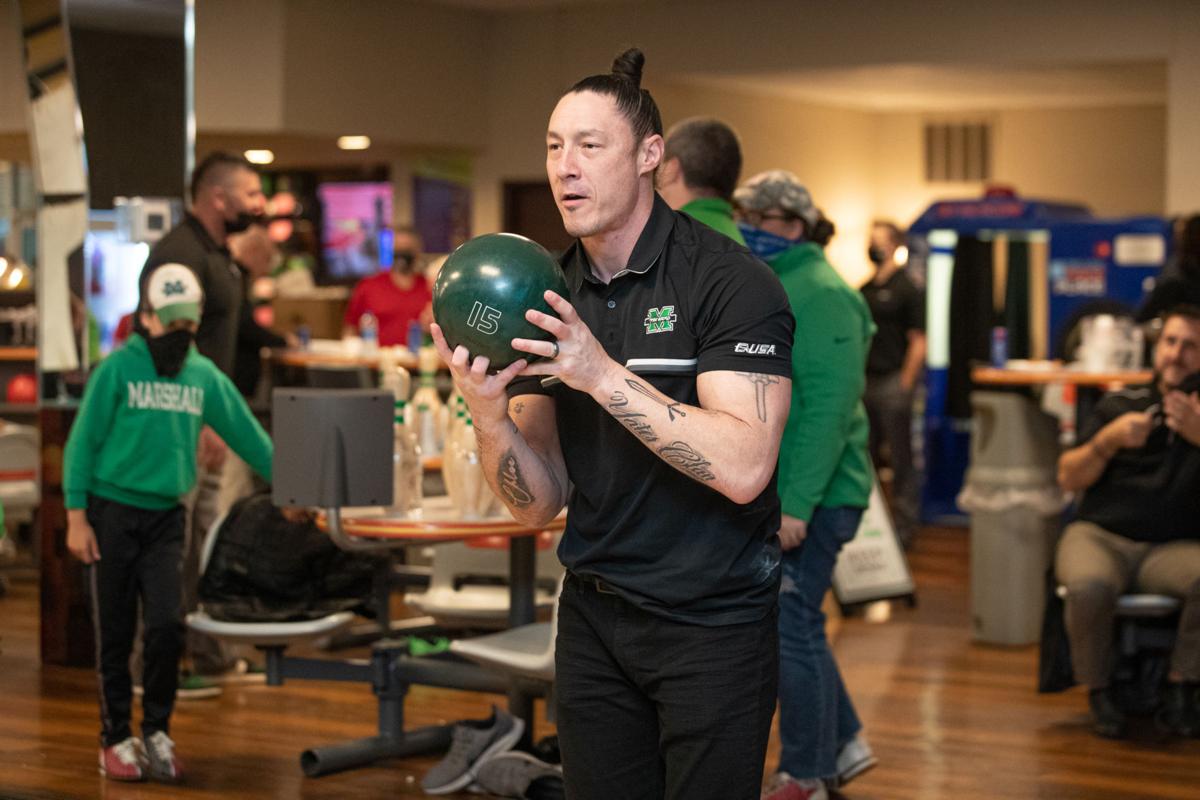 HUNTINGTON — On Friday evening, some of Marshall’s former greats got together for the Thundering Lanes Bowl-A-Thon to raise money for the Herd football program.

While most have gone their separate ways since their time with the Herd, Marshall and Huntington are still considered as home for those who made the journey back.

For many of those players, they met Marshall football coach Charles Huff for the first time on Friday, and while each wanted to learn what Huff was about, they all wanted to make sure that Huff knew what Marshall was about from their perspective, too.

As Huff looked over the crowd at Strike Zone Bowling Center to address those players, it was clear he got that message.

“There’s a lot of guys who rallied their teammates around this weekend that I really appreciate, but it just speaks a lot for the history and tradition here,” Huff said. “When people really look at what Marshall stands for, it’s this. It’s the people coming back home, it’s the family atmosphere, it’s the never-die mantra, it’s the ‘we pull together for a good cause.’ That’s what this weekend’s going to show.”

Former Marshall quarterback great Chad Pennington, whom Huff has communicated with consistently since his hire, reiterated the message that, no matter what era Marshall players took the field in, they are all one team, which is what makes events like Friday’s a success.

“(Coach Huff) really understands the importance of relationships, and I think here at Marshall University, that’s what our university has to be about to be as successful as we need to be and to reach our full potential,” Pennington said.

As players filed into Strike Zone Bowling Center around 6 p.m., smiles and laughs were shared as some players were seeing each other for the first time in over a decade.

“These types of events where you get with some of the friends you haven’t seen in a long time and you grew up here with, it’s so much more special because when you see them, you would not think that 15 or 20 years have passed by,” Yates said. “I’m having a conversation with (Chris) Massey over here right now and it’s just as if I’d seen him a couple days ago.”

Yates had a few stories that really showed the small-world nature of college football while also portraying how tight that the family aspect of Marshall can be.

The former Herd linebacker — whom teammates all beamed about looking like he could still suit up — said the world brings those brothers back together in random ways.

“Fifteen years ago, I saw (Scott) Pettit in California at a shoe store,” Yates said. “We’re looking at each other and he’s like, ‘Yates?’ and I say, ‘Pettit?’ It’s a small world. It really is.”

Perhaps that wasn’t the most telling family-type story associated with Yates, however.

Yates also credited a former Marshall teammate — Doug Chapman — for introducing him to his wife, Michelle, which showed the bond is greater than just football, even though football is what brought everyone together.

“I actually met my wife when I was living in Chapman’s house while I was playing for the Vikings,” Yates said. “He took me in and was showing me the ropes with the Vikings and my wife and I met there.”

Chapman, who is now on Huff’s initial staff in an off-field role, said that part of his involvement with the new staff is to make sure the connections, such as Friday’s, remain in tact and that everyone who is new to the fold understands the ‘one-team’ concept that Pennington was discussing.

“With us being around the younger guys and the new coaches, we’re going to show them how we do Marshall football,” Chapman said. “What you’re seeing tonight (Friday) is a sample of how it’s done. Tomorrow, the spring game, we’ll show them how it’s done. We want to take that and build off of it.”

Chapman said that his example of how the eras merge is with him sharing an office with Mike Bartrum, who is also in an off-field capacity with the program now. Chapman said those who come in to speak with them think the two played at the same time because of the bond they share.

That type of bond and love with players from all eras of Marshall football is what convinced Chapman that coming back to Huntington to join Marshall’s staff was the right move in his life, which he uses as a personal example each day in his new role.

“To me, it’s big because it’s bigger than football,” Chapman said. “This city, this community has treated me like a son, a brother and a friend for as long as I can remember. To have the opportunity not just to come back in a capacity where I’m helping the football program, but being able to be in the community and be around the people who helped me get to the levels I’ve achieved in life, it’s a dream-come-true.”

The event was put on by Marshall’s Big Green Scholarship Foundation and Quarterback Club with proceeds going toward renovations to the Shewey Athletic Building.