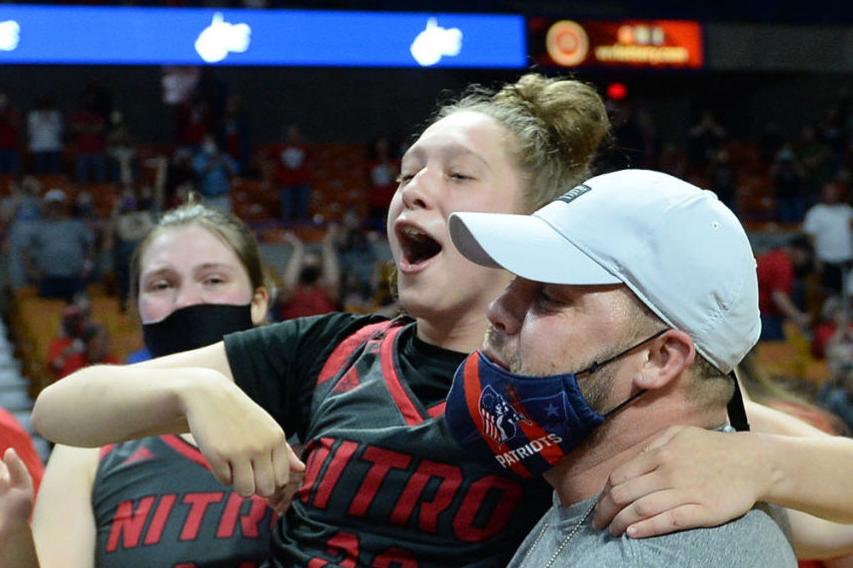 Carried by Nitro supporter Chris Feldhaus, Wildcats All-State point guard Baylee Goins (right) celebrates with her teammates and coaches after Nitro beat Fairmont Senior 51-45 for the Class AAA state championship Saturday. Goins was injured in the first half and did not return to the game. 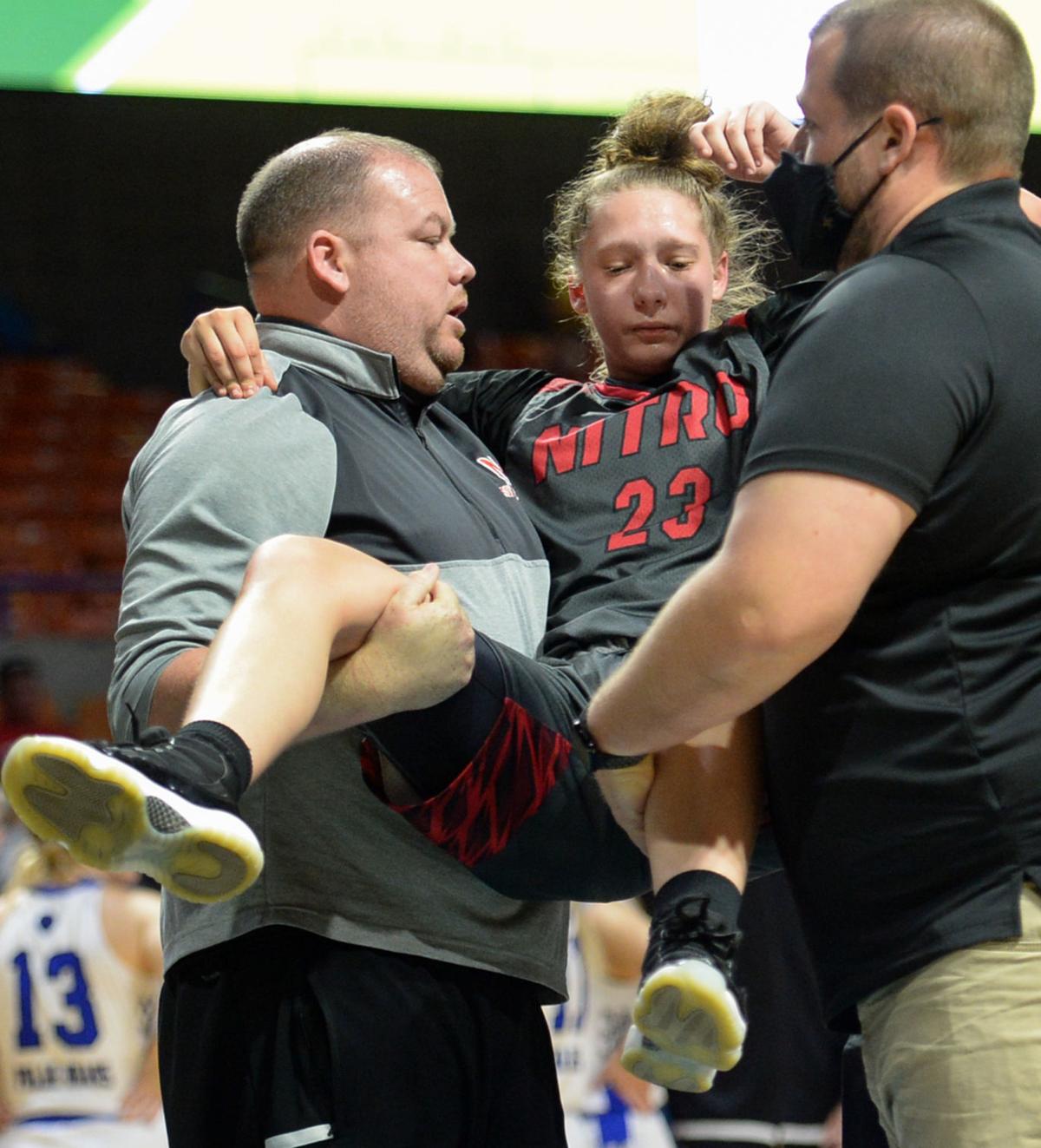 Nitro’s Baylee Goins is carried off the court after being injured while going up for a layup in the first half of the Class AAA state tournament championship game against Fairmont Senior.

Carried by Nitro supporter Chris Feldhaus, Wildcats All-State point guard Baylee Goins (right) celebrates with her teammates and coaches after Nitro beat Fairmont Senior 51-45 for the Class AAA state championship Saturday. Goins was injured in the first half and did not return to the game.

Nitro’s Baylee Goins is carried off the court after being injured while going up for a layup in the first half of the Class AAA state tournament championship game against Fairmont Senior.

There have been a lot of implausible and inspirational moments throughout the years at the girls basketball state tournament, but few can match what happened Saturday evening at the Charleston Coliseum.

After losing All-State point guard Baylee Goins, one of West Virginia’s top players and the team's heart and soul, to a possible major knee injury midway through the second quarter, Nitro somehow found the resolve to not only keep going, but to knock off unbeaten and No. 1 seed Fairmont Senior 51-45 in the Class AAA title game.

It’s the first basketball championship in school history for either the girls or boys programs at Nitro, and it came 20 years after the Wildcats’ only other appearance in the girls state finals.

Taylor Maddox scored 11 of her team-high 17 points following Goins’ injury, Lena Elkins came off the bench to provide 10 points and Brooklyn Bowen grabbed 10 rebounds to lead the No. 3 seed Wildcats (18-1), who ended the season with 15 straight wins.

“I think I’m still in shock and awe,’’ said Nitro coach Pat Jones. “I told the girls at halftime I believe in them, and they couldn’t give up. There were two quarters of basketball left and we were only down two points. And they never gave up. Their fight is unbelievable.’’

Things couldn’t have gone much better at the start for Nitro, which burst out to a 16-1 lead in the first quarter and was still up 18-14 when Goins went to the floor in a heap with 4:15 left in the second quarter after starting a drive to the basket in traffic. She remained on the floor for a few minutes, grabbing her knee, a couple times slamming her hand on the floor in frustration. She had five points, three rebounds and two assists at the time. It's feared that she damaged her ACL and an MRI will be scheduled.

Goins leads the team in scoring, assists and steals and does most of the ball-handling, and her absence was apparent right after the injury, as Nitro turned the ball over on eight of its final 11 possessions of the second quarter and Fairmont (17-1) went into halftime leading 22-20.

Moreover, Fairmont led 29-18 in rebounding, including a whopping 19 offensive boards as it kept pounding the glass.

But the Polar Bears never led by more than two points in the second half, and Nitro kept the lead for the final nine minutes despite 28 turnovers and a 45-38 rebounding deficit.

“We just wore it together,’’ Maddox said. “We knew we could do it at the beginning of the game.’’

One item that did help Nitro was working its way into the 1-and-1 and double bonus in the second half, and making 7 of 10 free throws in the final quarter as the Polar Bears remained just a few points down.

Marley Washenitz, also considered one of the state’s top players, led the Polar Bears with 11 points, nine rebounds, four assists and four steals. However, she went just 5 of 26 shooting overall and 0 of 10 on 3-pointers.

“We shot the ball [74] times,’’ said Fairmont coach Corey Hines, “and the ball didn’t go in. We had our opportunities. It’s unfortunate, but sometimes that happens in basketball.’’

“First, I’d like to say a prayer for Baylee,’’ Hines said. “You hate to see it anytime someone goes down with an injury. Both teams played hard and I was impressed with the way their team stepped up when she went down.

“I don’t think we really needed to change the game plan. We had a lot of opportunities, and they didn’t fall.’’

Fairmont’s Meredith Maier ended the game with 22 rebounds, 13 of them offensive, and scored eight points.

Elkins, known more as a pitcher for Nitro’s softball team, scored all 10 of her points in the second half, going 4 of 4 from the floor and 2 of 3 at the line. She took back-to-back feeds from Maddox for layups that gave the Wildcats the lead for good at 32-28 after three quarters.

“I’m not going to single out an individual player,’’ Jones said. “It was an all-around group effort. This team never gave up. I told them all year there may come a time when Baylee doesn’t play, maybe she’s sick or maybe she’s injured. We still have to step up and we still have to win.’’

Jones noted that Goins fouled out with 4-5 minutes left in the game at Logan this season, but the Wildcats were still able to pull out the win in a tough venue.

“That showed the growth in us,’’ Jones said. “That showed the maturity. I told them it could happen again. I didn’t know it would be an injury. There’s no ‘me’ on this team, it’s ‘we.’’’

After being carried off the floor and spending some time in the trainer’s room, Goins returned to the court with crutches and spent most of the second half sitting at the end of the Nitro bench. At first, she was being consoled by team personnel, but as the improbable turned fact and the Wildcats pulled out the win, she could be seen offering encouragement in late team huddles.

“She’s won every individual accolade except player of the year,’’ Jones said, “and she doesn’t want them. She wants a state title, and that shows her leadership as a player. She could have stayed in the trainer’s room with her leg propped up or on crutches, but she was out there telling the team, ‘I believe in you. Keep fighting. We can win this game.’ She was right.’’

Goins also accompanied Jones and other players into the interview room following the victory.

Nitro wound up beating the No. 1 and 2 seeds in the tournament’s final two days — opponents who were a combined 31-0 at the time. The Wildcats erased 14-0 North Marion in the semifinals.