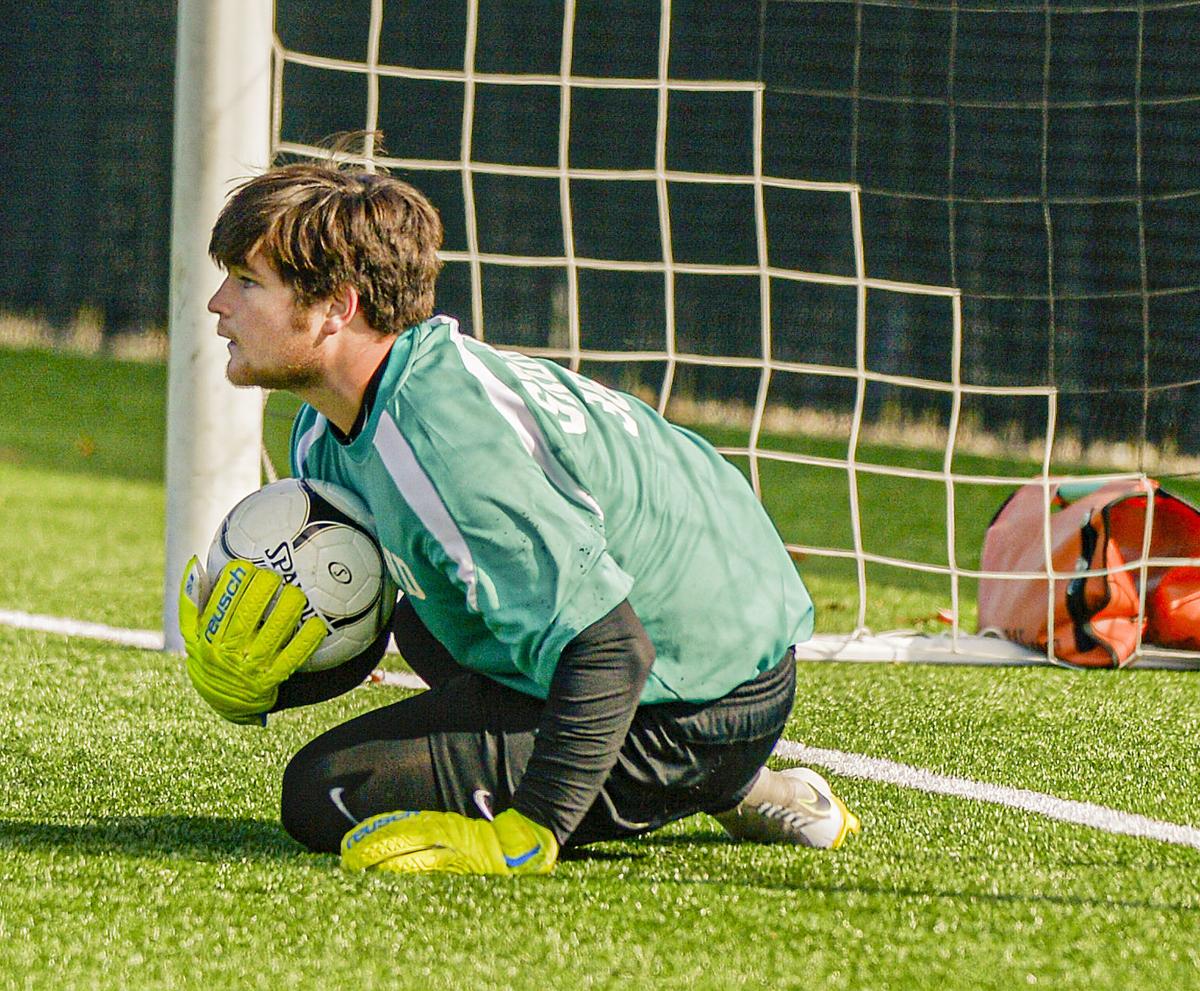 Cabell Midland goalie Cameron Grobe made a save on a penalty kick that help seal Cabell Midland’s victory over University on Friday during AAA state tournament action in Beckley, WV. 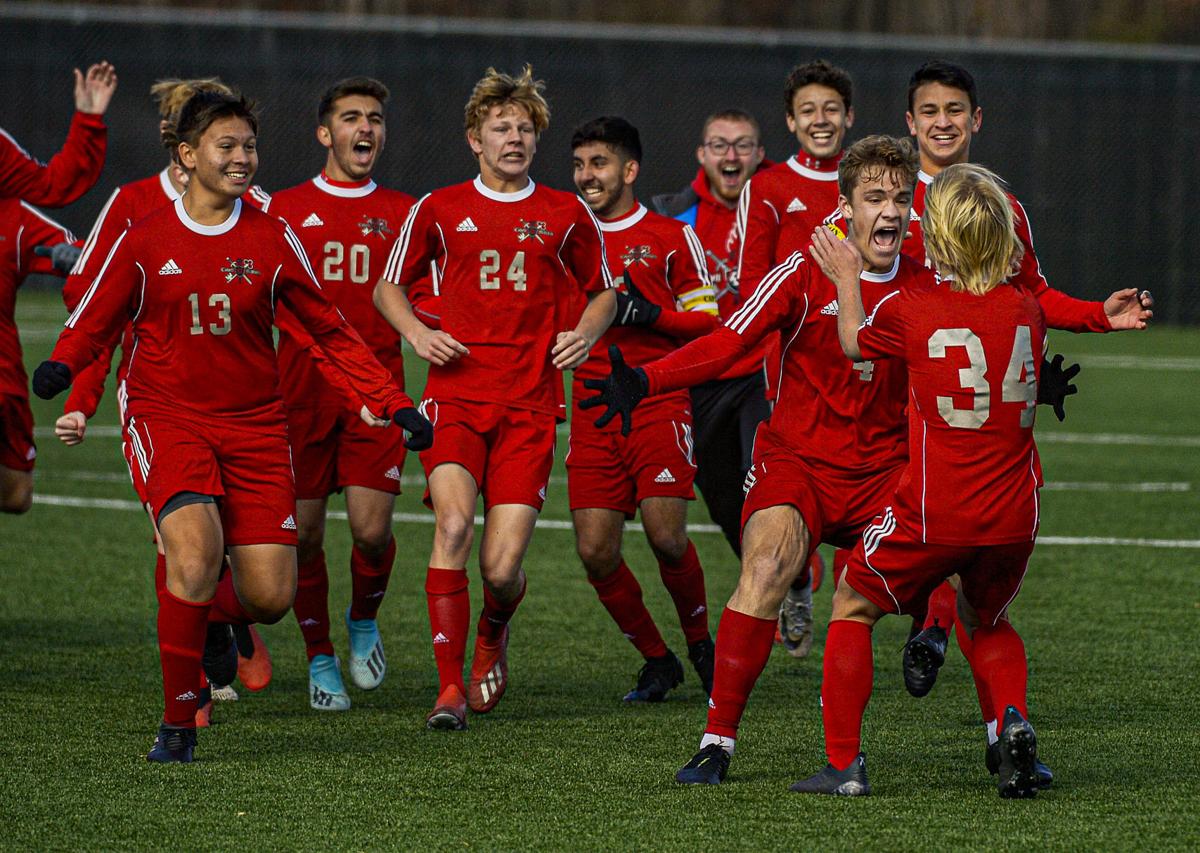 Cabell Midland goalie Cameron Grobe made a save on a penalty kick that help seal Cabell Midland’s victory over University on Friday during AAA state tournament action in Beckley, WV.

BECKLEY — Cabell Midland goalkeeper Cameron Grobe is no stranger to being in the spotlight on Fridays.

Normally, the dual-sport standout is performing duties for the undefeated Knights’ football team on Fridays, but Grobe showed his clutch gene on the soccer pitch on this November day. This Friday effort put his Knights in the Class AAA boys soccer state championship where they will meet George Washington at 10:30 a.m. on Saturday.

Grobe made two saves during penalty kicks to give Cabell Midland a 4-2 win in penalty kicks following a scoreless affair for 120 minutes on the pitch at Paul Cline Memorial Sports Complex.

Grobe said the key for him was to be a calming factor for his team at the match’s penultimate point.

“I’m already confident, and I know my team is confident,” Grobe said. “I’m just trying to settle everyone down and make sure everyone else is okay before we go up there.”

In the game’s biggest moment, Grobe shined brightest. On the first PK, Grobe dived to the post at his left to deny University’s Drew Kemper, putting pressure on the Hawks. His second involved stopping University’s Justin Parsons, who had been the most active offensive player for the Hawks. Grobe dived right and swallowed the shot, which pushed University to the brink.

Garrett Shields then put the stamp on the match when he found net, which sent the Knights flying to Grove in celebration.

It was the end of a match that saw neither side able to convert through regulation and two overtimes, thanks to the play of two keepers — Grobe and University’s Timothy Bailey — who were up to the task when called on. Grobe finished with eight saves and Bailey five.

While no tallies were notched, the action was continuous throughout the 120 minutes on the field as Cabell Midland’s possession-oriented offense kept University (16-6-1) from getting runs and set-pieces, which were a strong point. Cabell Midland coach Brian McNeel said that patience is the key to his team’s success.

“They are a dynamic team when it comes to possessing the ball,” McNeel said. “If we haven’t gotten a goal in 15 minutes, we tell them to calm down and keep playing and keep working as a unit. Every single one of these players plays for each other.”

Cabell Midland (14-4-2) established possession early, pushing the tempo the first 20 minutes but University had the best opportunities of the first half after a pair of Cabell Midland turnovers in their defensive end.

The teams went to intermission scoreless after Grobe came up with a pair of saves in the latter part of the first half to keep the sheet clean.

In the 30th minute, a turnover inside its own 18 led to University’s Justin Parsons getting a clear look at net. However, Grobe sprawled to his left, sending the Hawks’ first shot just over the crossbar. The play seemed to swing momentum as Parsons again took possession off a turnover and fired a low shot on net from 25 yards away that Grobe gobbled up.

Throughout, Parsons and University head coach Michael Smith said they felt as if the Hawks would break through due to their pressure.

“We seemed to take a few minutes to find our footing but I thought for the rest of the first half and portions of the second half, it felt like we were building to something,” Smith said. “Honestly, I thought a goal was coming the way we’ve done all season. You could just feel that it was going to turn in our direction. I’m a little surprised it didn’t.”

The match was the first of the day and took place in frigid conditions with match-start temperatures around 25 degrees.

GEORGE WASHINGTON 3, HEDGESVILLE 0: George Washington senior Zak Abdul-Jalil knew exactly what his team needed to do on Friday afternoon to earn a win in the Class AAA semifinals.

For Abdul-Jalil, it was about starting fast – and he made sure his team executed that brilliantly.

The Patriots were the aggressor from the onset, pressuring Hedgesville at each turn in a 3-0 win in the Class AAA semifinal over the Eagles at Paul Cline Memorial Sports Complex in Beckley.

With the win, George Washington (22-2) moves on to the state championship to face Cabell Midland.

George Washington’s pace and space were vital to their success as they consistently moved through the Hedgesville defense.

The Patriots finished with a 20-4 advantage in shots and played at a different speed than their opposition.

George Washington head coach Erik Engle said it was a product of everyone’s work prior to the season’s start in August.

“They came into this season at mid-season level already and have just grown from there,” Engle said. “They are a fun team to watch.”

While George Washington’s initial goal did not come until the 17th minute – that being a header from Robby Nunley off a cross from Abdul-Jalil – the Patriots executed their plan of setting the tone with their runs.

Nunley scored each of the first two goals for the Patriots with brilliant runs by Abdul-Jalil setting up each, whether directly or indirectly.

The Patriots added the capper when Bryce Coleman made a strong run down the left side and worked the end line before sending a cross to E.J. Davis, who unselfishly found Max Threthewey for a goal to punctuate the match.