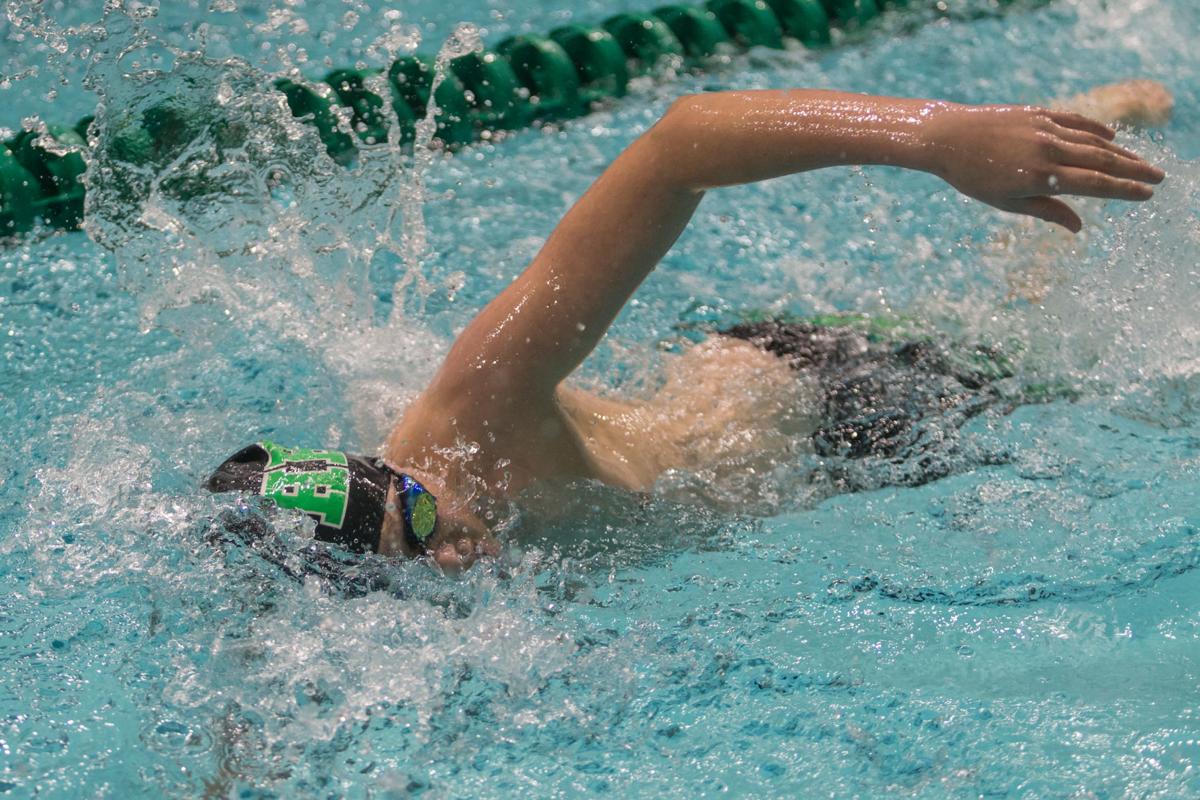 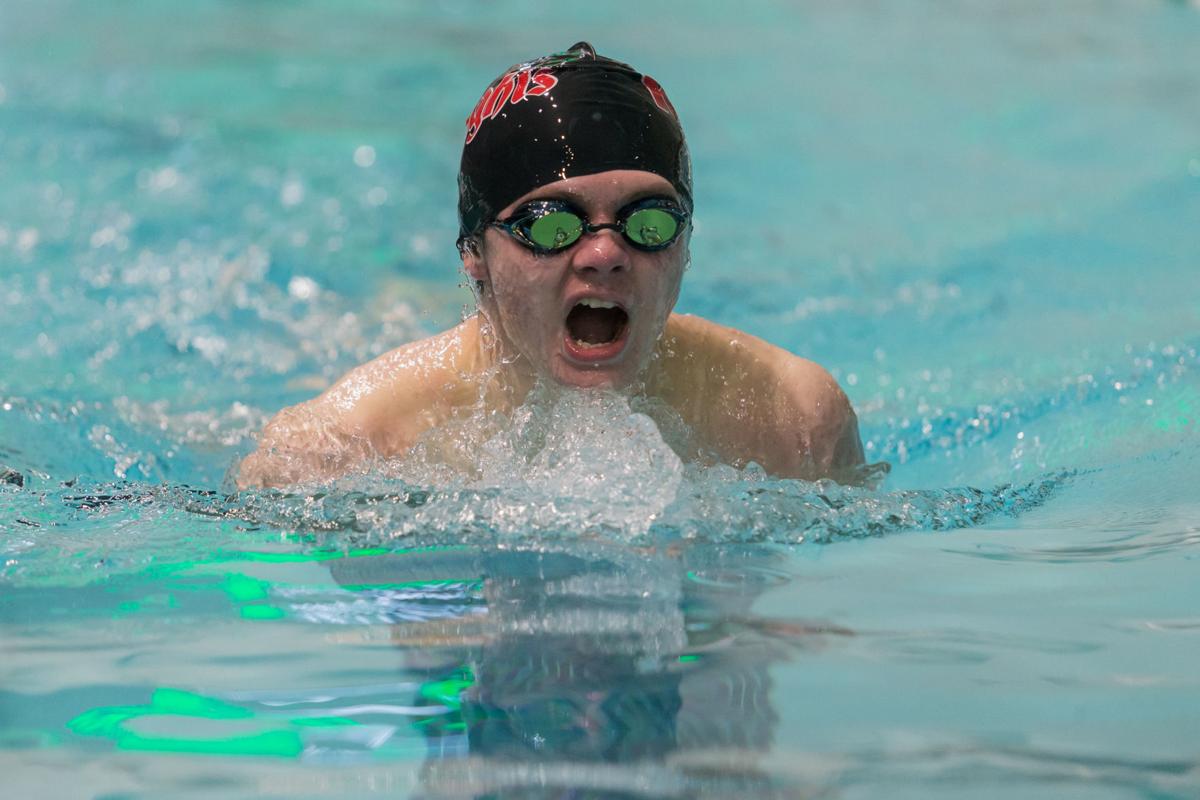 Cabell Midland's Jack McKinney rises above the water for air as he swims a lap during the West Virginia Region IV swim meet on Saturday, February 8, 2020, at the Cam Henderson Center in Huntington. 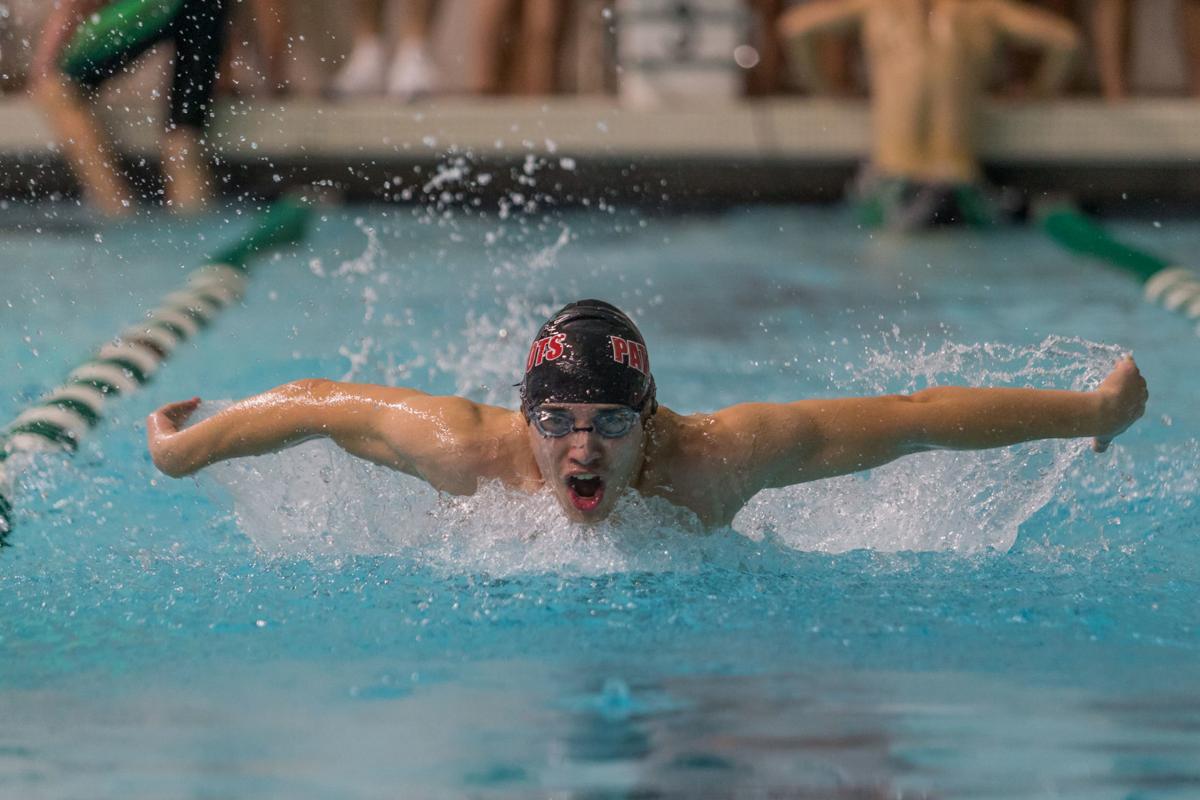 Cabell Midland's Jack McKinney rises above the water for air as he swims a lap during the West Virginia Region IV swim meet on Saturday, February 8, 2020, at the Cam Henderson Center in Huntington.

HUNTINGTON — Huntington High’s boys and Hurricane’s girls were thrilled with second-place finishes Saturday, because no one was catching George Washington.

“I’m really pleased with our team and my individual performances,” Patriots said junior MacKenzie Layne, who won the 100-yard backstroke in 1:01.82 and was part of the meet-record-setting 200-yard medley relay that finished in 1:53.41. “We’ve worked really hard and I’m really excited to get back to states.”

GW’s girls placed sixth in the state last season, while the Patriots boys were second. Both squads figure to contend for titles Feb. 21 and 22 at the West Virginia University Natatorium in Morgantown. The top three individuals and top two relays in each region qualify for the state meet. The 12 other top-performing individuals and 10 relay teams from all regions combined also will qualify.

Adler said he thinks GW’s veteran roster is better than it was last year.

Huntington High coach Emily Akalski said another year of swimming and working out has helped her teams, too, in the last 12 months. She said the boys’ second-place and girls’ third-place finishes were the best in memory, possibly in school history.

“We have a group of seniors who have been phenomenal at getting everyone to work hard and do it,” Akalski said. “Their experience has really made a difference.”

Sophomore Henry Sheils led the Highlanders boys, winning the 50-yard freestyle in 22.77, the 100-yard butterfly in 54.30 and anchoring the winning 200-yard freestyle relay that set a school record of 1:34.95. Cameron Hall, Garrett Cyfers and Isaac Sutherland also swam in that relay.

“We had a really good day,” Sheils said of Huntington High. “I think we can carry this on to the states. This was a really good experience.”

“Oh, yeah,” Sheils said. “The experience we’ve had has helped us grow so much. That’s why we did so well. I know I’m a lot stronger than I was last year.”

Akalski said sophomore Ana Carr “swam really well.” Carr was excited for her team and herself. She dropped five seconds off her best 100-yard butterfly time to finish fourth, and 12 seconds off her 500-yard freestyle time to place eighth. Akalski said that fourth-place finish likely will qualify for Carr for the state meet.

“It’s really exciting,” Carr said. “I don’t know where it’s come from, but this is what we’ve worked for. I’m very optimistic about states. Our relay teams swam well together and I’m very proud of them.”

“I felt pretty confident coming in because I swam well at the (Mountain State Athletic Conference) meet. “It feels pretty good that all the hard work has paid off.”