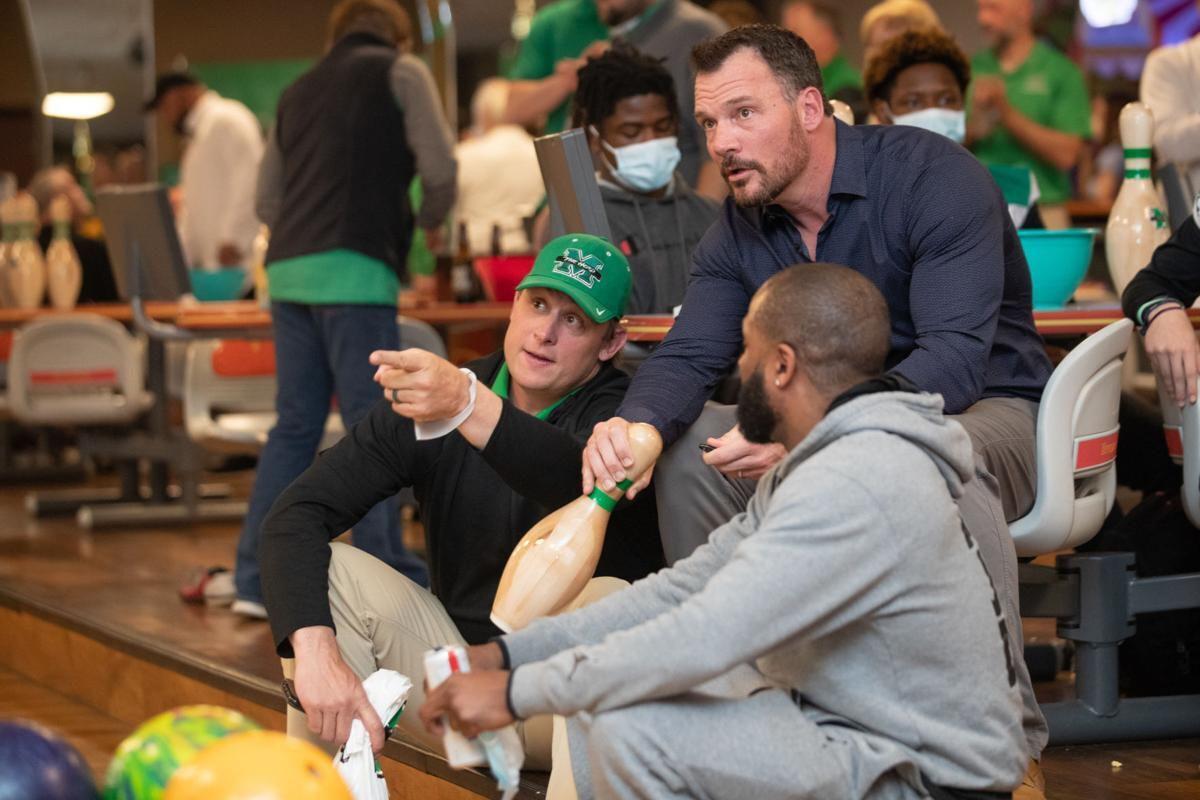 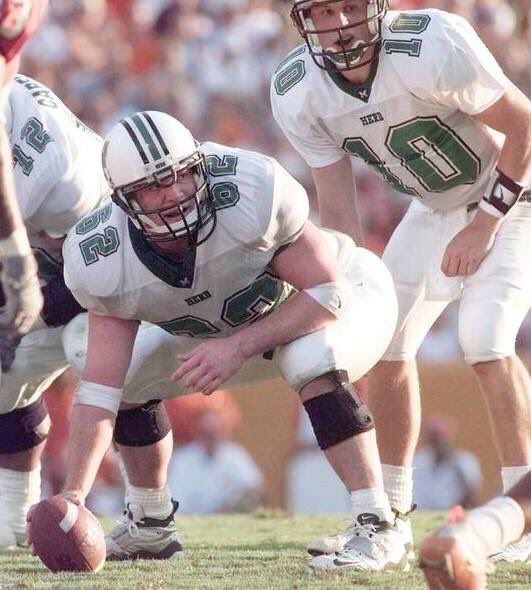 Marshall University center Jason Starkey (62) prepares to snap the football to quarterback Chad Pennington (10) during a game on Sept. 5, 1999, at Clemson. 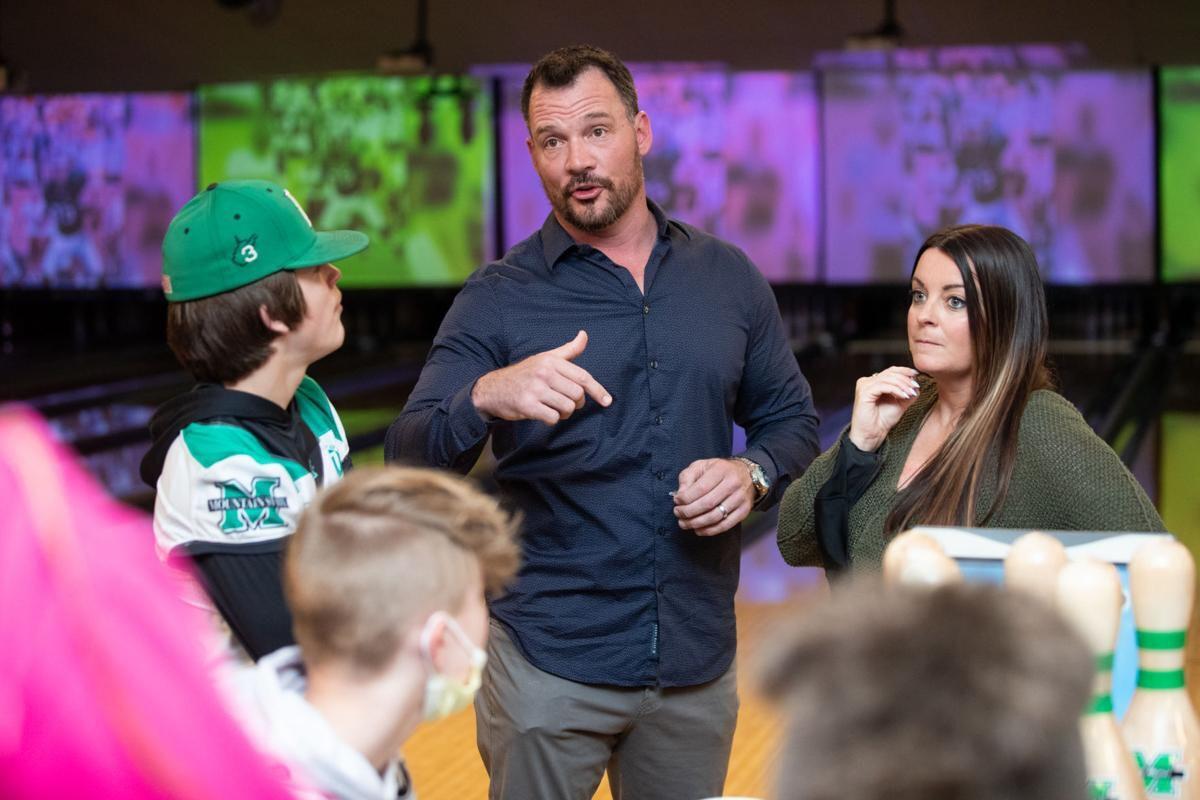 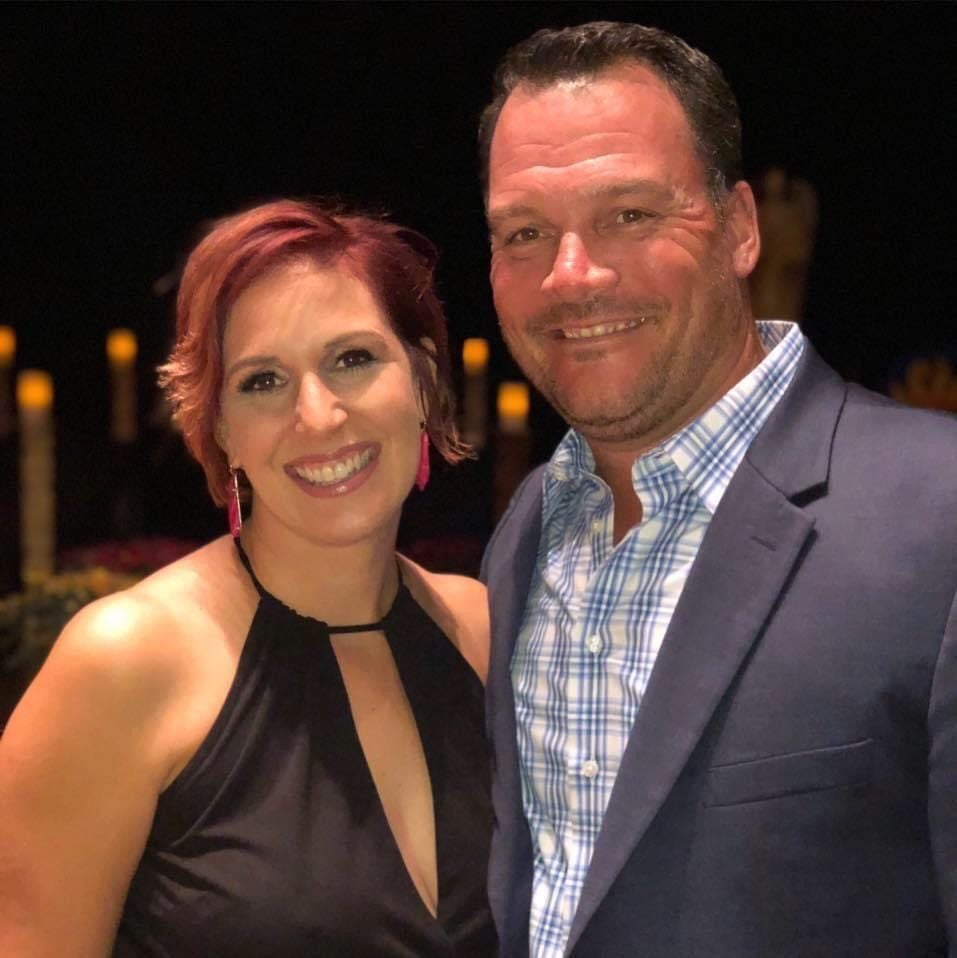 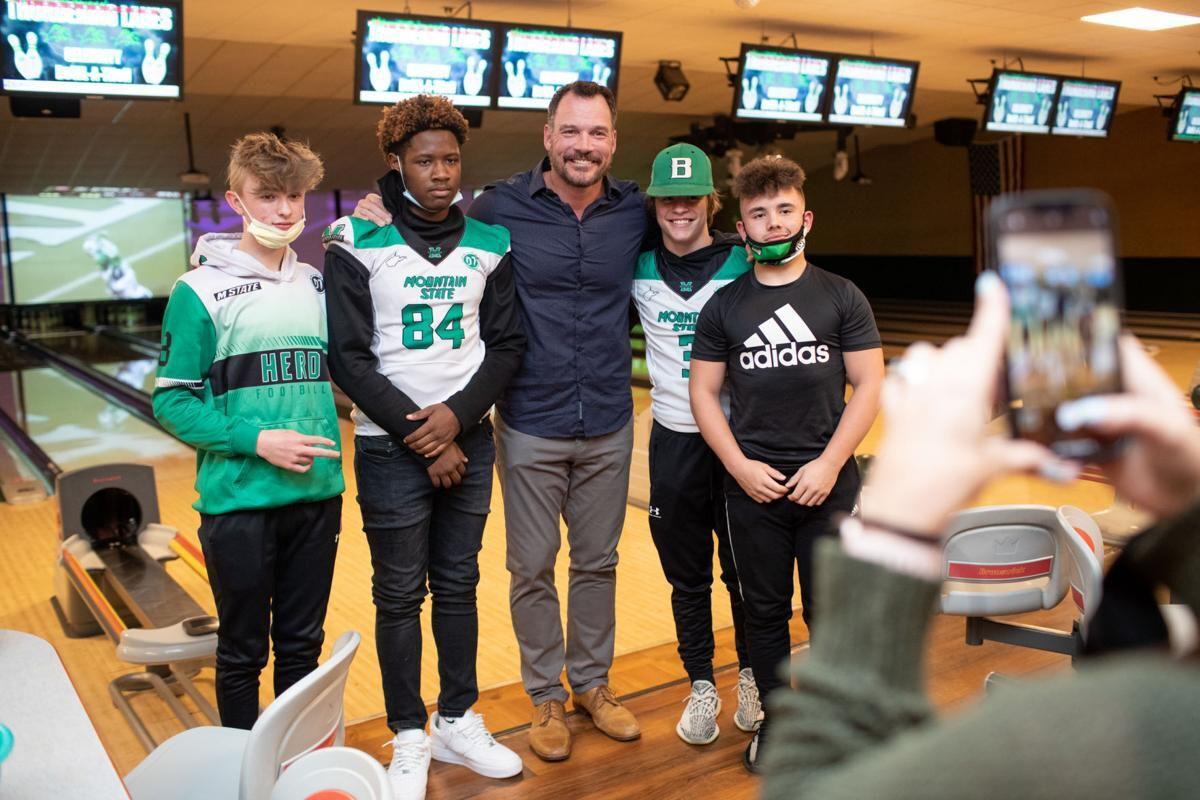 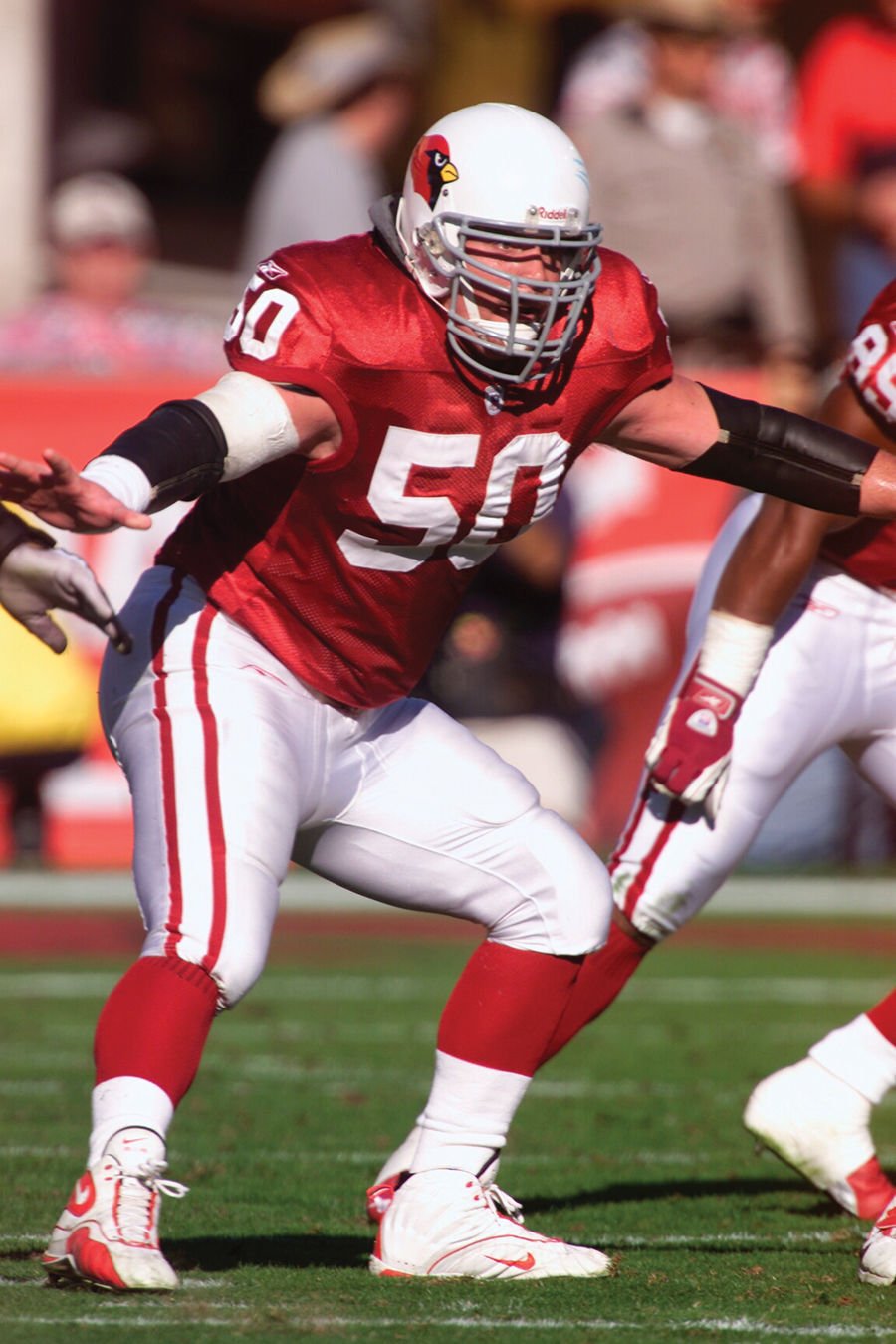 Former Marshall University center Jason Starkey (50) played with the Arizona Cardinals from 2000 through 2003. 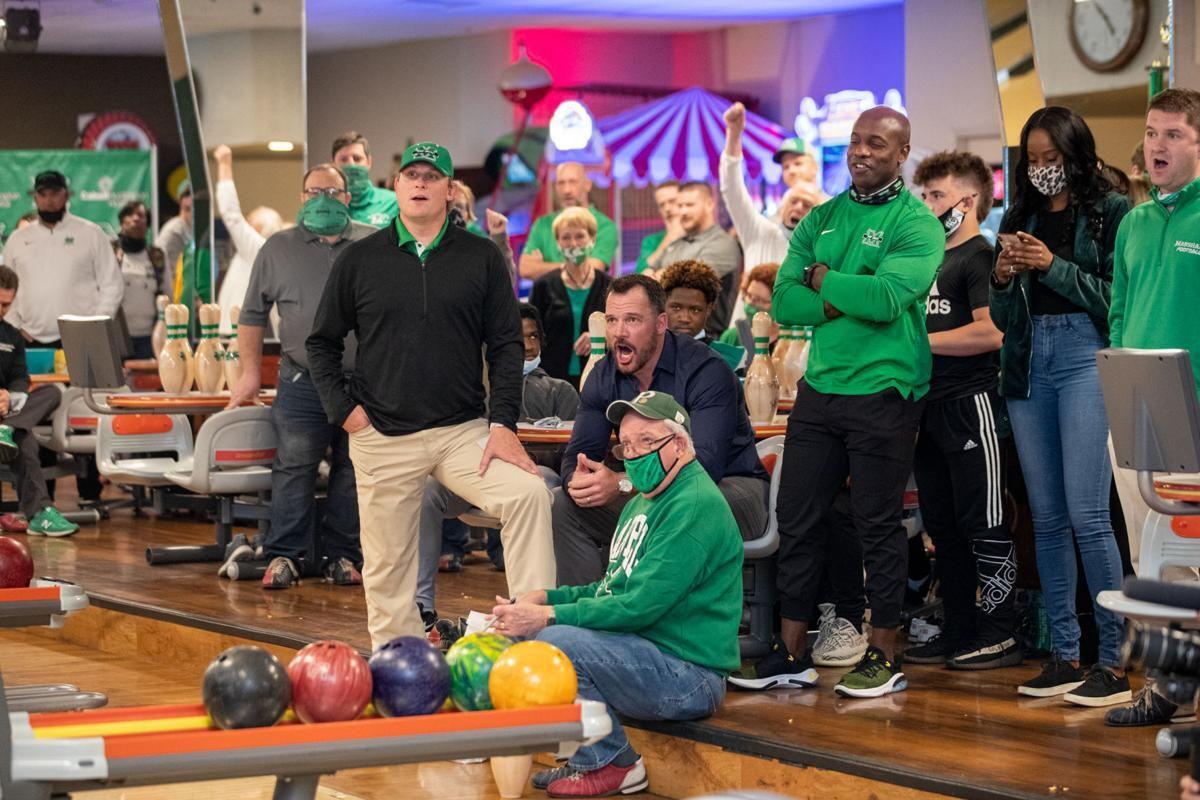 Marshall University center Jason Starkey (62) prepares to snap the football to quarterback Chad Pennington (10) during a game on Sept. 5, 1999, at Clemson.

Former Marshall University center Jason Starkey (50) played with the Arizona Cardinals from 2000 through 2003.

HUNTINGTON — Jason Starkey laughed with longtime friends at the Strike Zone Bowling Center, but he was not the same man they knew during their glory years on the football field at Marshall University.

The man at the Thundering Lanes Bowl-A-Thon on April 16 looked like the guy who in 1999 anchored the offensive line at center on the greatest team in Thundering Herd history. That person, though, is long gone, replaced by a new Creation, as described in 2 Corinthians 5:17, “Therefore, if anyone is in Christ, he is a new creation. The old has passed away; behold, the new has come.”

The former Cabell Midland star who parlayed a stellar college career into four seasons (2000-03) with the NFL’s Arizona Cardinals thought he had everything he wanted — at least until he no longer did. When Starkey was cut and no other team picked him up, all he invested in collapsed. Without the title “football player,” in Starkey’s mind, his identity ceased.

“For me, football and money was my god, my idol,” Starkey, 42, said. “When it was taken from me, I didn’t handle it well. I turned to alcohol and drugs. I had a wife, thank God, who loved me enough to kick me out of our home. I was homeless for weeks, living out of my car.”

Larkie Starkey had had enough. The man she loved was destroying himself and their marriage. He refused to seek help, not even knowing where to begin to get it. Larkie said she had to send a message. If that meant separating, no matter how difficult, so be it.

“A lot of people don’t know that when football was over for me, it was tough, as it is for all of us,” Starkey said. “When you transition out of it, your identity has always been ‘football player,’ when the transition part happens, it’s tough. Some are better equipped to handle it than others. I, unfortunately, was one of the ones not ready to handle it.”

Larkie said she couldn’t live with her husband any longer, but deeply loved him enough to reach out on his behalf. She called Starkey’s former Marshall teammate and friend, then-New York Jets quarterback Chad Pennington.

“Chad was going into his eighth training camp with the Jets and my wife got on the phone with him and he cared enough to do something about it,” Starkey said.

Pennington contacted Shaun Saunders, a former teammate and Starkey’s backup with the Herd. Saunders, the best man in Starkey’s wedding, flew to Arizona to get him. Starkey asked Saunders where they were going.

“We have a plane ride,” Saunders remembered saying. “That’s all I’m going to tell you.”

Starkey trusted Saunders enough to board a flight that touched down in Knoxville, Tennessee, 40 miles from Pennington’s home in LaFollette, Tennessee. Saunders checked Starkey into a rehabilitation center there. Seven months later, Starkey emerged sober.

While a great change took place in Starkey inside the facility, an even more massive change occurred outside it after the first 30 days of inpatient care. Pennington’s father, the late Elwood Pennington, gave Starkey odd jobs to perform for him and wife Denise. Tasks ranged from cleaning out gutters to working on boats at a marina. Elwood Pennington didn’t need Starkey for those jobs, but used them as an opportunity to talk with him.

“All the time, he’s talking about the Lord, not necessarily pushing Him on me, but talking about what He’s done in his life,” Starkey said of Elwood Pennington. “He talked about how He had restored and redeemed him, how he wasn’t always the guy that I knew. That once upon a time he made bad choices, too. He basically loved me until I learned how to love myself.”

Elwood Pennington’s words were stronger than any drug or drink Starkey had consumed.

“As a result of that, I gave my life to Christ on the dirty floors of a treatment facility in Knoxville, Tennessee, and I never turned back,” Starkey said. “I miss Coach P like crazy and I try to honor him for what he did bringing me to Christ by doing my best for Christ in every relationship I have and in every opportunity I have to do it.”

Starkey now builds houses in South Texas, where he has lived for three years after coaching football at Lopez High School in Brownsville, Texas, for seven seasons, five as head coach. He volunteers with his son Reid’s St. Joseph’s Academy football team “so I get to scratch the itch a little bit.”

Football, though, no longer is Starkey’s god. Now, he worships Jesus Christ.

“I’m all in,” Starkey said. “It starts here at Marshall with the relationships we forged at this great university, and the success we experienced.”

Starkey’s voice then halted and his eyes filled with tears.

Pennington declined to take credit, deflecting it to his dad, to Saunders, to those at the treatment facility and, foremost, to God. The 1999 Heisman Trophy finalist smiled as he watched Starkey interact with fans and former teammates.

“It all started here where relationships were so meaningful that they went beyond the sport, they went beyond the game,” Starkey said. “When I talk to teams, I tell them they have an opportunity not only to succeed in sports, but in life because down the road you never know that someone who you connect with will come back and benefit you later.”

Starkey said no one knows what the future holds, but he knows Who holds his future. He encouraged others to allow Christ to change them.

“I never dreamed of being an alcoholic or someone in recovery,” Starkey said. “Now, I’ve been sober 15 years and have a life I never could have dreamed of. That wife who kicked me out of the house, we’ve been married for 18 years. She’d probably say ‘Happily for 14.’”

Starkey, Larkie, Reid and daughter Kendall live happily, now, something at one time appeared unlikely at best. Starkey said he’s amazed at how connections led to his turnaround.

“It’s a generational curse that has been broken for me,” Starkey said of overcoming addiction. “Now, I have kids who have never seen me drunk or high. They know I’d die for my wife. They see me honor family, and I thank God for that. I thank the people who stood up and did what God was telling them. Guys we sweated and bled together. We won a lot of ballgames, but we’re winning at life now.”

He quoted Proverbs 27:17 — “As iron sharpens iron, so one man sharpens another” — in assessing his transformation.