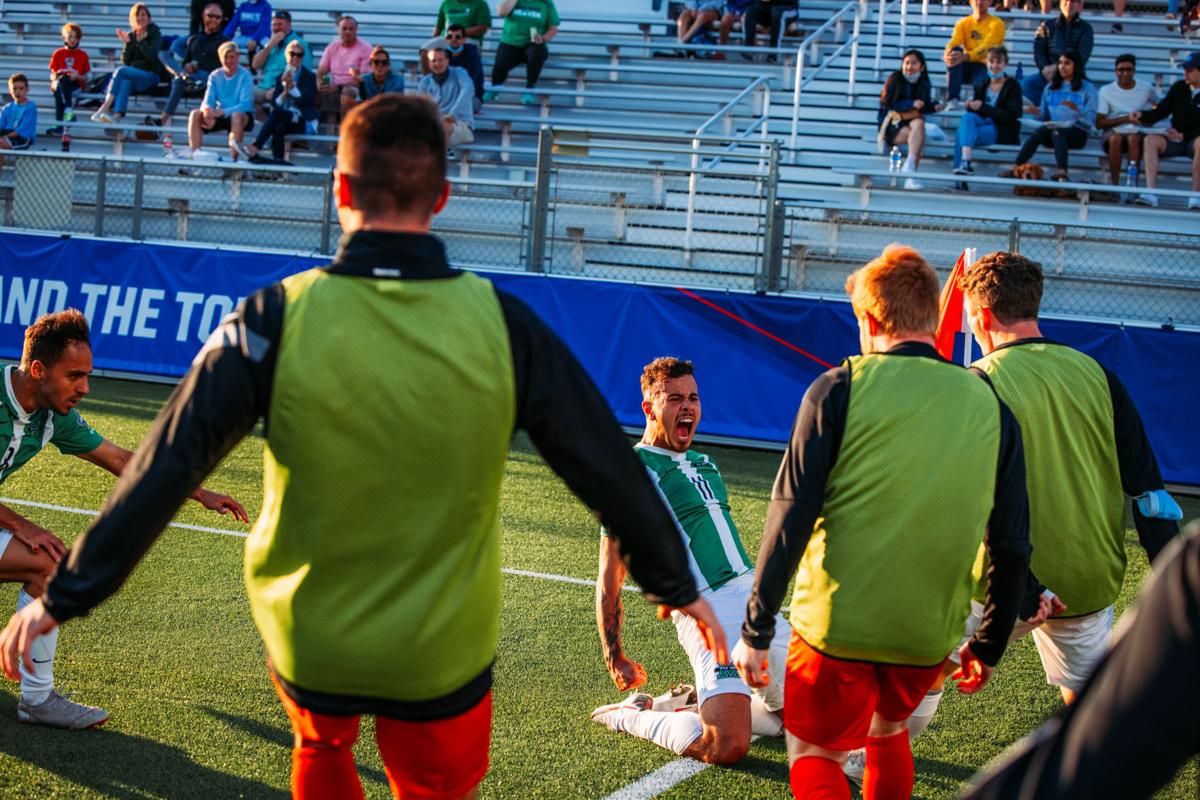 Marshall's Jamil Roberts celebrates after scoring a goal during an NCAA men's soccer national championship tournament semifinal game against North Carolina on Friday, May 14, 2021, at Sahlen’s Stadium in Cary, N.C. 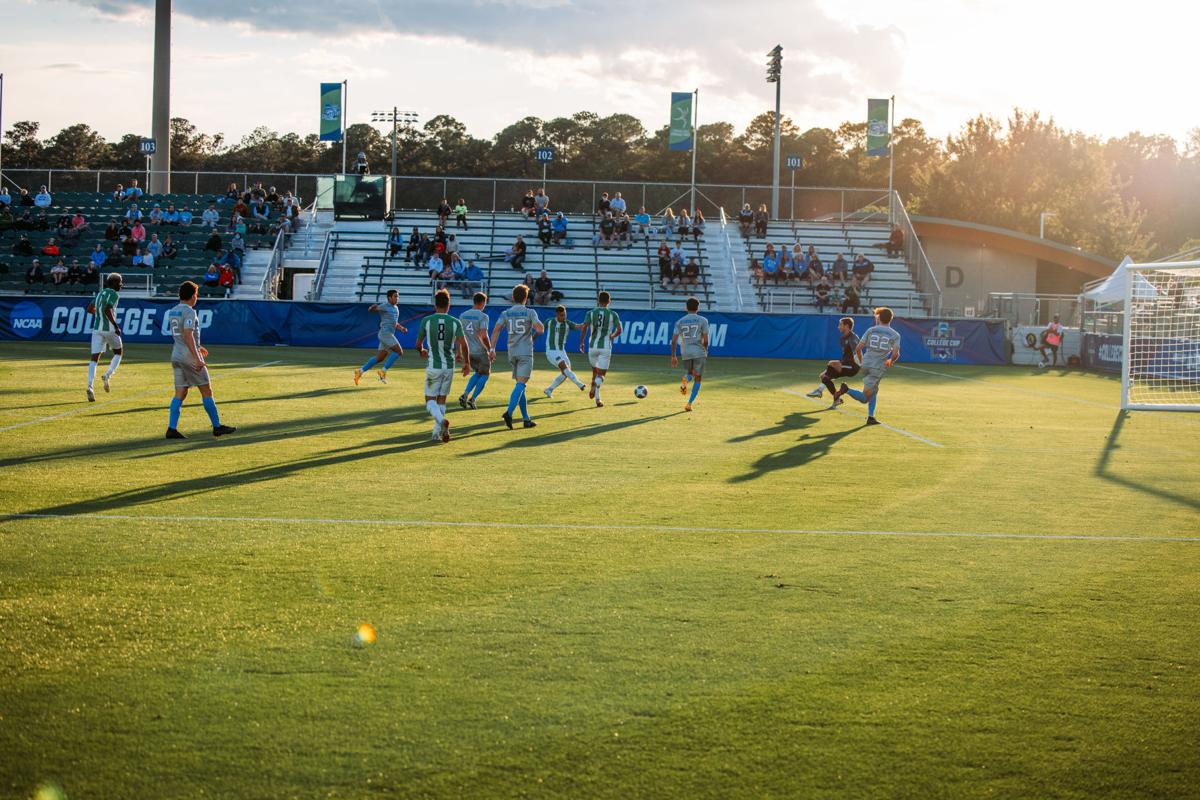 Marshall's Jamil Roberts (11) kicks a shot that went in for a goal during an NCAA men's soccer national championship tournament semifinal game against North Carolina on Friday, May 14, 2021, at Sahlen’s Stadium in Cary, N.C. 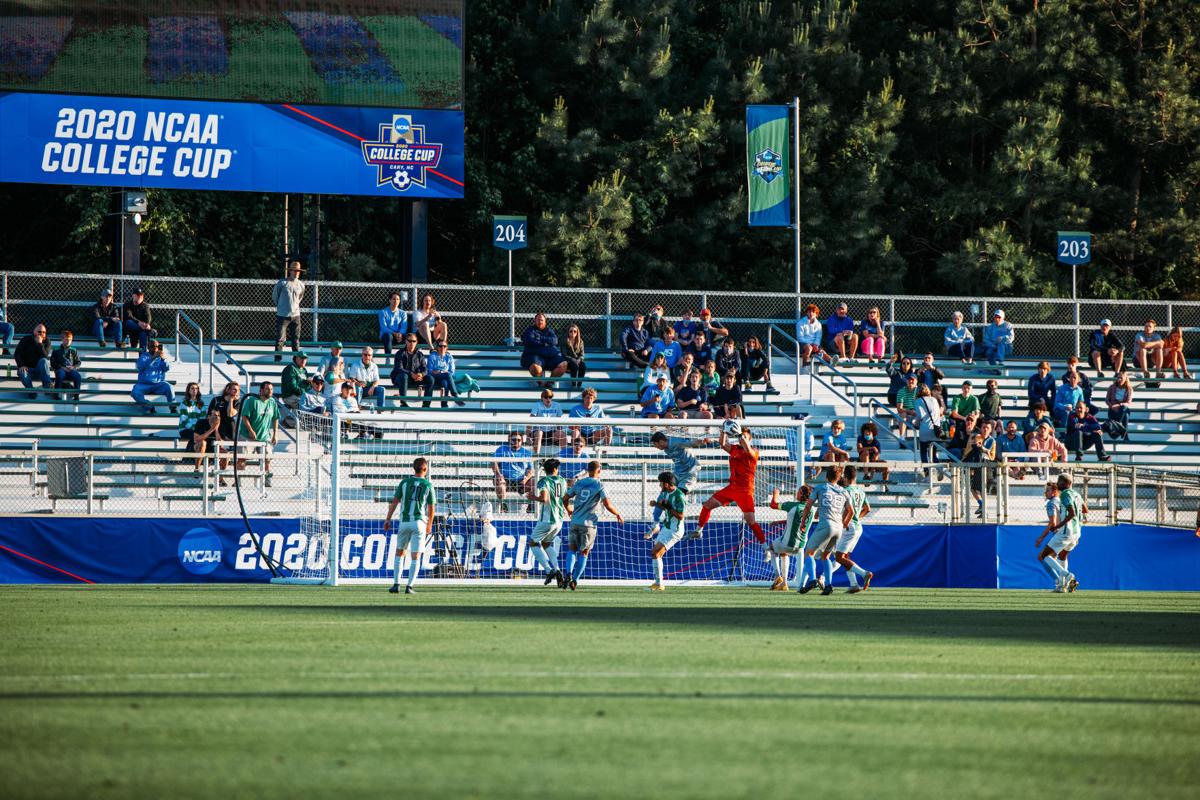 Marshall's Jamil Roberts celebrates after scoring a goal during an NCAA men's soccer national championship tournament semifinal game against North Carolina on Friday, May 14, 2021, at Sahlen’s Stadium in Cary, N.C.

Marshall's Jamil Roberts (11) kicks a shot that went in for a goal during an NCAA men's soccer national championship tournament semifinal game against North Carolina on Friday, May 14, 2021, at Sahlen’s Stadium in Cary, N.C.

CARY, N.C. — The Marshall men’s soccer team has earned its shot at the national championship.

And it only took one shot to do it.

After wearing North Carolina down with its traditional possession style, the Thundering Herd cashed in its only scoring chance of the game Friday, getting a goal from Jamil Roberts in the 60th minute to beat the Tar Heels 1-0 at Sahlen’s Stadium.

The victory is Marshall’s fourth straight since coming to North Carolina for the NCAA Tournament and sends coach Chris Grassie’s team into Monday’s College Cup final against Indiana, which beat Pittsburgh 1-0 in the late game Friday, with a chance at the winning school’s first national title.

“It only takes one more goal than the opposition to win a game,” said Roberts of the 11-1 shot difference on the final score sheet. “If it takes one shot, then we’ll take it.”

Although the disparity in offensive opportunities was greater than the Herd would have liked, it wasn’t completely an accident.

Marshall (12-2-3) spent most of the first half and the opening 10 minutes of the second essentially playing keepaway from the Tar Heels in their back end.

The defensive posture was based on the philosophy, as Grassie explained afterward, that “there’s only one ball, and if we’ve got it, they can’t score.”

It also didn’t hurt that the Herd had keeper Oliver Semmle protecting its net.

The junior from Germany was credited with five saves and was challenged often, especially early by a UNC attack that was awarded several dangerous free kicks as a result of 19 Marshall fouls.

Semmle also got some help from a friendly crossbar on a rising shot by the Tar Heels’ Giovanni Montesdeoca just after Roberts’ goal.

“They had a lot of half chances and little things around the box, but we knew that we would break them entirely at one point because they’d been running and running and running,” Grassie said. “And it happened once with Jamil getting in, and there were three of four more occasions where we were one pass away from a clear shot on goal. It wasn’t our greatest penetrating performance, but the guys trust each other playing our style.”

The strategy paid off with just over 30 minutes remaining.

Forward Milo Yosef, who scored Marshall’s two goals in its opening-round win against Fordham, started the play by taking a pass from back Collin Mocyunas and making a run into the box on right wing.

His pass to well-marked teammate Vitor Dias didn’t connect, but the Herd’s Hermann Trophy semifinalist got enough of the ball to flick it through to Roberts, who — just as he did in scoring the only goal of Marshall’s Elite Eight win against Georgetown — didn’t miss when presented with an unguarded net.

“It was just a miscue pass, but Vitor has been doing that all season, that magic in and around the box,” Roberts said of the pass that led to his fourth goal of the year. “He flicked it around the corner to me and it was up to me to finish it. Happily, I did.”

Although the Herd appeared to get a shot off late in the first half on a long-distance effort by midfielder Gabriel Alves in transition, Roberts’ goal was the only official attempt listed on the final score sheet.

The only number that mattered, though, was the one on the scoreboard.

And for a few nervous moments, it appeared as though UNC (9-5-4) might have put up a one of its own.

It happened in the 87th minute on a cross that went past the goal and over the end line as a player from both teams battled for it. The ball ended up on the foot of Tar Heel forward Jonathan Jimenez, who put it in the net to set off a celebration among his teammates and the UNC fans in the stands.

But by that time, referee Nikola Aleksic had ruled the ball out of bounds and disallowed the goal.

“When the ball was over the crossbar, it was like this much out,” Semmle said, holding his hands about 2 feet apart. “For me, I was sure it was out for a goal kick.”

UNC had several more chances over the final few minutes as it pushed forward in hopes of getting an equalizer. But as it has the entire tournament, Marshall’s defense stifled the attack with disciplined play and crisp passing.

Because they did, the Herd is heading to the national final where it will attempt to become the first unseeded team to win the championship since Santa Clara in 2006.

While everyone else might consider this a Cinderella run, it’s anything but a surprise for Grassie and his players.

It’s a goal that’s now just one more win away. No matter how many shots it takes.