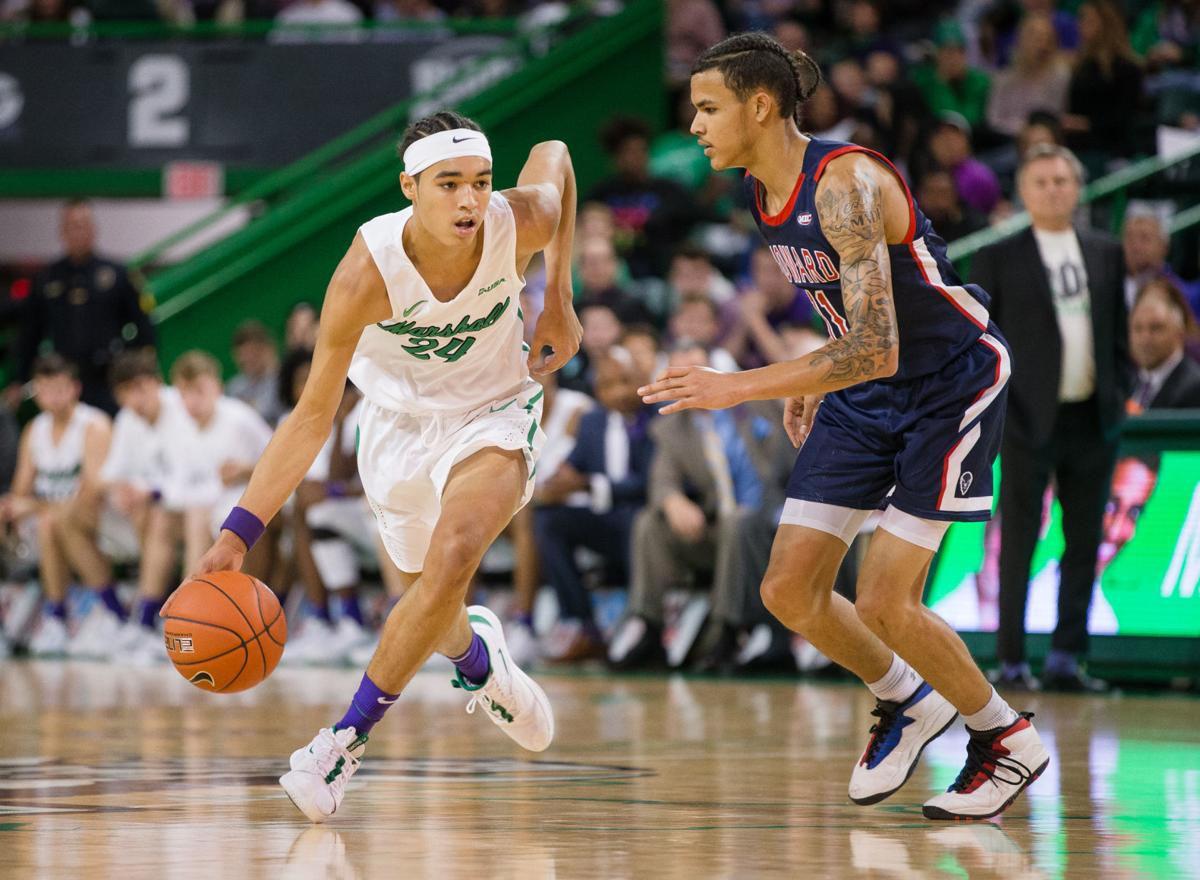 Marshall's Cam Brooks-Harris (24) pushes up the court against Howard's Kyle Foster (11) during a NCAA men’s basketball game on Thursday, Nov. 21, 2019, at the Cam Henderson Center in Huntington. 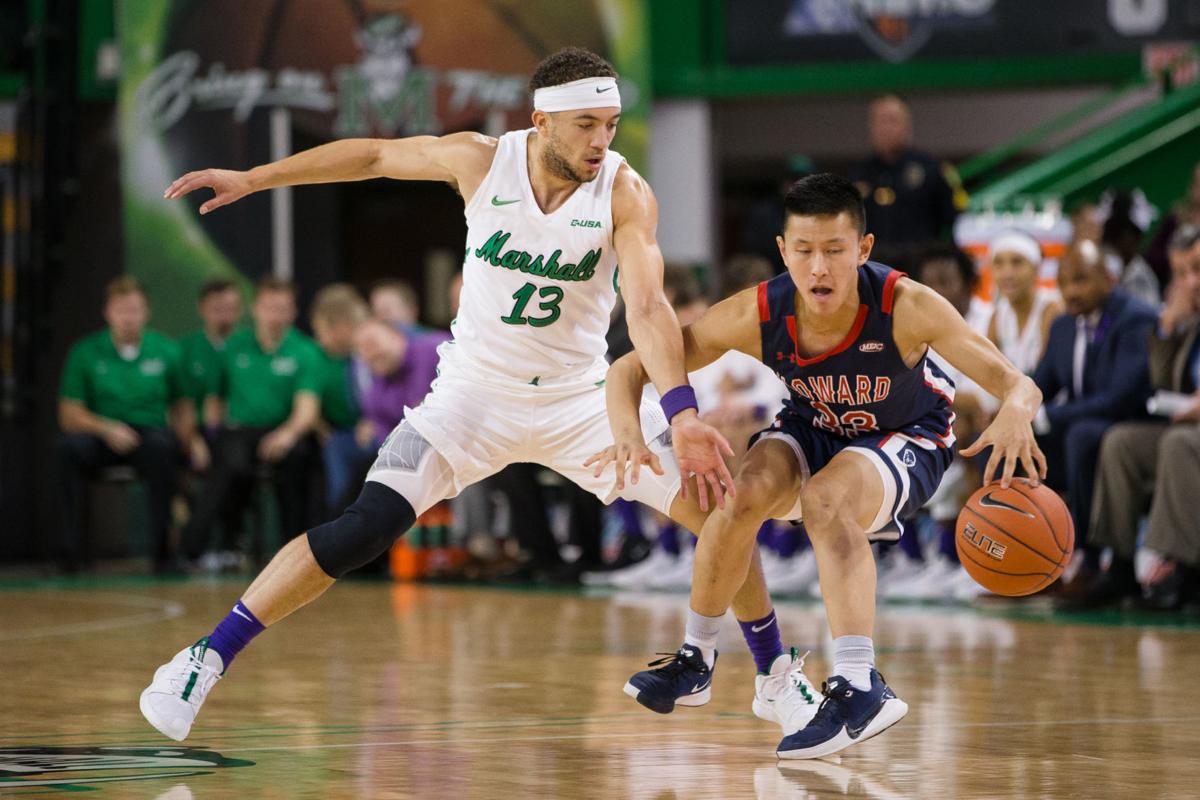 Marshall's Jarrod West (13) attempts to steal the ball from Howard's Ian Lee (33) during a NCAA men’s basketball game on Thursday, Nov. 21, 2019, at the Cam Henderson Center in Huntington.

Marshall's Cam Brooks-Harris (24) pushes up the court against Howard's Kyle Foster (11) during a NCAA men’s basketball game on Thursday, Nov. 21, 2019, at the Cam Henderson Center in Huntington.

Marshall's Jarrod West (13) attempts to steal the ball from Howard's Ian Lee (33) during a NCAA men’s basketball game on Thursday, Nov. 21, 2019, at the Cam Henderson Center in Huntington.

Marshall traveled to Gainesville, Florida, in anticipation of Friday’s 9 p.m. contest against No. 24 Florida, which will be shown on SEC Network from Exactech Arena at Stephen O’Connell Center.

It is another chance for the Herd to improve itself, according to Marshall head coach Dan D’Antoni.

D’Antoni knows it is a tall task against the Gators, who got back into the national polls after winning the Charleston Classic last week.

For D’Antoni, there is a big difference in playing with pace and rushing.

Over the first four games, Marshall (2-3) was rushing things, which led to the turnover and shooting issues that D’Antoni alluded to.

In last week’s win over Howard, the team played with pace, but was also patient to not force the issue, opting for the easy plays and passes that led to high-percentage shots.

Marshall forward Jannson Williams said the credit for calming the team down went solely to D’Antoni.

Williams admitted that the early struggles had players pressing a bit in an attempt to make the perfect play instead of letting the game come to them, as had been the case during the team’s recent success.

“He’s the most patient one out here,” Williams said. “It’s definitely hard to be patient and we weren’t patient at all, until Dan stepped into the room. His offense works. We know that. We’ve just got to be patient and get the flow of everything, but I’ll give him the credit. He calmed us down a little bit.”

One player that exemplified playing with patience and pace against Howard was Marshall’s Taevion Kinsey, who finished with 14 points, 14 assists and seven rebounds. Kinsey’s points came on 7-of-8 shooting and his 14 assists came with only one turnover attached, as well.

D’Antoni said there was no surprise in seeing Kinsey’s statistics from that game, given his ability, but his next step is elevating his game against elite competition, which he will face on Friday night.

“He made big plays, but the competition wasn’t as steep,” D’Antoni said. “He’s got to take that into Florida and play that same game at Toledo and wherever we’re playing. It’s a challenge for him.”

Kinsey said the team’s all-around performance against Howard was a boost heading to Florida.

“I think it gives us confidence going into that game because we got guys in sync,” Kinsey said. “Every game, you have to go into it with confidence.”

The Herd will take on a Florida team who has found their stride after a slow start to the season.

Florida (5-2) has won three straight games, including a 70-65 win over No. 18 Xavier in the Charleston Classic championship game.

Many experts have Florida pegged as a team to contend for an SEC title and potentially make the Final Four, given the talent the roster possesses.

Last week, forward Keyontae Johnson earned SEC Player of the Week honors and the Charleston Classic MVP honors, as well, after averaging 16.3 points and eight rebounds in the three games.

The Gators feature a long lineup with offensive balance. All starters averaging more than eight points per game.

In addition to Johnson, Florida features big man Kerry Blackshear, who is averaging a team-best 13.3 points and 9.6 rebounds per game.

Blackshear will be a big test inside for Marshall’s combination of Iran Bennett and Goran Miladinovic.

While the Herd players know the test is large, Kinsey said the team is looking to rise to the challenge, much like they did in the tight loss to Notre Dame.

“To me, that’s a target,” Kinsey said of Florida. “We’re aiming to be one of these big teams that we’ve been playing — like a Notre Dame. We are definitely going to Florida to compete.”