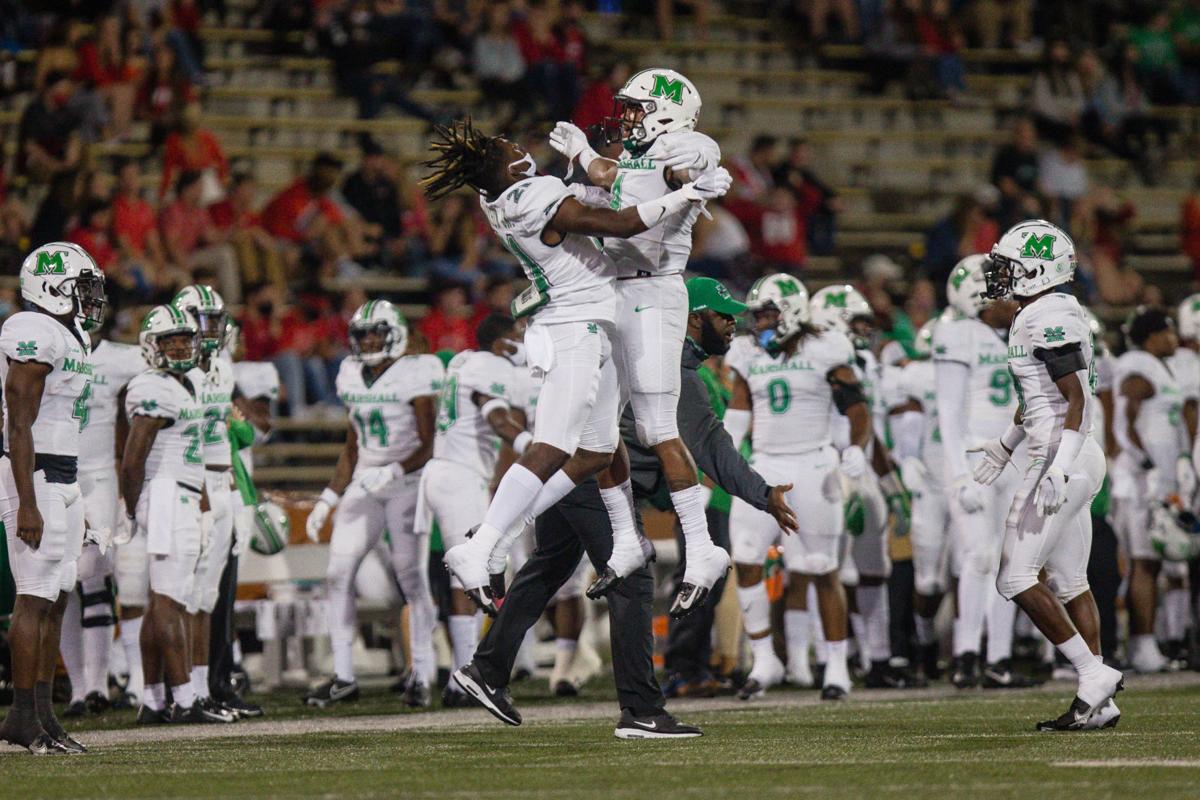 Marshall linebacker Tavante Beckett (4) and E.J. Jackson (21) celebrate after stopping Western Kentucky on third down during an NCAA football game on Saturday at Houchens-Smith Stadium in Bowling Green, Ky. 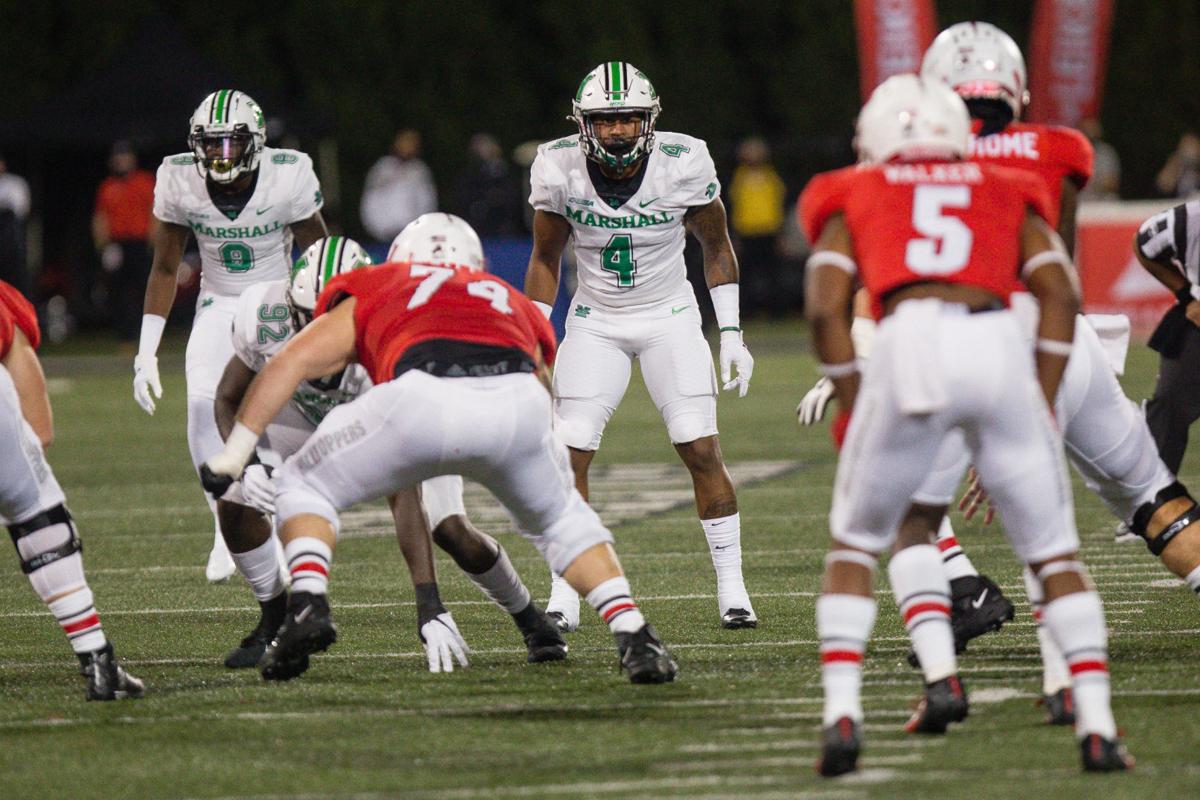 Sholten Singer | The Herald-Dispatch Marshall linebacker Tavante Beckett (4) follows the snap as the Herd takes on Western Kentucky during an NCAA football game on Saturday, Oct. 10, 2020, at Houchens-Smith Stadium in Bowling Green, Ky. 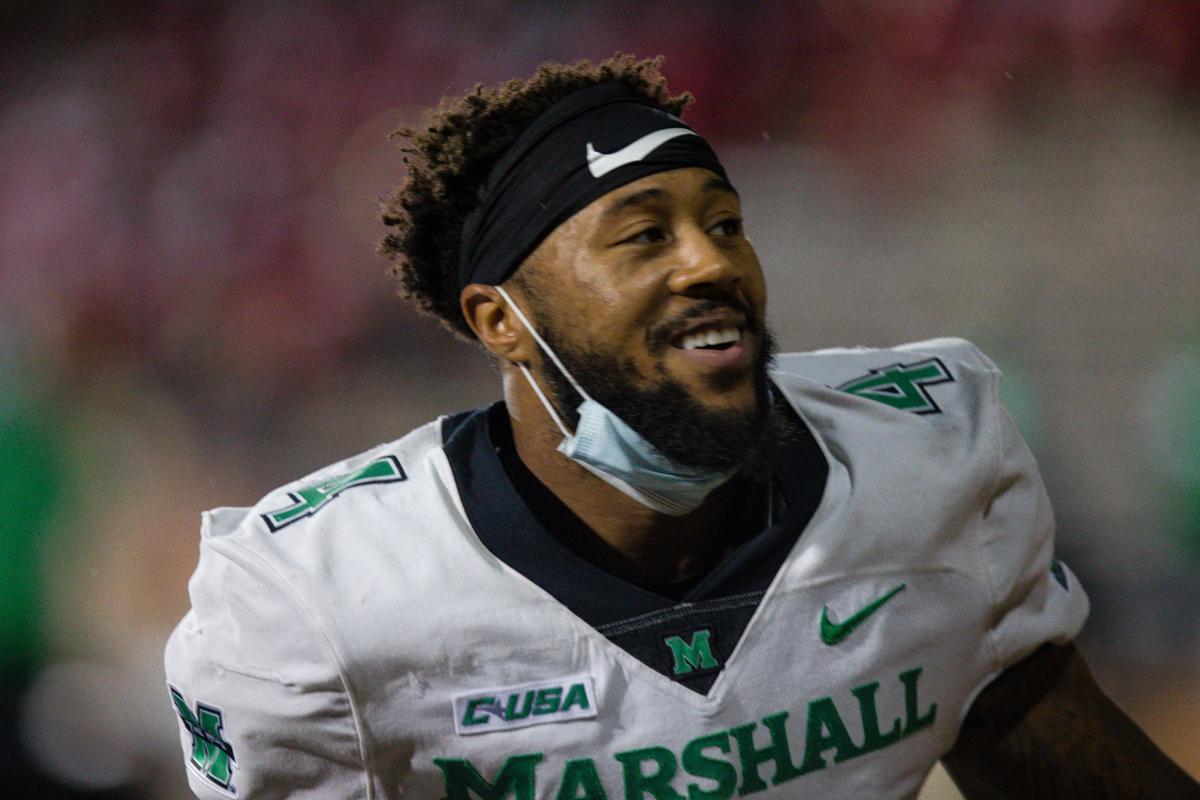 Sholten Singer | The Herald-Dispatch Marshall linebacker Tavante Beckett is all smiles as the Herd defeats Western Kentucky during an NCAA football game on Saturday, Oct. 10, 2020, at Houchens-Smith Stadium in Bowling Green, Ky.

Marshall linebacker Tavante Beckett (4) and E.J. Jackson (21) celebrate after stopping Western Kentucky on third down during an NCAA football game on Saturday at Houchens-Smith Stadium in Bowling Green, Ky.

Sholten Singer | The Herald-Dispatch Marshall linebacker Tavante Beckett (4) follows the snap as the Herd takes on Western Kentucky during an NCAA football game on Saturday, Oct. 10, 2020, at Houchens-Smith Stadium in Bowling Green, Ky.

Sholten Singer | The Herald-Dispatch Marshall linebacker Tavante Beckett is all smiles as the Herd defeats Western Kentucky during an NCAA football game on Saturday, Oct. 10, 2020, at Houchens-Smith Stadium in Bowling Green, Ky.

HUNTINGTON — For every defender, there is the dream of getting the chance to score in a football game. As Marshall linebacker Tavante Beckett pointed out, though, there is also a nightmare that many defenders worry about, too.

Beckett came face-to-face with his dream — and his potential nightmare — on Saturday night against Western Kentucky.

As Beckett came free into the WKU backfield, he saw the ball in front of him laying on the turf. The Herd’s senior linebacker sprinted through, scooping up the football and racing toward the end zone. There was only one thing on his mind.

It was the nightmare — not the dream.

“Make sure I get into the end zone with the ball and not drop the ball beforehand,” Beckett said after the game. “That’s something I’ve always had nightmares about, so I finally got past that one.”

Getting past the nightmare allowed Beckett to realize his dream of scoring a touchdown in a collegiate game. His 38-yard fumble return increased Marshall’s lead to 35-0 early in the third quarter and put the stamp on what was an impressive victory for the Herd in its Conference USA opener.

The fumble recovery was one of three Beckett had on the evening, which tied him with two other Marshall players for the most in history.

It also earned him Conference USA Defensive Player of the Week honors, which were announced on Monday.

Beckett said the third fumble recovery was a gift from God after he felt like he had squandered a chance earlier on one of his previous recoveries in the first half.

“It was my third fumble recovery, so I wasn’t going to fall on it,” Beckett said. “I was thinking ‘take it to the house.’ I felt like I could’ve took one of them to the house before, so the third one was God just putting the ball in my face. It was up to me to go do it.”

The interesting thing about the game is that Beckett wasn’t necessarily pleased with his performance on Saturday. Coming into Saturday, Beckett led Marshall with 24 tackles in two games, which included a 16-tackle performance against No. 23 App State that led to national player of the week awards.

On Saturday, Beckett ended up with more fumble recoveries (three) than tackles (two), but his presence and awareness around the football still allowed him to be a playmaker for the Herd defense.

Regardless of whether forcing or securing turnovers or making tackles, Beckett has proven to have a nose for the football in 2020. In addition to his 26 tackles on the season, Beckett has accounted in four of Marshall’s six turnovers forced, including all four fumbles that have changed possession (three recoveries, one forced fumble).

Beckett said the credit for his ability to make plays goes to the defensive staff, which has put him in a position to be successful within the scheme.

“Credit Coach (Brad) Lambert,” Beckett said. “I know whatever the call is, he’s going to put me in the position to win. I trust him a lot and I’ll never question his calls.”

In just 16 career games with the Herd, Beckett has accounted for five fumble recoveries and three forced fumbles, making him a force for the opposition to account for each week. Beckett is the central force behind a defense that is tied for the national lead in points allowed per game (7.0).

That defense had three weeks between games, and Beckett said after the App State victory, the Herd defense was eager to once again show that they could be one of the best in college football.

“Getting back out there just meant a lot,” Beckett said. “You could tell how hungry we were.”

Marshall gets another chance to make its mark on Saturday as the Herd hits the road for the second time in as many weeks, traveling to Ruston, Louisiana, to take on Louisiana Tech in a 6 p.m. matchup.

How do you feel about the way the West Virginia high school football playoffs ended?