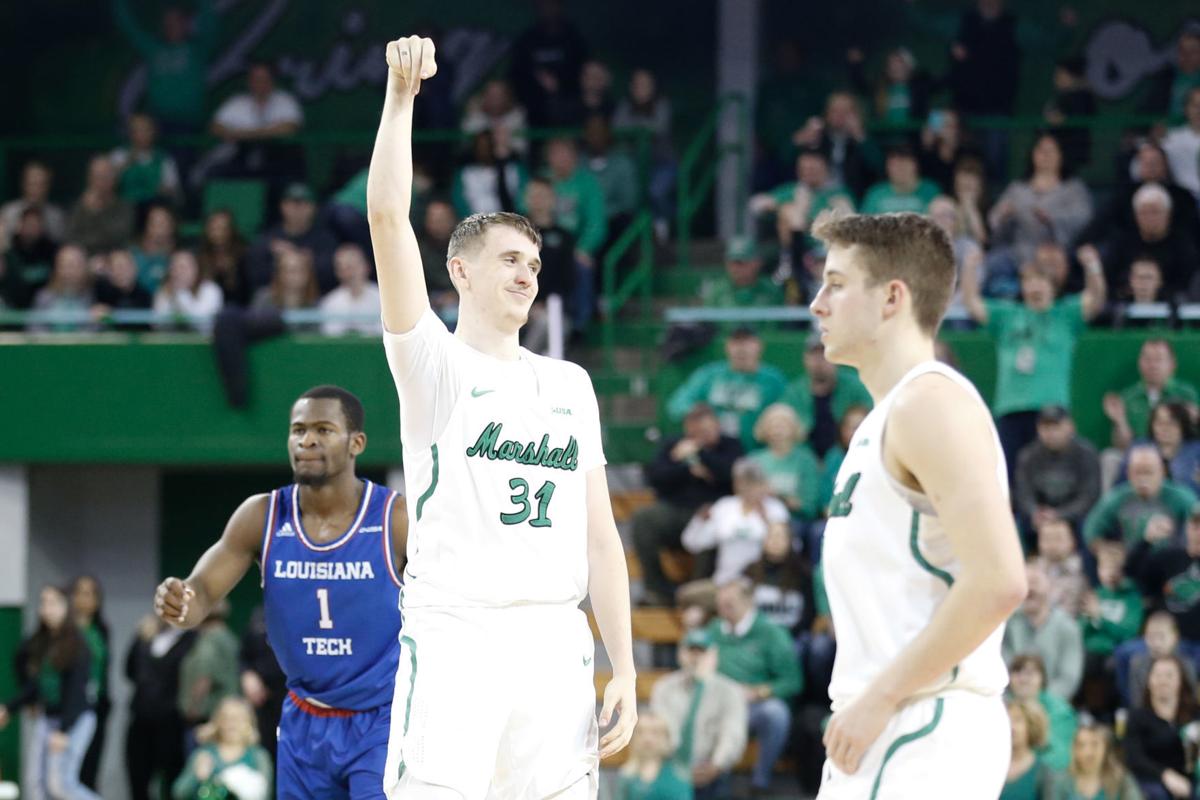 Marcus Constantino/For The Herald-Dispatch Marshall’s Mikel Beyers (31) celebrates after scoring a three-pointer during overtime of an NCAA men’s basketball game on Saturday, Feb. 8, 2020, at the Cam Henderson Center in Huntington, W.Va. 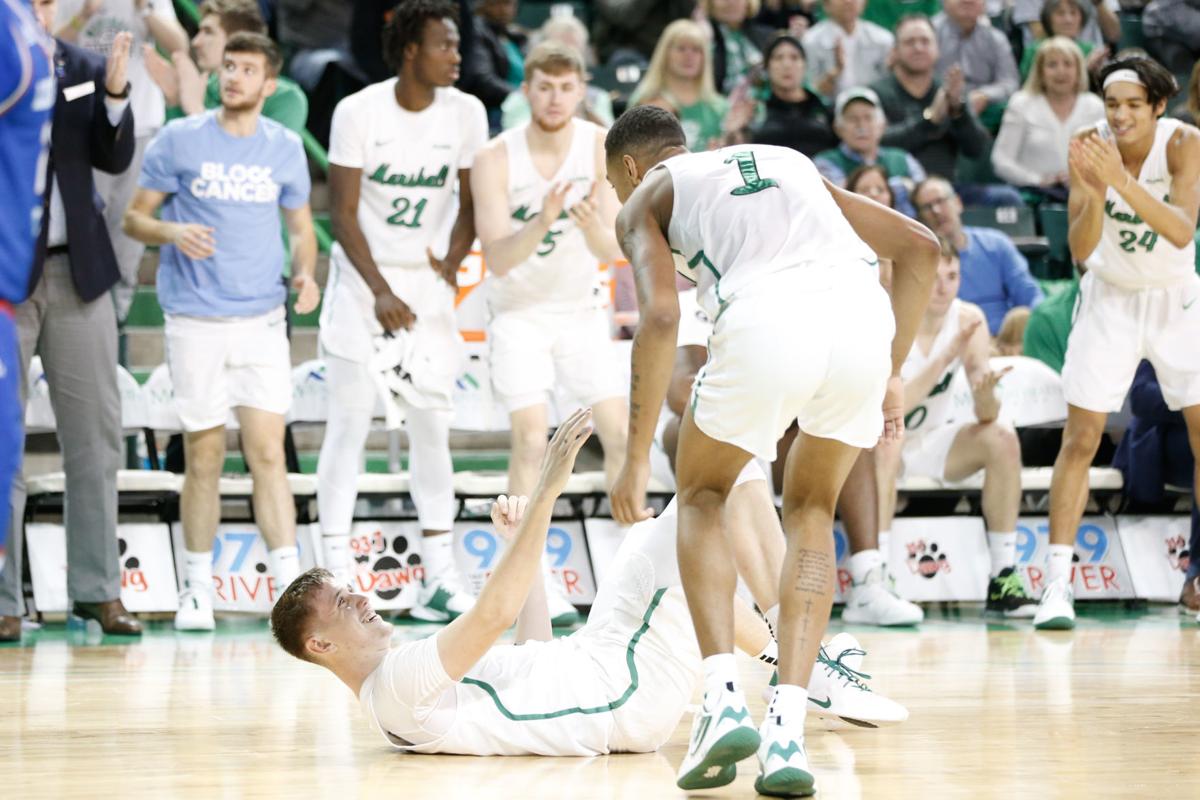 Marcus Constantino/For The Herald-Dispatch Marshall’s Mikel Beyers (31) smiles after drawing a foul during the fourth quarter of an NCAA men’s basketball game on Saturday, Feb. 8, 2020, at the Cam Henderson Center in Huntington, W.Va.

Marcus Constantino/For The Herald-Dispatch Marshall’s Mikel Beyers (31) celebrates after scoring a three-pointer during overtime of an NCAA men’s basketball game on Saturday, Feb. 8, 2020, at the Cam Henderson Center in Huntington, W.Va.

Marcus Constantino/For The Herald-Dispatch Marshall’s Mikel Beyers (31) smiles after drawing a foul during the fourth quarter of an NCAA men’s basketball game on Saturday, Feb. 8, 2020, at the Cam Henderson Center in Huntington, W.Va.

HUNTINGTON — It is not surprising if Marshall’s Mikel Beyers was not on Louisiana Tech’s scouting report coming into Saturday’s contest in Huntington.

However, Beyers made sure that he will be on future scouting reports of Marshall opponents as the Herd comes down the stretch of Conference USA action.

Beyers came off the bench for Marshall to score a career-high 24 points with 21 coming in the second half and overtime as he helped propel Marshall to an 83-79 win over Louisiana Tech.

“It all starts in practice,” Beyers said. “Just keep listening to coach, do what they say. I went through a stretch in which I wasn’t playing and they told me what I needed to do and I feel I adjusted well.”

Just how big of a surprise performance was Beyers’ game on Saturday?

Coming into Saturday, Marshall had played 11 Conference USA games. Beyers had only seen action in six of those games, scoring 18 points in 36 total minutes.

Beyers scored that many points in the second half alone on Saturday as the Herd erased a double-digit deficit.

His fadeaway 10-footer sent the game to overtime, then he connected on a 3-pointer to start the extra session, giving him 21 of his 24 points in the second half and overtime to propel the Herd.

“For someone who hasn’t played a lot of minutes for a long spurt, to come in and play — what did he play, 28 minutes — (he was) 6-of-9 from three and I thought he passed up some still,” Marshall point guard Jarrod West said. “I think he just did a great job.

“That’s a huge confidence-builder for him and that helped us a ton. We really needed that a lot.”

For Beyers, it was an important step forward during a year in which he struggled on and off the court with adversity.

The season started with struggles shooting the basketball, then Beyers went through the tragedy of losing his young stepbrother, Peyton, on Nov. 15.

Being far away from his family, who had relocated to Arizona, took its toll following the tragedy. Even though he tried to play through, mentally Beyers wasn’t there and his playing time started to dip as Marshall head coach Dan D’Antoni looked for consistency at the ‘4’ position.

In a year that has been the most complicated of his personal and basketball career, Beyers said D’Antoni offered words of wisdom.

“Coach Dan, over the couple weeks, has been saying to just make the simple plays and keep chugging along,” Beyers said. “Just be ready when your time comes. I feel like I did a pretty good job of that (Saturday) night.”

Beyers’ opportunity for his time to come came midway through the first half on Saturday.

With Marshall center Iran Bennett in instant foul trouble and backup center Goran Miladinovic sidelined with a foot injury, the Herd went to a smaller lineup, which featured Beyers and Jannson Williams together.

“Mikel Beyers had been in the closet for the entire year, (but) he stuck his head out and said, ‘You know, I can make a shot or two,’” D’Antoni said. “That’s the Mikel Beyers we recruited. That’s what we thought he could do.”

Perhaps the best aspect of the performance is not the 24 points or sending the game to overtime with a putback off an offensive rebound.

It is that his father, also Mikel Beyers, made the trip from Arizona to watch this weekend’s games. For the first time in months, the younger Mikel Beyers felt like himself again.

Basketball was smiling on him and family was smiling with him, as well. All was right in the world.

For Beyers, it made for one heck of a special Saturday night in Huntington.