Michael Payton drops back to pass during the Herd's game against Moorehead on September, 5, 1992. 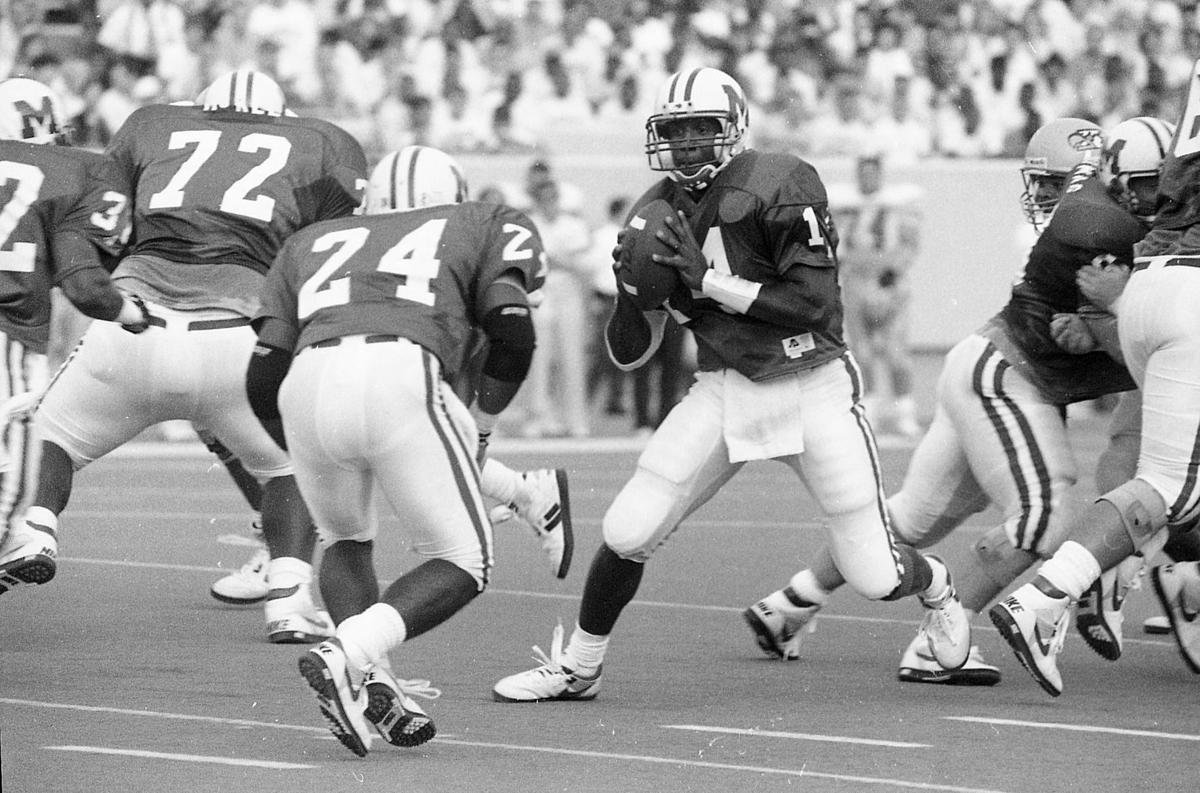 Michael Payton prepares to hand-off during the Herd's game against Moorehead on September, 5, 1992.

Michael Payton drops back to pass during the Herd's game against Moorehead on September, 5, 1992.

Michael Payton prepares to hand-off during the Herd's game against Moorehead on September, 5, 1992.

EDITOR’S NOTE: When Michael Payton began his Marshall University football career, fans weren’t sure whether the youngster had what it took to be quarterback of the Thundering Herd.

When Payton finished, he was the best player in NCAA Division I-AA.

The senior from Harrisburg, Pennsylvania, won the Walter Payton Award — the I-AA equivalent of the Heisman Trophy — as the premier player in the division and was presented the honor in New York City. Here is a recap of that story:

NEW YORK — Michael Payton received the highest individual honor in NCAA Division I-AA football but preferred to talk about team over self.

Payton received the Walter Payton Award as the I-AA national player of the year less than one week before he leads the Thundering Herd into the national championship game vs. Youngstown State in Huntington. Humbled and honored, Payton gave credit to his teammates for the honor named for Chicago Bears All-Pro running back Walter Payton.

“As far as I’m concerned, this is a team award,” Payton said. “This is for everybody at Marshall. For my teammates and for the players who came before me who made this possible. Without them, I wouldn’t be here.”

A part of Payton didn’t want to be there. With a title-game rematch to prepare for, the senior quarterback wanted to devote as much time as possible to Youngstown State, which beat Marshall 25-17 in the 1991 national championship game in Statesboro, Ga.

“We’re focused on winning a championship,” Payton said, promising the trip to the Big Apple wouldn’t distract him nor his teammates from the job at hand.

Payton earned the award by completing 268 of 415 passes for 3,610 yards and 31 touchdowns, with 12 interceptions. He led the Herd to an 11-3 record. A first-team All-American, Southern Conference player of the year and West Virginia Amateur Athlete of the Year, Payton set a I-AA record for passing efficiency.

Payton’s father, David, beamed with pride when talking about his son. David Payton said he has long known Michael had the fire it took to be a star.

“Being the youngest of two sons,” Michael was always very competitive,” David Payton said. “We would go jogging around the track and Michael, as a two-year-old, would try to keep up with his brother (David, 4). Then when he would cry when he couldn’t and want to fight.”

There was no crying on this night. Michael Payton was all smiles as he celebrated the honor. Oh, how far he had come.

Former Marshall coach George Chaump recruited Payton to Indiana (Pennsylvania), a NCAA Division II school. When Chaump left there, however, he brought Payton with him before the young passer had even played a down. The step up in competition was difficult at first and expectations were lofty at Marshall, where Carl Fodor, Tony Petersen and John Gregory set passing records before him. Payton, though, came into his own in 1991, earning second-team All-American honors and leading the Herd to the national championship game.

Last year’s loss to Youngstown, though, troubled Payton and he talked about it at the ceremony.

“That game bothered me all summer,” Payton said. “I thought about it a lot. It left a bad taste in my mouth.”

Payton hopes to taste victory in the rematch with the powerful Penguins. For now, though, the spotlight wasn’t on team but on Payton.