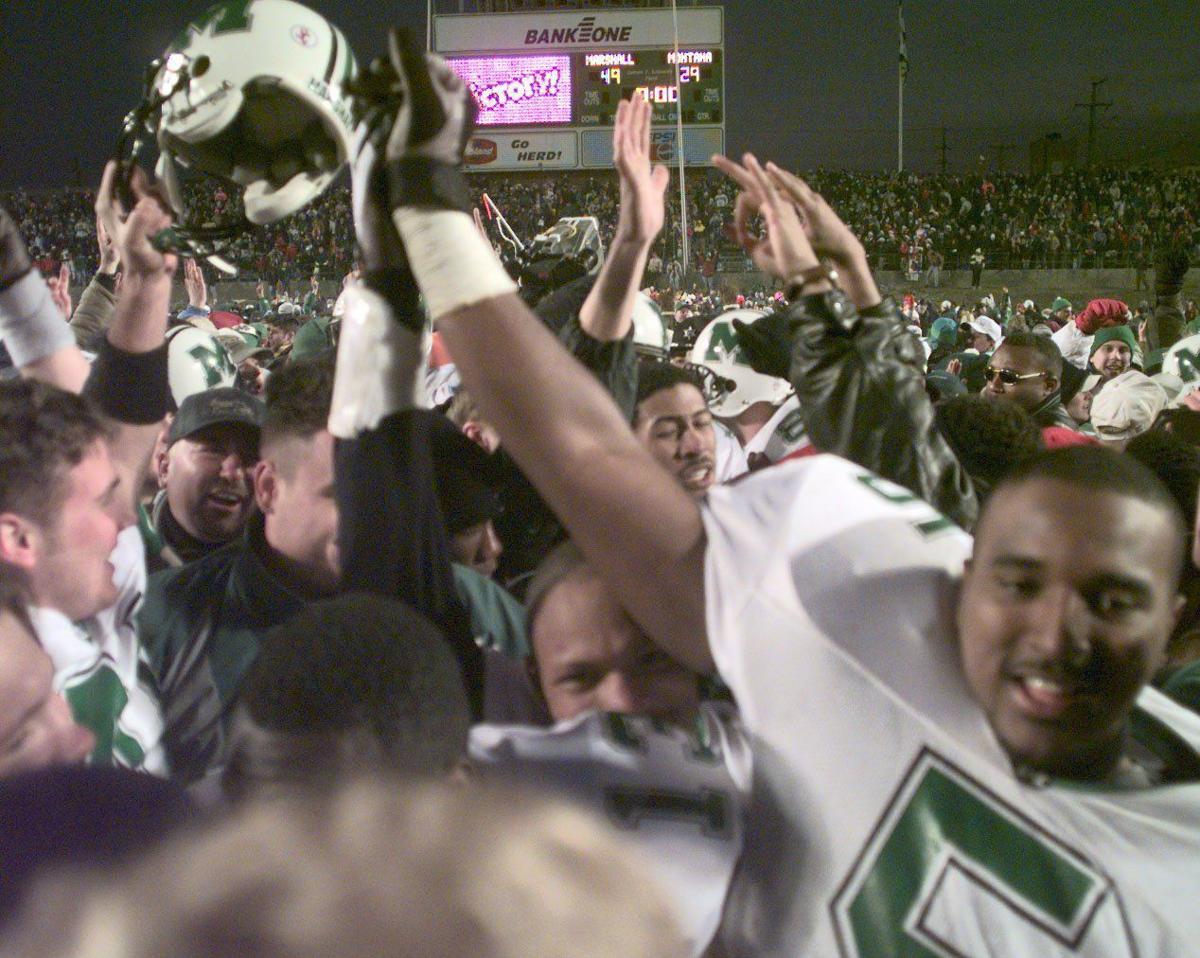 Marshall players and fans celebrate after the championship game against Montana on Dec. 21, 1996 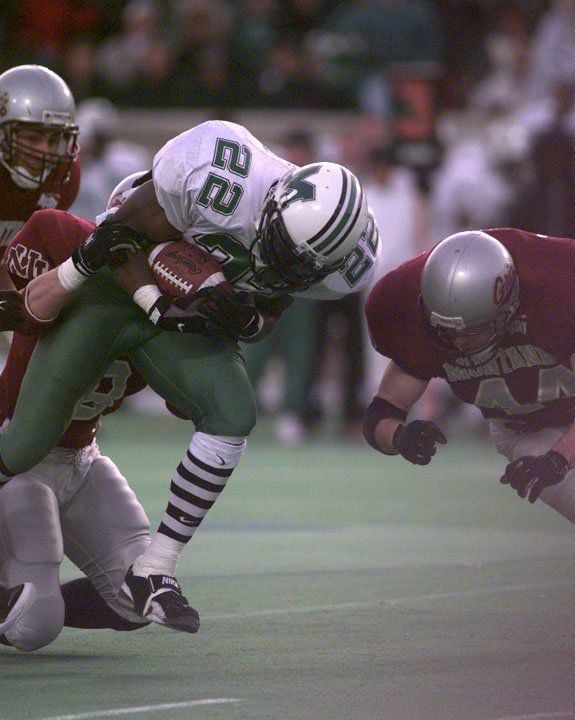 Doug Chapman of Marshall runs against Montana on Dec. 21, 1996, in the Division I-AA national championship game. 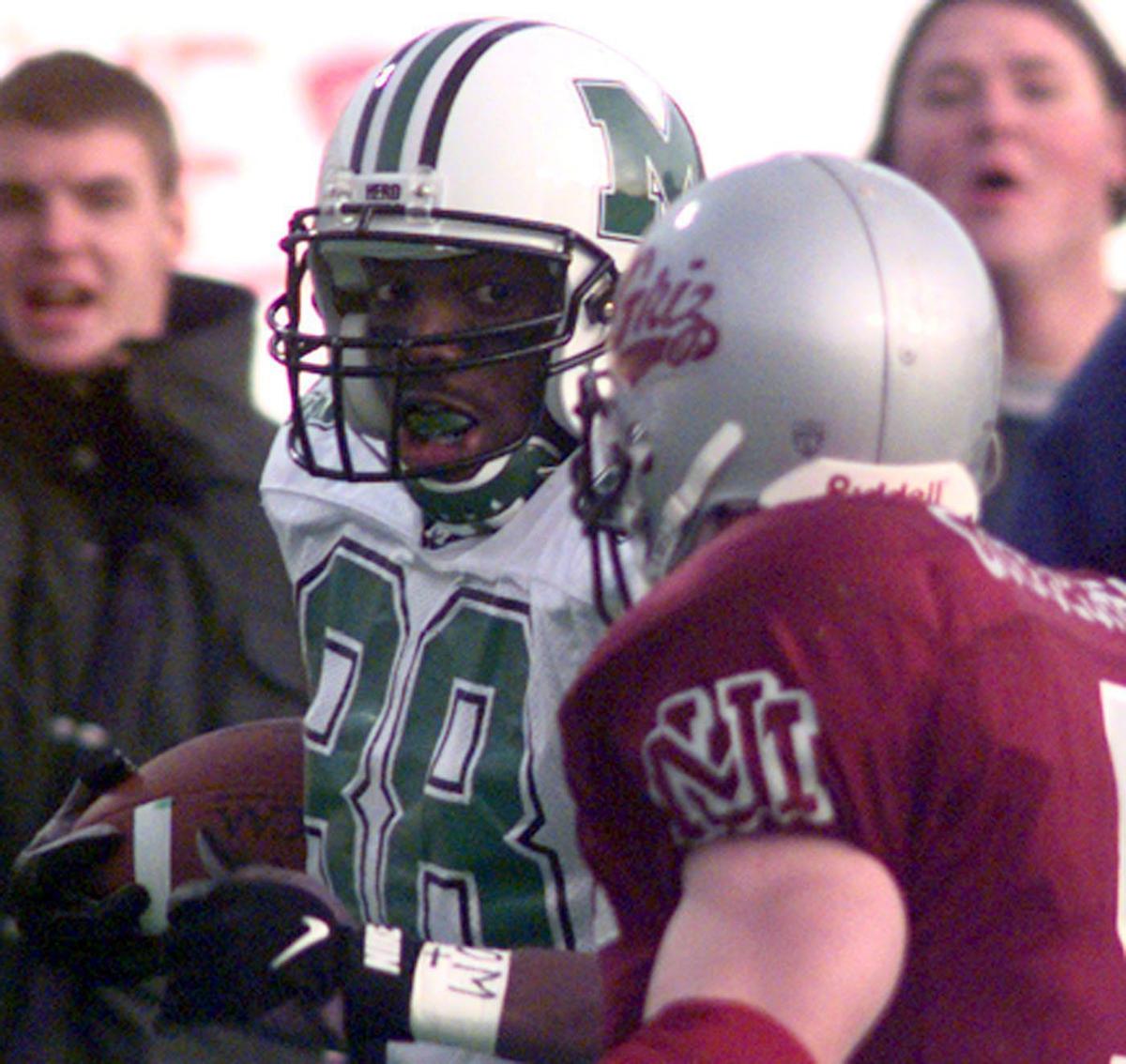 Marshall players and fans celebrate after the championship game against Montana on Dec. 21, 1996

Doug Chapman of Marshall runs against Montana on Dec. 21, 1996, in the Division I-AA national championship game.

EDITOR’S NOTE: Marshall University’s 1996 football team stormed through its season like no other in the history of its division, beating each team by at least two touchdowns and clobbering defending champion Montana 46-6 in the title game.

Following is a front page story from that day’s game:

HUNTINGTON — Marshall closed its chapter in NCAA Division I-AA history Saturday afternoon, but not before leaving a footnote for the ages.

The Thundering Herd that defeated Montana in the final game before moving up to I-A next season, quite possibly is the best team I-AA has seen in it 19-year history.

Consider that this 1996 Marshall team:

n Became only the second team in college football history to complete a 15-0 championship season. The other was Georgia Southern in 1989.

n Swept through its 11- regular season opponents to win the Southern Conference championship with an average winning margin of more than 27 points, The margin came despite the starters seldom playing deep into the third quarter.

n In the playoffs, vanquished Delaware 59-14, Furman 54-0 and Northern Iowa 31-14 before disposing of Montana in Saturday’s rematch of the 1995 title game won by the Grizzlies, 22-20 on a field goal in the final minute.

If that wasn’t enough evidence, Saturday’s victory in the match of the division’s top two teams served as the exclamation point.

With it, Marshall defeated the tournament’s top-seeded team, which entered the game with 14 straight wins this year and 21 over two seasons amid claims it, too, should be considered among the division’s best of all time.

But in front of a national television audience, and a Marshall Stadium crowd of 30,052 in the second half the Herd put to rest any debate on career I-AA standing between the two by taming the Grizzlies to complete the best season in school history.

Just like Marshall’s first 14 victories, its 15th came with relative ease, as the Herd scored on its first four possessions to spring to a 23-0 lead.

Mixing the pass and the run, Marshall, which entered the game as a seven-point favorite, was able to keep Montana’s defense on its heels to build its lead.

After forcing a Montana punt, the Herd drove 80 yards in seven plays and a penalty with quarterback Eric Kresser hitting Moss on a 19-yard pass for a touchdown.

The Herd then turned a Larry Moore interception into its next TD, a 61-yard run by Doug Chapman tjat capped a seven-play, 94-yard drive.

MU converted a fumble recovery by John Grace into a 20-lead when Kresser and Moss teamed on a 70-yard fly patter for a touchdown on the first play.

Tim Openlander completed the quick start by kicking a 20-yard field goal to culminate a 63-yard, nine-play drive midway through the second period.

Marshall put to rest any doubts of who was the dominant team in this one when Kresser hit Moss on a 54-yard TD pass on the third play of the second half. The touchdown for Moss was his 27th receiving and 28th overall, both school records.

The championship was Marshall’s second in six appearances in the finals. By winning, MU joins Georgia Southern (4), Youngstown State (3) and Eastern Kentucky (2) as teams with multiple I-AA crowns.