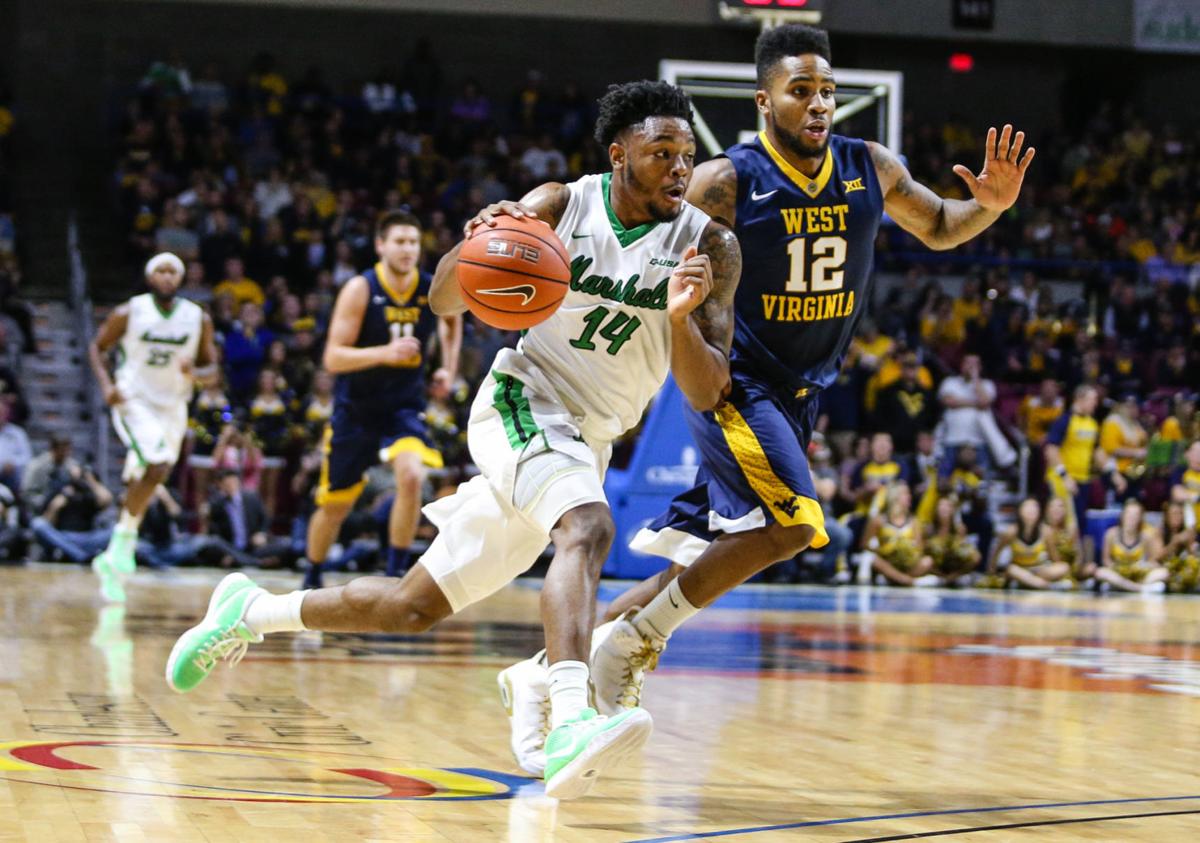 Marshall's C.J. Burks (14) speeds towards the basket as he is defended by West Virginia's Tarik Phillip (14) in the Capital Classic on Thursday, Dec. 17, 2015, at the Charleston Civic Center. 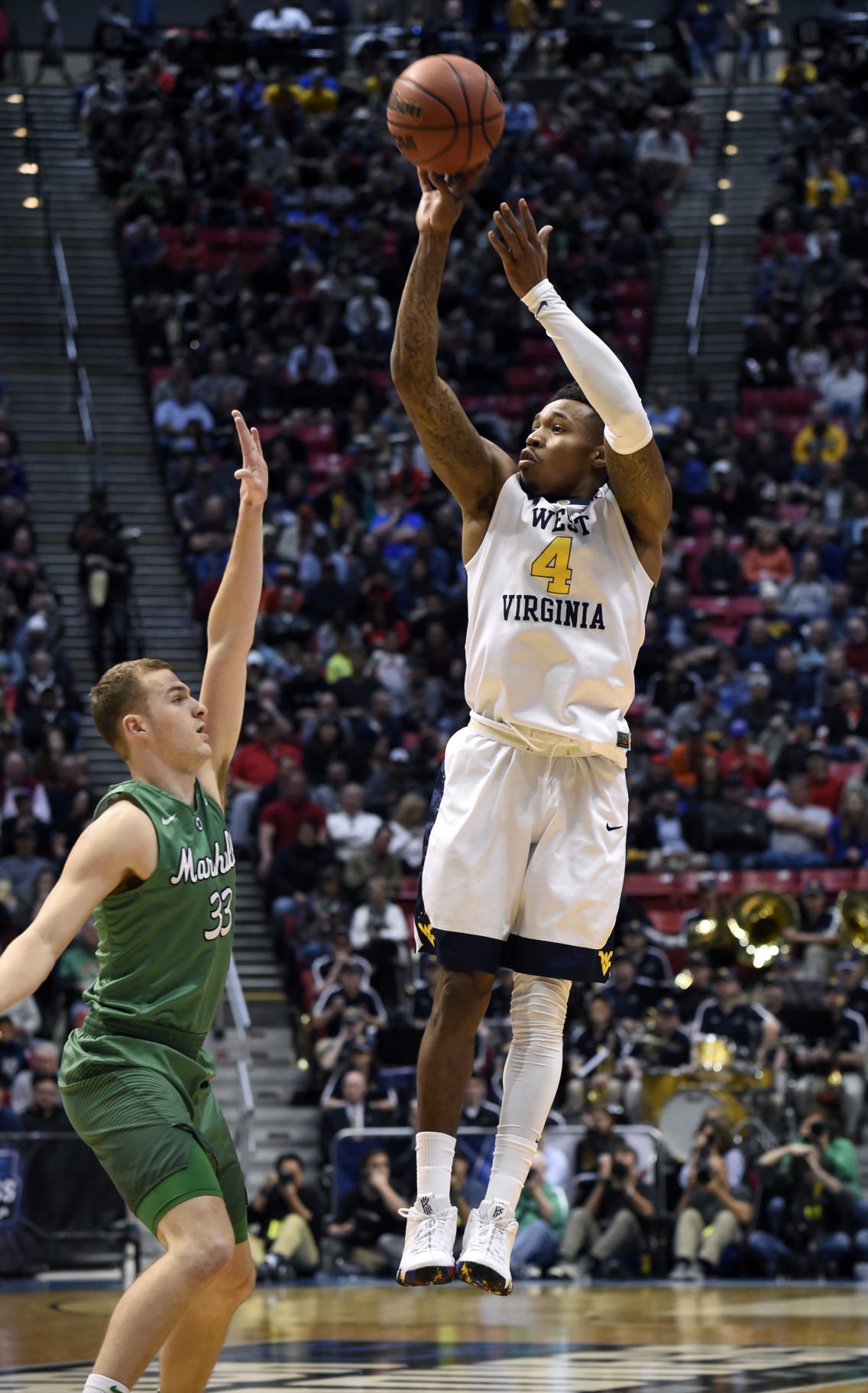 Marshall's C.J. Burks (14) speeds towards the basket as he is defended by West Virginia's Tarik Phillip (14) in the Capital Classic on Thursday, Dec. 17, 2015, at the Charleston Civic Center.

HUNTINGTON — There will be a definite West Virginia feel to the return of live basketball during The Basketball Tournament, which starts July 4 at Nationwide Arena in Columbus, Ohio.

The announcement came during a live bracket reveal at 1 p.m. through The Basketball Tournament’s social media channels on Tuesday afternoon.

The matchup also means that two of the field’s 24 teams come from the Mountain State, which is a point of pride for Jon Elmore, Marshall’s all-time leading scorer and the leader of Herd That.

More than 125 teams applied for entry to the 2020 version of The Basketball Tournament, making it special that West Virginia’s two applicants were selected.

Best Virginia earned the No. 10 seed while Herd That was the No. 23 seed.

“Out of 125 teams that applied — and that’s 30-some alumni teams with many being high-major — we made the top 24,” Elmore said. “That’s sweet. You’ve got several former NBA players who have had huge careers, you’ve got several overseas professionals and you’ve got some college basketball legends. Everybody is geared up.”

The winner of that matchup will take on The Money Team, a team owned by Floyd Mayweather, in the second round. The Money Team was the No. 7 seed and received a bye in the opening round.

Elmore and his teammates gathered at a Charleston-area business to watch the unveiling of the bracket together.

The West Virginia-based matchup is fitting, considering The Basketball Tournament was scheduled to have a Charleston regional with games at Charleston Coliseum and Convention Center when the format for the tournament was a 64-team field earlier this year.

However, COVID-19 complications forced tournament organizers to shrink the field from 64 to 24 teams while having it in one set location for safety purposes, which eliminated the various regional sites.

With 24 teams, there are eight teams who receive a bye while eight first-round games take place July 4-5 to get the field to 16 teams. Round of 16 games are scheduled for July 6-9, quarterfinals are July 10-11, semifinals are July 12 and the $1 million, winner-take-all championship is July 14.

“This is high-level basketball with money on the line in a single-elimination format,” Elmore said. “You’ve got to be ready to roll. It’s fun because you are playing with your boys on television in the middle of the summer, but there’s a purse on the line. You go in for fun, but you also go in to win the money. That’s what makes it one of the best sporting events there is.”

While the loss of regional sites is a hindrance, The Basketball Tournament being played is a victory in itself, as it will be the first live televised basketball played in the United States since COVID-19 shut down sports during the college basketball conference tournaments and forced the cancellation of the NCAA Tournament.

To be able to host the event, Columbus city leaders and Ohio leaders had to approve of the TBT health and safety plan, which includes a full quarantine for players within the event.

Players will arrive on June 30 for multiple rounds of COVID-19 testing prior to competition. Once the event is underway, a single positive test results in the removal of the entire team. TBT also has two standby teams that will travel to Columbus in case of a positive test in the pre-event screenings.

There will be no fans at the event, which means the national audience for televised live action is expected to be large. TBT event organizers recently negotiated a three-year extension with ESPN that runs TBT coverage through 2022.

Last year, 48 hours of TBT aired on ESPN’s networks with a combined audience of 5 million viewers.

One of the fun aspects of TBT is the Elam Ending, which eliminates a game clock after a certain point of the contest and features the two teams playing to a target score. It makes for an exciting game-ending format that builds to excitement and was used last year in the NBA All-Star Game.

The Marshall-West Virginia matchup brings memories of the 2018 NCAA Tournament when the two teams met in the Round of 32 following first-round wins. West Virginia defeated Marshall, 94-71, in that matchup to advance to the Sweet 16.

Now that the field is set, Elmore said it’s time to get to work in hopes of winning the $1 million purse. His team is looking to host a training camp locally, starting on June 19 to prepare.

“We would like to do a nine-day mini-camp so that, when we get up there, we’re prepared to win this thing,” Elmore said. “We are meeting with donors and are trying to get people on board to help us represent Marshall and the state.”