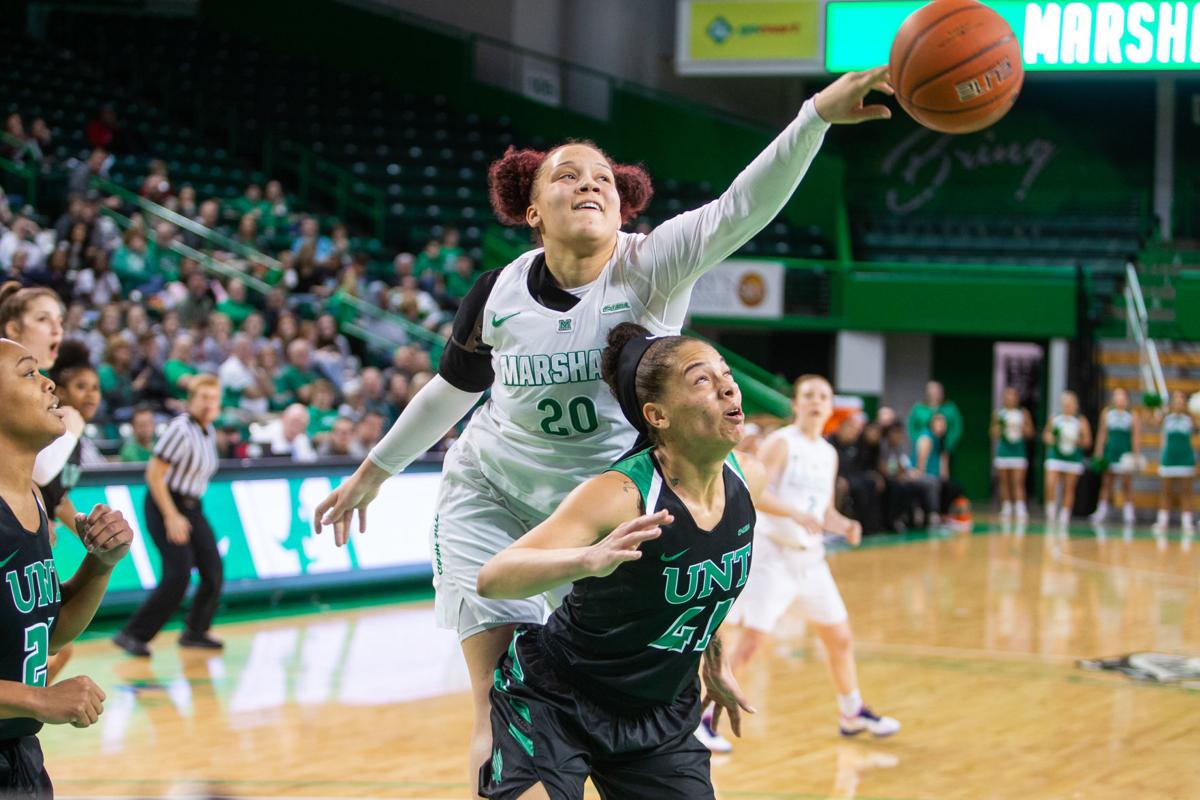 The Herd’s Taylor Pearson (20), left, knocks the rebound away from the Mean Green’s Madison Townley (41) as the Marshall University women’s basketball team takes on North Texas on Saturday, Feb. 29, 2020, at the Cam Henderson Center in Huntington. 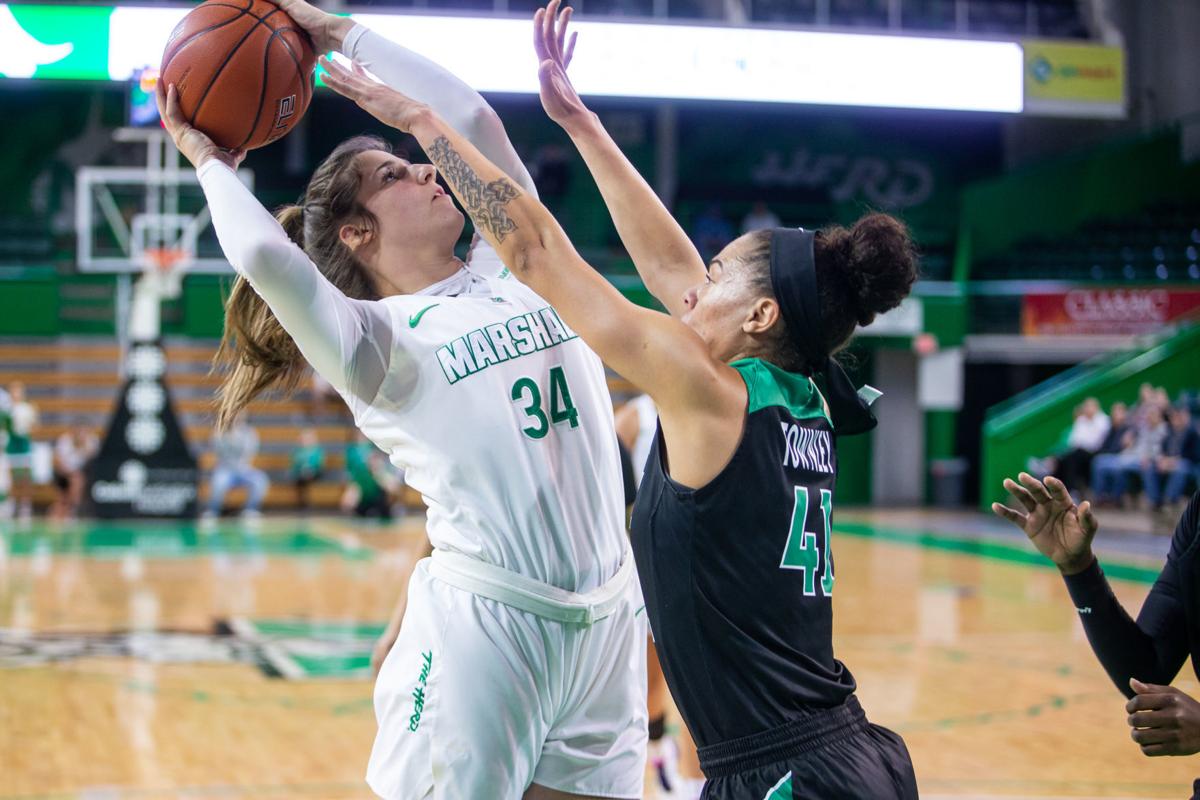 The Herd's Lorelei Roper (34), from left, attempts to put a shot in over top of the Mean Green's Madison Townley (41) as the Marshall University women's basketball team takes on North Texas on Saturday, February 29, 2020, at the Cam Henderson Center in Huntington.

The Herd’s Taylor Pearson (20), left, knocks the rebound away from the Mean Green’s Madison Townley (41) as the Marshall University women’s basketball team takes on North Texas on Saturday, Feb. 29, 2020, at the Cam Henderson Center in Huntington.

The Herd's Lorelei Roper (34), from left, attempts to put a shot in over top of the Mean Green's Madison Townley (41) as the Marshall University women's basketball team takes on North Texas on Saturday, February 29, 2020, at the Cam Henderson Center in Huntington.

Especially given that the Thundering Herd was mere minutes from hitting the court for the Conference USA quarterfinals when the tournament was canceled due to the coronavirus, it was a tough pill to swallow for Kemper and crew. There was just one resonating thought which continued as he started to speak to his team.

“I told them they went out winners,” Kemper said.

For a team that was up and down throughout the year, finishing off the season on a positive note sends the team into the offseason with momentum.

It is a major bonus for a squad that struggled down the stretch of the season.

Prior to the 71-67 overtime win over Southern Miss in the Conference USA tournament, the Herd had lost four of five games with the lone win also coming in overtime against FIU, which finished next to last in Conference USA and missed the tournament.

Following the Southern Miss win, Kemper praised his team for finding a way to grit out a win — one that now will stay with the team for the next seven months before the start of the next season.

“The thing that they get a lot of credit for is we haven’t been playing well coming in here,” Kemper said at his postgame press conference. “To kind of reset at some point and figure out that you’ve got to get back to doing the things that you’re capable of doing in terms of mental and physical toughness, they did that. They didn’t panic.”

In the game’s late stages, it was the play of junior forward Taylor Pearson and guards Kristen Mayo and Savannah Wheeler that propelled the team. Pearson did not score in the first three quarters, but had 10 consecutive points to start the fourth quarter and lead the comeback.

Mayo leaves the season on a high note, having set her career high with 22 points, while Wheeler finished with 19 points, including a 13-of-14 effort at the free throw line.

All three of those players return in 2020-21, meaning that the Herd has a solid nucleus of scorers in place.

Wheeler, the team’s freshman point guard, led Marshall with 13.4 points per game while Pearson added 11.1 and Mayo was just behind at 10.9. Collectively, the trio hit 146 3-pointers.

While Marshall will have its scoring balance returning in the backcourt, the team loses three key pieces to its post presence in Khadaijia Brooks, Princess Clemons and Ashley Saintigene.

Brooks and Clemons offered the Herd versatility, being able to guard post players on the opposing team while also assisting the Herd guards in getting the ball up the floor against pressure.

Brooks led the team with 5.4 rebounds a game while Clemons and Saintigene each were at 5.1. Saintigene was also a major inside defensive presence, but injuries hindered her final season.

Rebounding was an aspect in which the Herd struggled in during the 2019-20 season as the team was minus-4.0 per game in its efforts on the glass.

Especially with three of the team’s four leading rebounders (Pearson also at 5.1) now gone, the Herd must find someone to step up in that realm while adding to the shot-blocking presence from Saintigene underneath.

The role of Lorelei Roper likely will expand after a strong finish to the 2019-20 season while the team also will have Ole Miss transfer Mahogany Matthews — a 6-1 center — in the mix.

Freshman Alexis Johnson, who also saw some time on the court this season, will be in the rotation, providing an athletic player who can help the team increase its pace for the guards. Paige Shy is also a versatile player that can aid in rebounding while adding a 3-point shooting ability to the team.

With Pearson and Mayo as seniors and Wheeler stepping into her own as the on-floor leader after earning Conference USA All-Freshman accolades, the future appears bright for the Herd.

But getting to the consistent level of league-leaders Rice, Old Dominion and Middle Tennessee is going to be a tall task that starts with Marshall bolstering its frontcourt.