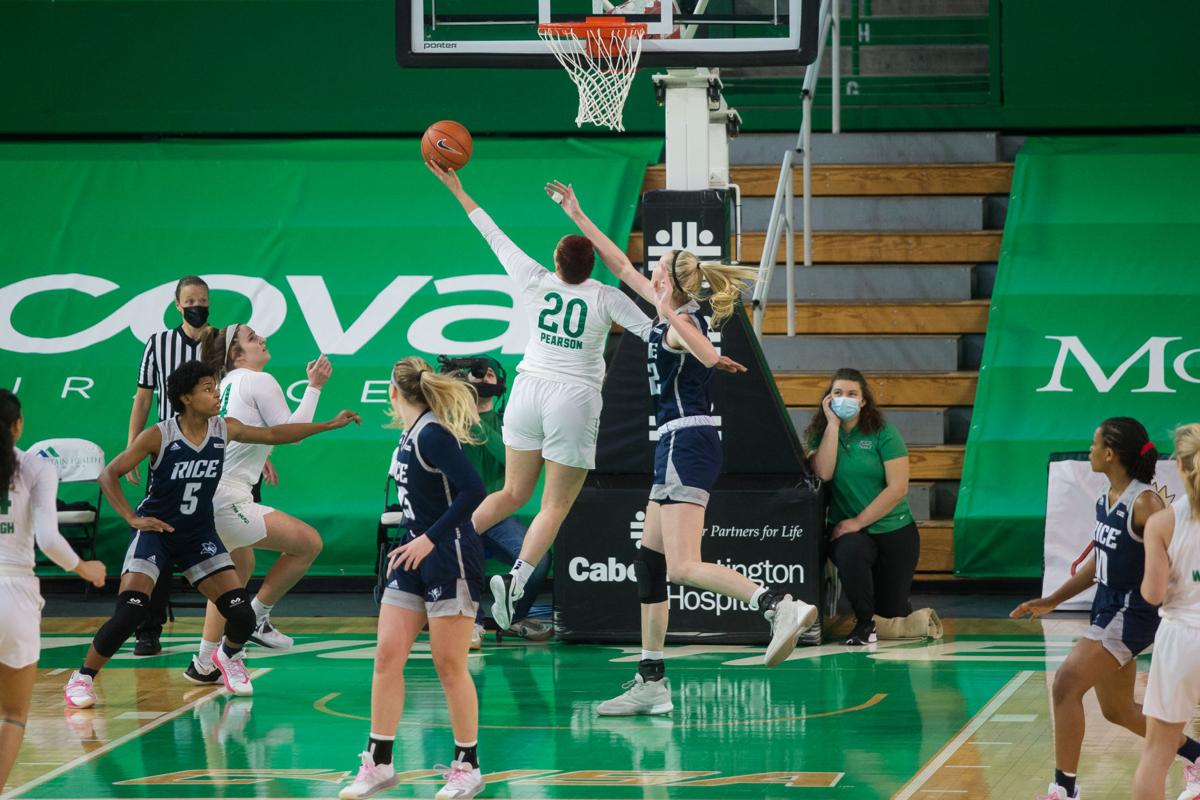 The Herd’s Taylor Pearson (20), center, takes a layup as the Marshall University women’s basketball team takes on Rice University on Sunday in Huntington. 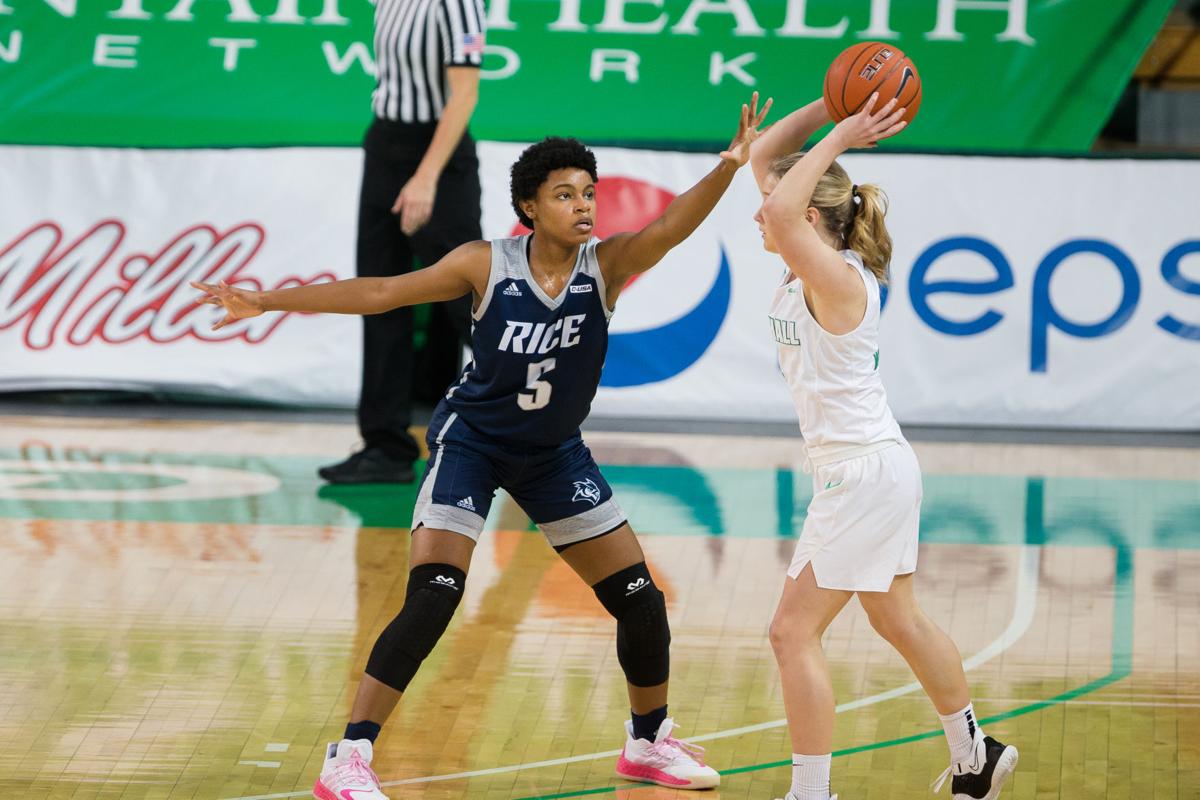 The Owls’ Destiny Jackson (5), from left, reaches out to block a pass from the Herd’s Savannah Wheeler (4) as the Marshall University women’s basketball team takes on Rice University on Sunday, February 21, 2021, in Huntington. 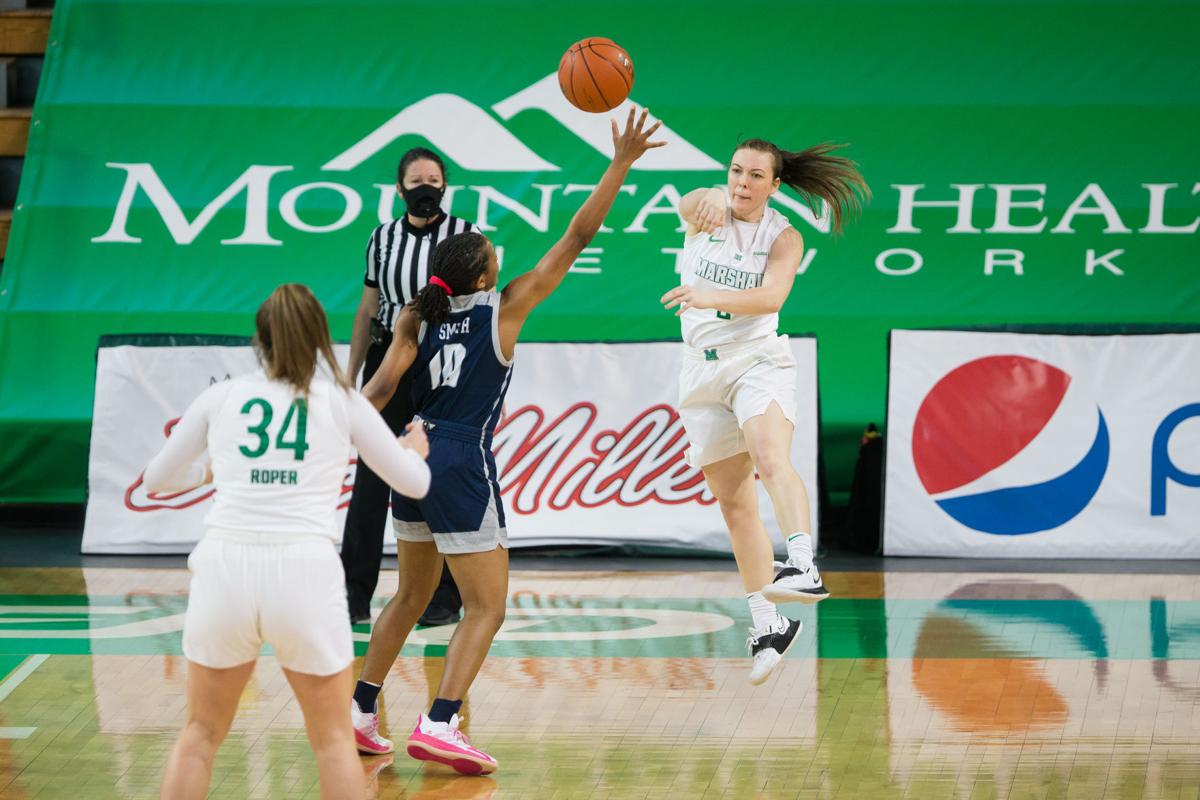 The Herd’s Kristen Mayo (2), from right, passes the ball over top of the Owls’ Jasmine Smith (10) to Lorelei Roper (34) as the Marshall University women’s basketball team takes on Rice University on Sunday in Huntington.

The Herd’s Taylor Pearson (20), center, takes a layup as the Marshall University women’s basketball team takes on Rice University on Sunday in Huntington.

The Owls’ Destiny Jackson (5), from left, reaches out to block a pass from the Herd’s Savannah Wheeler (4) as the Marshall University women’s basketball team takes on Rice University on Sunday, February 21, 2021, in Huntington.

The Herd’s Kristen Mayo (2), from right, passes the ball over top of the Owls’ Jasmine Smith (10) to Lorelei Roper (34) as the Marshall University women’s basketball team takes on Rice University on Sunday in Huntington.

HUNTINGTON — Marshall senior forward Taylor Pearson has made plenty of memories at Cam Henderson Center during her career with the Herd.

Sunday’s final home game in Huntington might have been her favorite, however.

Pearson delivered a staggering 3-pointer in transition that was part of a run in which Marshall scored the final 18 points of the game to end Rice’s unbeaten Conference USA mark in a 68-56 win.

“It’s probably the best win we’ve had,” Kemper said. “There’s quite a few of them that I’m proud of, but that’s a really good basketball team who played hard.”

Marshall (6-8, 5-7 C-USA) trailed by as many as nine in the final period, but rallied to take its first lead since the midway point of the first quarter on a pair of Savannah Wheeler free throws with 2:30 left.

Rice’s Nancy Mulkey had a chance to give the Owls the lead again, but Marshall’s Lorelei Roper contested a shot, which Pearson collected on the miss.

The senior got the ball to Wheeler to start the break and flared out to the wing. No Rice defender stayed with Pearson and Wheeler found her alone.

“It was kind of nerve-wracking,” Pearson said. “I kind of expected somebody to come, but they never came so that’s their loss.”

Pearson knocked down the shot with confidence — something head coach Tony Kemper had preached to his team about after Saturday’s loss to the Owls.

Kemper raved about his team’s performance on both ends in a crucial situation against Conference USA’s top teams in the past three seasons.

“You have to stare down that situation and you have to find a way to make more plays than them,” Kemper said. “Our team responded.”

That response was loudest from Wheeler, who scored a game-high 25 points — including eight in the fourth quarter — to lead Marshall.

Marshall trailed by nine after the first possession of the fourth quarter and the Rice lead stayed at arm’s length until the midway point of the frame when Kristen Mayo — the team’s only other senior — had a pivotal swing for the Herd.

Mayo knocked down a 3-pointer with 3:50 left that cut Rice’s lead to 56-53 that put the pressure on the Owls, who would not score again.

While the shots by Mayo and Pearson were big, Mayo was quick to point out the defensive effort by the Herd in the final period that swung the game’s momentum.

Through three quarters, Rice shot 55 percent from the floor and had a 29-13 rebounding advantage.

Marshall’s defense turned that around in the fourth, holding the Owls to 2 of 13 from the field while winning the battle on the glass by a 12-5 margin with many being loose-ball situations in which the Herd went and got the basketball.

“We started hitting shots on offense, but the biggest thing for us, I feel like, was stops,” Mayo said. “Rice is a really good team, so getting stops on them is probably one of the toughest challenges we’ve had to face — especially there in the fourth quarter.”

That loss came in spite of a 16-0 Rice run between the first and second quarters that produced a double-digit lead before a driving layup from Mayo made it 31-23 at the half.

Mulkey finished with 15 points and nine rebounds for the Owls, but was limited to just four points in the second half. Lauren Schwartz added 14 points in the Owls’ loss, which included an 8-for-8 performance at the foul line (all in the third quarter).

In addition to a win on Senior Day, the victory looms large for Marshall’s chances to advance to the Conference USA Tournament in Frisco, Texas, from March 10-14.

Currently, Marshall is locked in a tight battle in the East Division with four teams within a game of each other.

Despite the tough schedule ahead, Kemper said the momentum of Sunday’s win should resonate moving forward.

“They certainly should have learned what they are capable of, competitively, when that buzzer went off tonight,” Kemper said.