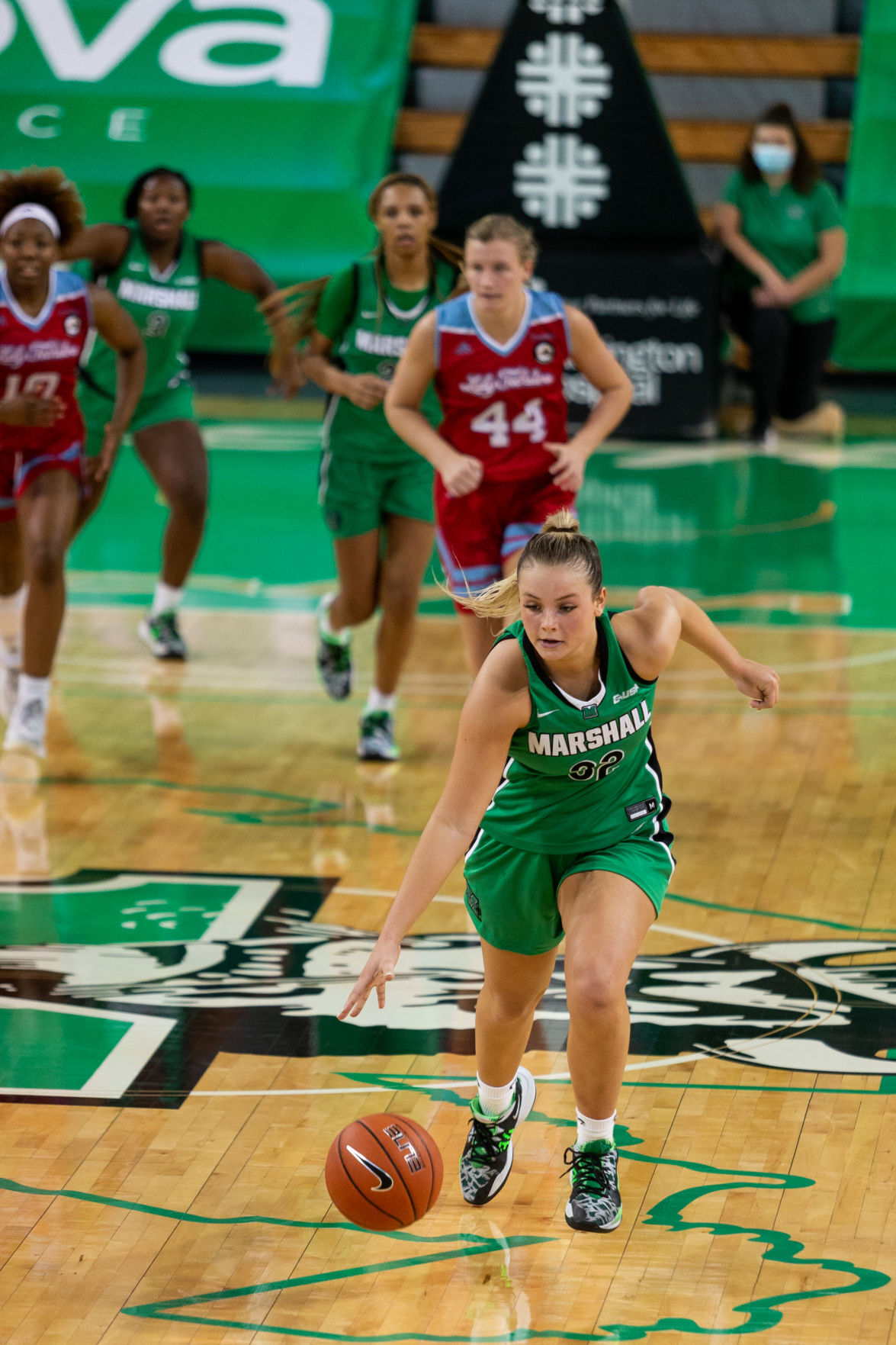 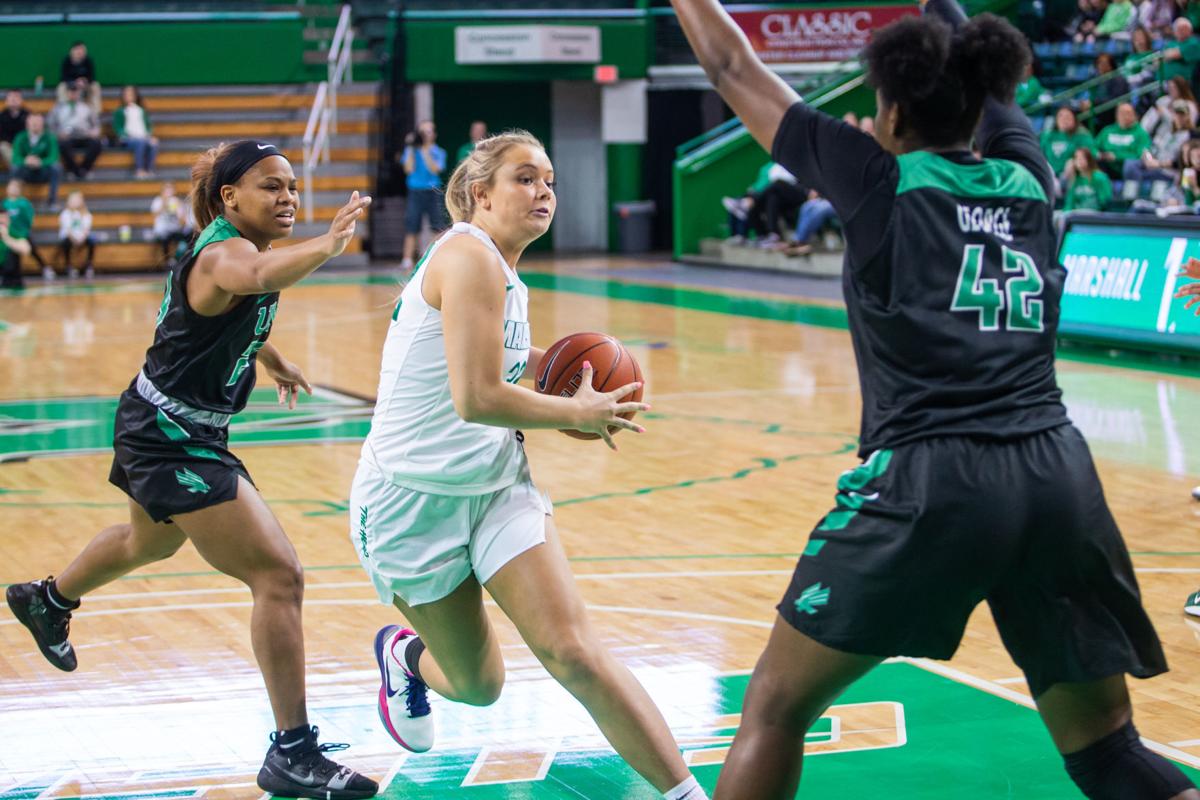 The Herd's Paige Shy (32), from left, attempts to drive the ball passed the Mean Green's Anisha George (42) as the Marshall University women's basketball team takes on North Texas on Saturday, February 29, 2020, at the Cam Henderson Center in Huntington.

The Herd's Paige Shy (32), from left, attempts to drive the ball passed the Mean Green's Anisha George (42) as the Marshall University women's basketball team takes on North Texas on Saturday, February 29, 2020, at the Cam Henderson Center in Huntington.

HUNTINGTON — When Marshall’s women’s basketball team opened its Conference USA slate against Louisiana Tech last week, the Herd did so with a limited roster due to COVID-19 contact tracing.

Still, the Herd banded together to earn a split in the opening conference weekend.

This week, Marshall embarks on its first road weekend in Conference USA play at Charlotte for games on Friday and Saturday against a 49ers team that has battled some high-major competition to the wire.

As Marshall head coach Tony Kemper said this week, his team isn’t shying away from any obstacles placed in front of them.

“Obviously, it’s a really good basketball team,” Kemper said of Charlotte. “They’ve been that way in the past. It’s nothing new. Coach (Cara) Consuegra does a great job. We’ll have to be very tough on the road mentally, physically to do it back-to-back days. It’s going to be the same plan as we’ve had — hang in there as good as you can and hopefully have a chance to win it in the fourth quarter.”

Charlotte is 1-4 on the season, but Kemper said the record is not indicative of the team that the 49ers possess. He said a deeper dive into the quality of games they played show Consuegra has plenty of talent in Charlotte.

“Probably the easiest measuring stick of Charlotte is you look at how they’ve done against Power 5 opponents,” Kemper said. “They’ve played three, I think, and gone to the wire with Clemson, North Carolina and Wake Forest, I believe.”

The 49ers have not been on the court since a Dec. 11 win over Campbell due to COVID-19 related issues.

Last week’s Conference USA contests between Charlotte and Western Kentucky were postponed, meaning the 49ers have to knock off some of the rust of a lengthy layoff prior to their first conference action.

Charlotte is led by guards Jada McMillian and Octavia Jett-Wilson, who are averaging 14.6 and 14.0 points per game respectively to lead the 49ers.

One of the difference-makers in this matchup, however, could be Jazmin Harris, the 49ers’ 6-foot-3 center who is averaging 10.3 points and 6.8 rebounds per game. Harris will be a matchup problem for Marshall, who comes in at 2-2 overall and 1-1 in Conference USA.

Last weekend, the Herd led early in the first game of the series with Louisiana Tech, only to see its chances at a win fall by the wayside in the second half and subsequent overtime in a 61-51 loss.

The following day, Marshall rebounded with a 61-57 win over Louisiana Tech that showed resilience as the Herd again built a lead and fought off a comeback attempt from the Lady Techsters.

At the center of that success in game two was Marshall guard Paige Shy, who contributed career highs of 11 points and nine rebounds.

Shy set the tone by hitting a 3-pointer to start the game, then consecutive 3-pointers in a second quarter run that pushed the lead to double-figures.

However, Shy’s biggest contributions came on the glass in the final quarter as she battle for five of her nine rebounds with three coming in the final possessions as Marshall staved off a late charge.

“We did come with more energy — like a chip on our shoulder — to prove something in that game, and we came out with a win,” Shy said.

With Marshall’s player situation still unsettled, Shy is likely to be another key figure for the Herd as they travel to Halton Arena for this weekend’s games.

Kemper’s team has battled lineup switches and adversity throughout the early portion of the season, so he expects nothing different with the weekend serving as the latest in a year of learning experiences for his team.

“Sometimes, it doesn’t work the way you want it to work and sometimes, you have to find a way forward when you don’t have everything lined up,” Kemper said. “I think this group has really learned that.”

Friday’s first game is scheduled for a 6 p.m. start while Saturday’s contest is a 3 p.m. afternoon game at Halton Arena in Charlotte.