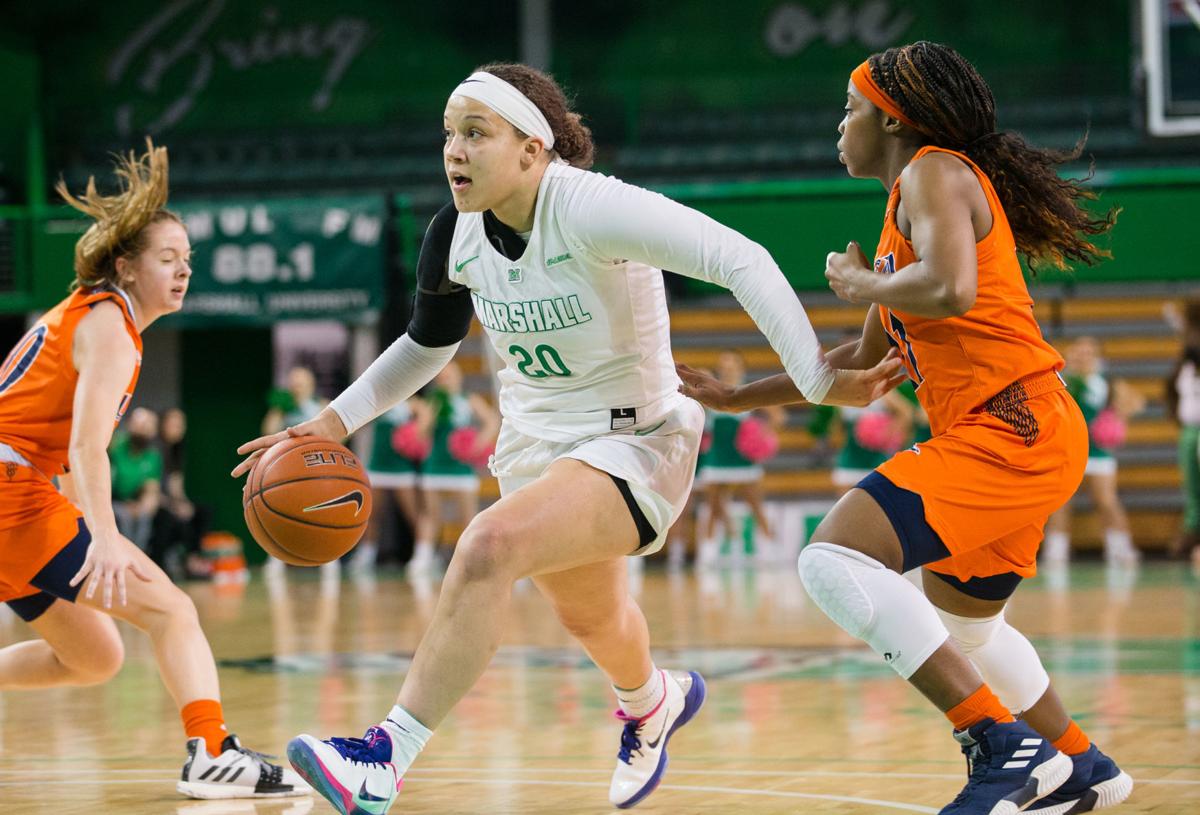 Marshall's Taylor Pearson (2) drives the lane past UTSA's Charlene Mass (11) during an NCAA women’s basketball game on Thursday, Feb. 13, 2020, at the Cam Henderson Center in Huntington. 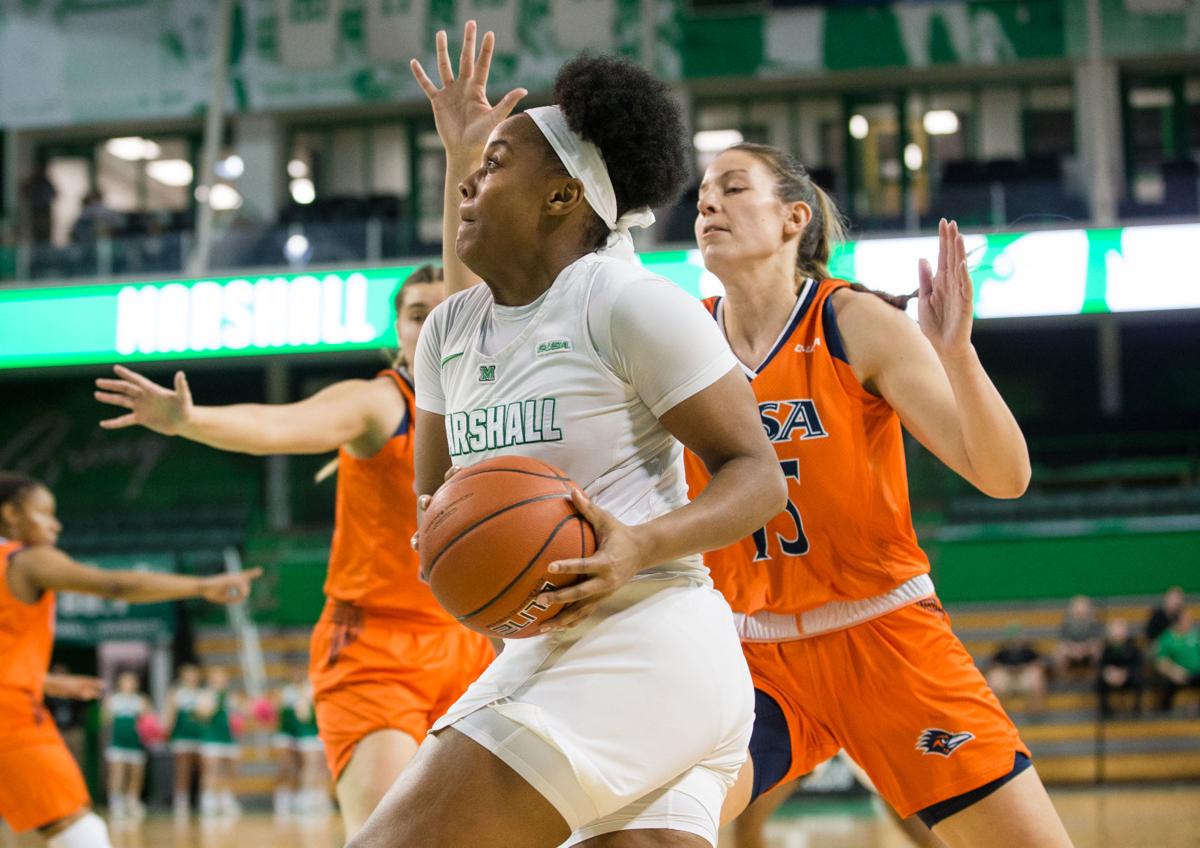 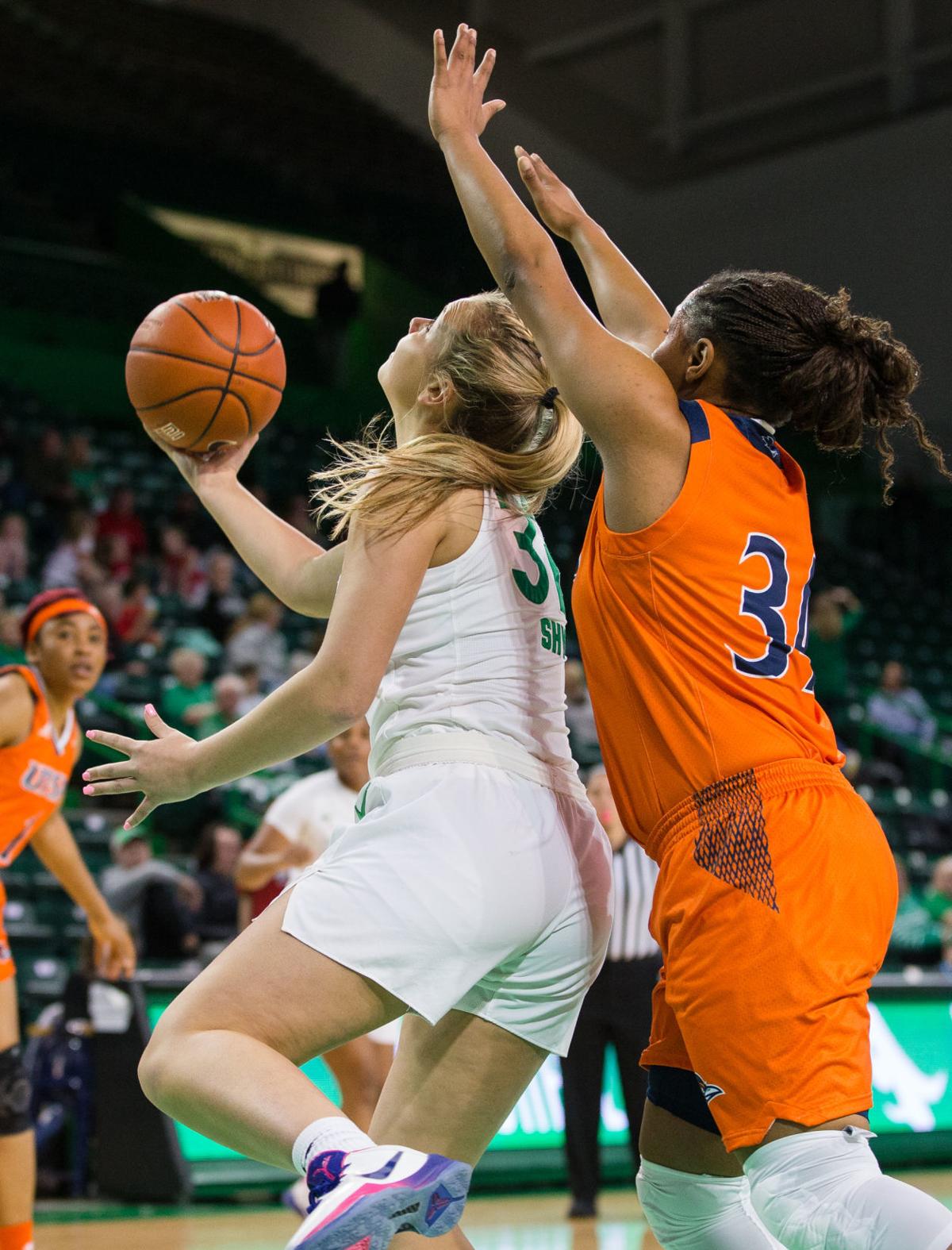 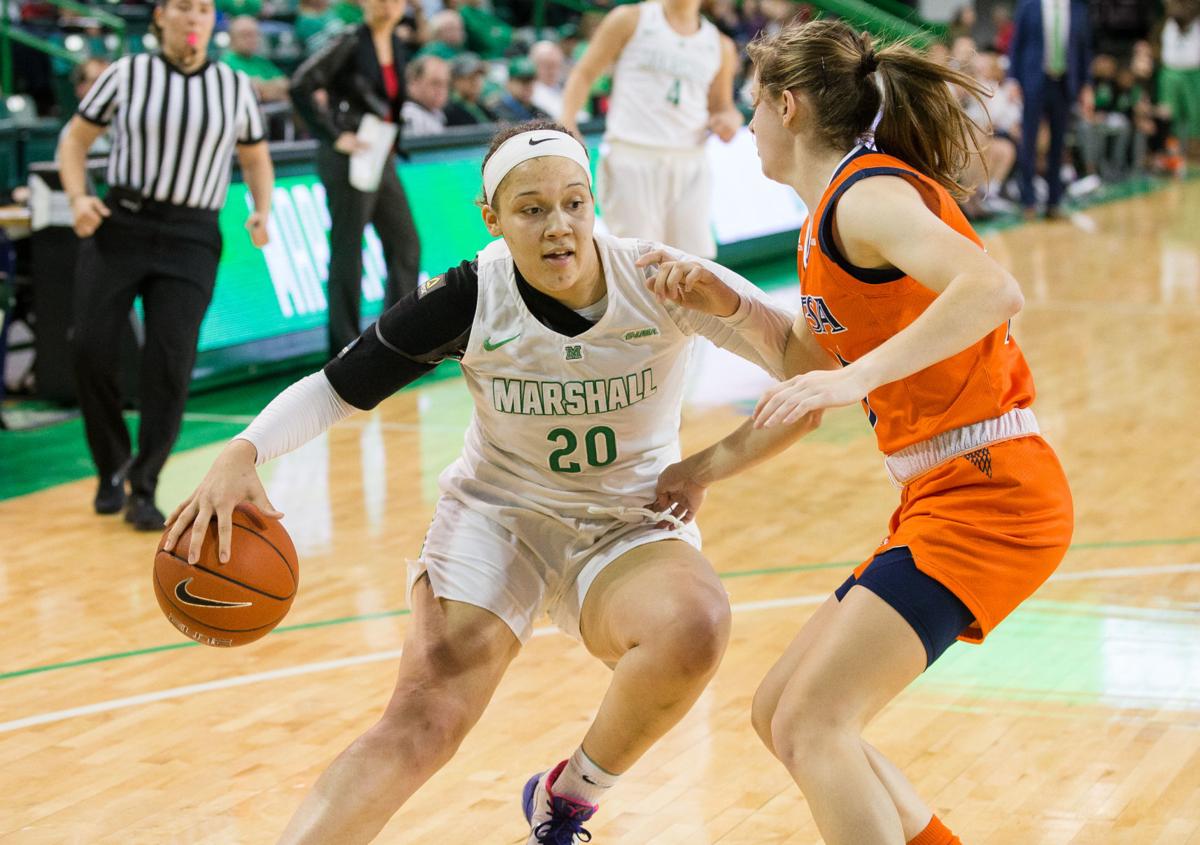 Marshall's Paige Shy (32) drives baseline as the Herd takes on UTSA during an NCAA women’s basketball game on Thursday, Feb. 13, 2020, at the Cam Henderson Center in Huntington. 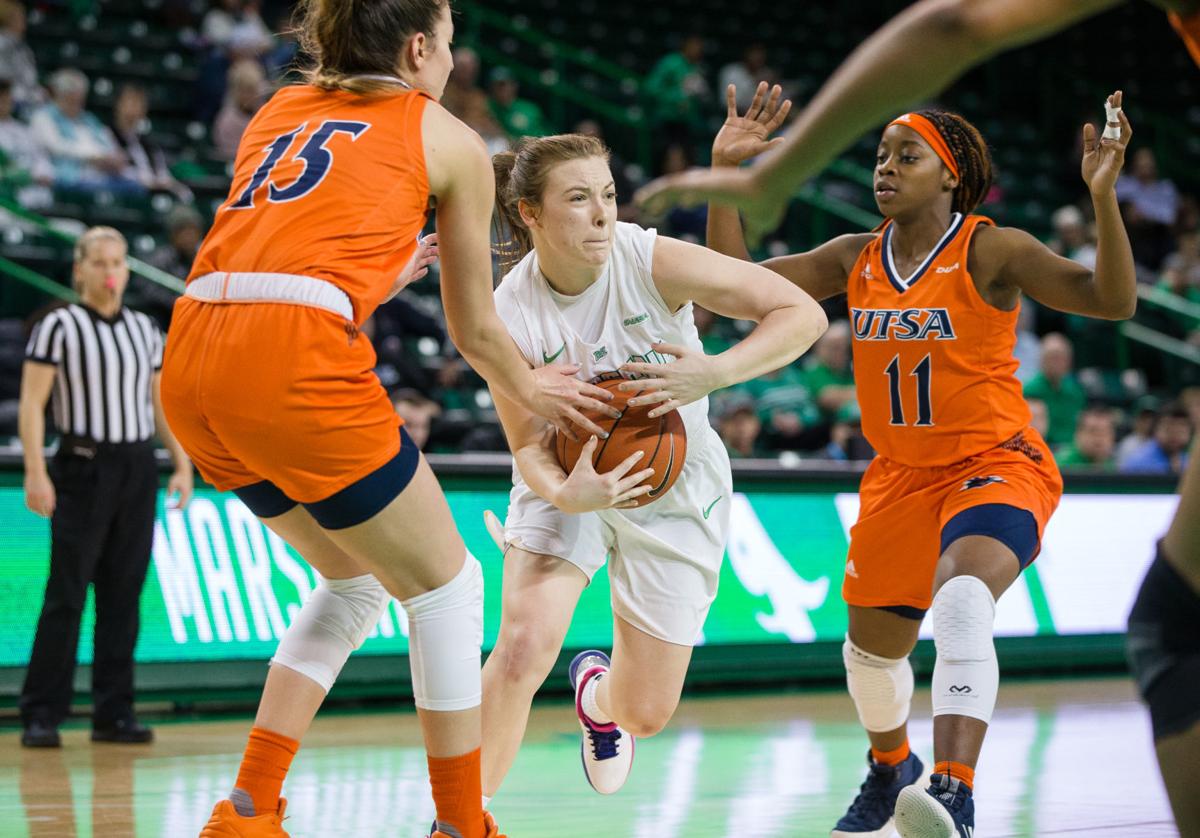 Marshall's Kristen Mayo (2) attempts to push past UTSA defenders Timea Toth (15) and Charlene Mass (11) during an NCAA women’s basketball game on Thursday, Feb. 13, 2020, at the Cam Henderson Center in Huntington.

Marshall's Taylor Pearson (2) drives the lane past UTSA's Charlene Mass (11) during an NCAA women’s basketball game on Thursday, Feb. 13, 2020, at the Cam Henderson Center in Huntington.

Marshall's Paige Shy (32) drives baseline as the Herd takes on UTSA during an NCAA women’s basketball game on Thursday, Feb. 13, 2020, at the Cam Henderson Center in Huntington.

Marshall's Kristen Mayo (2) attempts to push past UTSA defenders Timea Toth (15) and Charlene Mass (11) during an NCAA women’s basketball game on Thursday, Feb. 13, 2020, at the Cam Henderson Center in Huntington.

HUNTINGTON — On a night where the offense didn’t get in a great flow, Marshall’s women’s basketball team made sure its defense stayed consistent.

The Herd limited UTSA to 33 percent shooting and forced 19 turnovers while not allowing a field goal in long stretches during a 66-53 win over the Roadrunners at Cam Henderson Center on Thursday night.

“Good, solid win,” Marshall head coach Tony Kemper said. “It wasn’t perfect, but it was good enough and we needed it.”

Marshall (10-13, 5-7 Conference USA) got a balanced scoring effort to earn the win, which was the team’s third in four C-USA contests.

Taylor Pearson and Savannah Wheeler each led the way with 13 points while the Herd got needed post points from Khadaijia Brooks, Princess Clemons and Lorelei Roper.

Brooks had 11 points on an efficient 3-of-4 shooting performance.The senior showed poise on a night where the Herd forced some shots — especially early.

“This was one of the games where I felt like I was productive,” Brooks said. “I didn’t really press, but I was effective.”

On a night where Kemper felt most of the offensive players forced the issue, he said his senior steadied the ship.

“I really appreciate her tonight because she led in the right way,” Kemper said.

Clemons added 10 points and five rebounds while leading the Herd’s defense with five steals, as well.

Marshall’s offense wasn’t exactly fluid throughout, shooting just 32 percent, but the Herd made a concerted effort in the second half to improve its efficiency with effective results.

After hitting just 4-of-23 3-point attempts in the first half, Marshall shot just six in the second half and connected on three of them.

Instead of forcing shots, the Herd opted to attack the rim and got to the foul line with consistency. Marshall was rewarded for its efforts, knocking down all 17 attempts from the line.

“I think that’s probably the key to this game when you look at the stats — we got there and we made them all,” Kemper said. “If you go 12-for-17 or something, this thing is tight.”

While Marshall shot poorly from the outside in the first half, it got its biggest downtown connection of the game just before halftime.

After freshman Paige Shy collected an offensive rebound between three UTSA players, Shy kicked out to Wheeler, who knocked down a 3-pointer that set the halftime score at 28-22 and ended a drought of more than four minutes in which the Roadrunners had cut a 12-point lead to three points.

“I thought it was important — maybe even just for me, like, sanity,” Kemper said. “It was nice to be up six instead of three because I just felt like, ‘Gosh, guys, we’re making it harder than we need to.’”

Wheeler’s 3-pointer appeared to stem momentum back the Herd’s way as Marshall started the second half on a 12-3 run and never looked back.

Following the run to open the third quarter, the lead dipped under double-figures just once — that coming after three consecutive 3-pointers from Karrington Donald late in the fourth quarter that cut the advantage from 18 to nine.

Donald finished with a game-high 21 points for UTSA (6-17, 2-10 Conference USA), but also had seven turnovers. Evelyn Omemmah added 14 points and eight rebounds in the loss.

UTSA jumped out to a 7-0 advantage, but Roper was able to get on track early to help the Herd in a strong surge late in the first quarter.

Roper scored Marshall’s first six points of the contest and had two baskets to propel a 21-2 run over 10 minute of action in which the Herd turned an early 9-2 deficit into a 23-11 advantage.

Roper, who came in averaging 1.9 points and 2.2 rebounds, had eight points and a career-high 10 rebounds in the win.

Marshall returns to action at 1 p.m. on Saturday when the Herd takes on UTEP at Cam Henderson Center.

Marshall takes on UTSA during an NCAA women’s basketball game on Thursday, Feb. 13, 2020, at the Cam Henderson Center in Huntington.