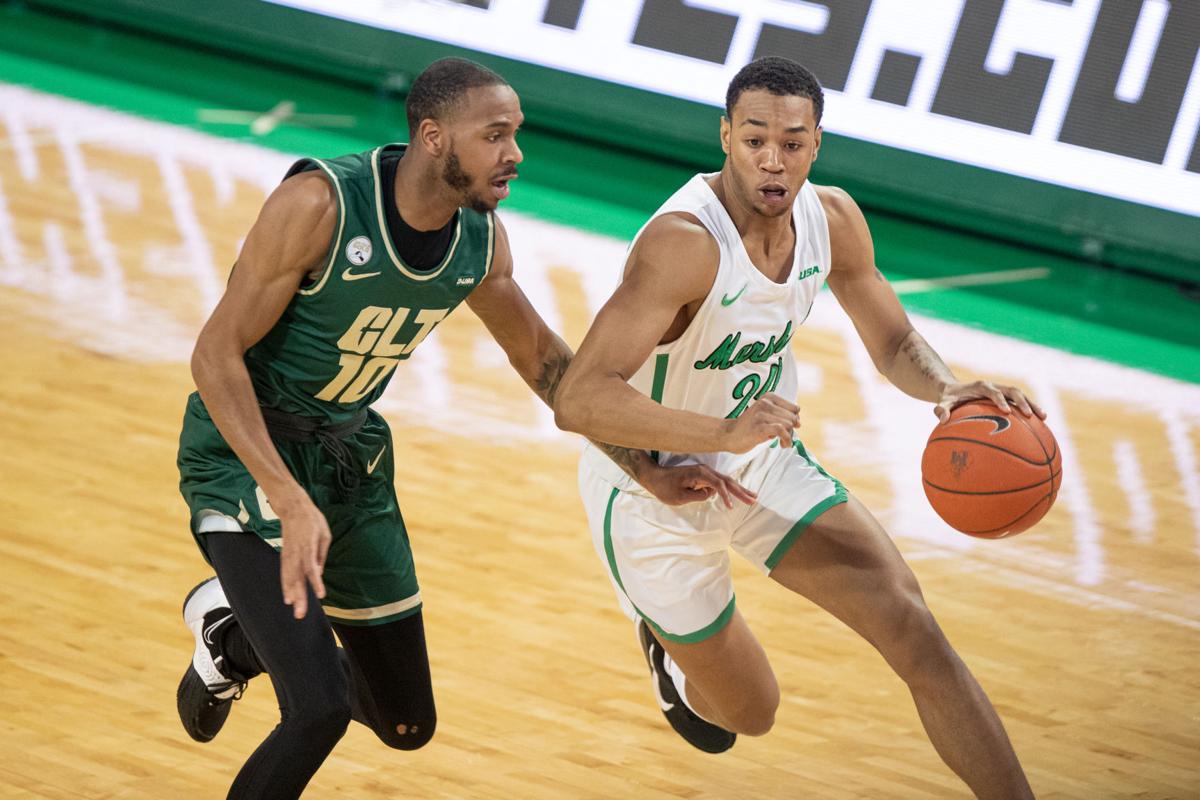 Marshall’s Taevion Kinsey (24) pushes up the floor against Charlotte’s Marvin Cannon (10) during an NCAA men’s basketball game on March 6 at the Cam Henderson Center in Huntington. 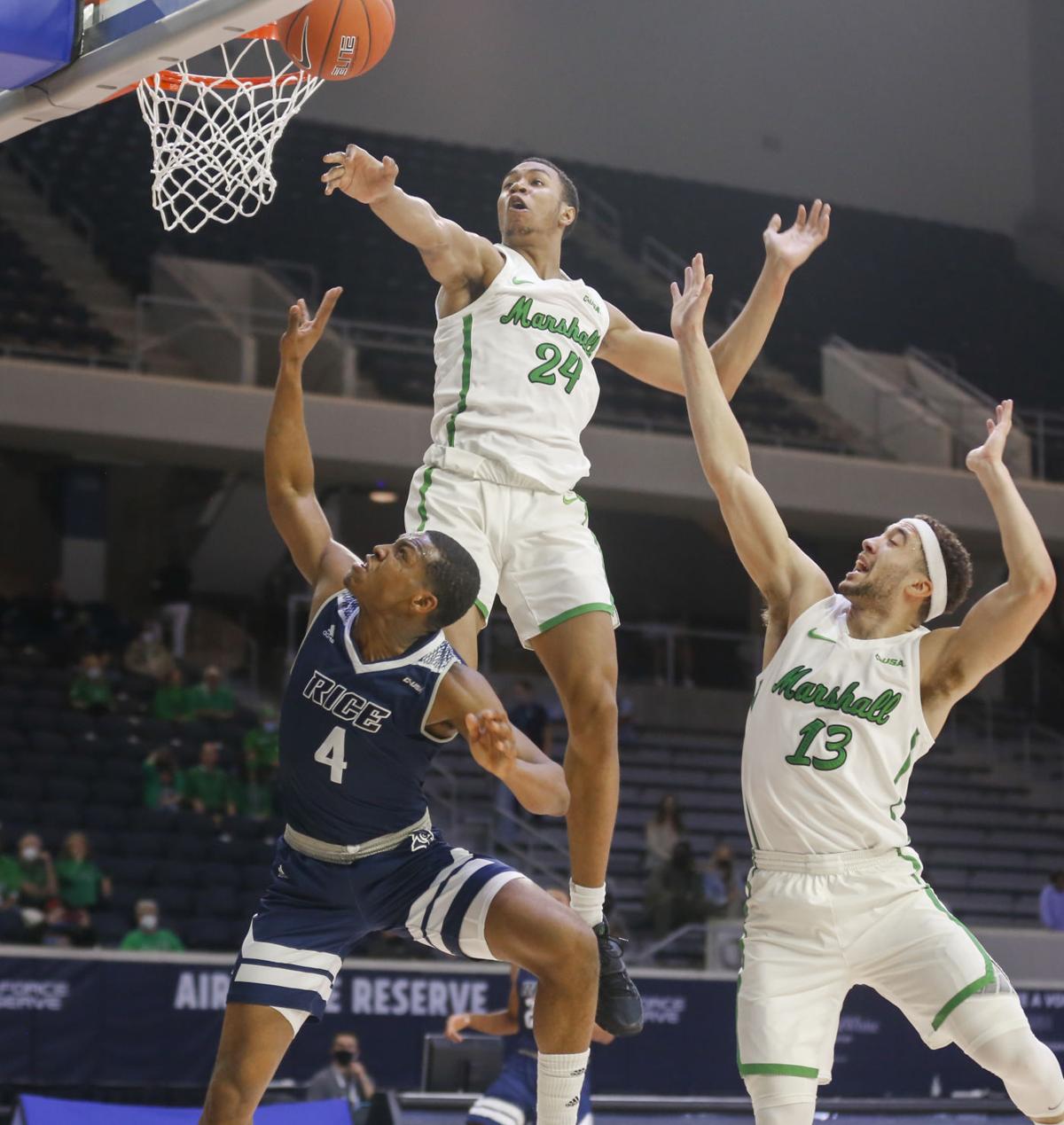 Marshall’s Taevion Kinsey (24) pushes up the floor against Charlotte’s Marvin Cannon (10) during an NCAA men’s basketball game on March 6 at the Cam Henderson Center in Huntington.

HUNTINGTON — One look at Marshall guard Taevion Kinsey reveals a noticeable change for the upcoming 2021-22 season.

Kinsey, the Thundering Herd’s leading scorer and an All-Conference USA first-team selection last season, has added some bulk to his frame in the early portion of the offseason.

“I definitely wanted to put on weight,” Kinsey said. “I wanted people to look at me and say, ‘That’s a senior. He’s grown. He’s matured body-wise, mentally.’ That’s moreso what I’m looking at this year. Last year, I had to step into a role being a leader and trying to score.”

Kinsey’s frame is wider with the biggest gains coming in his shoulders and arms, which will help him finish through contact at the rim.

Given his athleticism, it is a vital area of growth for someone with his skill set.

The 6-foot-5 Columbus native started strong in the 2020-21 season and, as the year went on, moved up the NBA Draft boards. Kinsey finished the year averaging 19.5 points and 6.2 rebounds per game while adding 3.0 assists.

Just as importantly, Kinsey’s 3-point average improved to 41.3% — a major area of work in the last two off-seasons.

“Hearing the feedback, it was pretty much about me having a consistent jump shot,” Kinsey said. “They were happy with me having shooting 40 percent (from 3-point range) last year, but it wasn’t enough because I didn’t shoot as many threes. Now, I’ve got to get them up.”

After the Herd’s season ended, Kinsey put his name in the mix to go to the NBA Draft, which helped him receive feedback from team personnel and NBA scouts.

Ultimately, Kinsey took the information provided and decided that returning to Marshall for the 2021-22 season was in his best interest — especially given the way the 2020-21 season ended in the first round of the Conference USA Tournament on his birthday.

“I really had a bad taste in my mouth from that loss,” Kinsey said. “We got beat in the first round, got beat by a team I felt we were better than. After going through the process of putting my name in and hearing feedback, talking to a lot of agents, I think it was my best decision to come back here and work on my game.”

Technically, Kinsey is still a junior due to the NCAA’s extra year of eligibility awarded to 2020-21 student-athletes. However, all indications are that this season will be his final season of collegiate basketball.

This season will bring about plenty of changes with Kinsey as the team’s top scoring option and most veteran starter.

The transfer of point guard Jarrod West to Louisville means that this is Kinsey’s team, and he is taking that responsibility seriously.

“This year, I’m trying to be a leader on and off the court,” Kinsey said. “Mentally, me looking at the game in that standpoint is big and tightening up all areas of the game that I need to work on is big.”

Following a practice in the early going of the summer period, Kinsey immediately went to teammates and asked if they were sticking around to get in some work on “The Gun” — a shooting apparatus that collects shots at the basket and sends passes back out to players.

Kinsey’s goal is to get the team on top of its game early and to finish strong, which is something they failed to do last season.

“For my senior year, I want to try to push that all the way through,” Kinsey said. “I feel like we had a great year at the beginning and then we started to low-key fall apart through COVID, shutdowns and things like that.”

The work in the offseason is what led Kinsey to the top of his team and Conference USA’s ranks, and he knows that work cannot stop if he is to reach his dreams of reaching the NBA.

That’s why he’s with assistant Cornelius Jackson as often as possible fine-tuning every aspect of his game.

“I’m working on my jump shot and staying after practice to take some movement out of my jumper, making it straight up and down — standard form,” Kinsey said. “It is just key things, small things to work on.

“I’m letting those small things build up so later on, I’m prepared for whatever moment comes.”