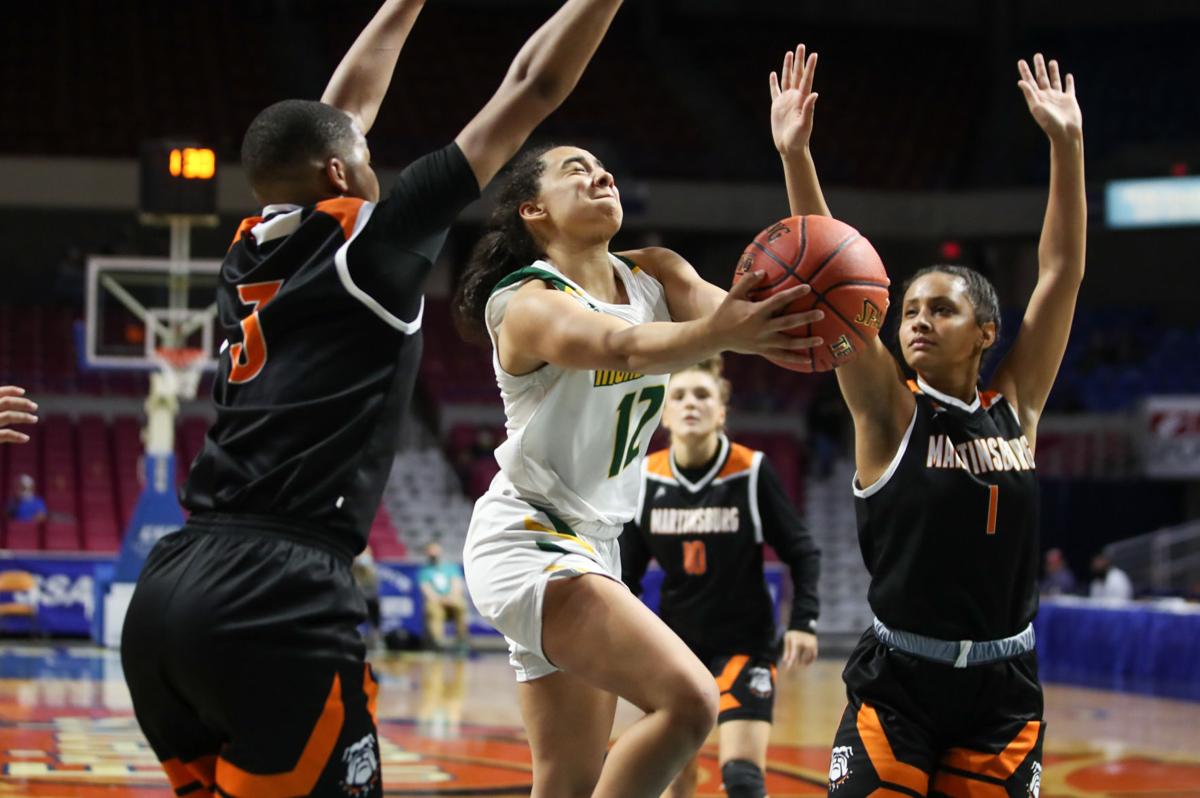 Huntington's Dionna Gray (12) is fouled as she drops in a layup against Martinsburg's Prosperity Stitt (3) and Olivia Mayer (1) during the Class AAAA West Virginia State Girls High School basketball tournament on Thursday, April 29, 2021, at the Charleston Coliseum and Convention Center. 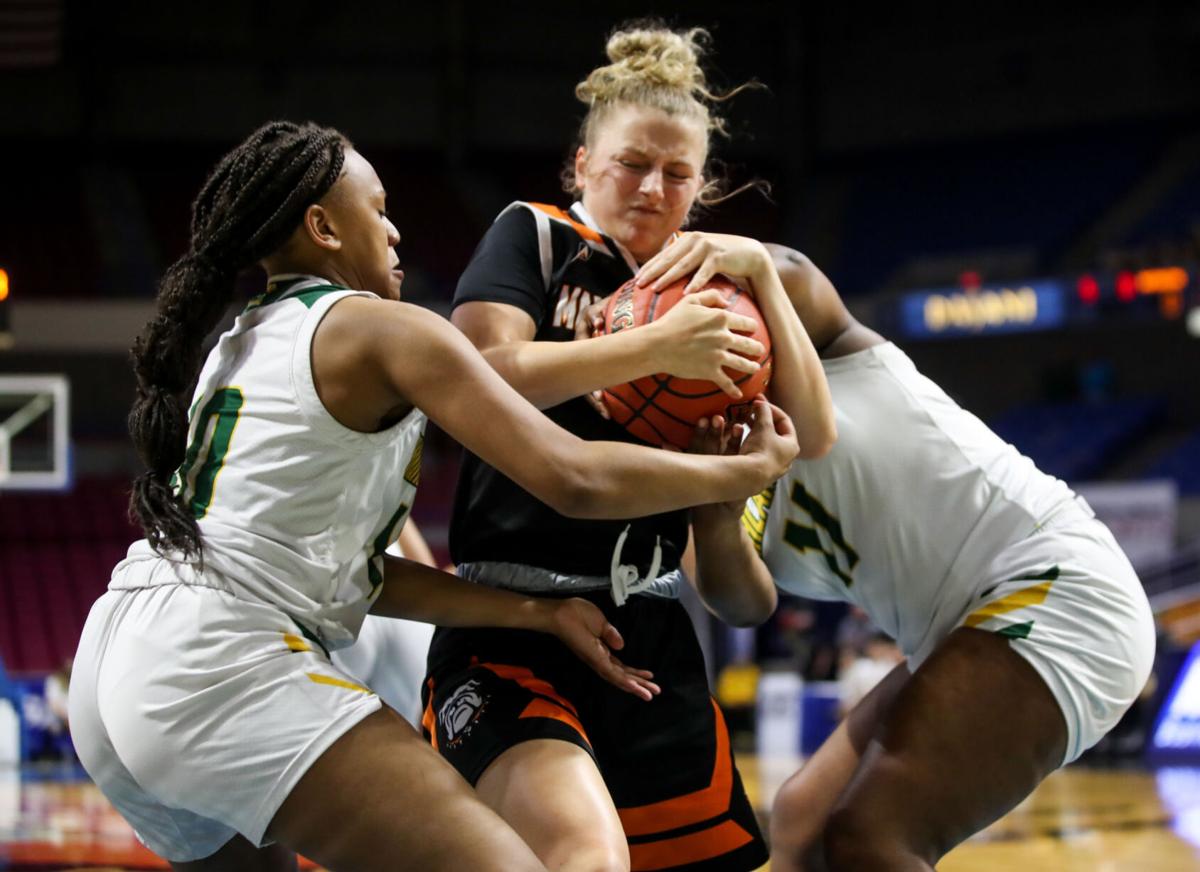 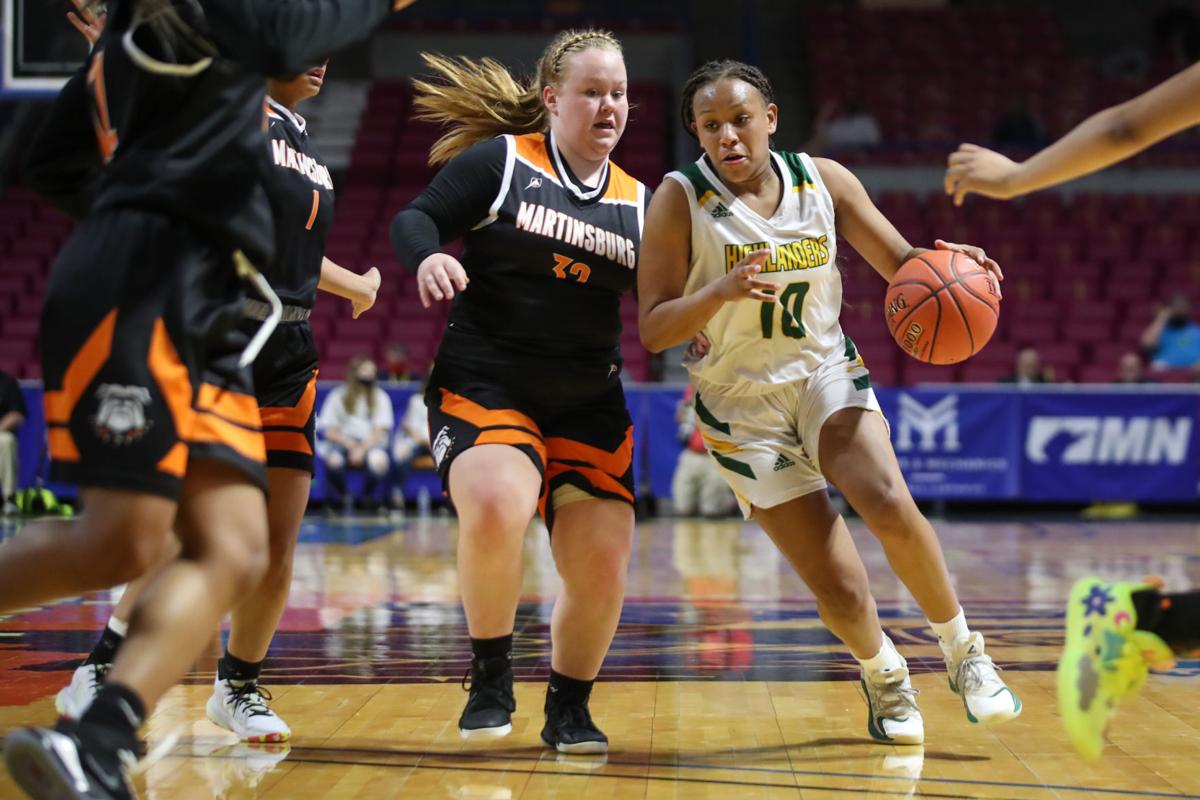 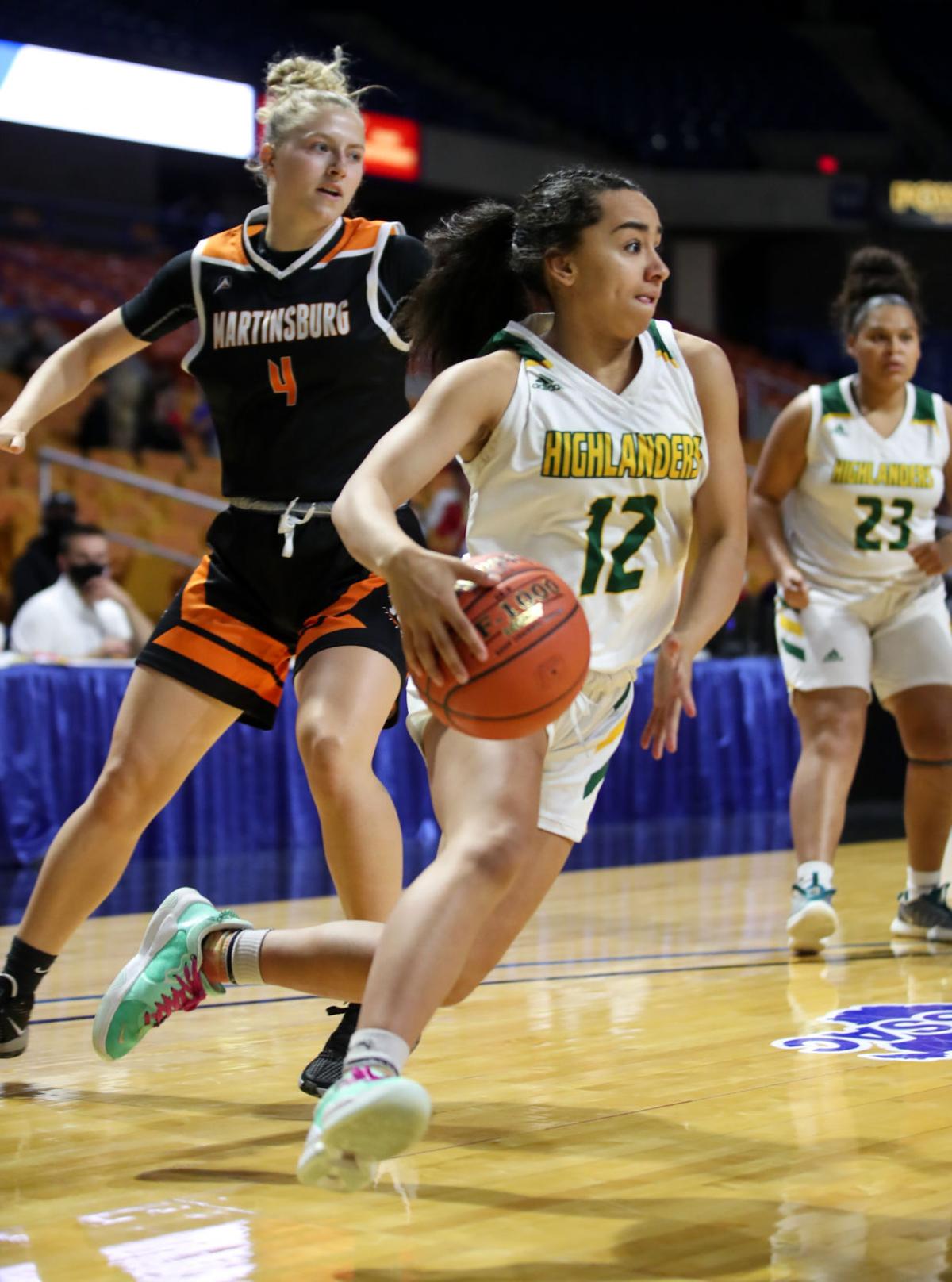 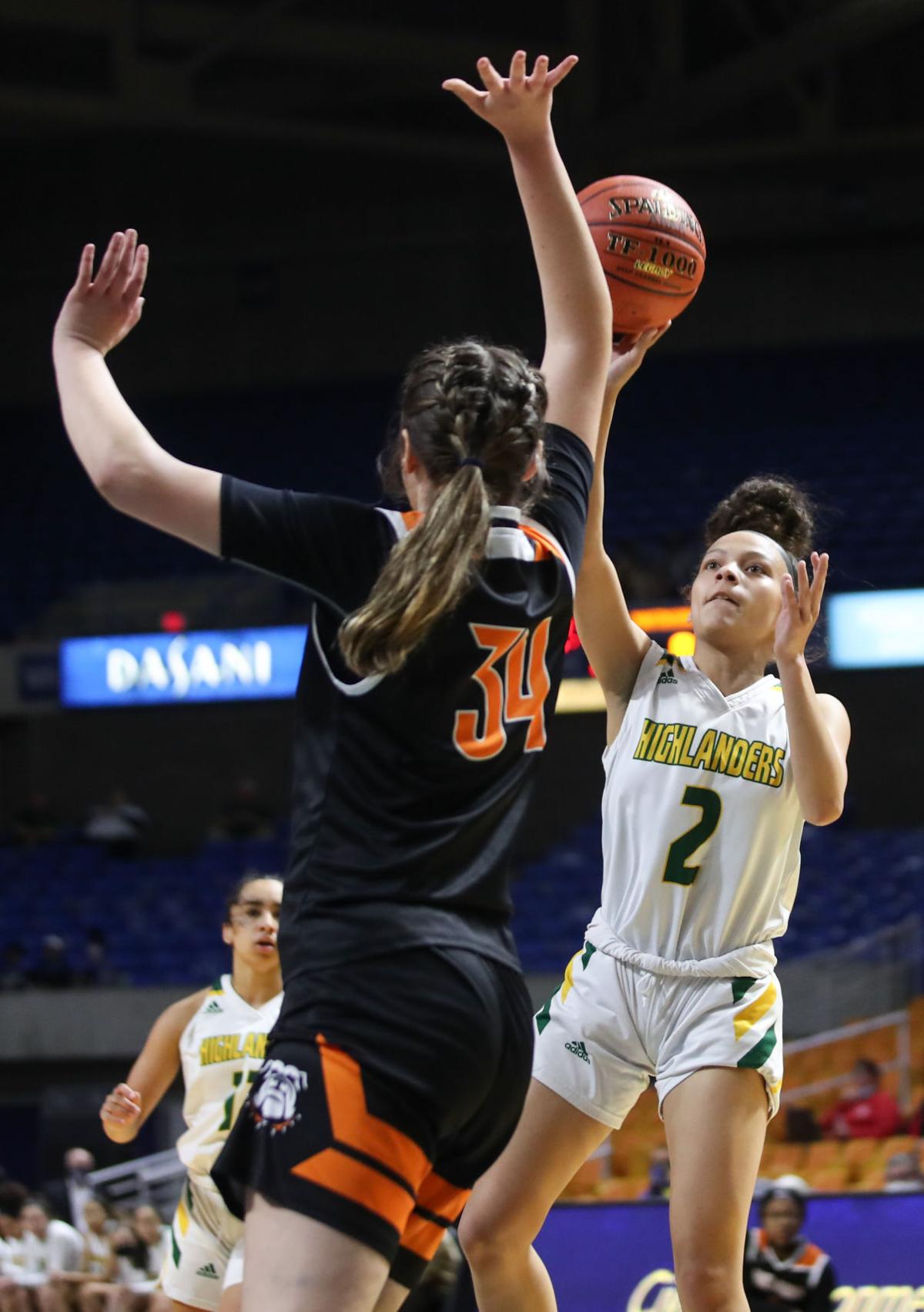 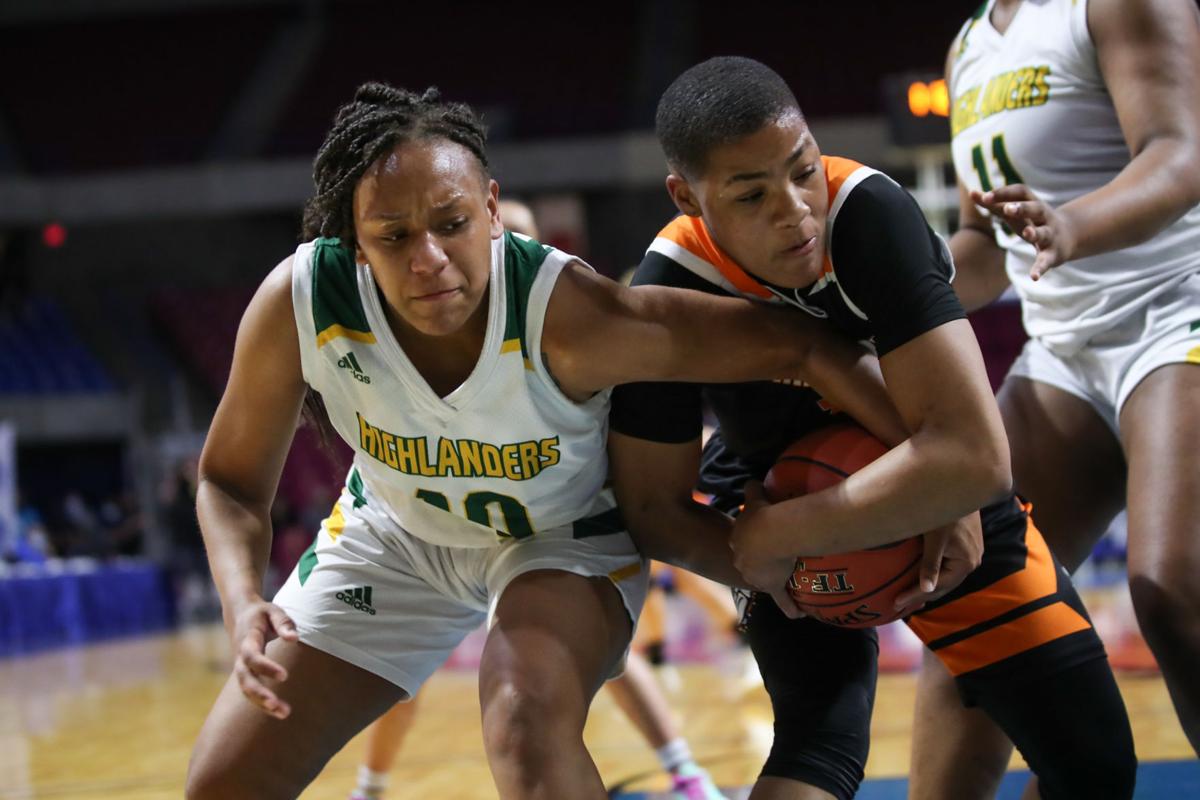 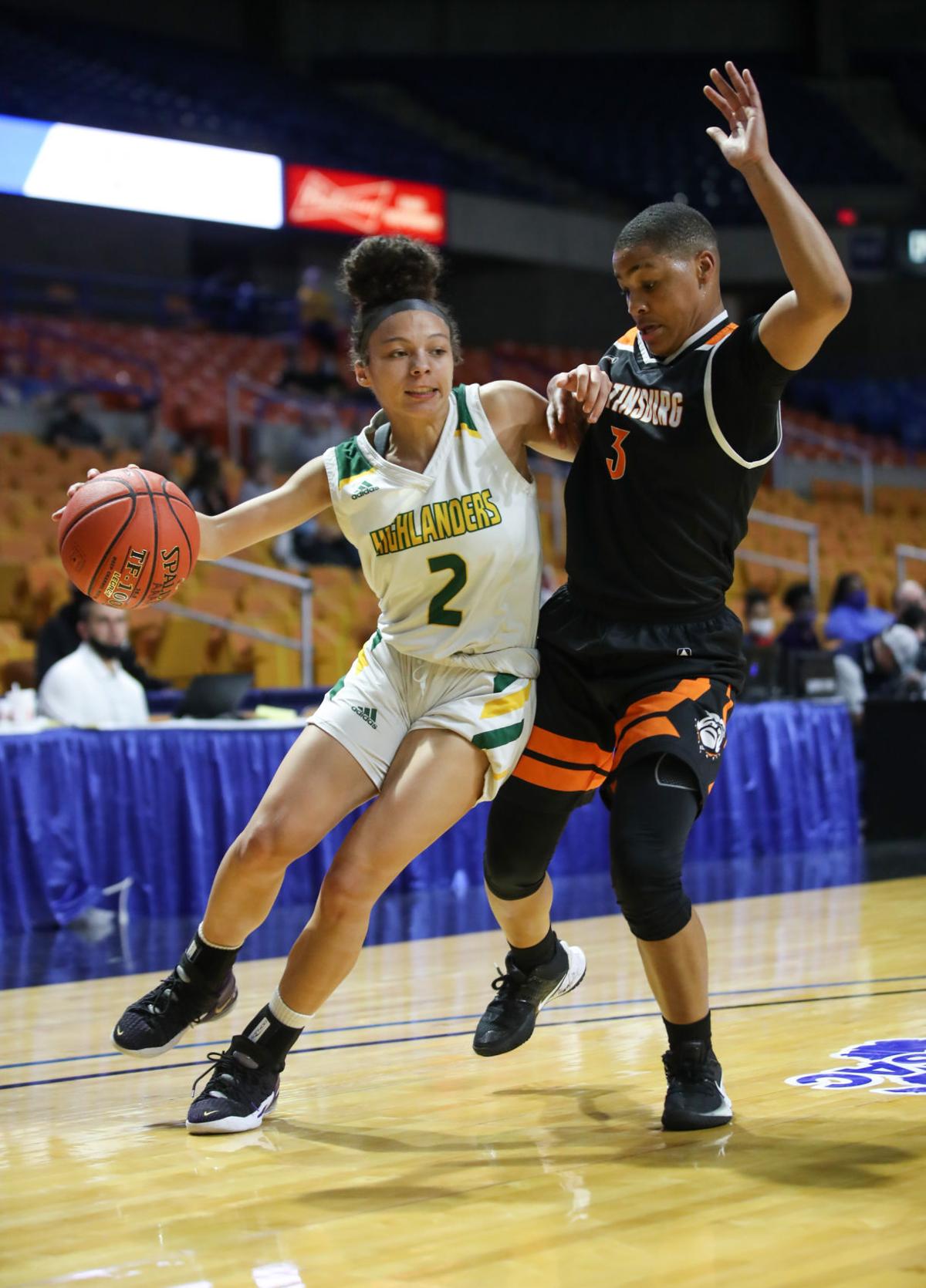 Huntington's Dionna Gray (12) is fouled as she drops in a layup against Martinsburg's Prosperity Stitt (3) and Olivia Mayer (1) during the Class AAAA West Virginia State Girls High School basketball tournament on Thursday, April 29, 2021, at the Charleston Coliseum and Convention Center.

CHARLESTON — When Huntington High guard Dionna Gray looked up at the halftime scoreboard and saw her top-ranked Highlanders trailing eighth-seed Martinsburg, there was plenty of room for frustration.

Instead, there was focus as Gray looked to help the Highlanders overcome a deficit and personally overcome a scoreless half.

Gray scored 26 points, with many coming under pressure late, as Huntington High fended off an upset attempt with a 54-49 win over Martinsburg in the Class AAAA quarterfinals at Charleston Coliseum & Convention Center.

“We were super-confident as the game went on,” Gray said. “There was never one point in the game when I was just down that I thought we weren’t going to come back into the game.”

Martinsburg (8-5) left the door open for the Highlanders by hitting only seven of 21 free throw attempts, which helped Huntington stay in striking distance.

With each free throw miss, Gray said she could see the pressure mounting on the Bulldogs, and she went into attack mode.

“As they started to get more nervous of keeping the lead, we just gained more confidence,” Gray said.

Huntington High coach Lonnie Lucas said that, despite his team falling behind by as many as nine points late in the third quarter, he knew his team was capable of turning things around.

“The mindset was that we were on track, we were going to be all right,” Lucas said.

After getting it back to a one-possession game and squandering several opportunities, Gray got the Highlanders over the hump with 1:29 left when she cut to the basket and took a feed for a three-point play that gave Huntington a 48-47 lead.

Martinsburg had a chance to take the lead but missed two free throw attempts, which gave the Highlanders possession.

Gray stepped to the line and knocked down a pair of free throws, which helped the Highlanders keep Martinsburg at arm’s length.

In the fourth quarter, Gray was eight of nine at the foul line, knocking down shots consistently under pressure.

“Stepping up to the line, I trusted my free throws,” Gray said. “I work on them all the time — all the offseason, working out and stuff, changing the ball in my hand. I felt confident in my shot. I knew I needed to step up.”

Martinsburg led 34-25 with 1:59 left in the third quarter following a three-point play from Prosperity Stitt, which had the Bulldogs sensing the upset.

However, Gray came back in the next minute and knocked down two 3-pointers that settled the Highlanders in for their comeback attempt.

Prior to Gray’s 3-pointers, the game was a rough-and-tumble affair, with neither team seeing success on the offensive end.

Martinsburg slowed the pace in a successful attempt to limit Huntington’s transition opportunities, keeping the Highlanders well below their average in taking a 19-16 lead to the half.

Once Gray knocked down a few shots, though, the Bulldogs sped their game up, forcing some looks without using much clock, which got the game into a quicker pace during the comeback.

“Martinsburg did a great job controlling the tempo of the game,” Lucas said. “That slowed us up and if we don’t run, we have trouble getting on track. The farther the game went, we got it sped up a bit, and the rest of it is history.”

Huntington jumped out to a 10-0 lead as Imani Hickman dominated inside early, but the Bulldogs scored the game’s next 12 points as the Highlanders went cold from the floor.

Much of the damage was done by Martinsburg’s Olivia Mayer, who found her range from the outside.

Mayer scored eight points in the second quarter and finished with 17 for the Bulldogs in the loss.

Hickman finished with 12 points and 21 rebounds for Huntington, who owned a 58-37 rebounding advantage.

Stitt added 11 points and 10 rebounds for Martinsburg, whose season ends at 8-5.