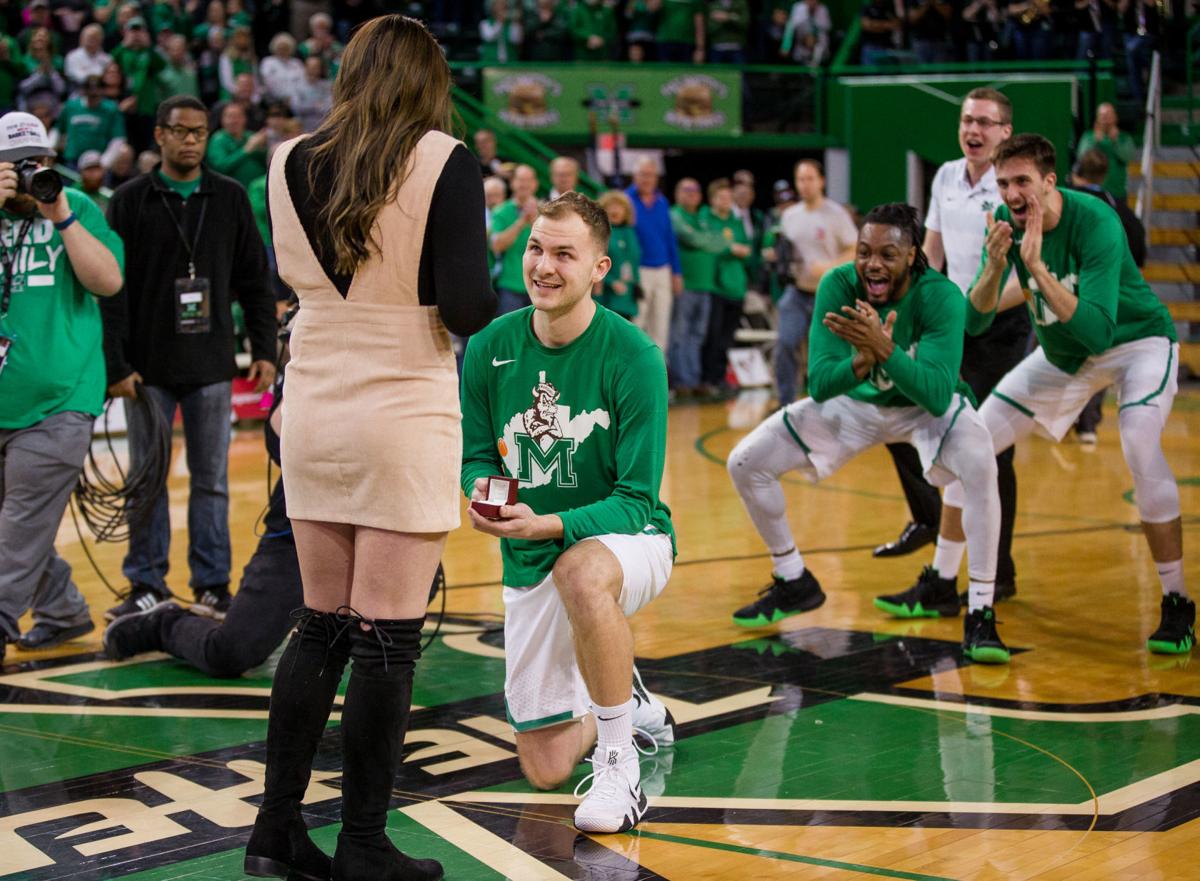 Marshall senior Jon Elmore drops to one knee as he proposes to his girlfriend Tori Dent before the Herd’s game against Florida Atlantic on March 9, 2019, at the Cam Henderson Center in Huntington. 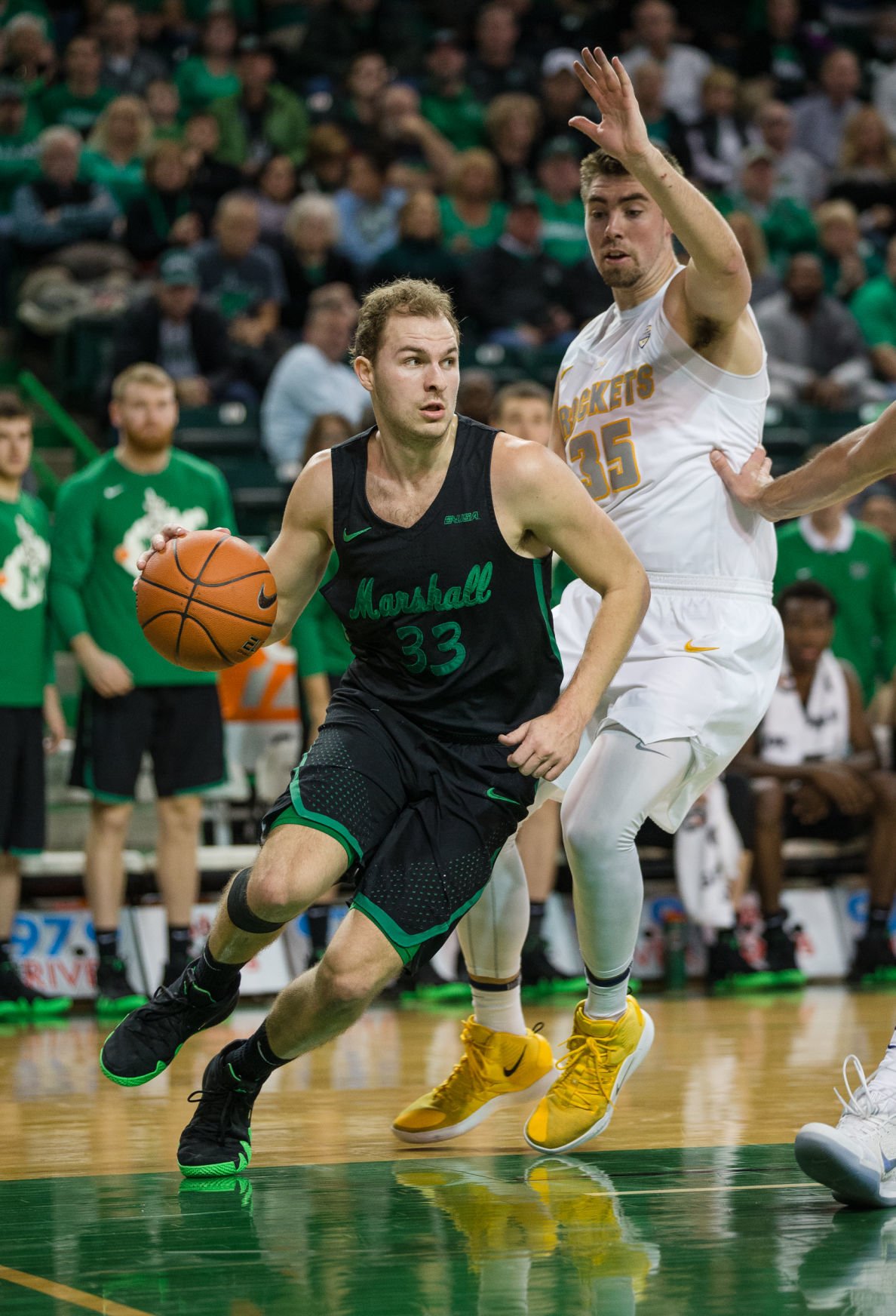 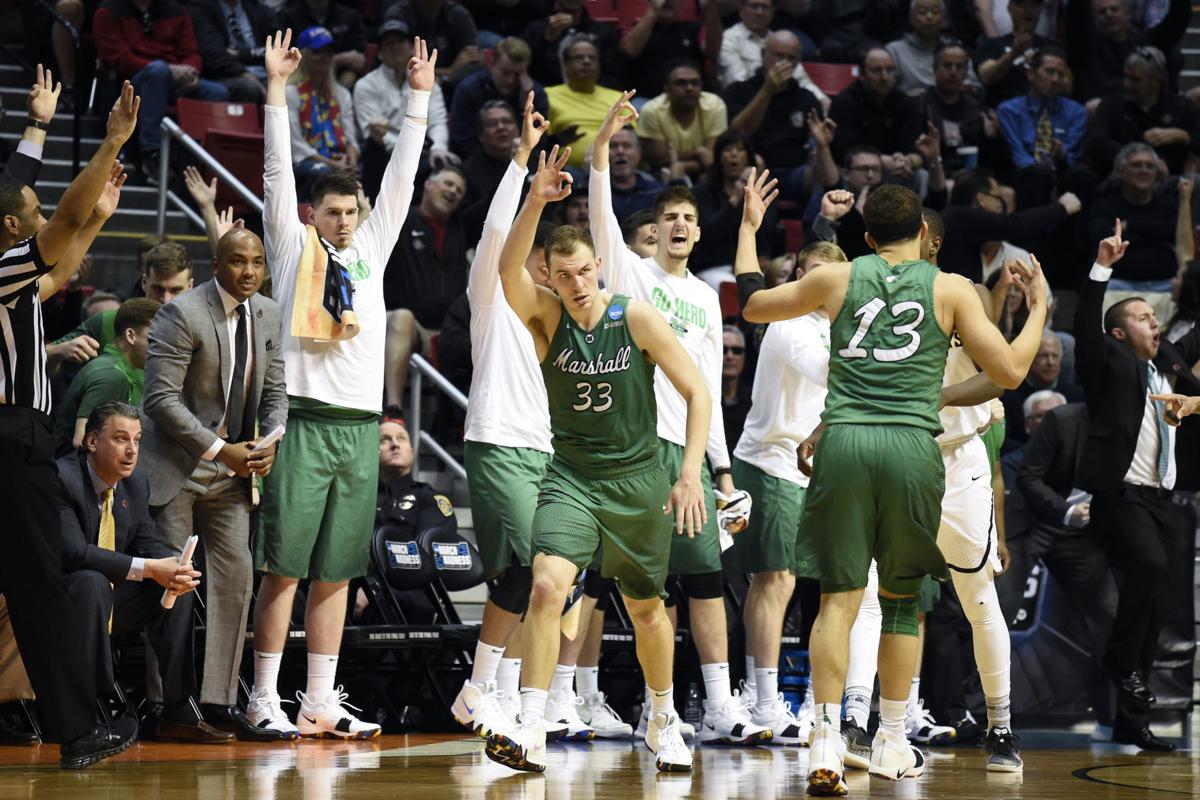 Marshall guard Jon Elmore (33) reacts after making a 3-point shot during the second half of a first-round NCAA men’s basketball tournament game against Wichita State on Friday, March 16, 2018, in San Diego. Marshall won 81-75 for the program’s first-ever NCAA tournament win.

Marshall senior Jon Elmore drops to one knee as he proposes to his girlfriend Tori Dent before the Herd’s game against Florida Atlantic on March 9, 2019, at the Cam Henderson Center in Huntington.

Marshall guard Jon Elmore (33) reacts after making a 3-point shot during the second half of a first-round NCAA men’s basketball tournament game against Wichita State on Friday, March 16, 2018, in San Diego. Marshall won 81-75 for the program’s first-ever NCAA tournament win.

HUNTINGTON — Since Jon Elmore was a kid, he dreamed of playing professional basketball.

The crowds, the competition, the prestige — he dreamt of it all as a West Virginia native who wanted to make it to basketball’s elite.

Months into his rookie season of professional ball in Italy, however, Marshall’s all-time leading scorer has seen his basketball dreams put on hold due to the spread of the COVID-19 coronavirus.

Now, Elmore — who is back home in Charleston — sits around and waits during a self-quarantine period, wondering when or if he will be traveling back to Italy to complete his rookie season with Capo d’Orlando in Italy’s Serie A2.

“I don’t think anybody could’ve scripted this,” Elmore said by phone on Wednesday. “This whole thing has been a roller coaster that nobody can see an end to so far. I just don’t know, man. This has just been a crazy rookie year. I didn’t see a lot of all this happening, to say the least.”

Elmore and his fiancé, Tori Dent, arrived back in the United States last week, having flown from Rome to Atlanta on March 10 before making their way back home to Charleston.

“They gave everybody a piece of paper to write down where you’ve been, they took a picture of you and then you got on the plane and took off,” Elmore said. “There was basically no testing whatsoever being done in the airports when we left or when we landed.”

For Elmore and Dent, the self-imposed quarantine period is precautionary. The two take their temperature twice daily and have shown no symptoms since returning.

Elmore said the decision to come home from Italy rather than stay and wait it out was a primary concern for him and Dent as they made a game plan for the best way to protect themselves from the coronavirus.

It was just over one year ago that Elmore proposed to Dent on Senior Day, making March 9, 2019, one of the most memorable days of his life.

On Jan. 2, that day was superseded when the couple found out Dent was pregnant. Their little girl set to make her debut in August.

That made their decision in coming home that much more crucial for Elmore.

“We didn’t know whether to stay in Italy and ride it out, or whether to get home and just be here in the States with doctors here,” Elmore said. “Our families were both concerned with her coming here and the virus starting to spread. When I made the decision to buy the tickets to come home, her health and the baby’s health was the main factor.”

It has all been part of a whirlwind 2020 calendar year for Elmore, which has included a switch in professional teams during his rookie season and one of the wildest experiences in basketball he’s ever gone through.

Less than two weeks after Elmore found out he would be a father, he was transferred from Pallacanestro Trieste — located in northeastern Italy — to Capo d’Orlando, which is an island town in Sicily located in the southernmost point of Italy.

The 24-year-old was just settling in with his new team and surroundings in Sicily when the coronavirus started to make a big impact on Italy.

“On the island, there weren’t any cases — maybe two, but even those were two and a half hours from where we lived in Capo d’Orlando,” Elmore said. “The people there were living regular, everyday life. But when we got ready to play an away game, one of the away games was in the Lombardi Region, and that’s where everything started to go crazy.

“It was, ‘Were we going to fly there? Are we going to stay in that area?’ That’s where questions got raised and games even got rescheduled. I was lucky to be that far south and away from it all, but it was spreading like crazy and many of our games were in northern Italy, so it got really sketchy for a bit.”

The league took precautions to ensure the safety of its players, such as closing the doors on scheduled games — something Elmore said was the weirdest thing he’s ever experienced in basketball.

“It was literally five guys on the court, the guys on the bench and the coaching staff,” Elmore said. “That’s literally the only people there for you in the gym. You had to rally around each other and create your own momentum. It was almost like a pickup game in the middle of the summer with your friends in Huntington. There’s nobody there. You’re warming up and looking around and there’s just nothing.”

With basketball now on hold for the foreseeable future, there are more questions than answers for Elmore.

He’s not sure whether his season in Italy will be canceled, or whether at some point he will be called to fly back over to Italy to finish out his contractual obligation to Capo d’Orlando.

That uncertainty includes not knowing when his next paycheck will come — another wrinkle in an unprecedented time in the life of an international professional athlete.

“From what I understand, nobody has any idea,” Elmore said. “I think all payments, for the most part, are frozen. I think everybody is owed up until they left. My last full month there was February, so I’ll get paid through February. But, going forward, everything is frozen, so that is a big concern for pro players — are they going to get the rest of the money on their contract?

As of now, the suspended Serie A2 season still has two months’ worth of games remaining. Elmore said he will head back to Italy to honor his contract, if the decision is made to resume the season.

“If the season does start back, I’ll be back, because, number one, I signed the deal and, number two, they are paying me to play and I made that commitment,” Elmore said. “It’s definitely a tough decision, though.”

As normal as it can be

During the uncertain times, Elmore said he is happy to be home — a place he hadn’t been in seven months. Being home brings some normalcy to a time that has been anything but normal for anyone currently in the United States under orders of social distancing to curb the spread of the virus.

For Elmore personally, however, the self-quarantine does not keep him away from being able to work on his basketball game, thanks to a home gymnasium in his basement, which includes an NCAA-certified wood court and three 10-foot NCAA rims.

“To be so quarantined in my house, it isn’t so bad because I’ve got some free weights down in the basement and the basketball court down there to work out,” Elmore said. “If I didn’t have that, I’d for sure lose my mind because I can only play so many hours of Fortnite a day.”

Elmore’s collegiate career with Marshall was a storybook as he rewrote the record book and helped Marshall capture its first-ever NCAA tournament win.

Now into his professional career, Elmore feels as if his rookie season has been one for the books as well, given the wild journey that has taken place.

The only thing Elmore has left wondering now is whether that chapter on his rookie season has closed or if there is more to still be written.

No matter what, Elmore knows that, one day, it will be one heck of a story worth sharing with his little girl.