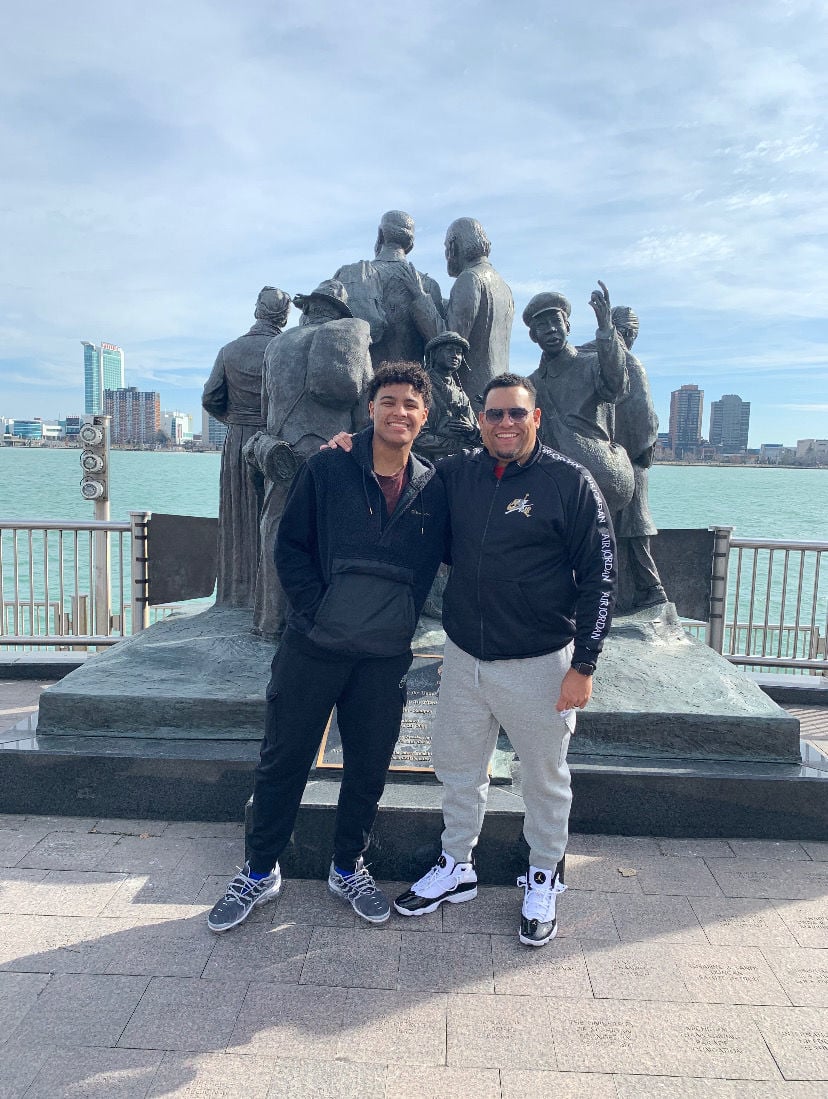 Jermaine Wiggins, Jr., left, and his father, Jermaine Wiggins, Sr., stand together at the Gateway to Freedom monuments, located at Hart Plaza in Detroit, Michigan.On Tuesday, the younger Wiggins received a scholarship offer from Marshall’s football program where his dad played in 1994 and 1995.

Buy Now
Jermaine Wiggins, Jr., (left) and his father, Jermaine Wiggins, Sr., (right) stand together at the Gateway to Freedom monuments, located at Hart Plaza in Detroit, Michigan.
On Tuesday, the younger Wiggins received a scholarship offer from Marshall’s football program where his Dad played in 1994 & 1995.

Jermaine Wiggins, Jr., left, and his father, Jermaine Wiggins, Sr., stand together at the Gateway to Freedom monuments, located at Hart Plaza in Detroit, Michigan.On Tuesday, the younger Wiggins received a scholarship offer from Marshall’s football program where his dad played in 1994 and 1995.

Buy Now
Jermaine Wiggins, Jr., (left) and his father, Jermaine Wiggins, Sr., (right) stand together at the Gateway to Freedom monuments, located at Hart Plaza in Detroit, Michigan.
On Tuesday, the younger Wiggins received a scholarship offer from Marshall’s football program where his Dad played in 1994 & 1995.

HUNTINGTON — On Tuesday, Marshall gave a scholarship offer that not only looked to its future, but rekindled its past, as well.

“I was shocked whenever they told me,” Wiggins said. “I’m just truly blessed to receive an offer from them.”

Marshall is the first official FBS offer for Wiggins, which the younger talent said was special in itself.

“It’s kind of crazy that it’s where my dad played,” Wiggins said. “My dad has been telling me how great the school is. When he was there, he loved it. After I got the offer, he took me online and showed me around campus and the football field.”

At 6-4, 230 pounds, the younger Wiggins has already exceeded his father’s size and has the frame to add bulk, as well.

Perhaps the most intriguing question surrounding him will be what side of the football he lines up on in college.

Not surprisingly, tight end is the spot he’s the most experienced with, but his flash on the defensive side of the football is also one that is turning heads and could land him several offers as a defensive end.

Even his father doesn’t know where his son will line up in college.

“My dad has asked me that a bunch of times — ‘What do you like more: offense or defense?’ — and right now, I feel like I’m dominant at both positions that I play,” Wiggins said. “Last year was my first year actually playing defense as a D-lineman.”

The younger Wiggins spoke about the similarities between the positions and how the offensive principles helped him defensively in his first season on the edge.

“At tight end, you have to use your hands and blocking, you have to get inside and get rid of people, too, and use your speed,” Wiggins said. “I feel like that plays a huge factor (defensively) and really helps me a lot, actually.”

In looking at film of Wiggins, he flashes on both sides, but the film is impressive on the defensive side, considering it is only his first year at the position.

With his size and athleticism, the offers are bound to come in from FBS schools, but Marshall being the first FBS offer gives the Herd a leg up.

Another advantage that Marshall has in recruiting Wiggins Jr. is that Herd offensive line coach and recruiting coordinator Greg Adkins coached Jermaine Wiggins Sr. during his collegiate career.

Adkins was tight ends and line coach for the Herd in 1994 and 1995 before moving on to Georgia when Marshall head coach Jim Donnan got the job with the Bulldogs.

Under Adkins’ guidance, Wiggins led Marshall with 54 catches for 681 yards and four touchdowns in 1995.

Just as Adkins went to Georgia, so, too, did the elder Wiggins, which led to a successful stint with the Bulldogs that he parlayed into a tenured NFL career that saw him win a Super Bowl with the New England Patriots in 2001.

Now, Wiggins Sr. is helping his son navigate the college recruiting world in quite possibly the most unique time ever seen for recruiting in the college football world.

The younger Wiggins said he is going to weigh all options in recruiting and looks forward to visiting Marshall, as well.

“I’m just trying to get as many as I can and figure out what schools have the same interest as what I have,” Wiggins said. “Once all this coronavirus stuff is over, I can’t wait until I get the chance to go down there, see the school and meet everyone in person.”

Wiggins was not the only Central Catholic player to get an offer from the Herd this week.

In addition to Wiggins receiving the offer for the Class of 2021, the Herd extended an offer to 2022 Central Catholic quarterback Ayden Pereira.