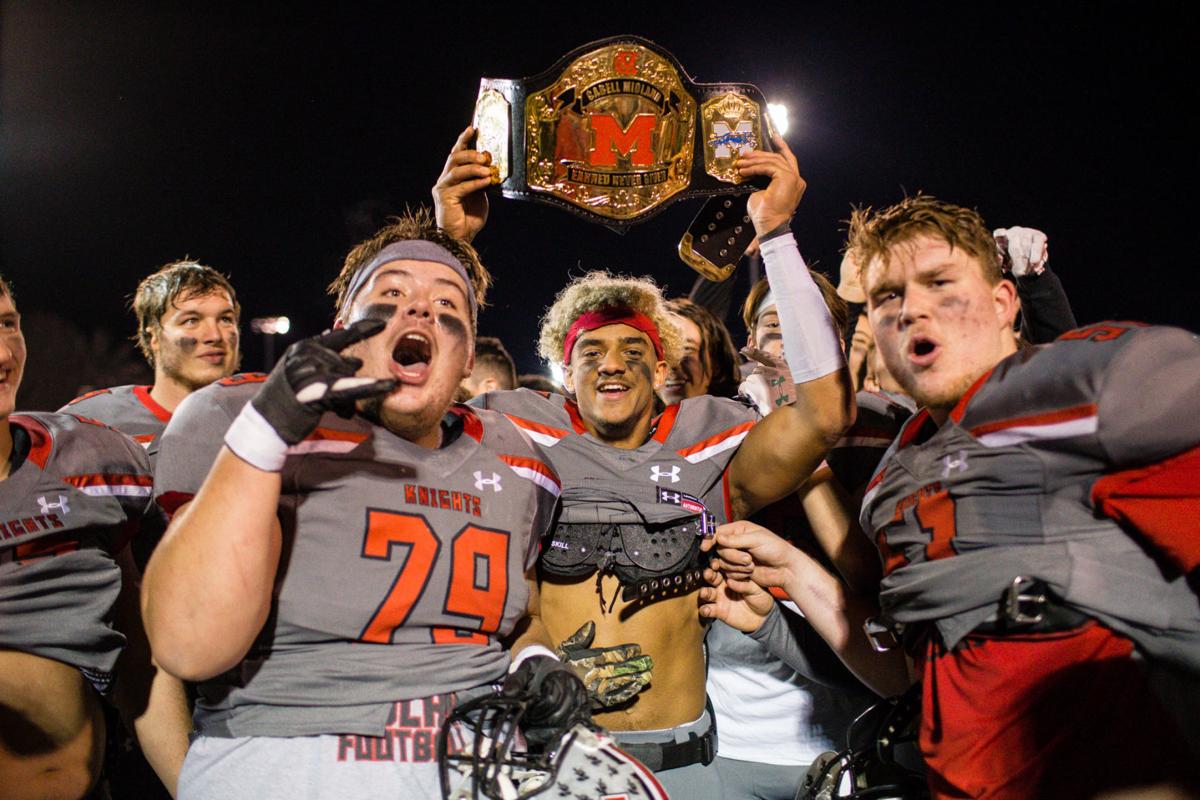 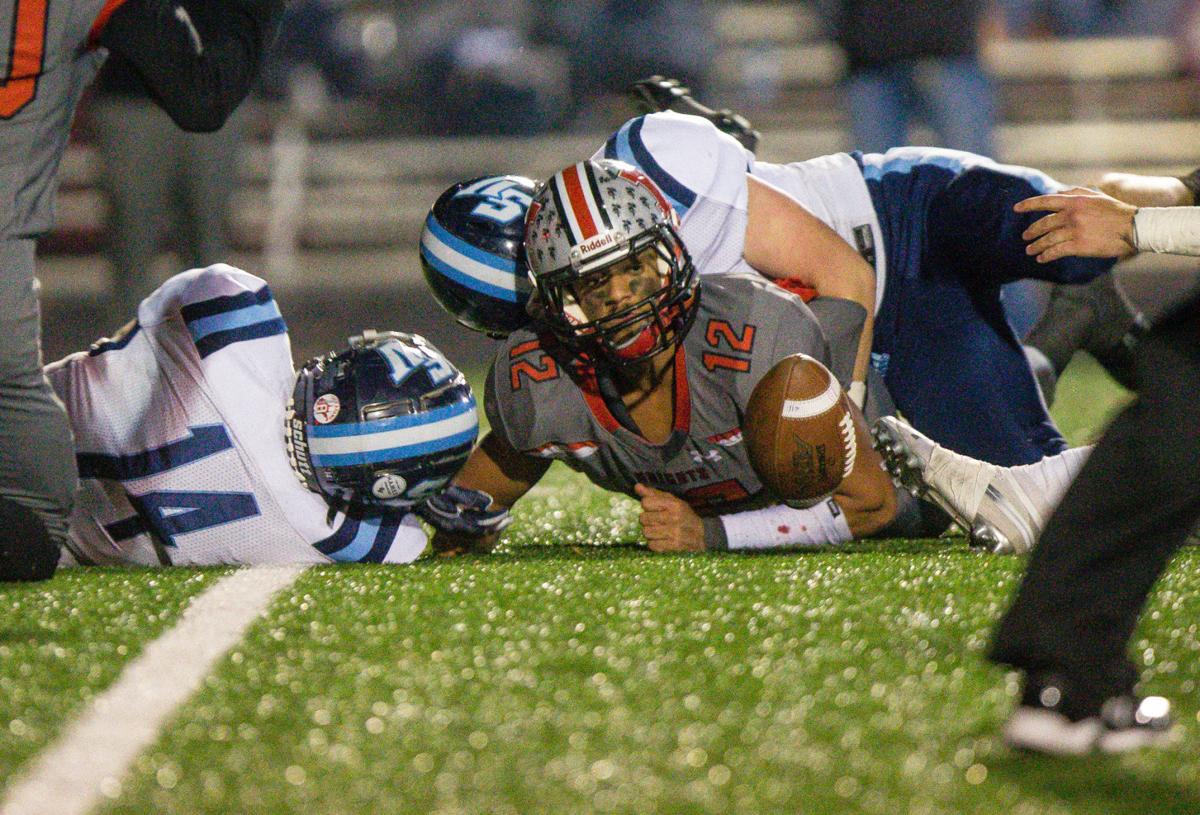 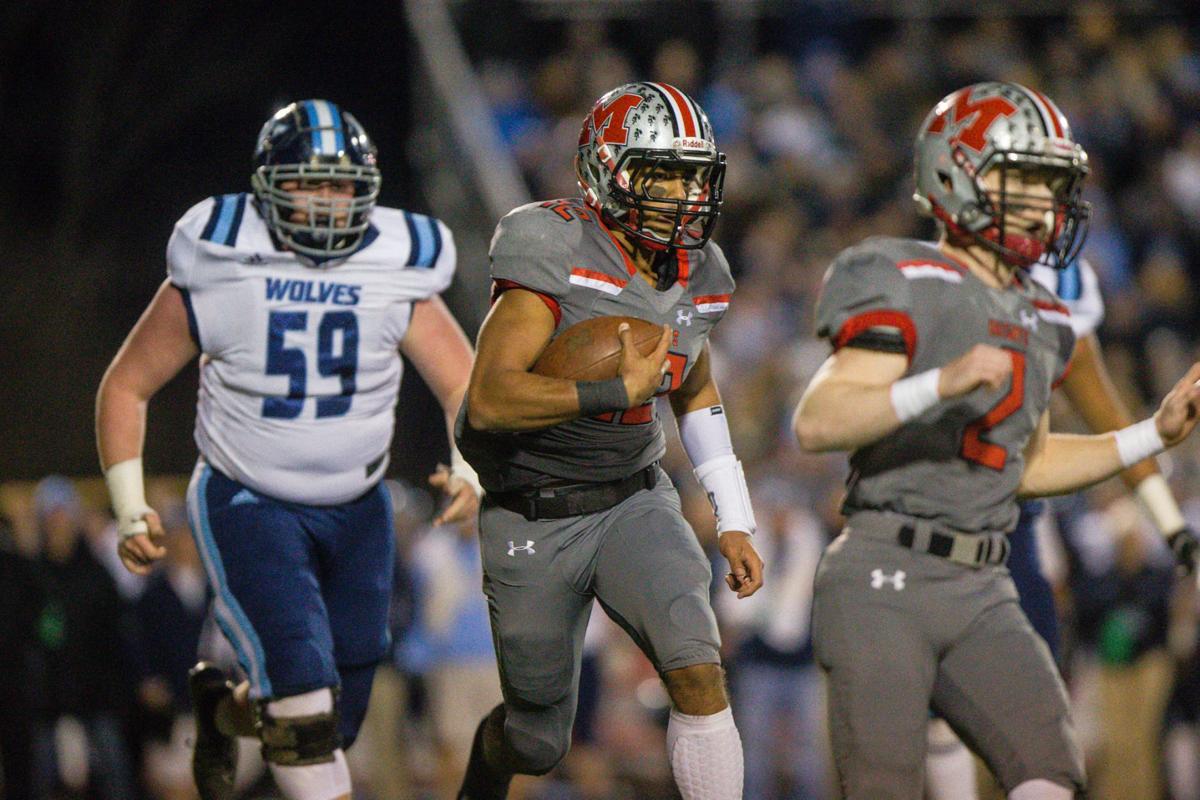 Cabell Midland quarterback J.J. Roberts (12) rushes around the edge on a keeper as the Knights take on Spring Valley during the semifinals of the West Virginia Class AAA football playoffs on Friday, Nov. 29, 2019, at Cabell Midland High School in Ona. 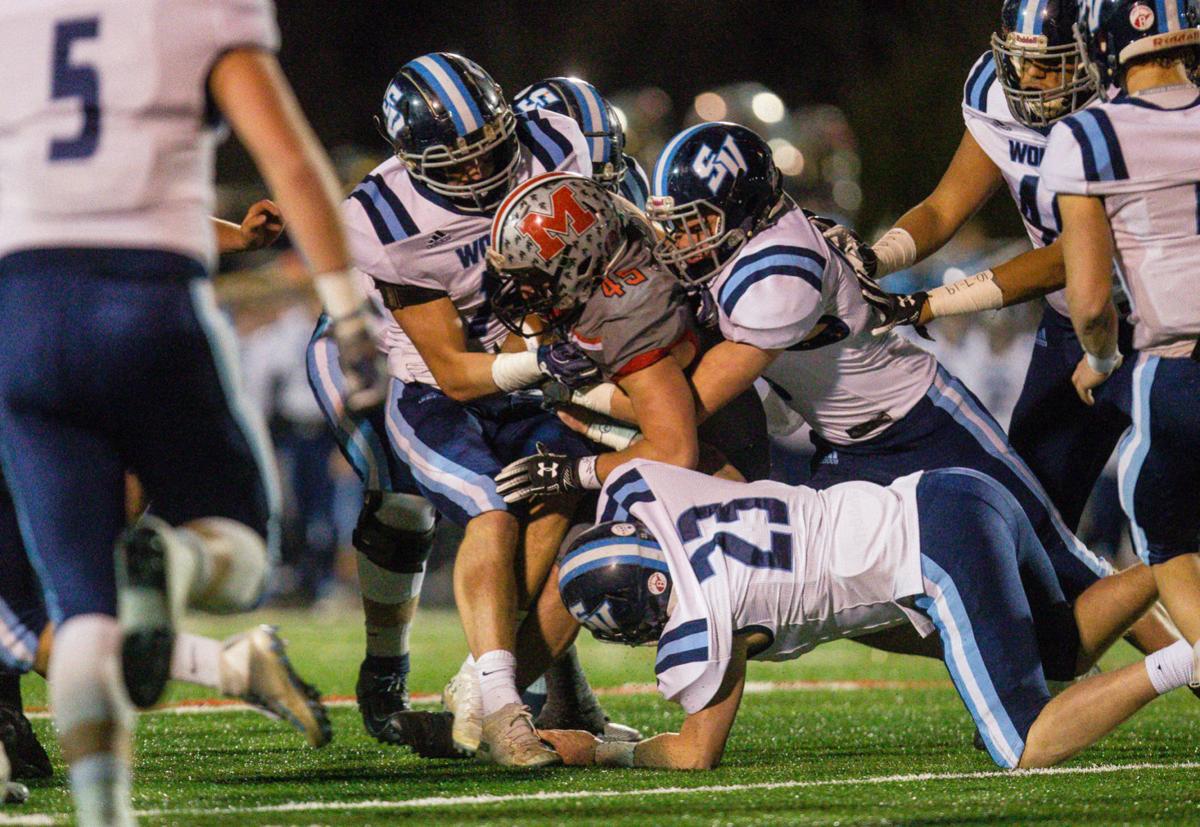 Cabell Midland running back Jakob Caudill (45) is tackled by a host of Spring Valley defenders during the semifinals of the West Virginia Class AAA football playoffs on Friday, Nov. 29, 2019, at Cabell Midland High School in Ona.

Cabell Midland quarterback J.J. Roberts (12) rushes around the edge on a keeper as the Knights take on Spring Valley during the semifinals of the West Virginia Class AAA football playoffs on Friday, Nov. 29, 2019, at Cabell Midland High School in Ona.

Cabell Midland running back Jakob Caudill (45) is tackled by a host of Spring Valley defenders during the semifinals of the West Virginia Class AAA football playoffs on Friday, Nov. 29, 2019, at Cabell Midland High School in Ona.

ONA — Cabell Midland’s defense outscored Spring Valley 14-0 Friday night and that only begins to tell the story of the unit’s dominance.

The No. 2 Knights shut down the third-seeded Timberwolves’ vaunted rushing attack and continually provided Cabell Midland’s offense opportunities in a 31-0 victory in the Class AAA high school football semifinals at the Castle. Spring Valley gained 117 yards rushing and 72 passing.

The triumph sends the Knights (13-0) into their first state championship game since 2012 at noon Dec. 7 against the winner of Saturday’s other semifinal featuring No. 1 Martinsburg (13-0) and No. 4 Parkersburg South (12-1).

“We just squeezed down and took away the run,” said defensive back Jackson Fetty. “Then they started to pass and we had four picks.”

The game was not a blowout until deep into the second half. Cabell Midland established its dominance early, but went into halftime with just a 3-0 lead, thanks to a 29-yard field goal by Cameron Grobe with 9:36 left in the second quarter.

The Knights stopped the Timberwolves (11-2) on three plays to open the game, then followed with a 12-play drive, all runs, from their own 26 to the Spring Valley 20, where they faced third and 4. Cabell Midland then went to the air for the first time and Brody Brumfield intercepted J.J. Roberts at the 7 to end the threat.

The Timberwolves went three-and-out again, punting to the Cabell Midland 22. Three plays later, Jakob Caudill broke loose on a 56-yard run to the Spring Valley 18 where Brumfield made a touchdown-saving tackle. Three plays and five yards later, Grobe’s field goal made it 3-0.

“We moved the ball well in the first half, but we stopped ourselves,” Cabell Midland coach Luke Salmons said. “We made some mistakes, but when everyone started executing we were good. The option is tough to stop when you execute it well.”

Spring Valley drove to the Knights 35, picking up its initial first down on an interference penalty with 1:30 left until halftime. The drive ended, though, when Chandler Schmidt intercepted a Nate Ellis pass at the 8 on the final play of the half. Schmidt played for the first time since the season opener in which he broke his ankle.

“They stood me up at first, but I just powered through,” Fetty said. “I couldn’t have done it without the offensive line.”

The Timberwolves sprung to life on their next drive, picking up first downs on four consecutive plays, including a 43-yard pass from Ellis to Zane Porter to the Cabell Midland 22. Spring Valley drove to the 8 and settled for 26-yard field goal attempt by Porter, but the kick sailed wide.

“We’ve got to come away with points,” Spring Valley coach Brad Dingess said. “That’s something that has to happen. We didn’t, and it put us in a situation where we didn’t play football the way we like it.”

“They were fast, aggressive and did a good job defensively all night,” Dingess said if the Knights. “It just seemed like we were one block away sometimes but we couldn’t sustain anything.”

The Knights, who gained all 294 of their yards on the ground, took advantage, putting together another lengthy scoring drive. Caudill’s 1-yard TD run around left end capped a 13-play, 69-yard drive to extend the lead to 17-0 with 7:40 left to play.

Linebacker Palmer Riggio made it 24-0 just 31 seconds later when he returned an interception 46 yards for a touchdown. Roberts followed with a 52-yard interception return to set the score.

Spring Valley takes on Cabell Midland during the semifinals of the West Virginia Class AAA football playoffs on Friday, Nov. 29, 2019, at Cabe…