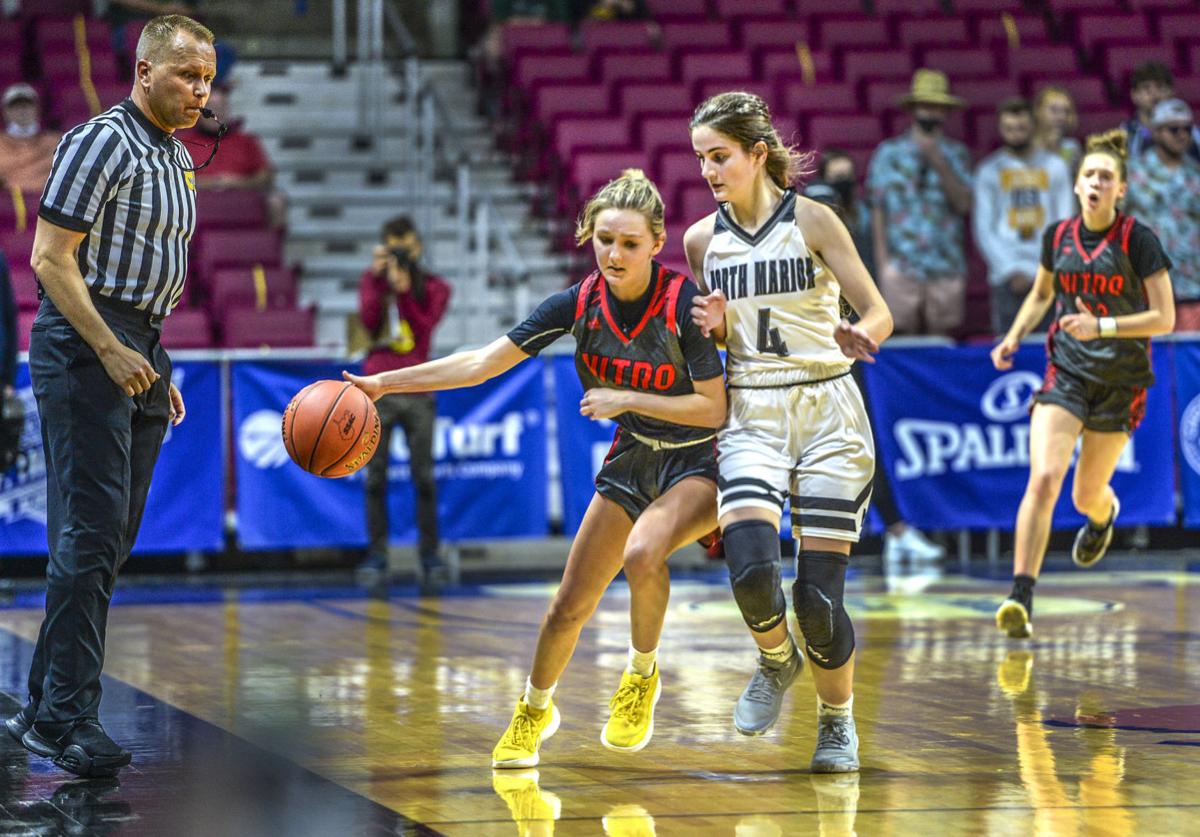 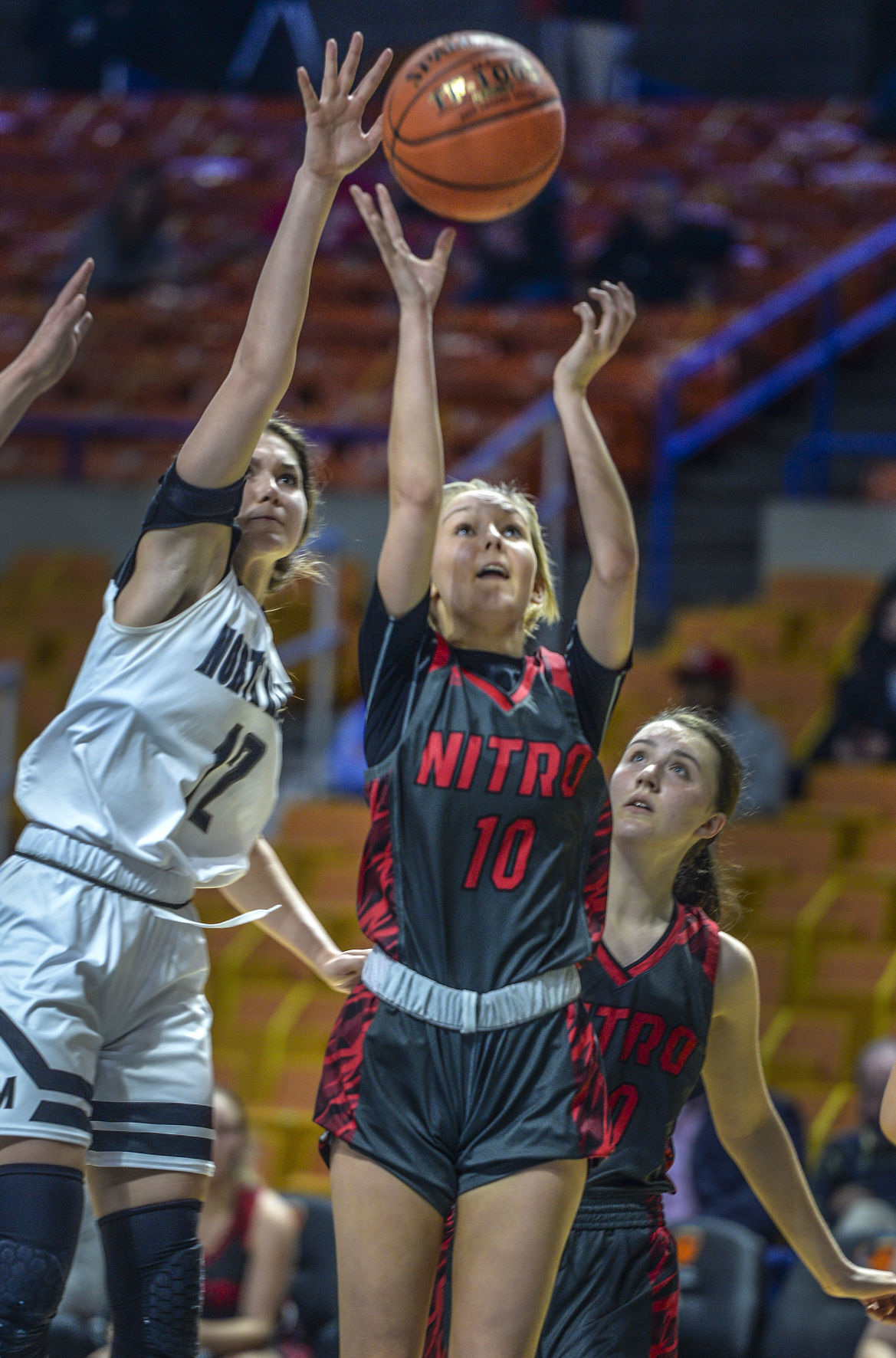 Nitro's Taylor Maddox (10) shoots in front of North Marion's Katlyn Carson (12) during the Wildcats' win over the Huskies.

Nitro's Taylor Maddox (10) shoots in front of North Marion's Katlyn Carson (12) during the Wildcats' win over the Huskies.

North Marion knew it was going to have to deal with Baylee Goins, Nitro’s All-State senior point guard and a top state Player of the Year candidate.

But what the Huskies might not have known was that Taylor Maddox could be just as dangerous.

It’s the first title game appearance since 2001 for Nitro (17-1), which captured its 14th straight win and halted the two-year, 28-game win streak of the Huskies (14-1), who were seeded No. 2 in the Class AAA field. The third-seeded Wildcats take on Fairmont Senior or Logan in Saturday’s 5:30 p.m. title game.

“North Marion is obviously a great team,’’ said Nitro coach Pat Jones, “and they’re here for a reason and they’re undefeated for a reason. But these girls came out and didn’t worry about the name on the other team’s jersey. They came out and played Nitro basketball like we’ve played for 17 of the 18 games this year.’’

Nitro thus becomes the first Kanawha Valley team to reach the girls state finals in any class since Sissonville took the Class AA crown in 2015. The Wildcats’ only other trip to the title game was a 41-38 loss to Capital and Alexis Hornbuckle in 2001.

Maddox woke up after a quiet and scoreless first quarter, helping Nitro ease into a 30-22 lead at halftime with nine second-quarter points.

“I don’t know what got into her today,’’ Jones said, “but I got into her at the end of the first quarter. I told her, ‘I don’t know if you got caught in traffic or if you’re on vacation, but I need you here the rest of this game.’ And she played an outstanding game.

“And I can’t say enough about [Goins]. Night in and night out, she’s getting double-teamed, triple-teamed and she just stays so composed. She doesn’t get frustrated. She doesn’t run her mouth. She doesn’t do anything crazy.’’

Every time it seemed like the Huskies were going to put on a charge — they got within one point in the third period — either Maddox gunned in another 3 or Goins solved North Marion’s 2-2-1 pressure defense with a long pass for a layup or weaved her way to the basket off the dribble.

Nitro led 55-43 after three quarters and the Huskies never got within 10 in the final period. Maddox tacked on 10 points in the third period and 11 more in the fourth. She also came up with four steals.

“It’s huge,’’ Goins said, “because her dropping 30 like opened everything up. Normally, if I can’t hit shots or if I’m getting doubled and we can make some shots, things open up. But her doing that opened up everything. They had no answer for it.’’

Huskies coach Mike Parrish said his team didn’t do well to contain either Goins or Maddox.

“We didn’t do a good job on [Goins],’’ Parrish said. “We let her get by us some. I told them, ‘Don’t go for steals. Just try to keep her in front.’ If she does get by you, it led to transition buckets for them or open looks for [Maddox], which she hit everything she shot. Our plan coming in was to make sure we guarded her and we lost her a bunch of times, and she made us pay for it.’’

“We knew what they were going to do. It just came down to what we had to do. … We had a plan coming in and we didn’t do a very good job of executing it, and didn’t make shots. That’s basketball.’’

Brooklyn Bowen and Danielle Ward helped keep Nitro nearly even on the boards with North Marion by grabbing 13 and 12 rebounds, respectively. Bowen also had five assists playing on her birthday.

Jones doesn’t know if Maddox will drop in another four 3s on Saturday or if Goins will flirt with another triple-double like she did in the quarterfinals, but he knows he’ll get the best from his players.

“Like I’ve said day in and day out about these girls,’’ Jones said, “they handle the constructive criticism so well. I yell, I’m not going to lie. I yell a lot, and they don’t tuck their heads. They come out and they keep fighting. It showed today.’’