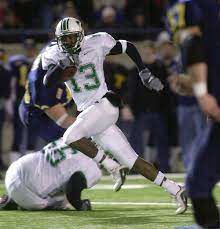 Marshall University wide receiver Denero Marriott races down field after catching a pass against East Carolina in the 2001 GMAC Bowl in Mobile, Alabama. 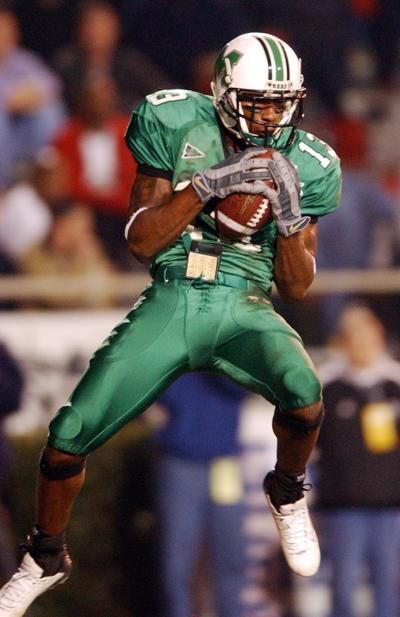 Marshall University wide receiver Denero Marriott races down field after catching a pass against East Carolina in the 2001 GMAC Bowl in Mobile, Alabama.

That’s how Marshall University football opponents felt during the Thundering Herd’s hey days of the 1990s and early 2000s.

“We had some ball catchers,” former MU wide receiver Denero Marriott said during a recent visit here. “Any of us could have been No 1 receivers on other teams in the (Mid-American Conference). We had four. You had to pick your poison and whatever you chose, you were wrong.”

Josh Davis, Curtis Jones and Darius Watts joined Marriott to form a receiving corps that in 2001 caught 245 passes for 3,426 yards. Marriott hauled in 80 for 800 yards for a team that went 11-2 and defeated East Carolina 64-61 in the GMAC Bowl in Mobile, Alabama.

Marriott caught two key passes in the game-tying drive as Marshall rallied from a 38-8 halftime deficit to win a game that has become a staple on ESPN Classic. The native of Martinsburg, West Virginia, finished his career with 143 catches for 1,805 yards and 17 touchdowns.

“We were able to muster up and put some drives together and pull it out,” Marriott said of the GMAC Bowl. “I was just talking to Curtis Jones about it. I think that was the most physical game I ever have been a part of. I don’t know if it was more so ECU being physical and being big or going two overtimes and playing 100-some snaps. I heard so many stories of people leaving and trying to get back in. It was crazy.”

The Herd locker room at halftime, too, was crazy. Coach Bobby Pruett was not the least bit pleased with his team’s performance.

I don’t think I can repeat those words,” Marriott said of what was said at halftime. “Bobby P. kind of dug in to us. We came out flat. I don’t know if it was the change of scenery. We had been going to the Motor City Bowl. I don’t know. Thank God we had the talent to turn it around in the second half.”

“The fans, the (Joan C. Edwars Stadium) being packed, night games, it’s hard to duplicate that kind of adrenalin,” Marriott said during the Thundering Lanes Bowl a Thon April 16 at the Strike Zone Bowling Center. “When I got the call about this bowling thing, I thought it’s another chance to juice up the competitive spirit. Why not?”

Marriott made another big comeback just more than one year ago. He was one of the earlier people in West Virginia to come down with COVID-19. He said the fever, fatigue and shortness of breath was rough.

“I have no idea where I could have gotten it,” Marriott said. “I hadn’t been anywhere.”

That the former wide out who spent some time with the Philadelphia Eagles was in excellent shape helped him against COVID.

If I hadn’t been working out and eating right, I’d have been worse off,” Marriott said.

Surviving a potentially deadly illness caused Marriott to cherish the reunion with his teammates that much more.

“It’s great,” he said. “I’m glad the guys reached out and are coming back. I miss the brotherhood. We were just talking about this over lunch. Those eight, nine 10 years, the buzz in the city was amazing. We were winning championships and bowl games. I hope (new MU coach Charles Huff) coaches them up.”