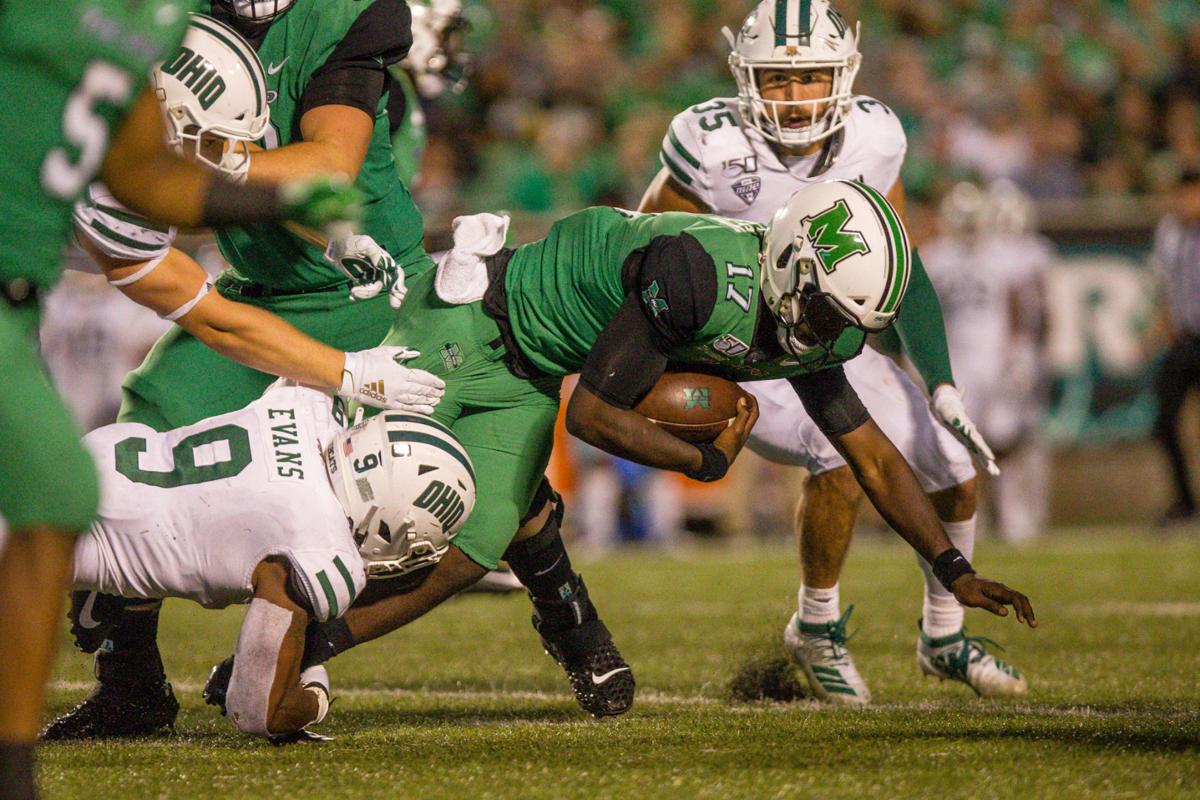 Sholten Singer/The Herald-Dispatch Marshall quarterback Isaiah Green (17) dives forward on a keeper as he is brought down by Ohio's Will Evans (9) in an NCAA football game on Saturday, Sept. 14, 2019, at Joan C. Edwards Stadium in Huntington, W.Va. 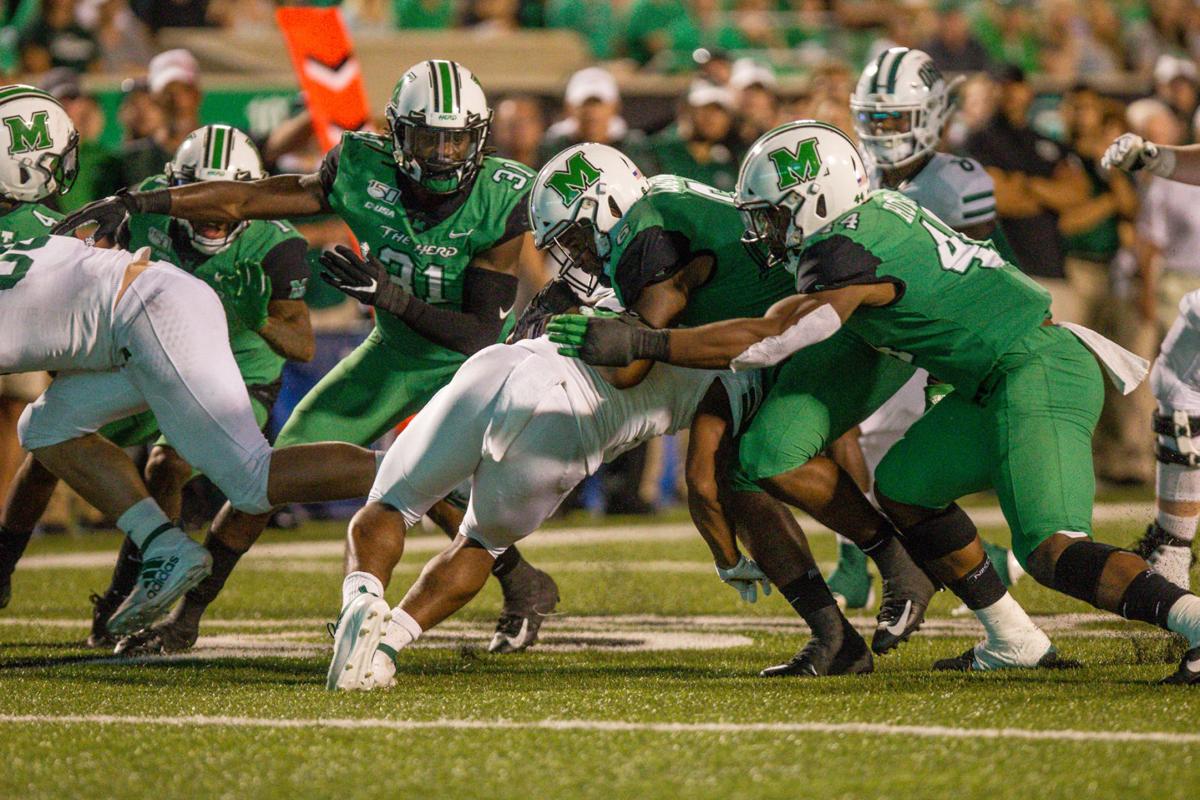 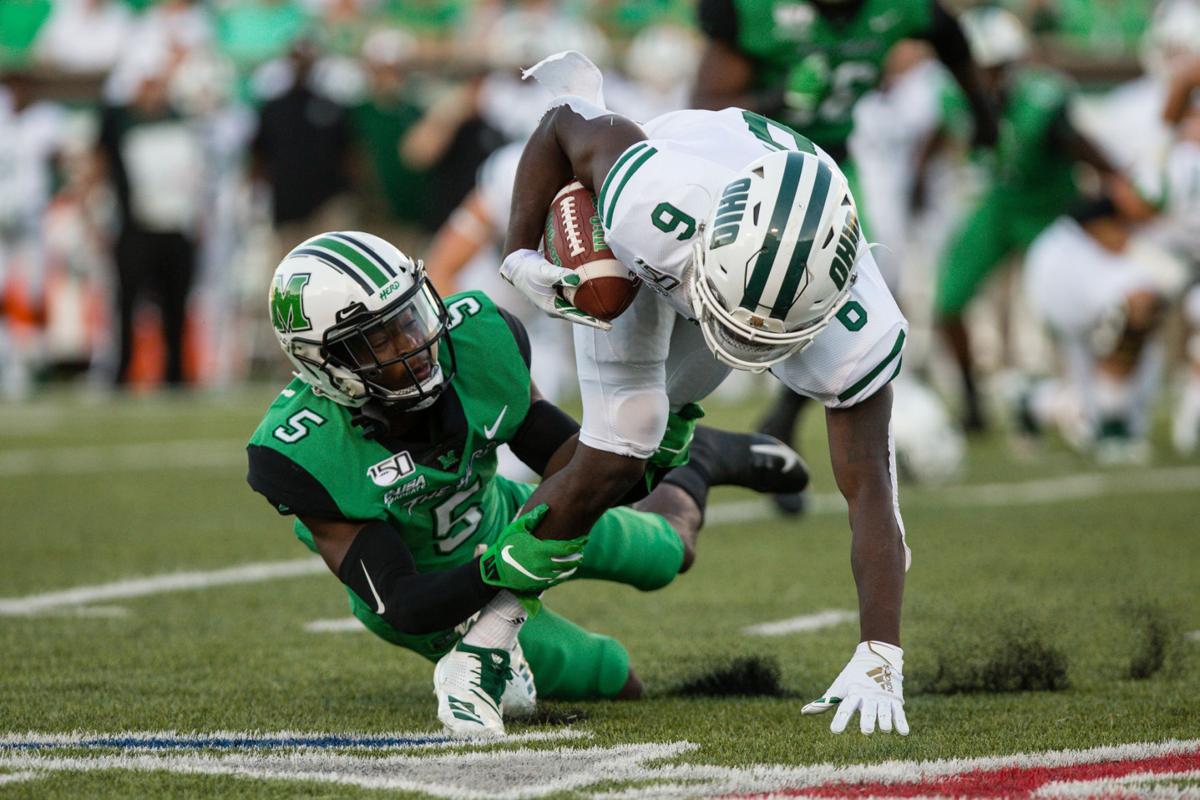 Sholten Singer/The Herald-Dispatch Marshall quarterback Isaiah Green (17) dives forward on a keeper as he is brought down by Ohio's Will Evans (9) in an NCAA football game on Saturday, Sept. 14, 2019, at Joan C. Edwards Stadium in Huntington, W.Va.

EDITOR’S NOTE: This is the third installment of a 12-part series previewing Marshall’s 12 football opponents for the 2020 season. Today, we look at the third opponent on Marshall’s schedule: Ohio.

HUNTINGTON — When Ohio University lines up for the 2020 season, it will look much different at the quarterback position.

Longtime starter Nathan Rourke — a bona fide team leader over the last four seasons — is gone, leaving a void in leadership that must be filled quickly.

That void could fall to another Rourke — Nathan’s younger brother Kurtis, who is a redshirt freshman.

Kurtis Rourke is certainly in the starting mix, but true freshman C.J. Harris is another player to watch for as an emerging talent.

No matter who the leader is behind center for the Bobcats, they will have many weapons around them as they get settled in at the position.

The rushing attack for the Bobcats returns more than 1,500 yards of production from its top two backs in O’Shaan Allison and De’Montre Tuggle.

Allison rushed for 869 yards and six touchdowns while Tuggle logged 644 yards and 11 touchdown. Each averaged around 6.3 yards per carry.

As has been the case for years, the rushing attack will be key to Ohio’s success, which means the offensive front has to do its part to push the Bobcats ahead this season.

For that to continue, the team must find replacements for its starting tackles from 2019 — former Coal Grove standout Austen Pleasants, who played left tackle, and right tackle Marques Grimes.

While the tackle positions are not settled, the interior of the line should still be strong, led by Nick Sink, who can play center or guard for head coach Frank Solich.

When the new quarterback has to throw the football, he will also do so to a wealth of experienced targets in Isiah Cox (39 rec., 663 yards, 2 TDs), Shane Hooks (26 catches, 515 yards, 5 TDs) and vocal leader Cameron Odom (19 catches, 207 yards). Jerome Buckner also adds experience with 18 catches for 326 yards last season.

On the defensive side, the team loses playmaking safety Javon Hagan, which is a big loss on the back end of the defense.

However, the Bobcats return two linebackers — Dylan Conner and Jared Dorsa — to the fold who finished Nos. 2 and 3 on the team in tackles with 83 and 80 tackles respectively.

The team also has playmakers at the cornerback position with Ilyaas Motley and Marlin Brooks returning while strong safety Jarren Hampton also is back.

If there is one question mark, it comes within special teams where the Bobcats have to replace specialists Louie Zervos (kicker) and Michael Farkas (punter).

The Bobcats are coming off a 7-6 year that culminated with a win over Nevada in the Famous Idaho Potato Bowl in Boise, Idaho.

For another successful season that leads to a bowl run, they must navigate the Mid-American Conference and a challenging non-conference schedule.

The Bobcats open the season against tough FCS opponent N.C. Central and also host Marshall on Sept. 19, but long road trips to Boston College and Texas State provide a challenge early on before MAC play starts.

Conference play begins with a pair of tough road contests at Toledo and Miami (Ohio) squeezed around a home date with Eastern Michigan. However, the Bobcats benefit from a pair of home games to end the season against Buffalo and Akron.