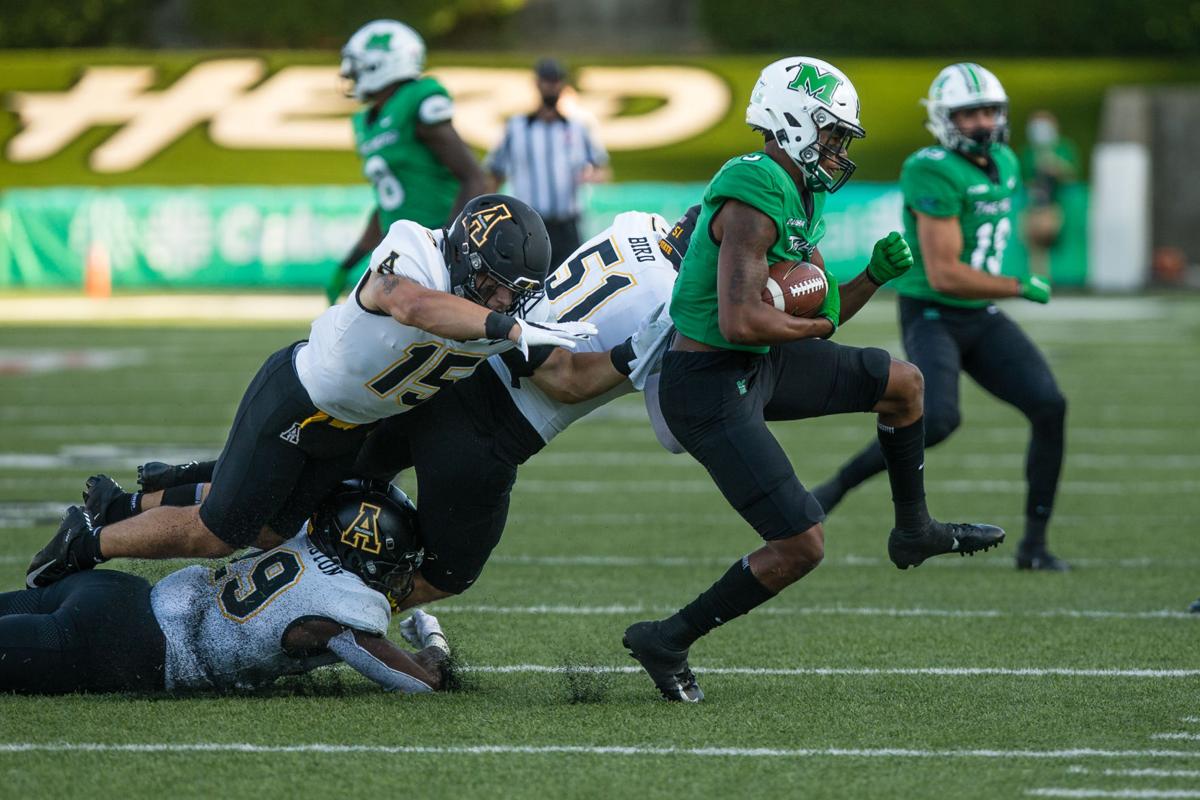 Marshall return specialist Talik Keaton (9) is pushes out of bounds as the Herd takes on Appalachian State during an NCAA football game in 2020 at Joan C. Edwards Stadium in Huntington. 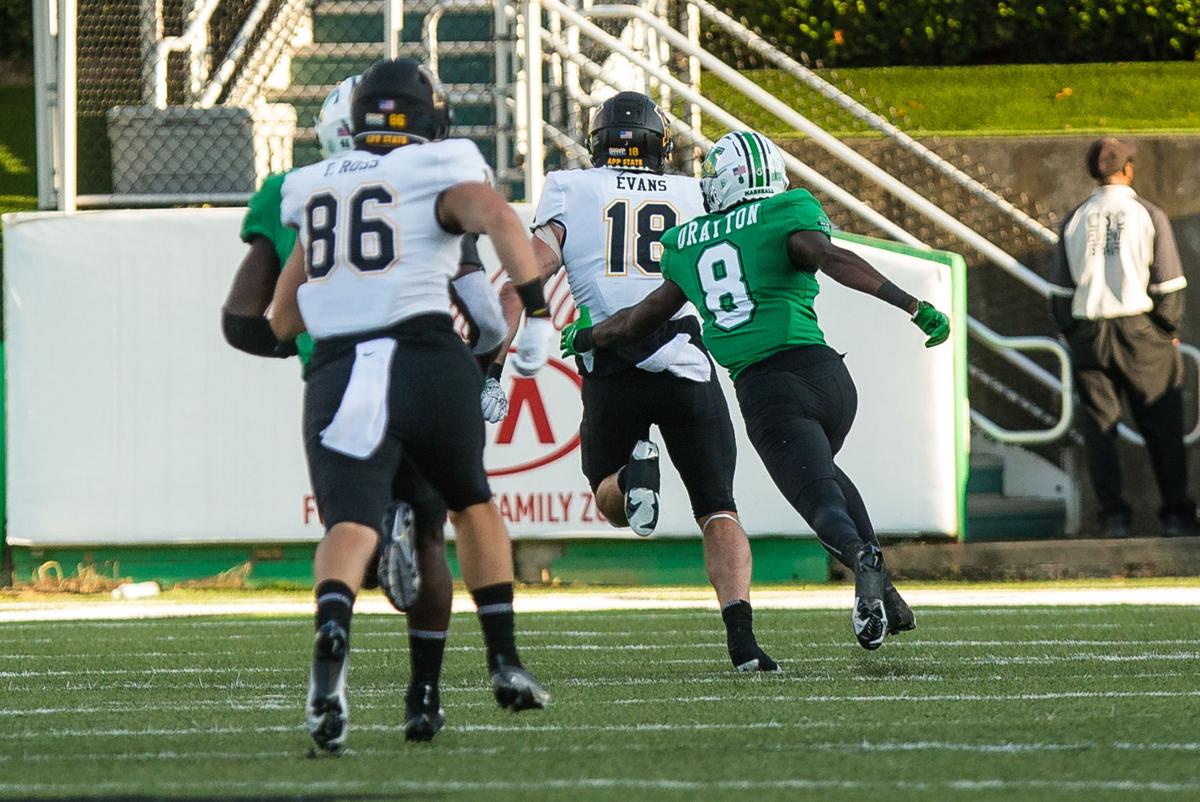 Marshall safety Brandon Drayton (8) grabs Appalachian State tight end Mike Evans (18) before punching the ball from his grasp as they race toward the end zone during an NCAA football game on Saturday, Sept. 19, 2020, at Joan C. Edwards Stadium in Huntington, W.Va. 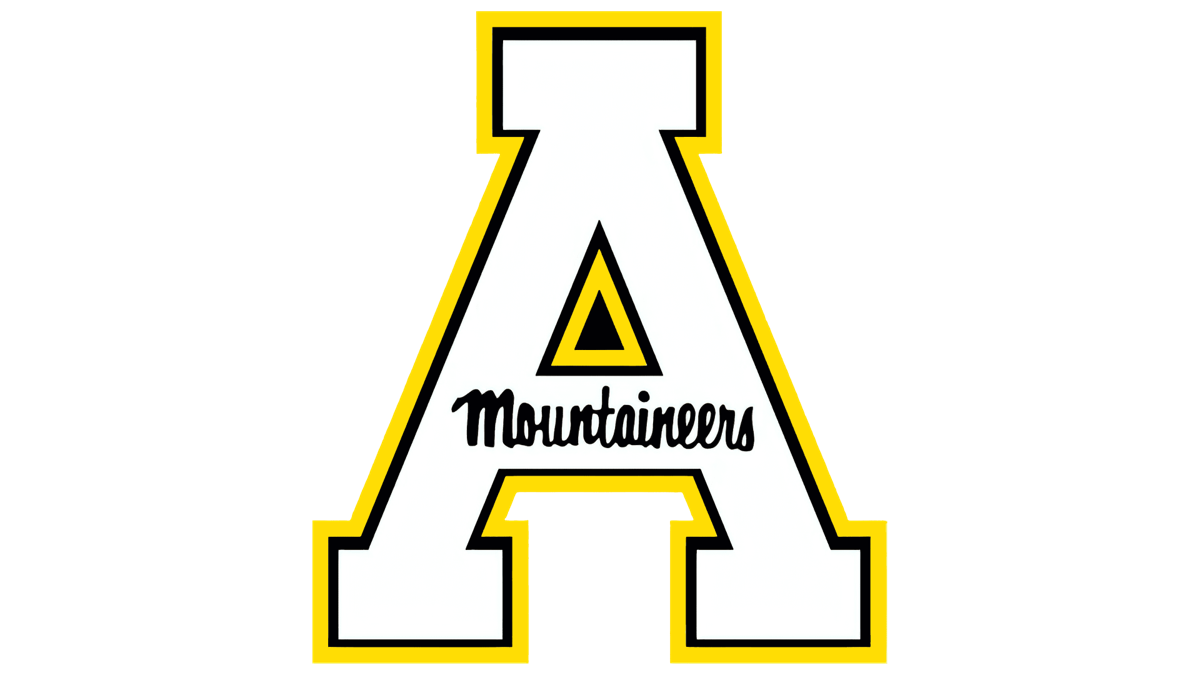 Marshall return specialist Talik Keaton (9) is pushes out of bounds as the Herd takes on Appalachian State during an NCAA football game in 2020 at Joan C. Edwards Stadium in Huntington.

Marshall safety Brandon Drayton (8) grabs Appalachian State tight end Mike Evans (18) before punching the ball from his grasp as they race toward the end zone during an NCAA football game on Saturday, Sept. 19, 2020, at Joan C. Edwards Stadium in Huntington, W.Va.

Editor’s note: This is the fourth installment of a 12-part series previewing Marshall’s opponents for the 2021 season. Marshall’s fourth opponent is the final on the non-conference schedule and re-ignites an old Southern Conference rivalry: Appalachian State.

HUNTINGTON — App State was just a few plays from the 2020 season being another special one in a recent history full of them.

However, a tough loss at Marshall, a late collapse against Coastal Carolina and a loss to Louisiana led to what was considered a disappointing 9-3 season in which the Mountaineers lost the denomination as the cream of the crop in the Sun Belt Conference.

Head coach Shawn Clark, a Charleston native, is intent on getting his team back to the top of the heap in the Sun Belt in 2021, but it won’t be easy with Coastal Carolina and Louisiana coming off nationally-ranked seasons and Georgia Southern still lurking in hopes of a rebound year as well.

While Coastal and Louisiana each had great 2020 campaigns, App State is the team with the solidified program that is in the crosshairs of everyone within the league.

A 9-3 season being a disappointment shows the longevity and expectations of App State’s program, and Clark has the talent to restore the Mountaineers back to their status as the league’s elite.

It starts at the skill positions where App State returns a ton of talent and experience.

The Mountaineers’ stable of wide receivers is extensive with Corey Sutton returning after opting out last season and the trio of Thomas Hennigan, Malik Williams and Jalen Virgil all returning after combining for 110 catches, 1,377 yards and nine touchdowns last year.

The biggest question is who will deliver those options the football, although it appears Chase Brice is in the lead to assume that role.

If Brice can be consistent, the Mountaineers have a chance to do some major damage in the passing game.

While the passing game has plenty of targets, the backfield also returns a pair of major players from last season in Camerun Peoples and Nate Noel.

Peoples seized the lead role in what was once a three-horse race, rushing for 1,124 yards and 12 touchdowns. Noel added 510 yards and three scores in half the touches of Peoples, giving the Mountaineers a pair of talented weapons.

Last season, App State featured one of the top offensive lines in the country, and that is where the biggest question lies moving forward as the entire left side of the line has to be replaced.

The right side is strong, however, with right guard Baer Hunter and right tackle Cooper Hodges returning to the fold. It is uncertain if either will shift along the line to balance things out, but having their veteran presence gives Clark leadership at what has been a position of strength in recent years.

While the offense appears strong, the defense returns with the most in tact as nine starters return to the mix.

The leaders of that defense are defensive end Demetrius Taylor and cornerback Shaun Jolly, who could garner more All-American talk in 2021.

Taylor finished 2020 as the team’s top disruptive force, finishing with 40 tackles, including 13 tackles for loss and six sacks. He also had two forced fumbles to his credit.

The opposition’s inability to block Taylor typically led to double-teams, which opened the way for others to work into the backfield.

With Taylor garnering attention on the outside and the presence of Jolly and now-departed Shemar Jean-Charles at the corner spots, the Mountaineers were able to use the linebackers freely.

With Jolly returning in 2021, the same can be expected as Jackson, Cobb and Brendan Harrington can work free as Jolly and safeties Ryan Huff and Kaiden Smith protect the back end.

The strength of the defense is a plus for the Mountaineers, who face a daunting schedule with the offensive prowess of non-conference foes East Carolina, Miami and Marshall, along with the tough Sun Belt schedule.

Given the strength of schedule plus talent returning, App State could easily see itself in top-25 discussion once again.

The Mountaineers have won 22 games in two seasons and have a senior-laden group that was around for the majority of that success.

The key will be solidifying the quarterback situations and the left side of the offensive line, but there is plenty of experience surrounding to expect App State to once again be in the mix for the Sun Belt’s best once again.