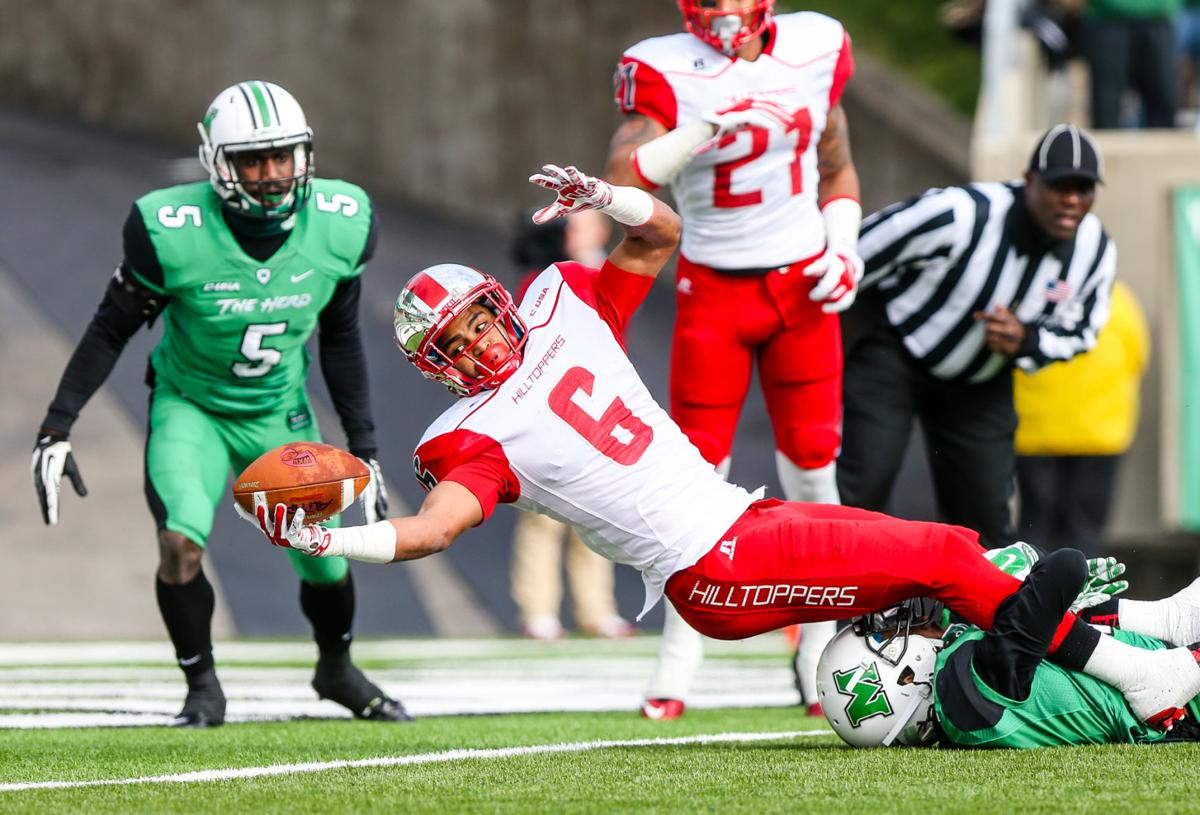 Western Kentucky's Joel German (6) dives in for a score against Marshall in a C-USA football game on Friday, Nov. 28, 2014, at Joan C. Edwards Stadium in Huntington, W.Va. Western Kentucky defeated the Herd 67-66 in overtime. 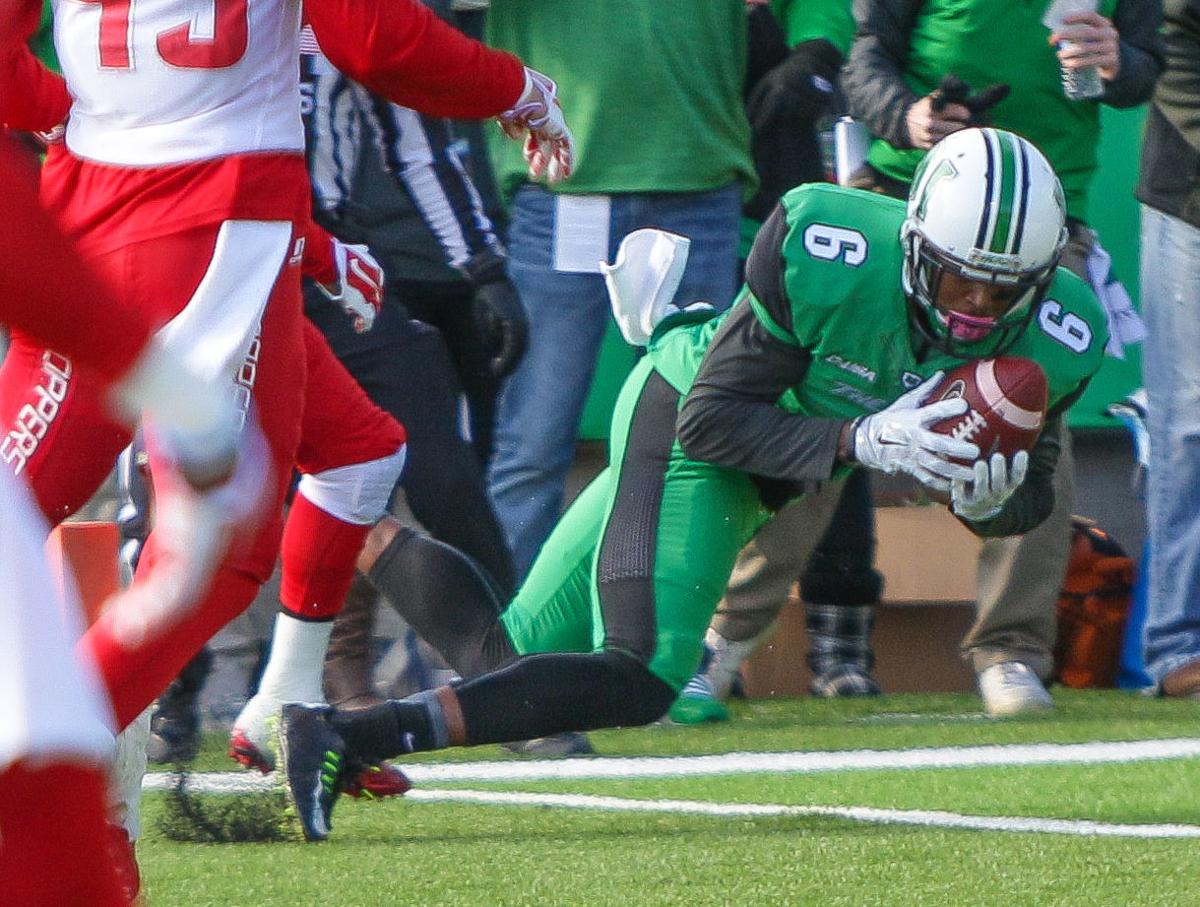 Davonte Allen (6) comes down with a touchdown catch as the Marshall University Thundering Herd fights to preserve its perfect season against the Western Kentucky Hilltoppers on Friday, Nov. 28, 2014, at Joan C. Edwards Stadium in Huntington.

Western Kentucky's Joel German (6) dives in for a score against Marshall in a C-USA football game on Friday, Nov. 28, 2014, at Joan C. Edwards Stadium in Huntington, W.Va. Western Kentucky defeated the Herd 67-66 in overtime.

Davonte Allen (6) comes down with a touchdown catch as the Marshall University Thundering Herd fights to preserve its perfect season against the Western Kentucky Hilltoppers on Friday, Nov. 28, 2014, at Joan C. Edwards Stadium in Huntington.

EDITOR’S NOTE: Marshall’s 2014 season was one for the record books.

The Herd won its only Conference USA championship, achieved a national ranking and was in talks for the Group of Five’s at-large bid during the first season of the College Football Playoff.

Marshall’s 13-1 record was one of its best campaigns at the FBS level, and there were plenty of great memories about the year.

However, that lone blemish — a 67-66 overtime loss to Western Kentucky on Senior Day — was one of the most resounding memories of that season.

That loss, which helped ignite the rivalry known as the Moonshine Throwdown, was memorable enough to land at No. 26 on the list of Marshall football’s Top 50 Moments.

HUNTINGTON — The final game of the regular season was supposed to be full of memories for 19 seniors on Marshall University’s football team.

It was memorable, but for all the wrong reasons.

In one of the wildest games in Conference USA history, Western Kentucky’s Willie McNeal caught a two-point conversion in overtime to give the Hilltoppers a 67-66 upset over the No. 19 Thundering Herd in front of 23,576 fans at Joan C. Edwards Stadium.

“You go into that locker room and there’s a lot of broken hearts,” Marshall head coach Doc Holliday said. “The bottom line is that we have to put it behind us because we’re playing for a championship next week.”

The loss ended Marshall’s bid for an undefeated season and dropped the Herd to 11-1. Marshall is 7-1 and will still play in the Conference USA championship game next week at a location to be announced Saturday afternoon.

McNeal’s two-point conversion came after Jared Dangerfield caught a 25-yard touchdown pass in the back of the end zone on the Hilltoppers’ first possession of overtime.

It came after Hyleck Foster had tightroped the sideline following a broken tackle to give the Herd its first and only lead of the contest on the opening drive of the extra session.

Doughty completed 34 of 50 passes for 491 yards and eight touchdowns while Cato ended the day 29 for 46 for 417 yards and seven touchdowns with four interceptions.

“This whole game comes down to me,” the senior said. “We’re not in this predicament if I don’t throw four interceptions. Point simple and blank. Everything that happened today all falls on me.”

The last time Cato had thrown four interceptions was a 44-7 loss to Ohio as a freshman.

While Cato shouldered blame, the defense didn’t get the production that it had been accustomed to.

The Herd passing defense had allowed 354 passing yards total in its last three games combined, but Doughty torched it repeatedly.

“We have a great quarterback and some good receivers,” Western Kentucky coach Jeff Brohm said. “We try to be aggressive. One thing we like to do on offense is we are going to be wide open. We are going to go for the jugular when we get the chance.”

The rushing attack for both teams also put up big numbers as Western Kentucky’s Leon Allen rushed 33 times for 237 yards and a touchdown.

Marshall’s Steward Butler, who came on in relief of injured running back Devon Johnson, rushed 24 times for 233 yards and two scores. Johnson went down in the second quarter with a shoulder injury and did not return.

“Devon, he’s not in real good shape right now,” Holliday said. “We’ll see where he is tomorrow. I thought Butler went in and played well.”

Cato led Marshall 82 yards in 12 plays and gained two first downs on third-down runs before hitting Eric Frohnapfel with a 5-yard touchdown pass to knot the score 59-59 with 39 seconds left.

The Herd then had a chance to win the game at the end of regulation after Raheim Huskey deflected a pass over the middle and Taj Letman intercepted it. However, Cato’s end zone heave to Deon-Tay McManus fell incomplete to send the game to overtime.

After allowing 49 points in the first half, Marshall kept Western Kentucky scoreless in the third quarter and used a 22-yard touchdown run by Butler to knot the game at 49-49.

However, Western Kentucky used a 21-yard field goal by Garrett Schwettman to retake the lead and turned Cato’s fourth interception of the day into a 35-yard touchdown pass from Doughty to Jared Dangerfield to retake a two-score lead, 59-49.

Justin Haig’s 18-yard field goal for Marshall cut the lead to seven after a touchdown by Butler was reversed and the defense got a stop to give the Herd a chance at the end of the game.

Holliday spoke on the decision to go for the field goal instead of the touchdown.

“You’re down 10 right there and the one thing that can’t happen is you can’t come away with zero points,” he said. “You have to get points right there and then we went down and tied it up there at the end. I think in that situation right there, you just couldn’t take that chance of coming away with nothing.”

Western Kentucky and Marshall combined for 91 points and 840 yards of offense in a first half that had the Hilltoppers leading, 49-42, as the teams went to the locker room.

The mark just missed the NCAA record for points in a half of 94 set by North Texas and Navy in 2007.

The difference in the first half was the turnover battle.

Cato threw three interceptions — all to Western Kentucky’s Branden Leston — and the Hilltoppers turned those miscues into 21 points.

Western Kentucky led by 21 points after Joel German caught a 9-yard touchdown pass from Doughty to make the Herd pay for Cato’s third pick of the game.

However, the Herd got back into the contest with 14 points in a span of 27 seconds.

After Frohnapfel caught a 2-yard touchdown from Cato, A.J. Leggett intercepted Doughty on the second play of the ensuing drive. On the first play following the turnover, Butler raced 48 yards for a touchdown to bring the Herd within 42-35.

In the contest, there were five players who had multiple touchdown receptions. Tyler Higbee had three for the Hilltoppers while Dangerfield added two. Frohnapfel, Davonte Allen and Hyleck Foster each had two for the Herd.

Allen was kicked out with 1:41 left in the third quarter for his second unsportsmanlike conduct penalty of the game. He finished with six catches for 141 yards and two touchdowns.

Tommy Shuler ended the day with 10 catches for 132 yards — his second consecutive game with double-figure catches.

Cato’s seven touchdown passes in the game were a Marshall record. He also went past 3,000 passing yards for the season.

Letman finished with 15 tackles and an interception for the Herd while Darryl Roberts had 11 tackles, two pass breakups and a forced fumble.

HUNTINGTON — When Western Kentucky knocked No. 19 Marshall from the undefeated ranks in a 67-66 win on Nov. 28, 2014, the Herd players and fans left Joan C. Edwards Stadium feeling a bit queasy.

HUNTINGTON - Marshall football is in its 50th year since the 1970 Marshall plane crash, which nearly ended the program. In this series, HD Media looks at the Top 50 moments in Herd football history since that tragedy on Nov. 14, 1970, which took the lives of all 75 patrons aboard Southern Airways Flight 932.