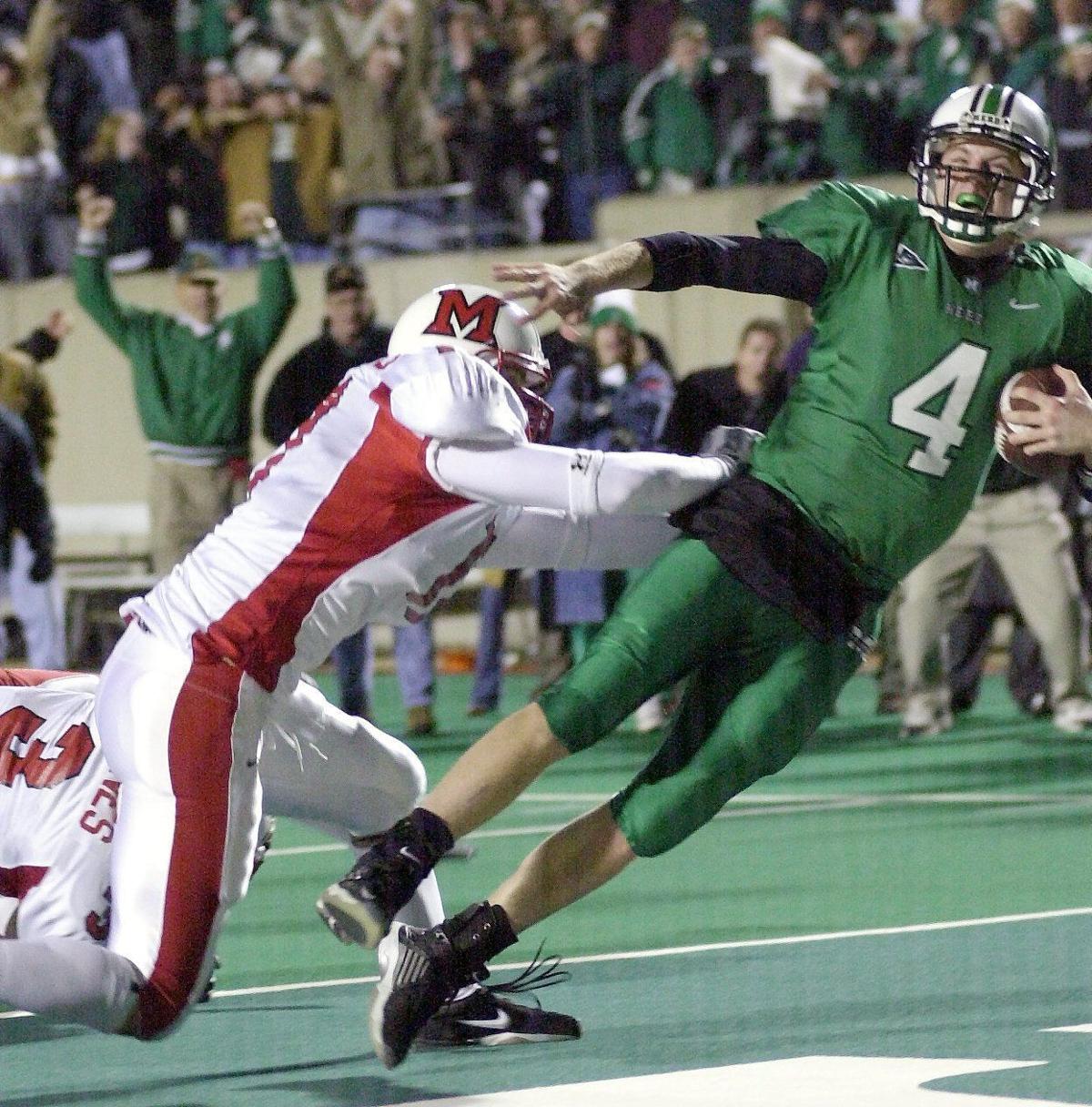 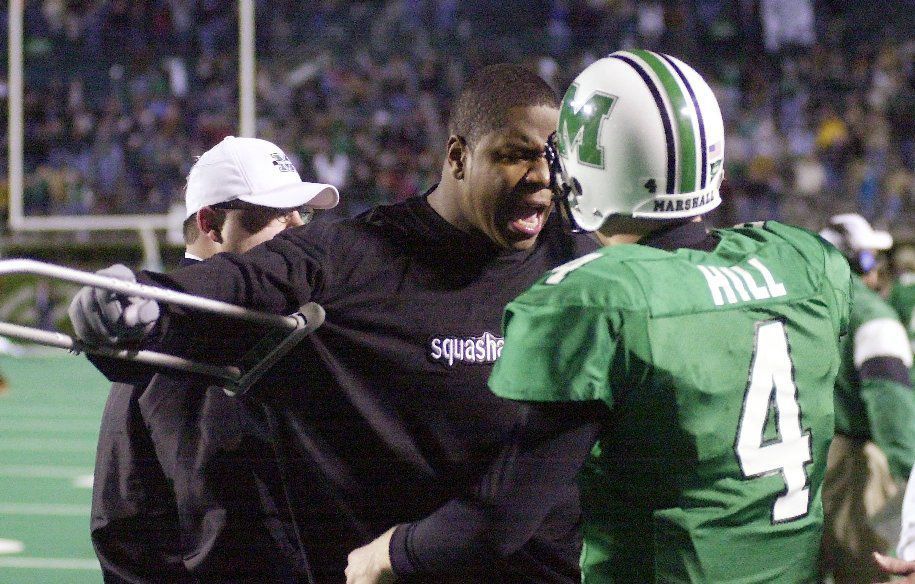 EDITOR’S NOTE: The 2002 season started full of promise for Marshall with Mid-American Conference and Bowl Championship Series dreams in the offing.

However, Marshall suffered two losses in Akron at the Rubber Bowl on Nov. 2, 2002 — the second a product of the first.

The first, early in the matchup against the Zips, was a leg injury — later found to be a fractured tibia — to Marshall quarterback and Heisman hopeful Byron Leftwich; the second was the game itself, by a score of 34-20.

Backup signal caller Stan Hill looked unnerved as he filled in, and the fact that Marshall’s next contest — a key East Division matchup with rival Miami (Ohio) — would be Hill’s first career start was not an ideal situation for the Herd, who needed a win to stay alive in the race for the East Division title.

Against expectations, however, Hill gave a heroic performance against the RedHawks, and the game was punctuated by the arrest of a Miami (Ohio) assistant coach for punching a fan on the field following the game.

It was a wild Tuesday night at “The Joan” — wild enough to earn the No. 27 ranking in Marshall football’s Top 50 Moments. Here is the original story from that meeting on Nov. 12, 2002.

Hill, a sophomore making his first career start in place of injured starting quarterback Byron Leftwich, led Marshall on a 57-yard drive in the final 1:39 to keep the Thundering Herd’s postseason hopes alive. His 1-yard bootleg with 5 seconds remaining gave Marshall (7-2, 5-1 Mid-American Conference) a 36-34 victory over Miami (Ohio) before a raucous Marshall Stadium crowd of 26,851.

“The main thing was either throw it away or get in the end zone,” Hill said of the biggest play of his young career. “Coach (Bobby) Pruett told me one thing not to do is take the sack. I dropped back, and I saw JD (Josh Davis) coming across and they all bit on JD and I saw an opening.”

The victory places Marshall in first place of the MAC East Division over the RedHawks (7-4, 5-2). The Herd can claim its sixth straight division title and host the MAC Championship Game with a victory Nov. 23 at Ohio.

“It was a heck of a football game,” Pruett said. “I’ve never been prouder of a team.”

Playing in place of a Heisman Trophy candidate, Hill calmly executed the game-winning drive. He followed a 17-yard pass to Darius Watts with consecutive 12-yard completions to Josh Davis.

Following a 7-yard Hill scramble to the Miami 9-yard line, two straight incomplete passes set up fourth down and three from the 9. Alphonso Hodge was flagged for pass interference, giving Marshall a first and goal from the 2.

Another pass interference call — this one on cornerback Milt Bowen — advanced the ball to the 1 with 10 seconds remaining.

Hill then pumped a fade pass to Davis and bootlegged around left end, hurdling a RedHawks defender at the goal line for the game-winner.

“I’ve seen two performances, two weeks in a row that’s been nothing short of amazing,” said Marshall center Jeff Edwards, referring to Leftwich’s comeback effort against Akron. “What Stan did tonight was unbelievable. The way he played, and the composure he had, the leadership he had, that’s what surprised me so much.

“He was such a good leader, man, in the huddle. Right off the bat, he had this look in his eye. I knew he was going to play well, but I’ll be honest with you, I didn’t think he’d play that good.”

The sophomore quarterback completed 25 of 39 passes for four touchdowns with two interceptions. Leftwich, the nation’s leader in total offense, was out with a left shin injury suffered Nov. 2 in a defeat at Akron where he came back into the game after being injured.

Holding onto a 29-27 lead and driving into Miami territory, Hill was intercepted at the RedHawks’ 22 by Bowen. Mixing Ben Roethlisberger’s controlled passing and halfback Luke Clemens’ hard work between the tackles, Miami then drove 78 yards to take its first lead of the game.

Marshall took over at its 35 and drove to the Miami 27, but Bowen and Matt Pusateri forced Brandon Carey out of bounds four yards short on a fourth down and nine with 2:36 remaining.

Miami, however, could not exhaust the clock, losing two yards on two Clemens carries and five more on Jamus Martin’s sack of Roethlisberger.

“We talked about it on the sidelines,” Marshall linebacker Kevin Atkins said. “It was our time to shine. And we did it.”

Marshall took over at its own 43 and embarked on a dramatic, winning scoring drive.

“We work on the two-minute offense every day,” Marshall quarterbacks coach Larry Kueck said. “And we rotate which quarterback works every day, so I think Stan was really comfortable with that because he’s done it so many times. He went out in the game and he executed it like he did in practice.”

After surrendering a 14-point first half lead, Marshall again jumped on Miami to start the second half.

Marshall forced a three and out, and Hill continued the momentum with the longest completion of his career, a 34-yard lob over the right shoulder of Denero Marriott.

Hill and Watts then connected on their third touchdown, with Watts beating cornerback Ryan Sprague on an 11-yard fade. Marshall attempted a fake on the extra point, and Head was tackled short of the goal line.

Miami needed just three plays to drive 80 yards and trim the deficit to 29-24. Clemens finished the abbreviated drive by taking a screen pass and sprinting through the defense for a 49-yard touchdown.

The give and take between the East Division’s top two teams continued on Marshall’s next series. Hill scrambled 20 yards on a third and 11, but was intercepted by Bowen at the Marshall 36 on the next play.

Jared Parseghian converted the first of Bowen’s two pickoffs into a 21-yard field goal, cutting Marshall’s lead to 29-27. Herd cornerback Roberto Terrell nearly ended the drive, but he dropped an interception in stride in the end zone.

Marshall and Miami took turns dominating first half action with the wind at their backs. The Herd struck first, converting a turnover on the game’s third play into a 7-0 lead.

Defensive end Orlando Washington intercepted Roethlisberger at the RedHawks’ 24 and sprinted down the Miami sideline to the 6. Two plays later, Watts made a diving catch along the same sideline for an 11-yard touchdown, Hill’s first career TD pass.

Watts moved into second on the all-time MAC touchdown receptions list with his 30th career TD.

Following a Miami three and out, Marshall drove exclusively on the ground for its second score. Hill gained 19 yards on a quarterback draw, and Brandon Carey carried four straight times for 28 yards, setting up Curtis Head’s 43-yard field goal.

Without Leftwich, Marshall had completed one pass but led 10-0 less than eight minutes into the game.

A 53-yard return by Bowen on the ensuing kickoff snapped Miami from its opening funk. Parseghian cut the deficit to 10-3 and tied a MAC record with his 15th consecutive field goal, a 27-yarder.

Receiving a rare boost from its special teams, Marshall took a 14-point lead early in the second quarter. Josh Davis’ 22-yard punt return — the Herd’s longest this season — gave his team possession at its own 49.

Five plays later, Carey caught a swing pass from Hill and plowed through Paul Tripp’s goal line tackle for a 10-yard touchdown and 17-3 lead. Completions of 13 yards to Carey and 28 to Watts keyed the drive.

Marshall took the 14-point lead with 14:54 remaining in the second quarter. Driving against the wind, the Herd did not gain a first down in the period, gaining just 12 yards in four series.

Taking over at the Miami 48 after a 28-yard Head punt, Roethlisberger followed a 19-yard completion to tight end Matt Brandt two plays later with a 32-yard touchdown strike to wideout Jason Branch.

Following the second of three straight Marshall three and outs, Miami again benefited from a special teams gaffe for excellent field position. The Herd was called for violating the halo rule on Eddie Tillitz’s punt return, giving the RedHawks possession at their 47.

Roethlisberger and wideout Randy Stegman took advantage. Five plays after connecting for 22 yards, the duo combined on a 13-yard touchdown, knotting the halftime score at 17.

Marshall faced a must-win situation against the RedHawks. A loss against its most bitter conference rival would have eliminated the Herd from title contention.

“We’re still in the race in the East,” Hill said. “That’s our main focus. We’re here to win championships.”

Miami players and coaches were not available following the game. A RedHawks assistant coach was reportedly taken off the field by police following an alleged altercation with a fan.

In addition, damage was done within the Marshall Stadium boxes of Miami coaches, according to Marshall sports information director Ricky Hazel. Holes were punched in walls and a counter nearly was torn from a wall, Hazel said.

Hill's heroics locked up the RedHawks ... and a coach

HUNTINGTON — On Nov. 12, 2002, Marshall quarterback Stan Hill delivered one of the most clutch performances ever seen by a Herd backup when he accounted for 325 total yards and five scores in a 36-34 win over Miami (Ohio).

HUNTINGTON - Marshall football is in its 50th year since the 1970 Marshall plane crash, which nearly ended the program. In this series, HD Media looks at the Top 50 moments in Herd football history since that tragedy on Nov. 14, 1970, which took the lives of all 75 patrons aboard Southern Airways Flight 932.