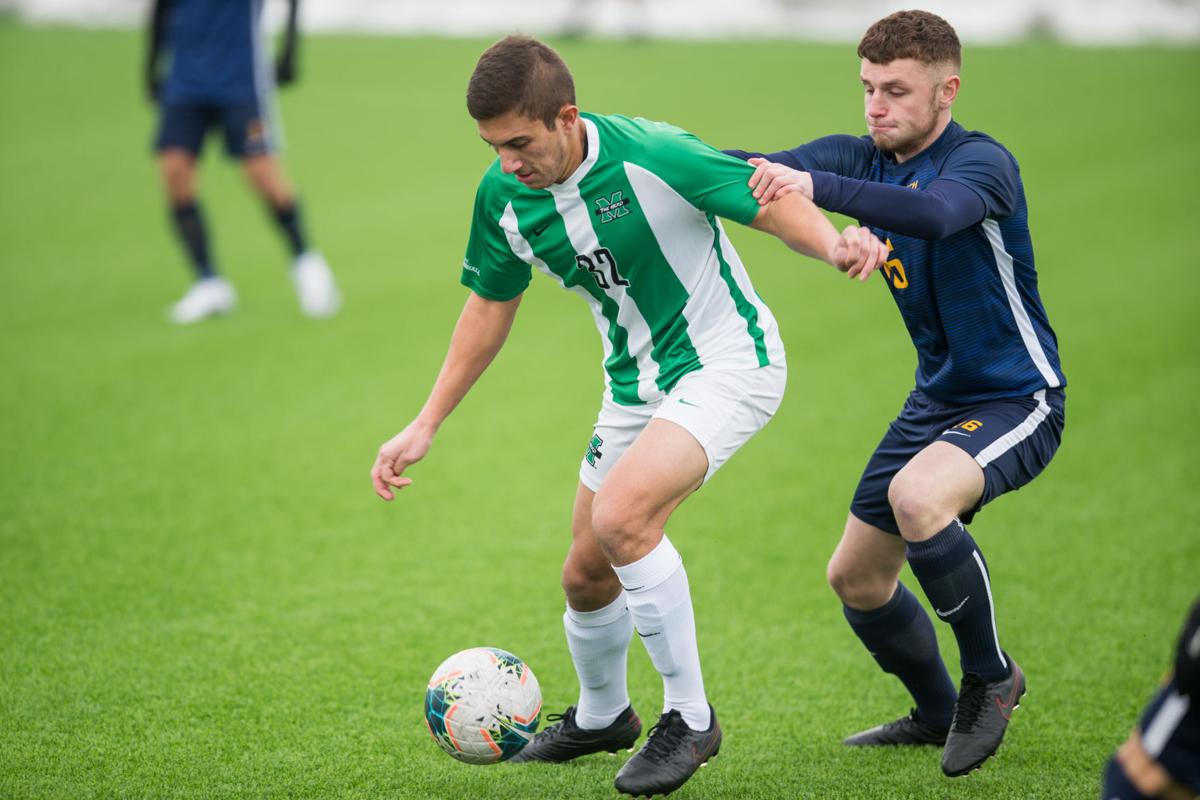 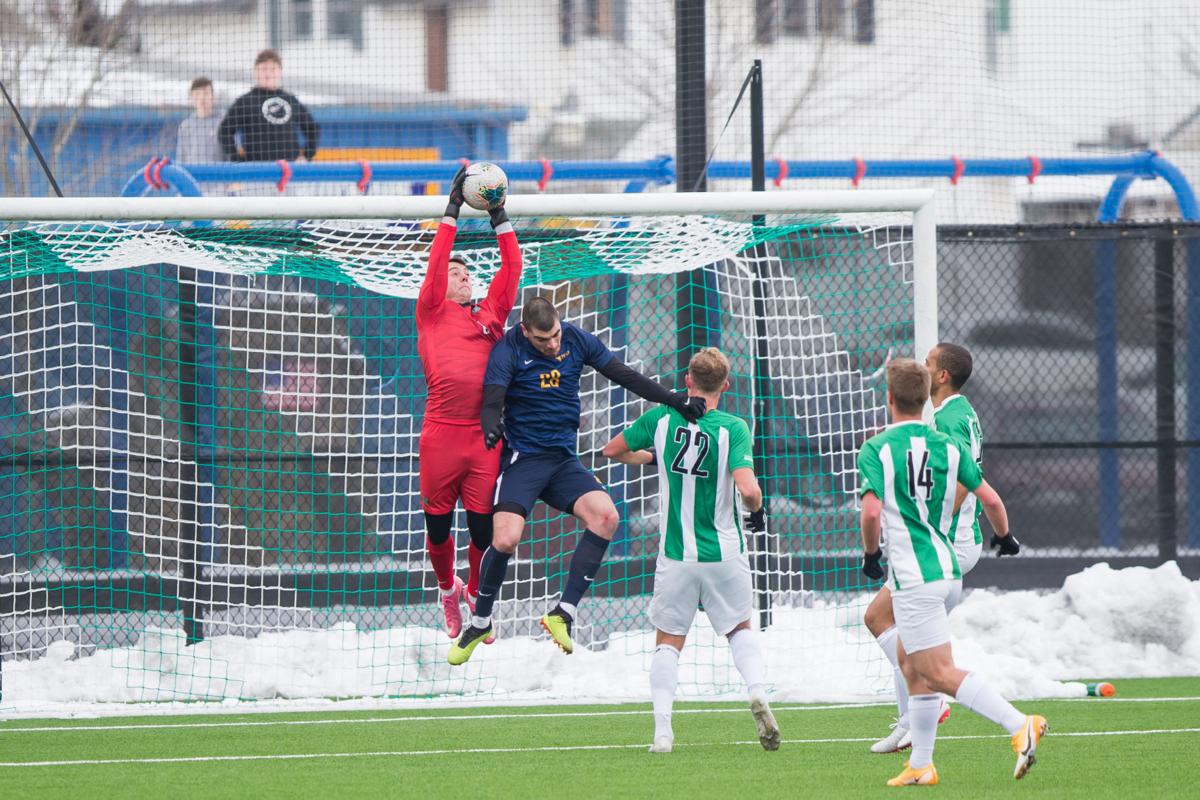 The Herd’s goalkeeper Kyle Winquist (0) goes up to catch an incoming shot as the Marshall University men’s soccer team takes on WVU Tech on Sunday, February 21, 2021, in Huntington. 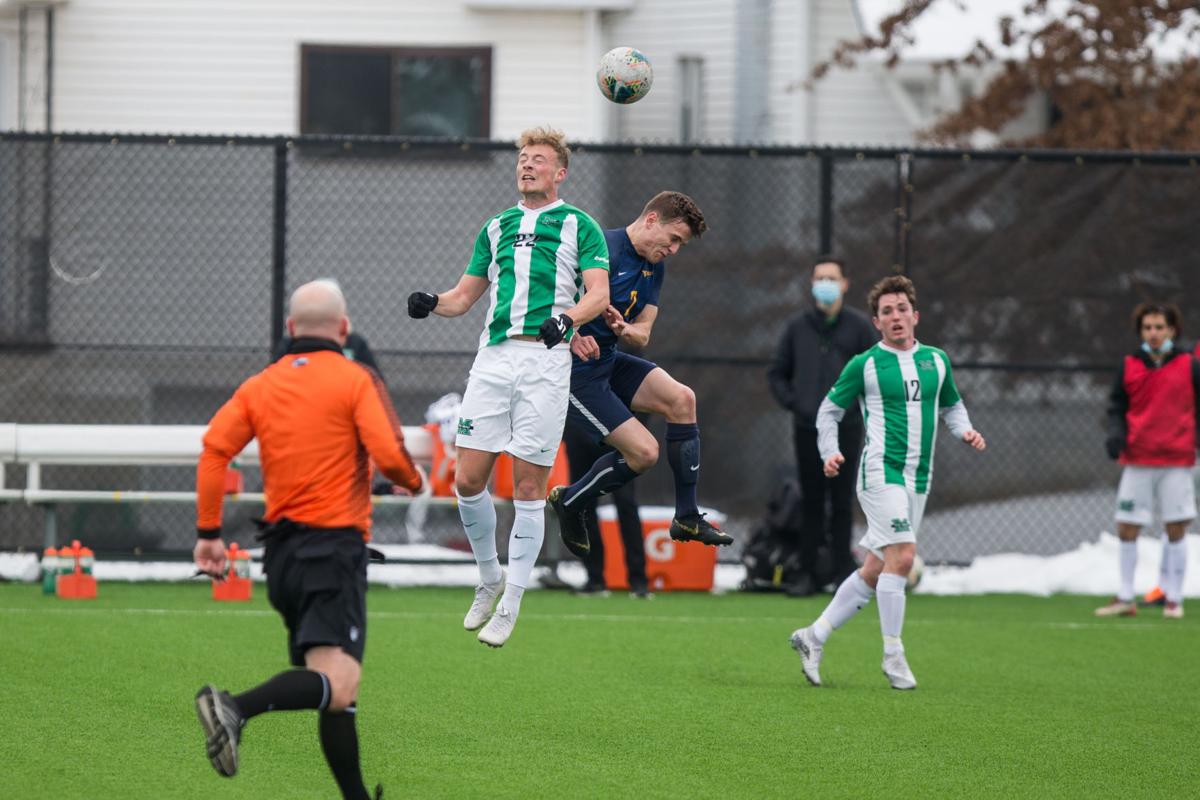 The Herd’s Noah Raphael (22), from left, goes up to header a ball against WVU Tech’s Jason Constable (2) as the Marshall University men’s soccer team takes on WVU Tech on Sunday in Huntington.

The Herd’s goalkeeper Kyle Winquist (0) goes up to catch an incoming shot as the Marshall University men’s soccer team takes on WVU Tech on Sunday, February 21, 2021, in Huntington.

The Herd’s Noah Raphael (22), from left, goes up to header a ball against WVU Tech’s Jason Constable (2) as the Marshall University men’s soccer team takes on WVU Tech on Sunday in Huntington.

HUNTINGTON — Once the offense got rolling, there was no stopping Marshall’s men’s soccer team.

Marshall fired 33 shots in the match and scored eight goals in the second half during a 10-1 win over West Virginia Tech on Sunday at Hoops Family Field.

For Marshall (1-0-1), it was a much more spirited showing than its season-opening draw last weekend.

“I’m very happy with how everybody did and how everybody approached the game — especially the second half group,” Marshall assistant coach Petsa Ivanovic said. “They did not underestimate and did not take it easy. They executed the plan well and the score showed it in the end.”

Vitor Dias had a hand in four consecutive goals in a 15-minute stretch of the second half.

First, Dias assisted on goals to Jan-Erik Leinhos and Milo Yosef in a four-minute span that pushed Marshall’s lead to 5-1.

Then, Dias later scored a pair of goals in a four-minute span — the second of which was the most brilliant.

Dias took a long pass from Nathan Dossantos and touched it to his left foot before firing a shot from inside the 18 that found the upper left corner of the net.

The impressive flick and strike set off a celebration from teammates as the rout was on.

“For us, we worked a lot this week on fixing the things we did not execute well against Ohio Valley,” Ivanovic said. “We wanted our guys to be much faster, much quicker and more clinical in the attacking third.”

Dias said the demeanor of the team was much more solid on Sunday after the eye-opening 1-1 draw against OVU in the opener.

“We really learned a lot after the OVU game,” Dias said. “We applied all that today.”

Leinhos finished with a pair of goals and an assist, as well, while Jamil Roberts added a goal and two assists. Yosef scored twice also.

The second half was a distinct difference from the first when Ivanovic jumbled his lineup to see some players who are battling for spots.

Marshall led just 2-1 at the half after WV Tech got a goal from Abdelrahman Rabie in the 42nd minute.

However, the Herd’s normal starting side needed less than two minutes to crack the scoreboard in the second half when Leinhos sent a pass across to Max Schneider, who scored from inside the box.

Marshall returns to action at 3:30 p.m. on Tuesday when the Herd hosts East Tennessee State at Hoops Family Field.