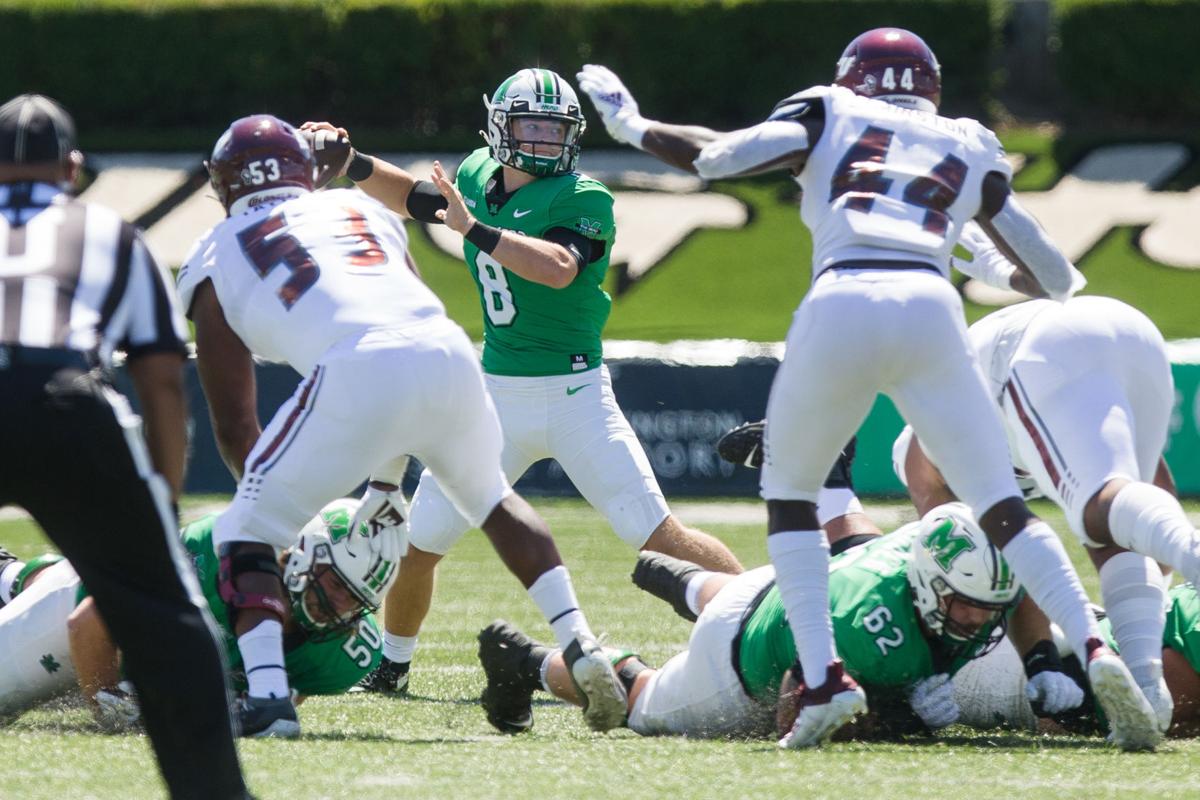 Marshall quarterback Grant Wells (8) makes a throw as the Herd takes on Eastern Kentucky during a NCAA football game on Saturday, Sept. 5, 2020, at Joan C. Edwards Stadium in Huntington. 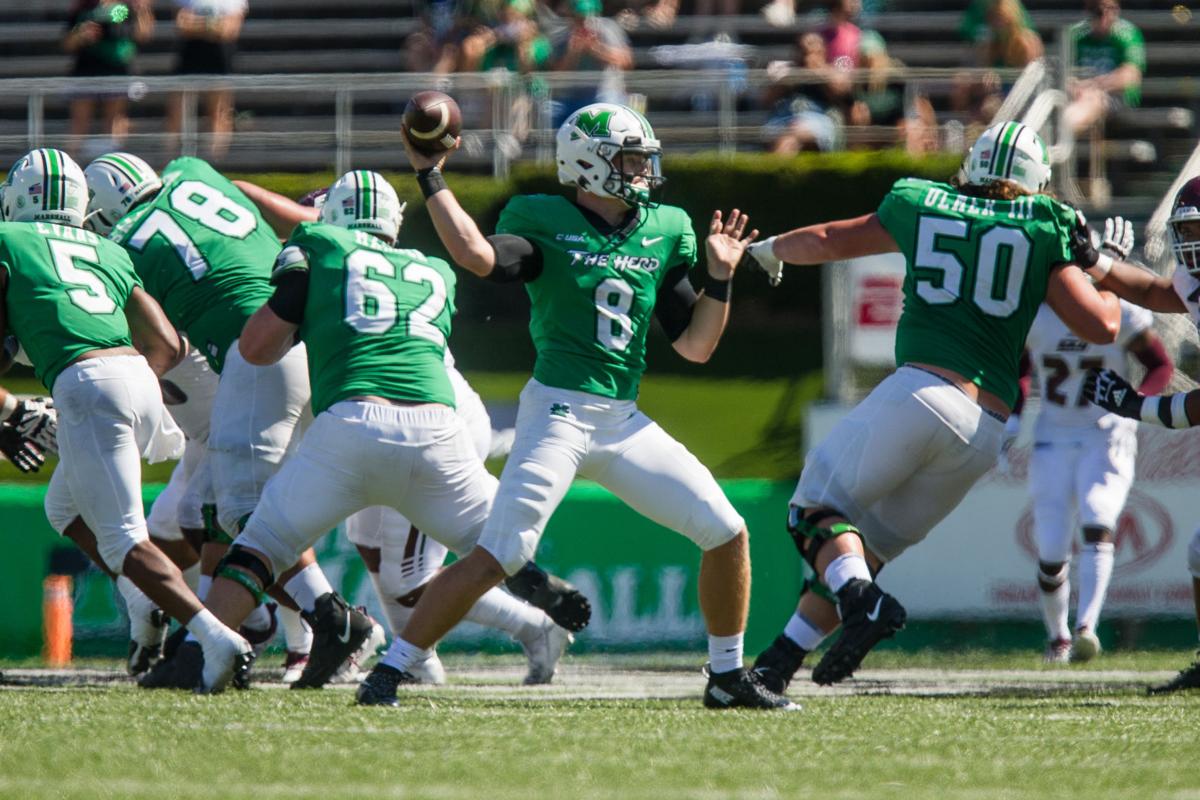 Marshall quarterback Grant Wells (8) makes a pass as the Herd takes on Eastern Kentucky during a NCAA football game on Saturday, Sept. 5, 2020, at Joan C. Edwards Stadium in Huntington. 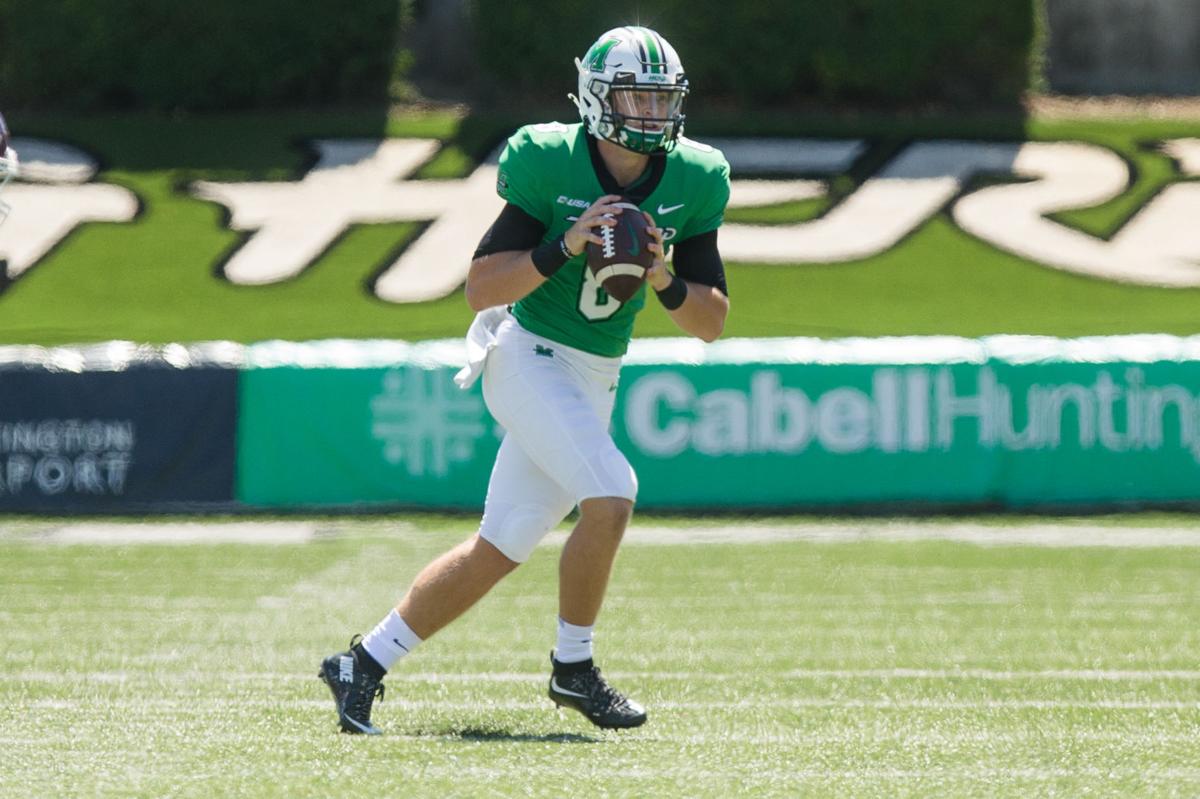 Marshall quarterback Grant Wells looks to make a throw as the Herd takes on Eastern Kentucky during a NCAA football game on Saturday, Sept. 5, 2020, at Joan C. Edwards Stadium in Huntington.

Marshall quarterback Grant Wells (8) makes a throw as the Herd takes on Eastern Kentucky during a NCAA football game on Saturday, Sept. 5, 2020, at Joan C. Edwards Stadium in Huntington.

Marshall quarterback Grant Wells (8) makes a pass as the Herd takes on Eastern Kentucky during a NCAA football game on Saturday, Sept. 5, 2020, at Joan C. Edwards Stadium in Huntington.

Marshall quarterback Grant Wells looks to make a throw as the Herd takes on Eastern Kentucky during a NCAA football game on Saturday, Sept. 5, 2020, at Joan C. Edwards Stadium in Huntington.

On Monday, Wells was named the Conference USA Offensive Player of the Week, as voted on by the league’s media panel.

In his first start for the Herd, Wells finished 16 of 23 for 307 yards and four touchdowns on Saturday.

Wells’ performance brought about an onslaught of national attention and social media swelled with comments about the Charleston native’s strong debut.

“I try to put my phone away a little bit and ignore it ... because we’ve got nine or 10 or so games left,” Wells said. “That’s only one game. I try not to let that affect me too much.”

That demeanor is one that Wells said helped him get through his debut on Saturday, which marked his first live action behind center in nearly two years since taking the field for George Washington High School.

After weeks of practice against the defense, Wells didn’t seem fazed by being on the field for his first collegiate game as a starting quarterback.

Wells said he knew the day could be special based on the feel in the locker room prior to the game.

Wells came out strong, completing his first seven passes of the game and throwing for 280 of his 307 yards prior to halftime in racing Marshall to a 38-0 halftime advantage.

Wells gave that credit to his offensive line, who gave him plenty of time against the various looks put forth by the Colonels.

“It just goes back to how comfortable I felt back there,” Wells said. “I had all the time in the day to sit back there and pick apart that defense.”

Wells morphed that time to throw into a record-setting effort for a Marshall quarterback making their debut, passing the old mark of 292 yards set by Stan Hill in a 2002 win over Miami (Ohio).

It wasn’t just that he threw for 307 yards, either. Instead, the talk was about how he did so.

Wells showed on Saturday that he could make all collegiate throws, grabbing touchdown tosses on a post route to Xavier Gaines, a corner route to Talik Keaton and a deep ball to Jaron Woodyard.

Wells also got all of Marshall’s receiving corps active, joining with backup Luke Zban to connect with 13 different receivers, including five tight ends.

“One stat that stood out was just how many receivers got a touch,” Wells said. “That was something that really stood out to me and was very impressive. That’s the one thing about this offense and I’ve said this before — I don’t care who is out there with me. Every receiver is going to make a play for me, and that’s one thing that’s huge, going into each game.”

While the Herd’s 59-0 win over Eastern Kentucky was memorable, Wells said that the performance — and, effectively, the honor — is in the past and the focus is forward.

When asked how he planned to spend the rest of a scheduled day off for the team during a bye week prior to the Sept. 19 contest against Appalachian State, Wells answered quickly.

“Get back to work,” Wells said. “I know it sounds weird to say, coming off the high we’re on right now, but we’ve got to get back to the feeling we had before this game — that’s just get back to work. We’ll start preparing for App State today.”