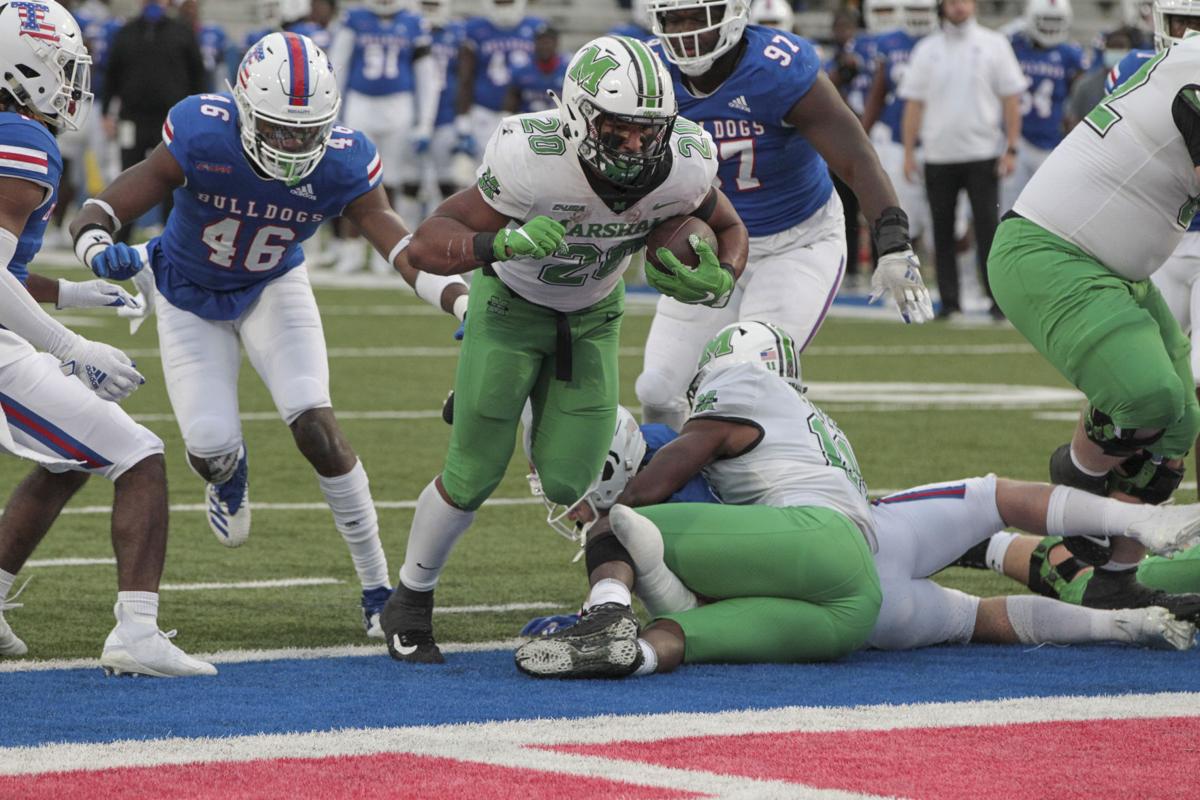 Marshall Thundering Herd running back Brenden Knox (20) scores a first-half touchdown during an NCAA football game between the Herd and Louisiana Tech on Saturday, Oct. 17, 2020, at Joe Aillet Stadium in Ruston, La. 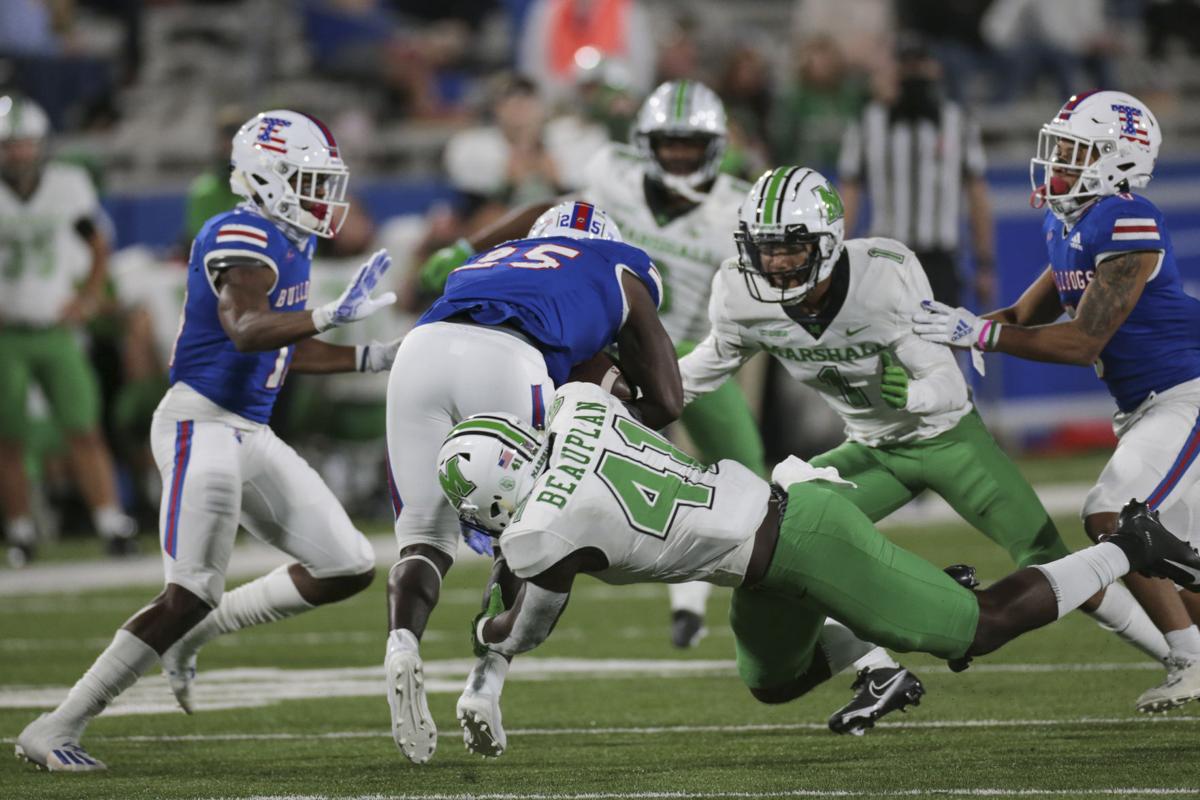 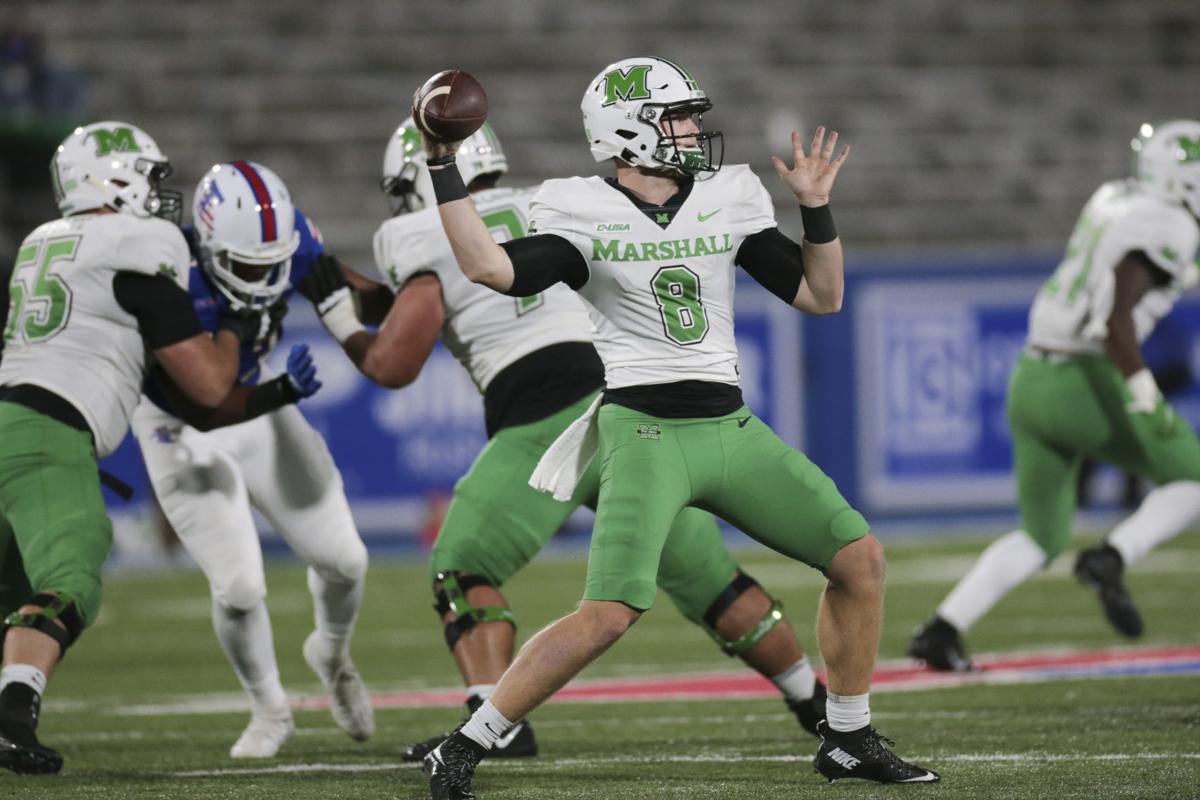 Marshall Thundering Herd quarterback Grant Wells (8) passes the ball during an NCAA football game between the Herd and Louisiana Tech on Saturday, Oct. 17, 2020, at Joe Aillet Stadium in Ruston, La. 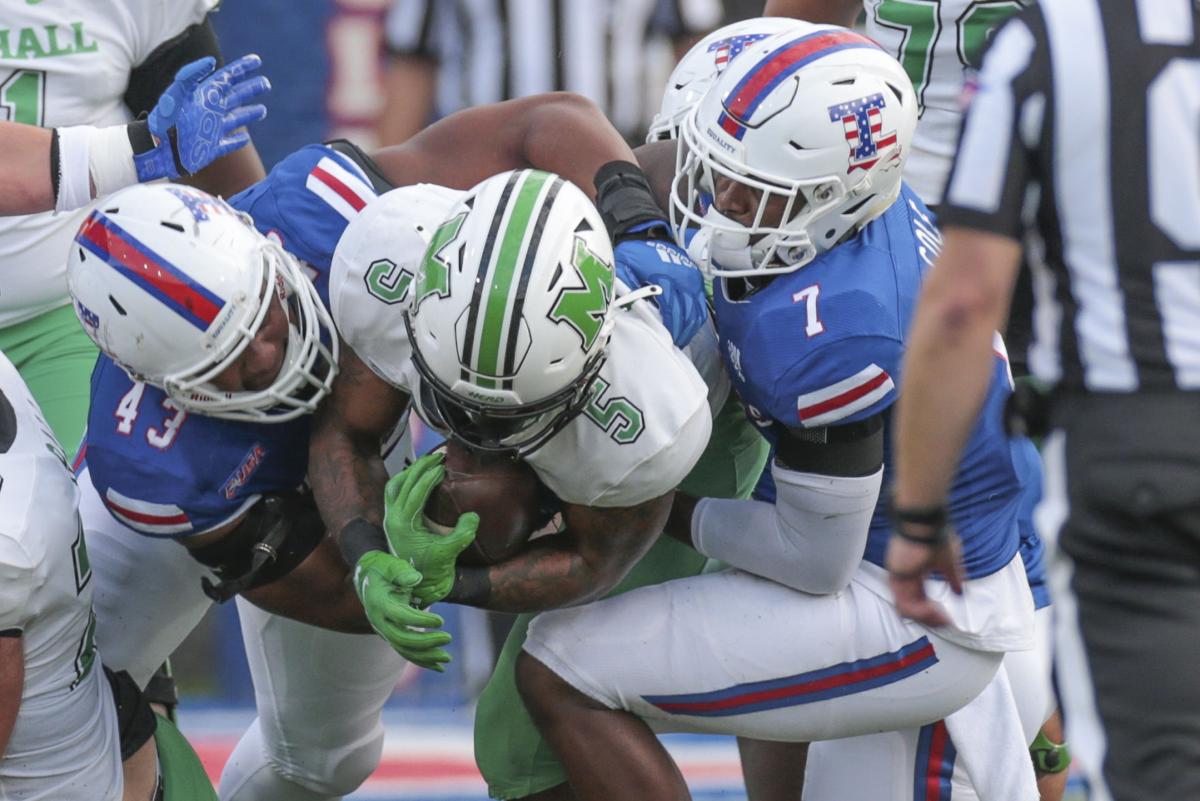 Marshall Thundering Herd running back Sheldon Evans (5) is sandwiched between Louisiana Tech Bulldogs defensive lineman Tristan Allen (43) and defensive back Jaiden Cole (7) during an NCAA football game between the Herd and Louisiana Tech on Saturday, Oct. 17, 2020, at Joe Aillet Stadium in Ruston, La.

Marshall Thundering Herd running back Brenden Knox (20) scores a first-half touchdown during an NCAA football game between the Herd and Louisiana Tech on Saturday, Oct. 17, 2020, at Joe Aillet Stadium in Ruston, La.

Marshall Thundering Herd quarterback Grant Wells (8) passes the ball during an NCAA football game between the Herd and Louisiana Tech on Saturday, Oct. 17, 2020, at Joe Aillet Stadium in Ruston, La.

Marshall Thundering Herd running back Sheldon Evans (5) is sandwiched between Louisiana Tech Bulldogs defensive lineman Tristan Allen (43) and defensive back Jaiden Cole (7) during an NCAA football game between the Herd and Louisiana Tech on Saturday, Oct. 17, 2020, at Joe Aillet Stadium in Ruston, La.

On Saturday afternoon, Holliday watched his Herd team get tough in big situations, using a goal-line stand at the end of the first half and registering six sacks to help propel a 35-17 win over Louisiana Tech at Joe Aillet Stadium in Ruston, Louisiana.

“When you hold somebody to seven yards rushing, you played great defense,” Holliday said. “Obviously, we did that and offensively, we had some guys that stepped up there and played — they probably didn’t think they were going to play, but they played extremely well.”

While the defense continued its strong play that has led the team early in the season, the Marshall offense featured a balanced attack with quarterback Grant Wells and running back Brenden Knox each seeing success.

Wells finished the game 19-of-24 for 222 yards with two touchdowns and one interception, while Knox carried the ball 32 times for 125 yards and two scores — his second straight multi-score game.

Knox said the key to Marshall’s offensive success was being patient and taking what was given. The Herd parlayed that into a 13-of-16 performance on third down.

Marshall (4-0, 2-0 C-USA) rode those jabs to a 21-3 lead early in the third quarter, but Louisiana Tech used a pair of big plays, including a 12-yard fade from Luke Anthony to wide receiver Adrian Hardy, to cut the deficit to 11 points.

That is when Wells threw a pair of haymakers of his own to put the game out of reach.

Wells connected with Artie Henry on a 46-yard touchdown pass to stretch the lead before putting the exclamation point on the win with a 26-yard scoring toss on a third-down play to Corey Gammage, who finished with 65 yards on a team-high five receptions.

Third downs were the key to the game on both sides for the Herd.

While the offense took care of its end, the defense did the same as Louisiana Tech converted just one of 10 third-down chances.

The Herd kept Louisiana Tech to just seven yards rushing for the game, marking the fourth time in four games that the opposition has not reached 100 yards on the ground.

Holliday said forcing the opposition into a one-dimensional attack led to the strong defensive performance.

“We’ve had the opportunity to make teams one-dimensional,” Holliday said. “We’ve stopped the run and obviously we got pressure on the quarterback.”

The game turned in Marshall’s favor thanks to a big momentum play just before halftime by the defense who stopped Louisiana Tech running back Justin Henderson twice with the Bulldogs inside the 1-yard line.

On the first play, Tavante Beckett stuffed Henderson, who had tried to go over the pile for the score. The stop forced Louisiana Tech’s last timeout.

Instead of a short field goal, Louisiana Tech head coach Skip Holtz opted to go for the score, which would have cut Marshall’s lead to four points with the Bulldogs getting the ball out of the break.

However, Marshall linebacker Eli Neal got penetration for initial contact of Henderson before Jamare Edwards finished him off.

“There’s no question that was a huge play and what a great job that defense did,” Holliday said.

It was part of an impressive first half for the Herd, who started the game with an interception by Neal on the first offensive play for the Bulldogs. The play came after Darius Hodge got around the edge and got a hand on Louisiana Tech quarterback Luke Anthony as he released the football.

Neal said he only had one thing on his mind as the ball floated his direction.

Neal’s interception came after Marshall turned the ball over on downs at the Louisiana Tech 36 — the first time in 2020 the team did not score on its opening drive.

Marshall shook that turnover off, cashing in on Neal’s takeaway with a 1-yard plunge by Wells to take an early 7-0 lead.

Louisiana Tech used a pair of pass interference penalties on the Herd to get a 35-yard field goal from Jacob Barnes, but the Herd answered with a 12-play, 85-yard drive that chewed up over six minutes off the clock and ended with Knox’s 1-yard score.

Anthony finished 18 of 25 for 180 yards with a score and an interception for the Bulldogs, who fell to 3-2 overall and 2-1 in Conference USA.

With the win, Marshall moves to 4-0 for the first time since 2014 — the last time the Herd won a Conference USA Championship.

Next week, the Herd is scheduled to host Florida Atlantic — the reigning Conference USA champion — for homecoming at 2:30 p.m. Saturday at Joan C. Edwards Stadium.